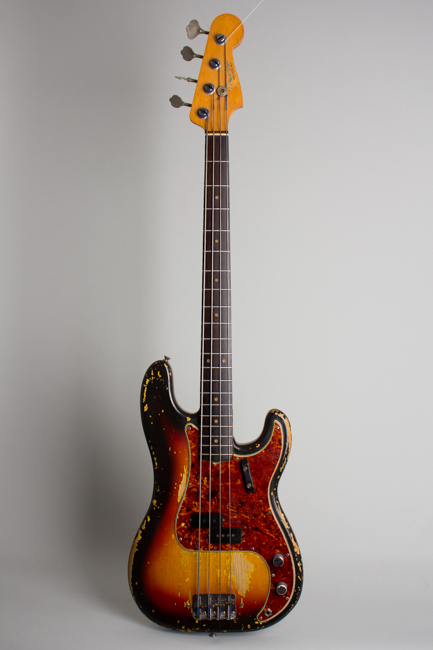 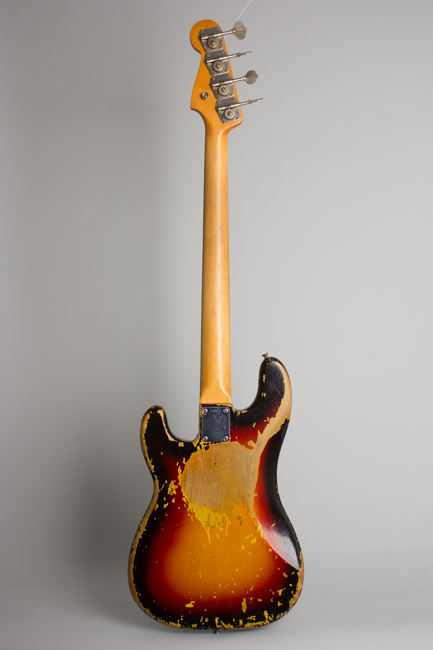 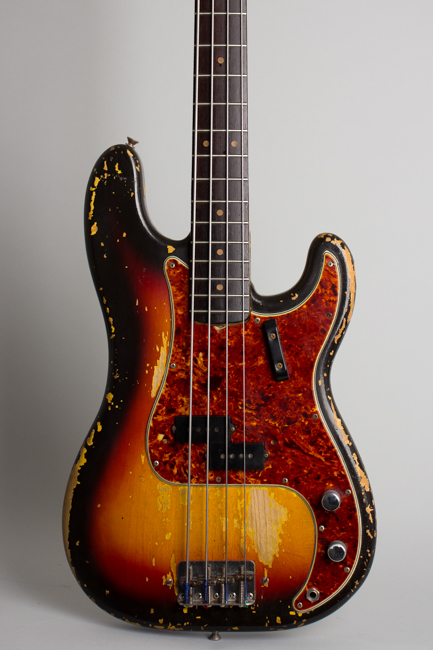 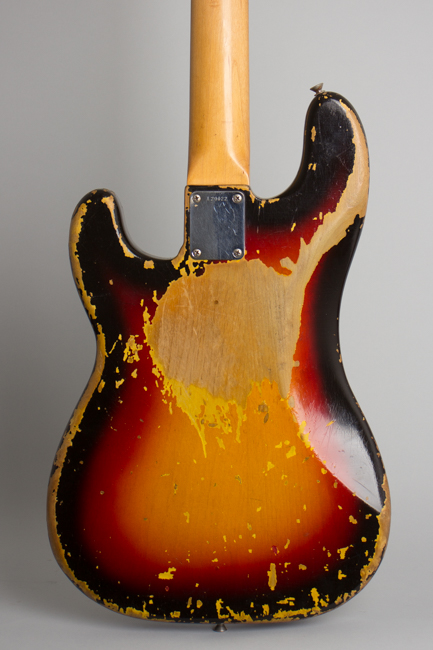 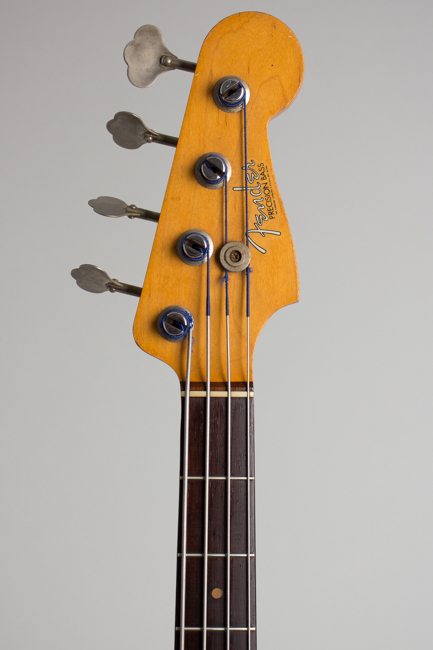 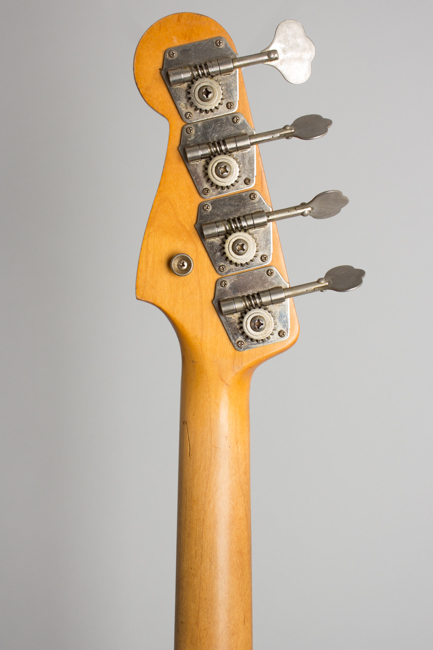 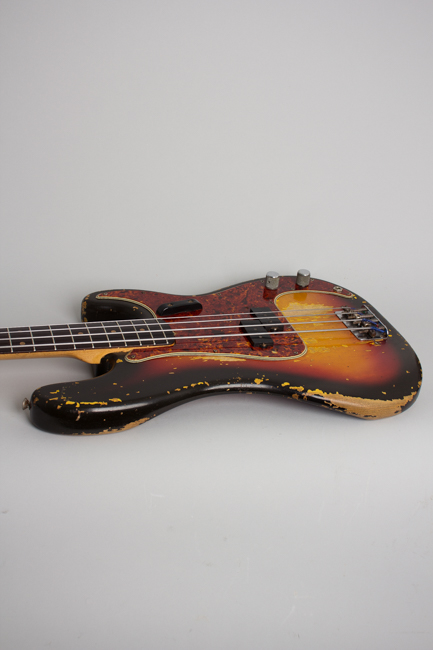 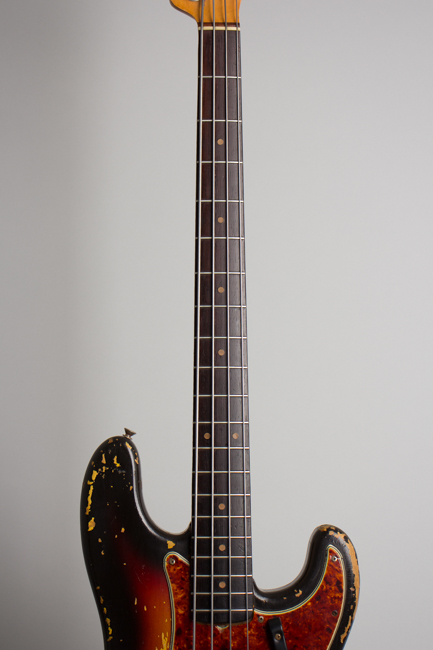 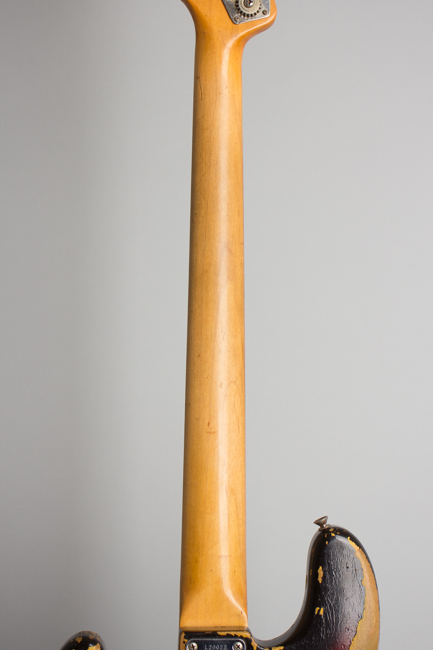 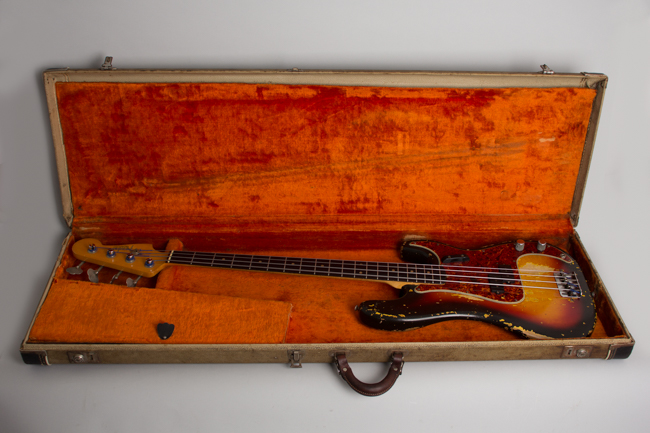 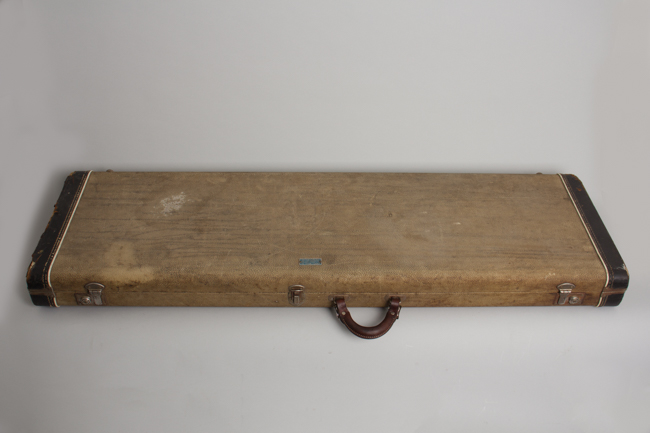 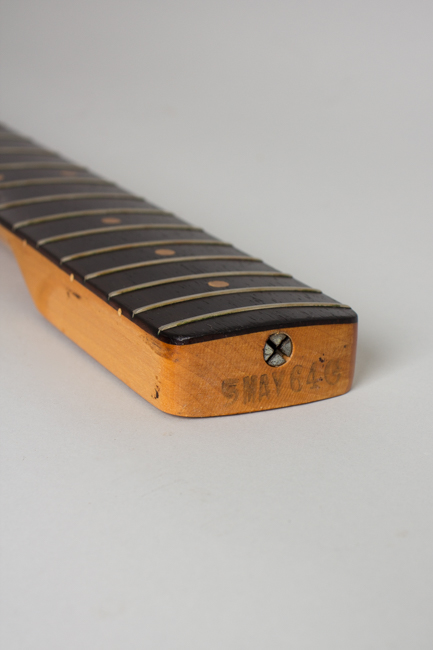 So you want a relic, huh? This 1964 Precision bass is as real as relics get, the product of what would appear to be a lifetime of gigging and probably thousands of shows. Beneath the considerable wear this is a truly lovely pre-CBS Precision, with the look, feel, and sound that defines the classic '60s Fender bass. The features particular to this period include a thin rosewood fingerboard with clay dot inlay, "Spaghetti" silver Fender logo decal, tortoiseshell pattern thick nitrocellulose pickguard and Kluson bass tuners. The neck and body are finished with the thin Pre-CBS style lacquer in a blended sunburst finish a bit mellower than the "target" bursts of 1965 and after.

The bass was assembled right in time for summer '64, just six months before the CBS takeover. The neck heel is stamped 5 MAY64C, the tone pot is coded to the 20th week of that year. The volume pot was replaced decades ago, all other parts remain original. It has obviously seen a tremendous amount of use over 55+ years but remains more original and better preserved than many Fender basses from this period that have often been stripped, modified or heavily rebuilt. It has the classic Precision sound with a bright midrange growl that warms up nicely when the tone knob is rolled off a bit. At 8.75 Lbs. this is fairly light for a Precision Bass, with a superbly resonant sound even unplugged.

This is simply a great player's example of the world's premier electric bass, still ruler of the roost 55+ years on and ready for the next half-century of low end action. This era Precision Bass is an absolute classic, played by the majority of the great electric bassists of the 1960s and heard on literally thousands of recordings since then. This bass is a true relic, worn by decades of use, not workers with hammers and sandpaper. The case has a small plaque from a music store in Bangor, Maine and as far as we know the bass stayed in that area since new. It remains a wonderful instrument for any style of music, an absolute joy to play and a prime example of the final; glory days of the Fullerton California Fender factory.

This bass is worn *everywhere* but remains in excellent playing condition with all original hardware and finish, except for the one changed volume pot that is a DiMarzio from the 1980s. The only missing parts are the chrome covers were removed and likely lost long ago, there is no noticeable finish fade around the bridge where one once sat. The all-original finish has heavy typical play wear EVERYWHERE with dings, scrapes, chips and deeper wear spots into the wood on the back and face under the strings. The back of the neck is perfectly worn down to the wood with the classic "old Fender" feel. There is one feelable scratch behind the first fret, otherwise it is smooth.

Amazingly what remains of the sunburst is bright and mostly not too faded, despite probably being played in smoky bars in decades past. The parts have some wear and corrosion but everything works as intended. This bass has just been PLAYED for a lifetime as they used to say "someone fed their family with this one". The original frets show surprisingly little wear, they have been crowned down a bit but we would assume the bass has likely had flatwound strings on for most of its life. The neck is excellent, the truss rod works fine and has never been over-cranked, "bassically" This Fender took a lickin' and kept on tickin'"

While cosmetically challenged as a player this is simply a superb example; medium/light at 8.74 lbs., perfectly balanced, and one of the nicest feeling and sounding Precisions we have had in a long time. It is housed in the original white Tolex Fender case, dirty, battered and worn all over but still intact and functional. Included is an old rainbow strap that looks to have been with this bass for decades. All in all a 4-string package with a great history and plenty of life left in it. Very Good + Condition.
×