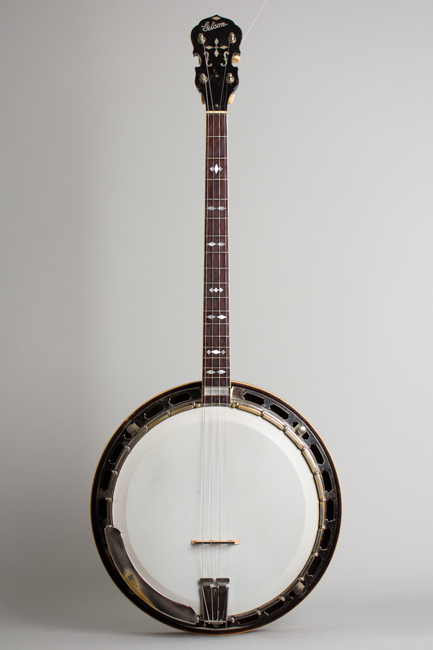 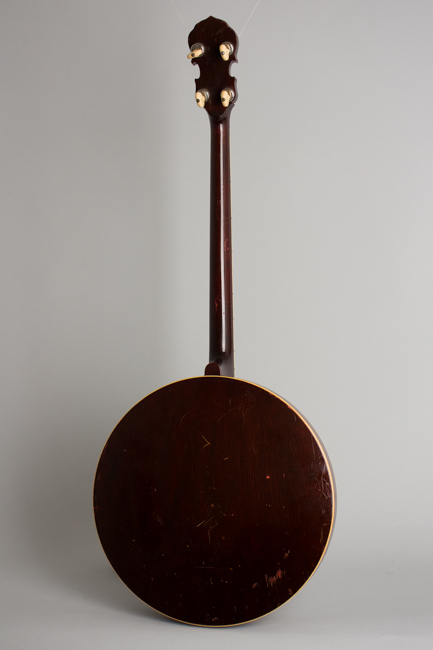 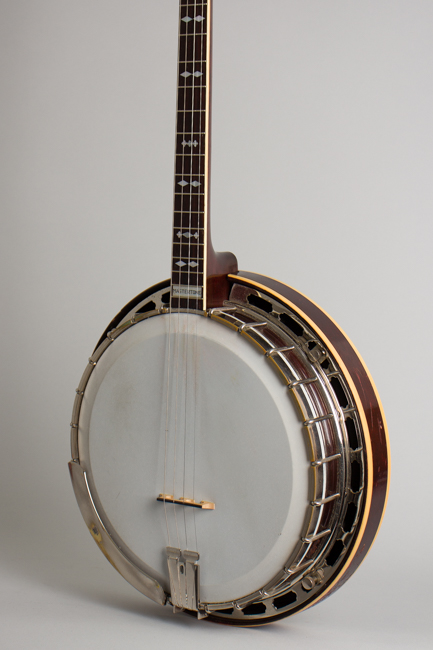 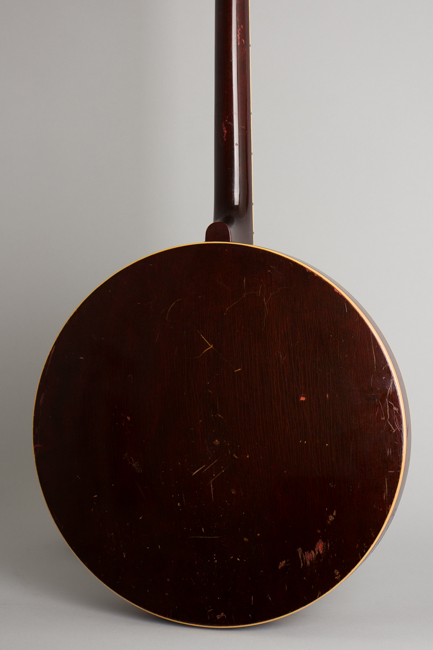 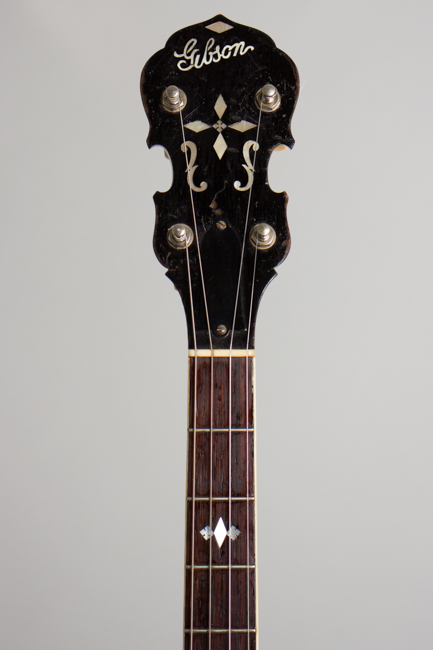 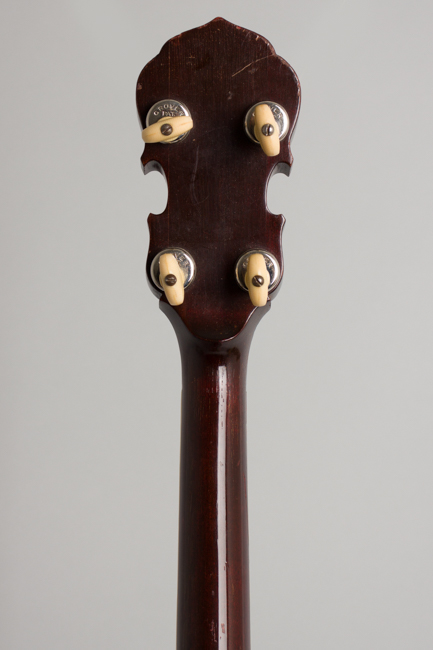 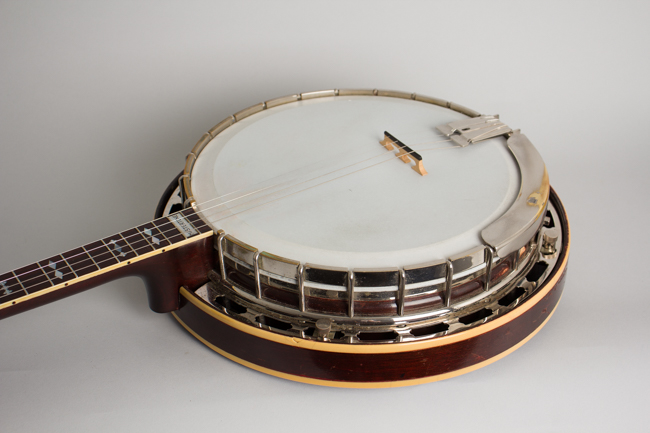 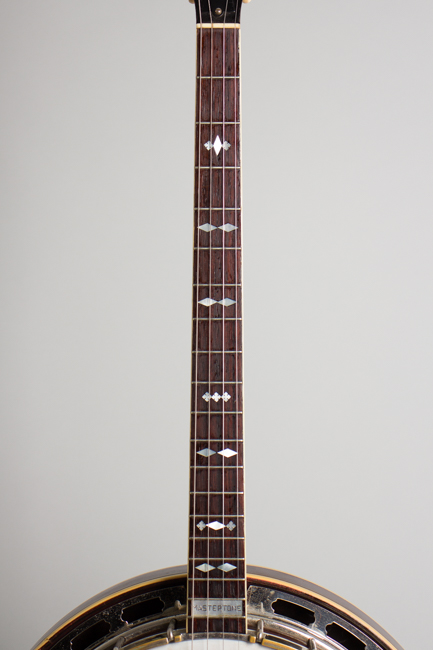 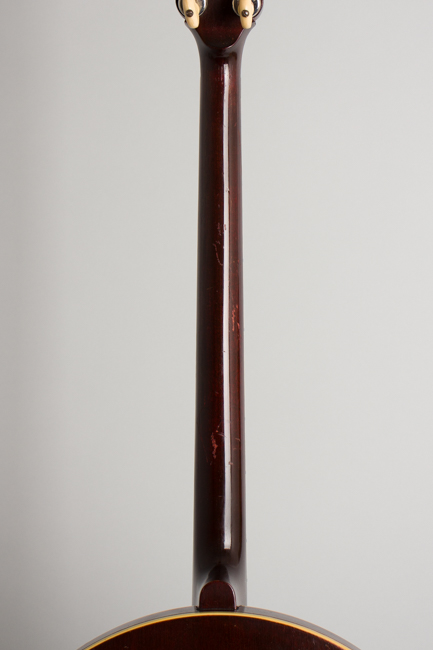 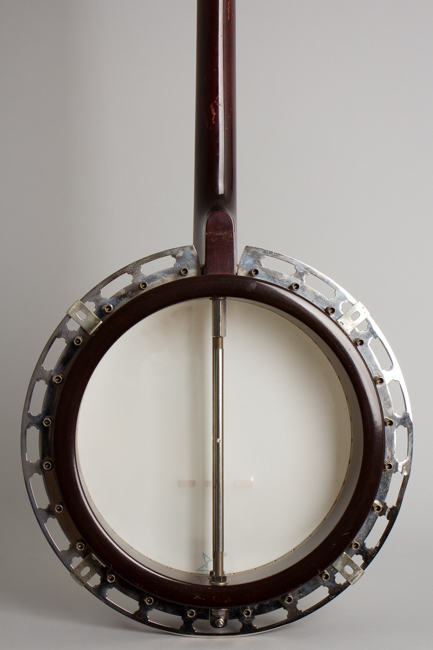 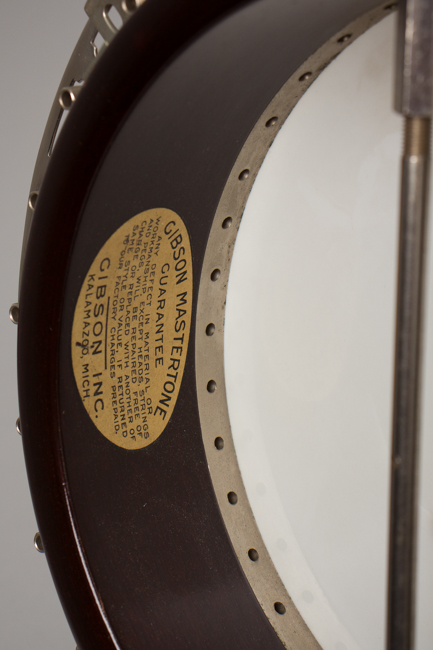 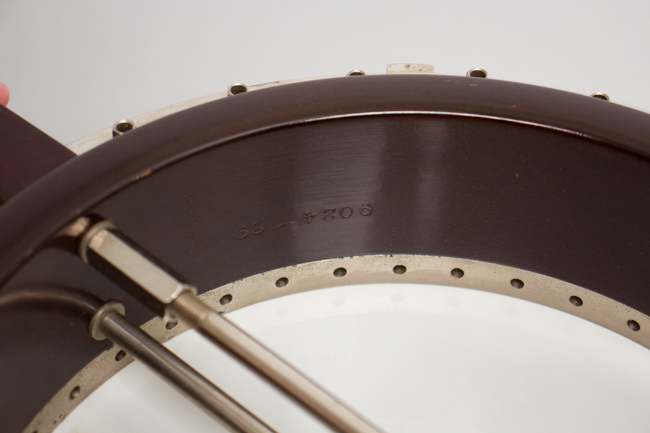 The later 1920's Mastertone TB-3 was Gibson's most popular professional tenor banjo, a medium/fancy instrument at an affordable price and a Gibson classic. The TB-3 was the least expensive instrument equipped with the full professional Mastertone flange, resonator, and tone ring hardware package. The resonator is bound on both edges, and the Gibson twin coordinator rods are installed inside. The 1928-era tone ring is a solid 40-hole arch-top piece, considered a huge improvement on the earlier ball bearing style. This is coupled with the 2-piece tube-and-plate flange in use at the time. While this combination is not as sought after by Bluegrass players this flange remains higher quality example of metalwork than the one-piece cast unit that replaced it a year or so later.

The slim mahogany neck has a bound rosewood fingerboard ornamented with the simple but effective diamond pearl inlay motif that is one of Gibson's classic looks. The headstock has a script Gibson logo and small filigrees in pearl. All hardware is chrome plated, considered an extravagance at the time. The TB-3 cost $150 in 1928, not an extravagant price for a 1920s tenor banjo but still an expensive proposition for many players. While not particularly rare instrument the "working man's" Style 3 is getting harder to find today as over the last 6 decades large percentage of them have been used as the basis for 5-string conversions. This example retains its original tenor form and still plays and sounds excellent.

This TB-3 has long been a working instrument (most recently in a Broadway pit mode) and shows some wear and tear, but retains its original finish and most parts and is a very good player. The finish has dings, dents and scrapes most notably to the back of the resonator; the back of the neck has some fairly minor wear with some scrapes and dings but nothing too serious.

The hardware remains original except the tailpiece, which is the correct Grover Presto style but more recent and is missing the hinged cover. The original armrest has a repair to the stem and wear through the plating on the top. The original Grover "pancake" tuners are intact, as are all four resonator retaining bolts. The plating is decently preserved overall with some typical wear, down to the brass on the front edges of the hoop.

The banjo took a small hit on the top edge of the resonator long ago; there is a small repair to the binding and some minor bending to the flange. If this had been the later cast one-piece flange it would likely have gotten shattered! At any rate this causes no ongoing issues, The frets and fingerboard have only minor wear and this is an excellent playing and sounding TB with quite a powerful punch. It resides in a later black Tolex HSC with some typical road wear but solid. Excellent - Condition.
×