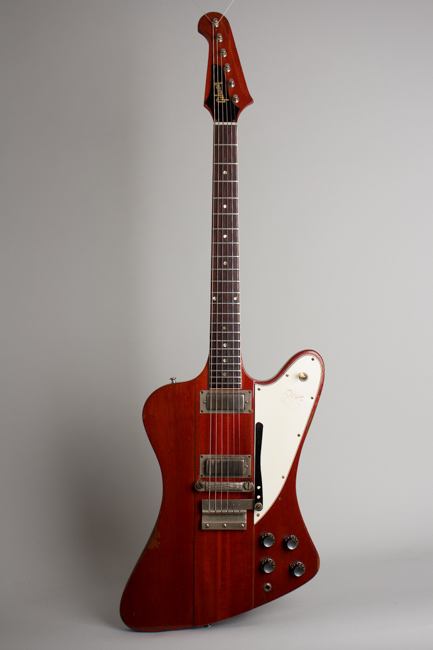 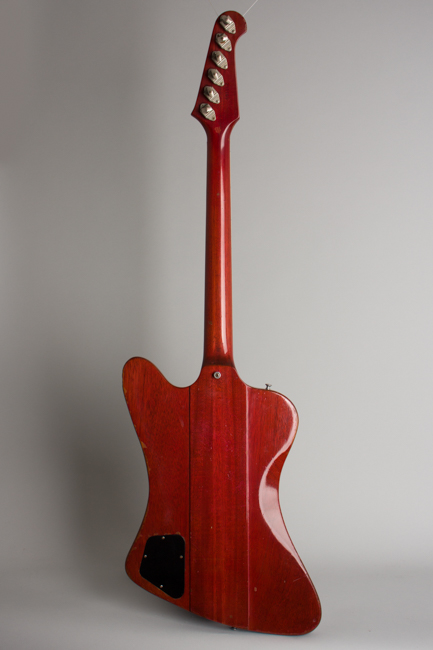 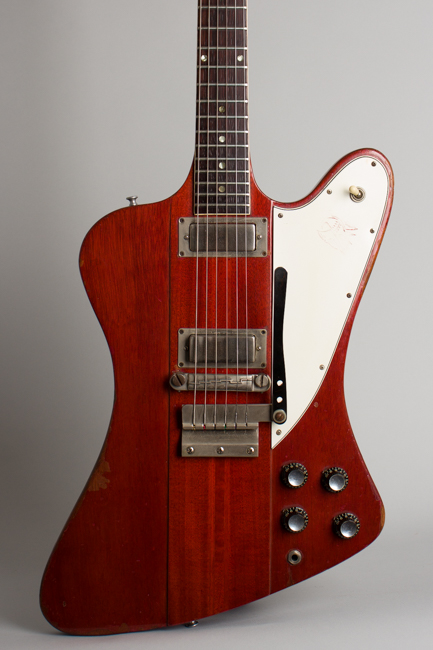 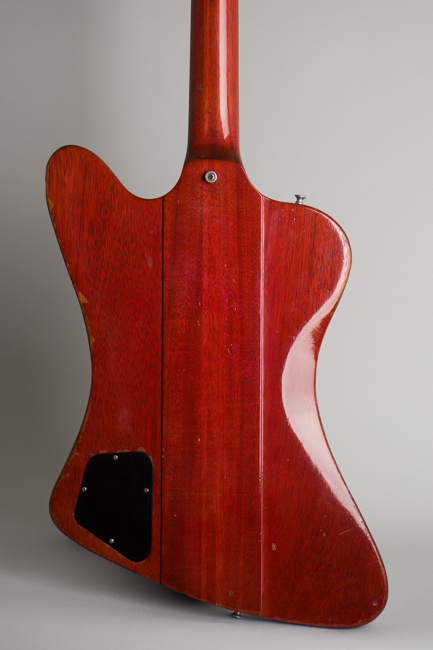 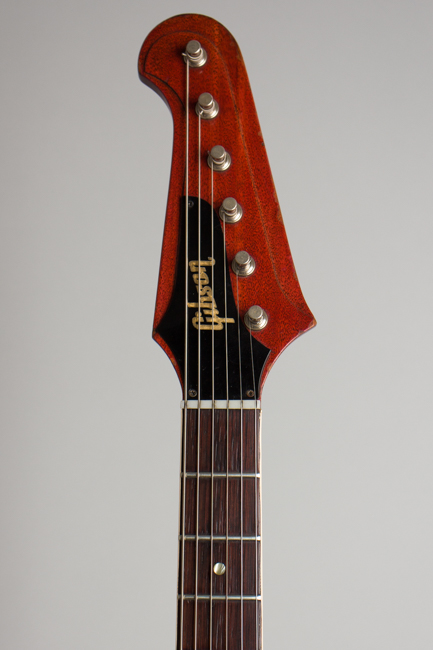 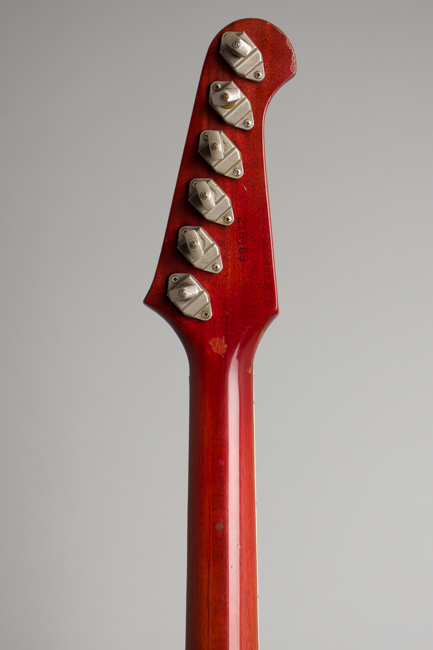 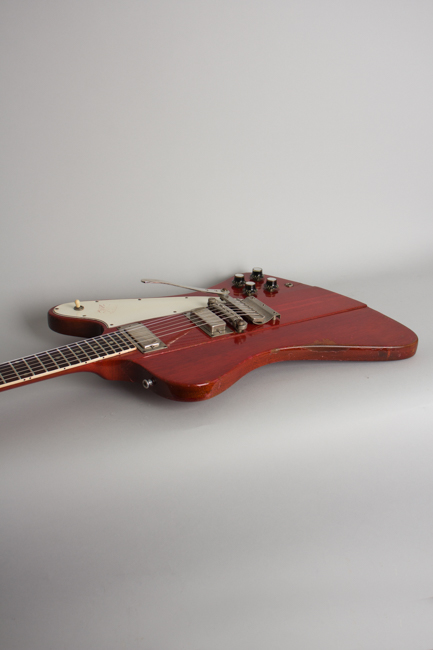 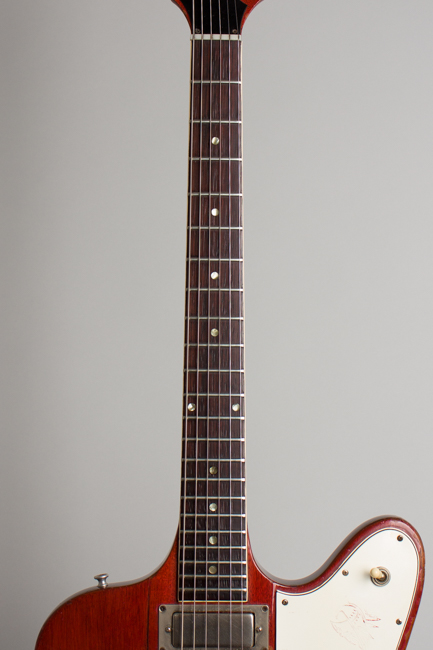 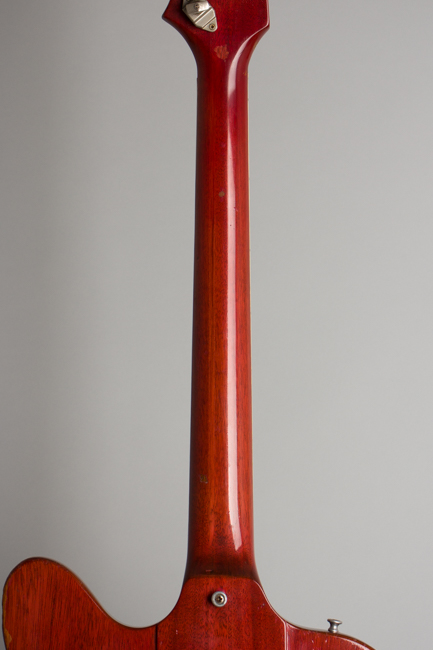 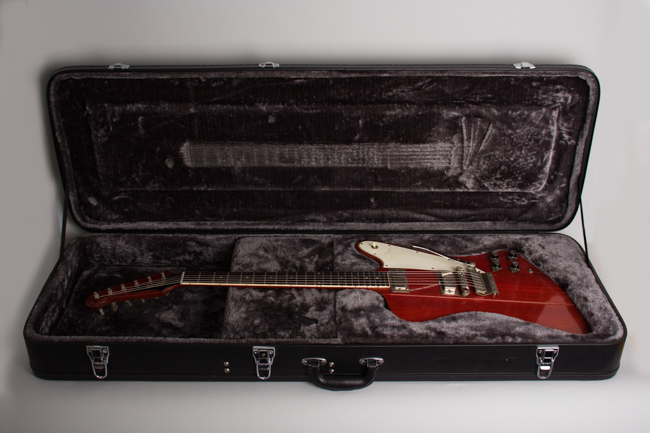 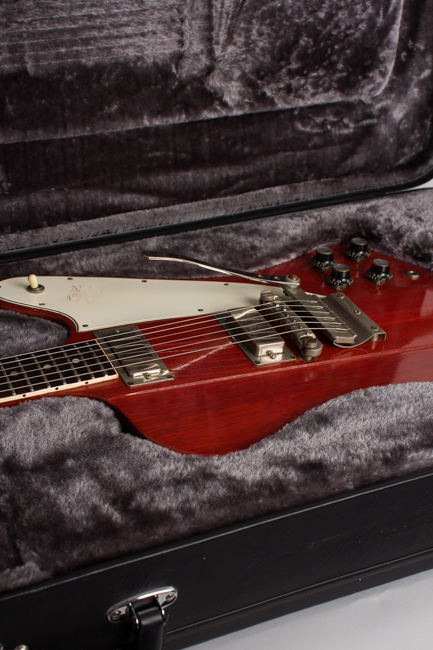 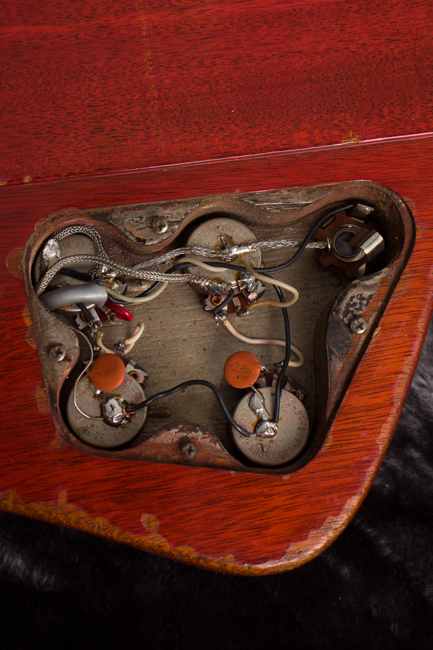 This guitar is an extremely rare variation of the original "reverse" body Gibson Firebird series, a cherry finish Firebird III. The entire 1963-65 Firebird line was offered in a somewhat conservative dark sunburst finish, but with the option of a palette of flashier solid-color custom finishes as extra-cost options. In practice these were rarely ordered, and the great majority of extant Firebirds are sunburst. This guitar is an outlier even from the officially offered options, finished in the cherry red that was standard on the SG line but never listed as available on Firebirds. A very small number of these are known to exist, usually III and V models that would have been special customer or dealer orders. The solid color finish very effectively shows off the body's fluid lines, while the see-through red highlights the mahogany grain and laminated through-neck construction.

The Firebird III was the mid-line model of the original 'birds, medium priced but with professional features. The bound, dot inlaid fingerboard is the defining element as much of the layout is otherwise shared with the next model up, the Firebird V. The neck is usually a bit bigger than the contemporary SG series with a comfortable round-backed profile and faired-in heel. This one feels slimmer and flatter back-to-front then some '64s and is superbly comfortable, a bit reminiscent of some 1960-62 style Gibson necks.

Fittings include the two special Firebird mini-humbucking pickups in flat metal mounting rings, a short Vibrola tailpiece, solid stud-mounted compensated bar bridge and the unique "backwards" headstock with individual Kluson banjo tuners. The hardware is nickel plated. The white laminated pickguard covers just the lower body horn and carries the selector switch; it is decorated with a nifty Firebird emblem which on this guitar has seen the paint pretty much rubbed away, though the delicate outline is still visible.

Practically everything about the original Firebirds was unique; the long laminated neck-through-body centerpiece with "wings" glued to the sides, the fluid body shape with the longer lower cutaway horn and that headstock with the tuner buttons hidden from the front with the low E farthest from the nut. They hardly had a chance to catch on with players before being drastically revamped. A threatened lawsuit from Fender is often cited as the reason, but more likely the complex design proved uneconomical to produce. The elaborate sculpting of the body and headstock and the eccentric neck-through construction make for a beautiful instrument, but one that proved difficult for Gibson to build on a cost-effective basis.

As a result this unique line was originally sadly short-lived, first shipped in late 1963 and discontinued after the mid-1965 NAMM show. The original pattern Firebird is considered a Gibson classic with its futuristic sweeping lines and innovative through-body neck construction, but the limited production time meant they barely had a chance to catch on before being replaced by the more conventional "non-reverse" versions. The originals have been a sought-after guitar since, re-issued, revamped but never really equaled in the Gibson pantheon.

Despite use with a number of major bands of the day (including the Rolling Stones. Four Seasons, Merseybeats and briefly the Lovin' Spoonful) these beautiful birds flew off into oblivion way too quickly. It's estimated that about 2000 of the original "Reverse" Firebird III were produced between late '63 and mid '65; only a miniscule proportion, a handful at best, would have been finished in this cherry red. This one has seen some moderately heavy use but has never suffered the common cracks in the headstock area. This cherry red 'bird is one of the rarest variations, well played but a splendid survivor as well as a great all-around guitar with a unique look and fantastic sound.

This guitar shows general wear overall; it has definitely been well played but remains nicely original with one minor repair to the body, none to the neck and no notable alterations. The finish shows some minimal checking but general wear and tear with chips, scrapes and dings, most heavily on all the body edges. There is an area of finish chipped away on the upper edge of the face where a player's arm rested. The front edge of the lower body horn is heavily worn down into the wood, probably the result of traveling in an ill-fitted case long ago. There is some light buckle wear on the back and random chips and dings. The back of the neck is cleaner than one might expect with a few noticeable chips but no larger wear areas through the lacquer; the headstock has rub wear to the edges a few dings and chips.

The most common Firebird malady is absent -- the neck has NEVER been cracked or broken. There is a small typical repair through the rear edge of the body, running back from the top edge of the jack. This has been sealed solidly with no added finish and is not an ongoing issue. There is very minor typical pickguard shrinkage, but none of the screwholes are cracked or broken; this 'guard is really in better shape than most. The engraved and painted bird emblem on the pickguard has lost much of its red pigment but the outline is still strong. The nickel plating shows typical wear but remains largely intact if somewhat muted, with some typical rubbed-away spots from contact with players' hands.

The guitar is all original and complete except the "spoon" vibrato arm, which is correct 1960's period but a bit later as it is chrome plated. Its mounting screw is an old generic replacement, the nylon bushings appear correct. The original large frets have been crowned down just a bit, they and the fingerboard have some light wear but this is a truly excellent player, with the typical snarly Firebird sound. It is lighter than some at 8.25 pounds and rings for days, even when not plugged in. This is not the cleanest but definitely the rarest Reverse Firebird we have had, and feels like the best players' example of this a great sounding and super stylish Gibson classic we have ever handled. Excellent - Condition.
×