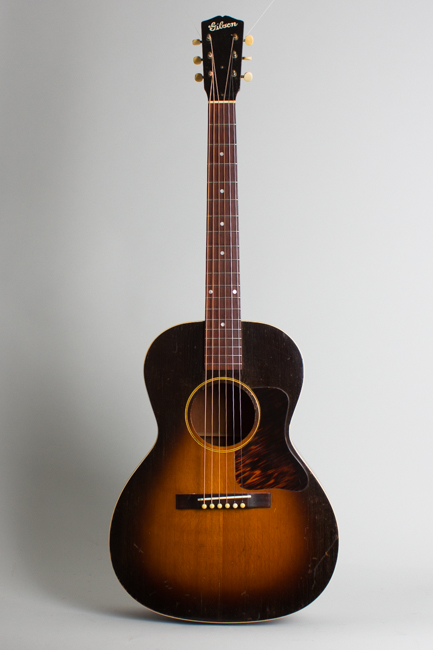 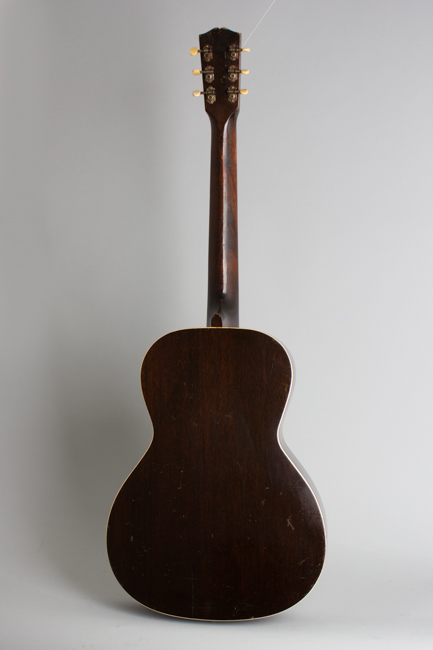 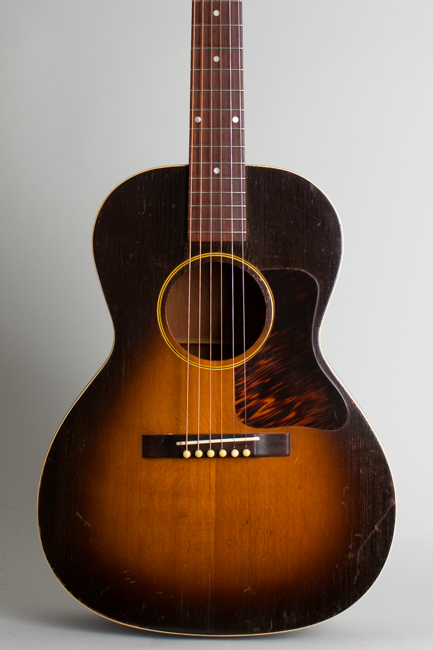 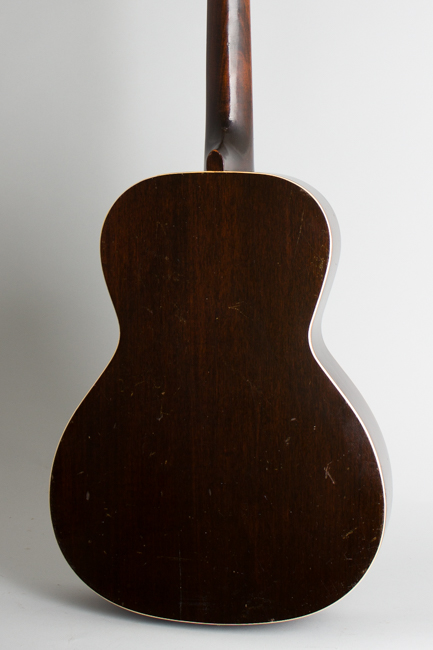 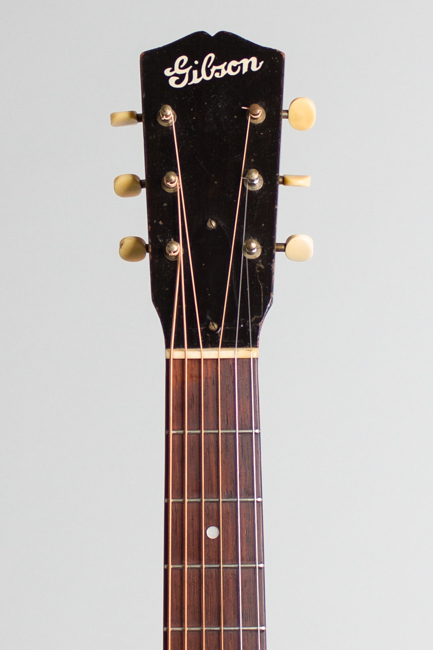 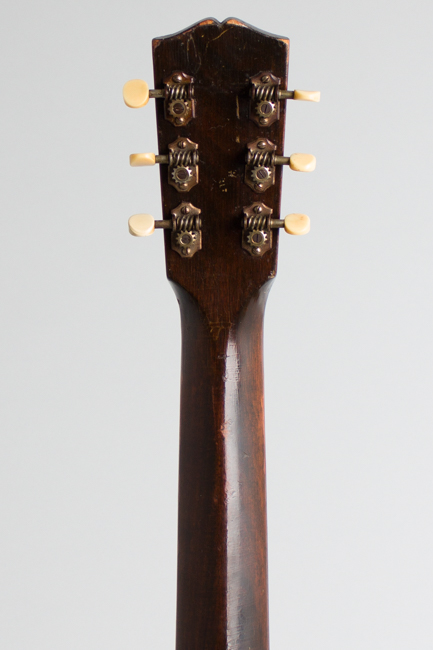 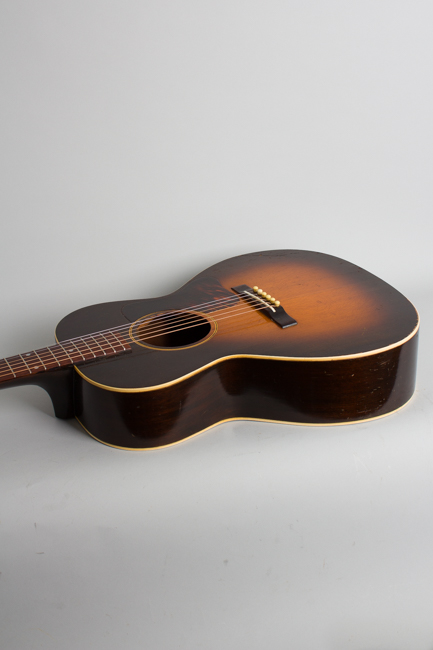 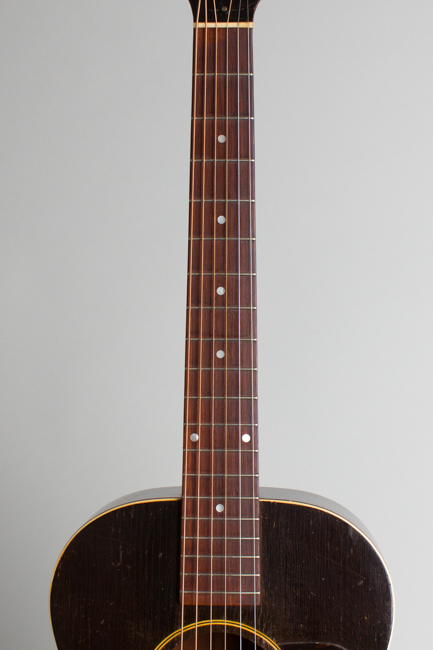 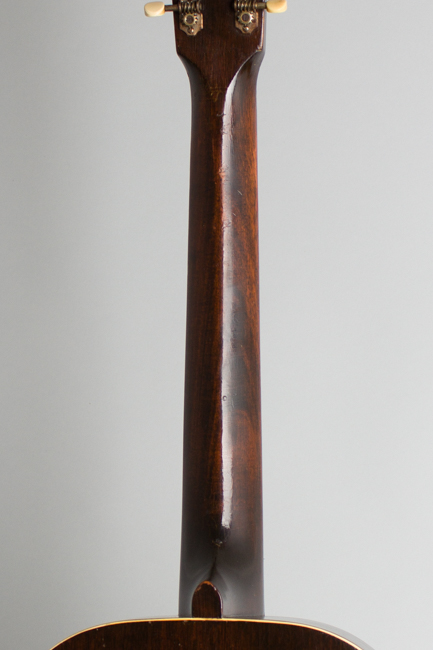 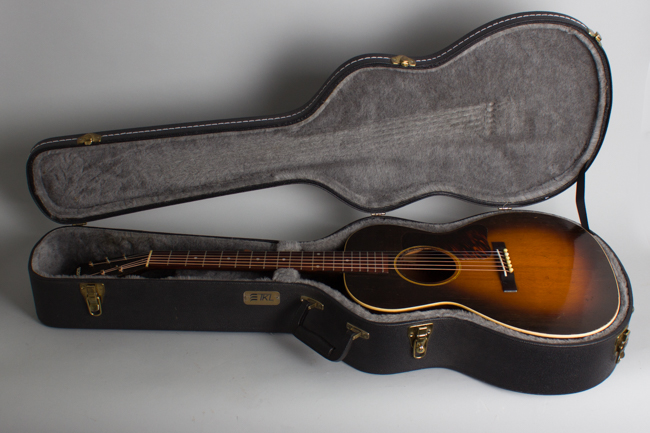 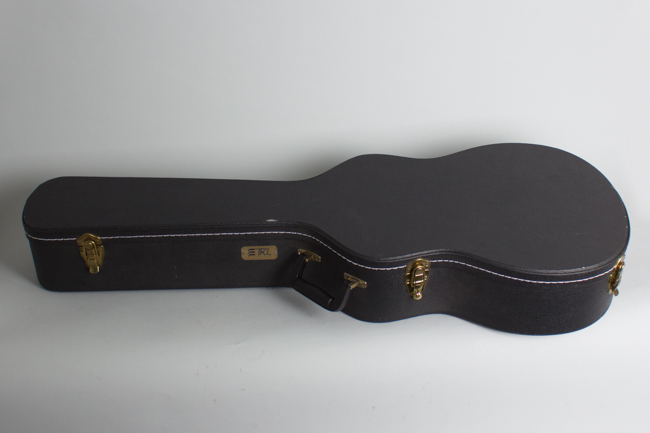 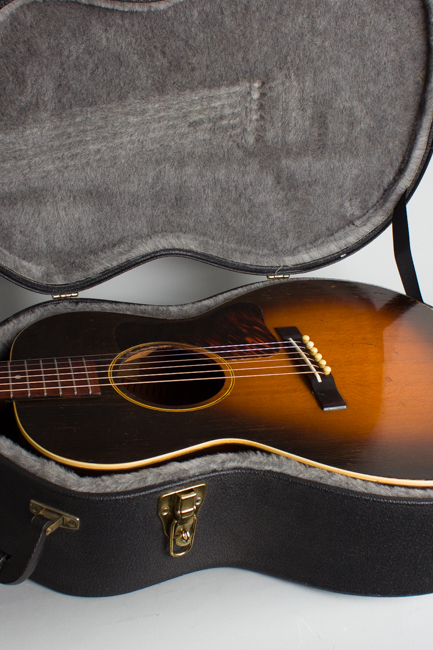 When this lovely mid-'30s Gibson arrived, we instinctively marked it down as yet another early 14-fret L-00, Gibson's most popular Depression era flat top. While the L-00 stood at the bottom of the company's guitar line, in 1934-5 there was a model directly above it, carrying the older the L-1 designation. The differences? Binding on the back, individual Grover tuners and white bridge and endpins, which Gibson collectively valued at a $10.00 upcharge! Sure enough, this guitar is one of those last L-1's, bound on the back, with individual machines and amazingly enough still retaining the original ivory celluloid pins.

Unsurprisingly most depression-era customers did not see much advantage in a $37.50 L-1 when the L-00 could be had for $27.50; both were very well-designed and offered a great value in sound, but in 1935 10 bux was a LOT of money to many folks. The L-1 last appeared in Gibson's 1934-5 catalog W; By catalog X it was gone, leaving the L-00 to carry the lower end by itself. Just to confuse the world further, a year or so later Gibson added back binding to the L-00, and reintroduced a "new" model with an unbound back, now designated the L-0. But that's another tangent...

Getting back to this guitar, the FON code 491-A on the heelblock indicates it was built in early-mid 1935, likely one of the final L-1 batches (Spann records show one more run at FON 1294 but those are not a complete tally). The top finish is a fairly dark sunburst with a deep orangey center, somewhat larger than the year before. There is single-ply white celluloid binding around the top and back. The spruce top is ornamented with a "firestripe" tortoise celluloid pickguard and three-ply sound hole ring. The back and sides are finished in dark mahogany as is the "V" profile neck with an unbound rosewood fingerboard. The headstock carries a white stenciled "Gibson" logo on the face and individual Grover tuners with plastic buttons, the one higher grade fitting than an L-00 that might make a functional difference. The original rosewood bridge does not have any bolts with pearl dot caps.

Like the far better remembered L-00 this model was intended for student customers but prospered as a professional grade guitar affordable to blues players, Hillbilly string bands, and many other itinerant musicians. Each one of these small body pre-war guitars has its own character and this one is just a honey; great-sounding both finger- and flat-picked, with a powerful ringing tone that never gets harsh. This is nice "not too clean, not too whupped" with enough wear to be played without worry.
Many of these pre-war Gibson flat-tops have been more heavily used and often amateurishly repaired while this one has sailed through eight decades still intact and singing.

This beautiful L-1 shows its age but is still a gem both to play and hear. The completely original finish has a decent amount of the typical checking, edge wear, dings, dents and scrapes but no larger areas of loss. The top has some fairly heavy checking, most notable on the lower treble bout where there is also one conspicuous deep scratch. The back is far less worn than many with dings and dents but none of the common belt buckle wear. There is some minor lacquer wear-through on the back of the neck and small capo dinks, the headstock has chips and dings but again no large areas of wear. The original Grover individual tuners are still intact; Everything else on the instrument is also original, including even those "upscale" bridgepins and endpin.

The guitar is completely solid but there are some old repairs. There are two long spruce grain cracks between the bridge and bottom of the guitar, one behind the D string and one behind the high E. These are sealed solidly but not touched up so remain quite visible. There is a small sealed and cleated grain split off the treble side of the fingerboard to the soundhole rim. The back has a single shorter sealed grain crack off the back edge. The top is in excellent shape, with the light arching it was built with but none of the heavier bulge distortion these very lightly-built guitars often suffer.

The neck does not appear to have ever been reset. The original bridge looks to have been lowered just slightly some time back but never off or re-attached; it has a new bone saddle. The bone nut appears original; it has been shimmed slightly so it was removed at some point. Internally the guitar is very clean; the crack repairs are neatly cleated and the original small maple bridgeplate is intact and unaltered. The small-wire frets appear correct; these have been very well maintained OR this is the neatest and most period correct refret we have ever seen! The fingerboard shows hardly any wear. The action is very comfortable and this is a fine playing instrument, very responsive with an even but very punchy sound. Overall bit worn in but still a lovely example of this rare and mostly forgotten (even by us!) Gibson, in a modern HSC. Overall Excellent - Condition.
×