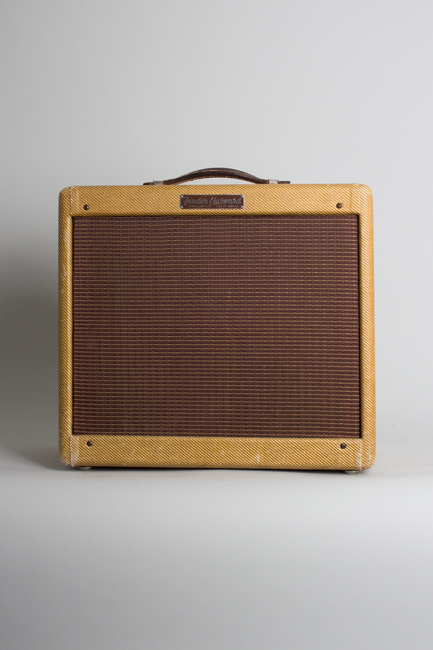 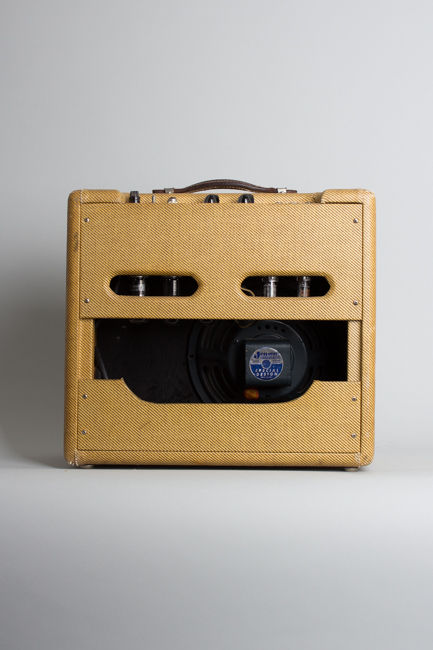 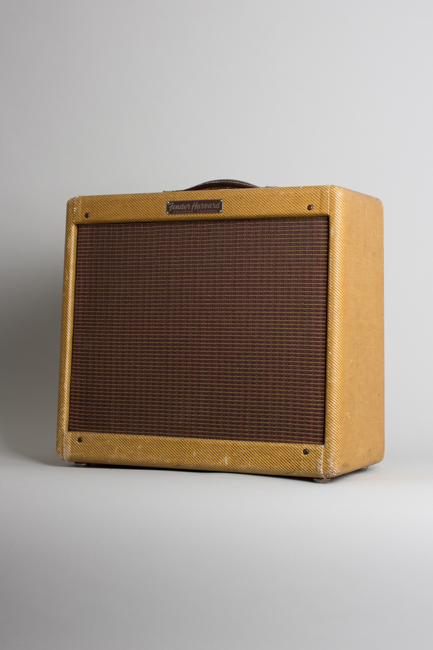 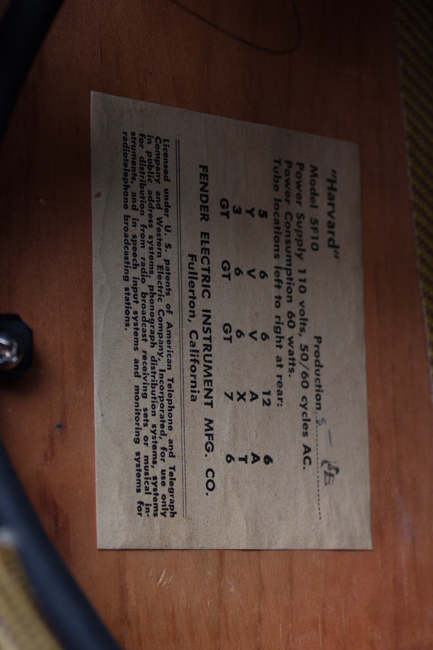 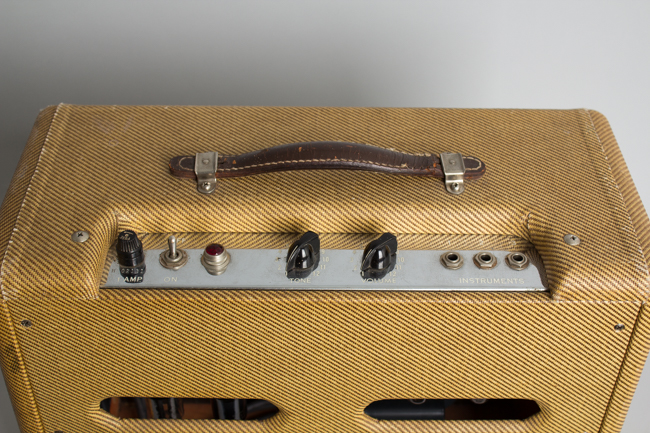 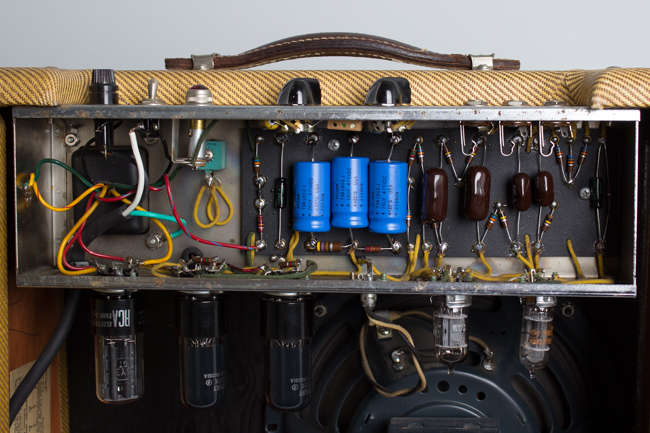 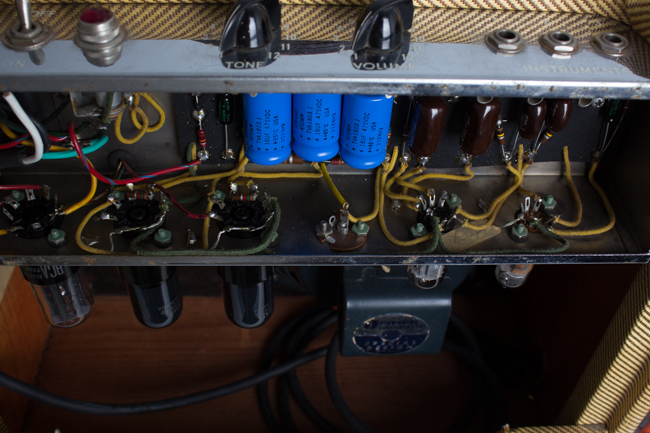 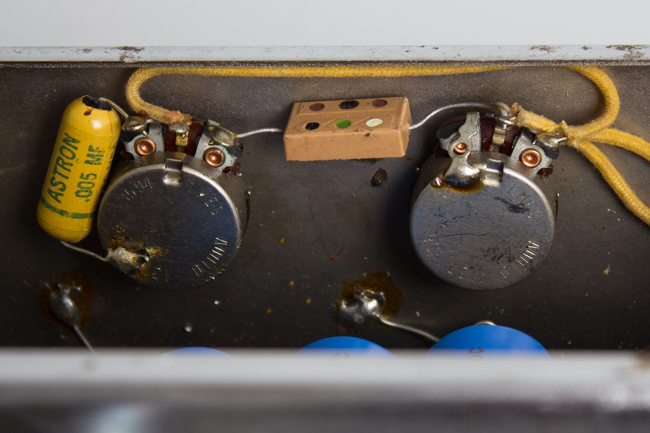 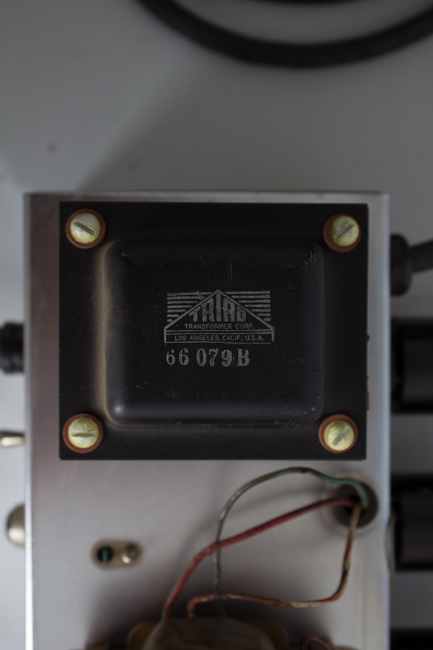 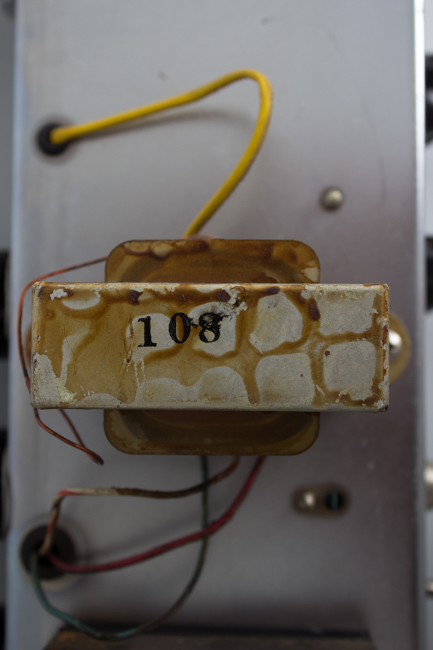 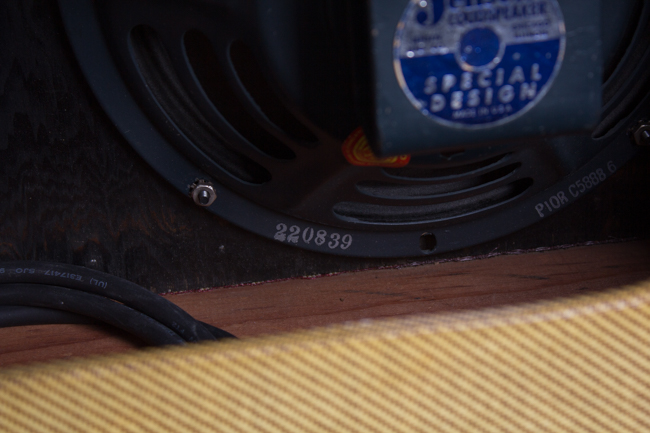 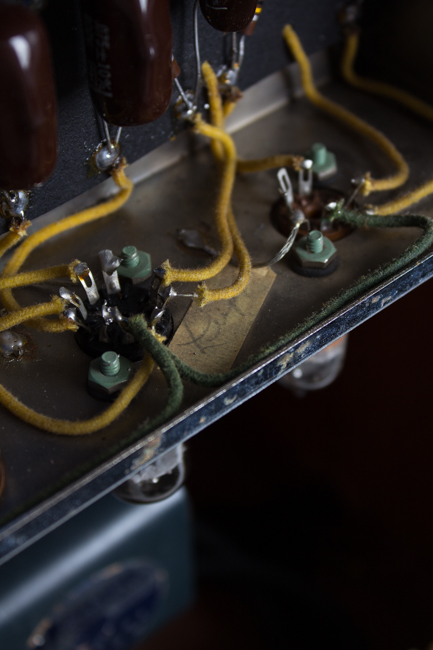 This tweed beauty is a stunningly well-preserved Fender Harvard 5F10 -- the Princeton's collegiate big brother and one of our favorite amplifiers. This is a near museum-quality example of the big-sounding "Steve Cropper Classic". It looks like it has seen only light use over 60+ years, unlike its brethren that worked for decades in recording studios and club and roadhouse stages. The tube chart has a stamped code of IE, indicating assembly in May of 1959. The piece of masking tape inside the chassis denoting which of the ladies at Fender wired it up is signed by Lupe. Nearly all the Harvards we have previously seen were wired by Lilly, whose impeccable work we venerate; we are pleased to say Lupe did an equally fine job on this one!

The Harvard was introduced in 1955, filling the gap between the 5-watt Princeton and the 15-watt Deluxe. The 5F10 circuit uses two 6V6 tubes in push/pull, yielding about 10 watts, with a 12AX7 phase inverter and a 6AT6 input tube. Its fixed-bias power section was only shared at the time by its nearly identical sibling of the following year, the Tweed Vibrolux. This gives the amp a tight low-end and more clean headroom than most Tweed Deluxes and a roaring and distinctive breakup.

Steve Cropper, Memphis session guitarist and member of Booker T. and the MGs famously used his Fender Esquire (or Telecaster) through a tweed Harvard amp on nearly every Stax hit of the 1960s. These ranged from the mellow arpeggios on Otis Redding's "I've Been Loving You Too Long" to the biting distorted riffing of "Green Onions" by Booker T. and the MGs. 60+ years on the Harvard remains truly as fine an amplifier of this configuration as has ever been made.

This Harvard is simply stunningly clean, both externally and under the hood. The old-style tweed covering is very clean with a lighter patina and only very minimal signs of wear to some of the corners. The grille cloth is original, taut and shows no signs of tearing. The faceplate is in stellar shape with only some minor surface scratching, most notably around the input jacks and around the controls. All the stenciled graphics are intact, however, and overall the faceplate retains its chrome-plated mirror shine. Even the somewhat fragile original leather handle is still completely intact, with plenty of life left in it.

Internally the amp is nicely original. The original Jensen P10R is stamped 220-839, dating it to the 39th week of 1958, with the original cone fully intact. Both the power and output transformers are made by Triad and are labeled 66079B and #108, respectively, the latter the same output transformer as used in many 5E3 Deluxes and 5E9/5G9 Tremoluxes. The visible date code on the volume pot dates it to the 6th week of 1959 (some of the numbers on the tone pot date stamp are soldered over). The amp has seen our typical maintenance and servicing, including replacement of all electrolytic capacitors, a grounded 3-prong power cord, cleaning of all sockets, pots and jacks as well as biased to spec.

Despite its stellar history the Harvard remains one of Fender's less well-known gems and a shop favorite here. This is easily one of the most perfectly undisturbed Harvard we have had, and one of the cleanest examples of this fairly rare amp we have ever seen -- an increasingly rare find well into the 21st century! Excellent + Condition.
×