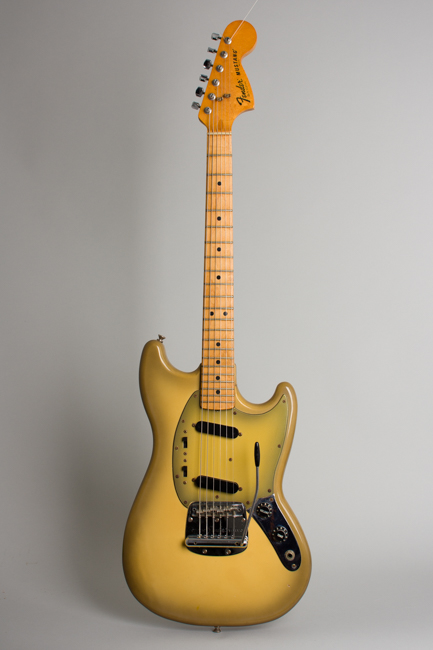 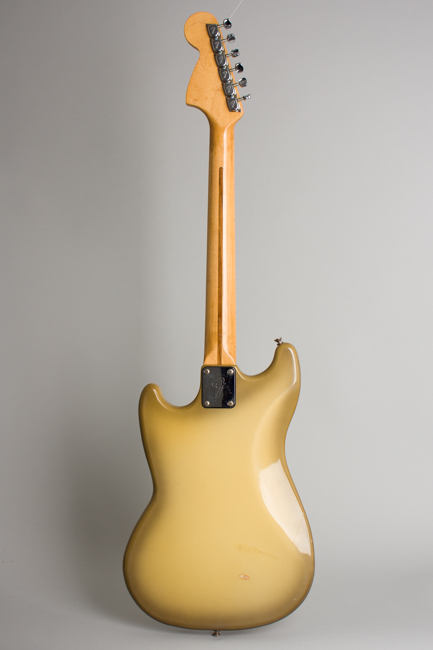 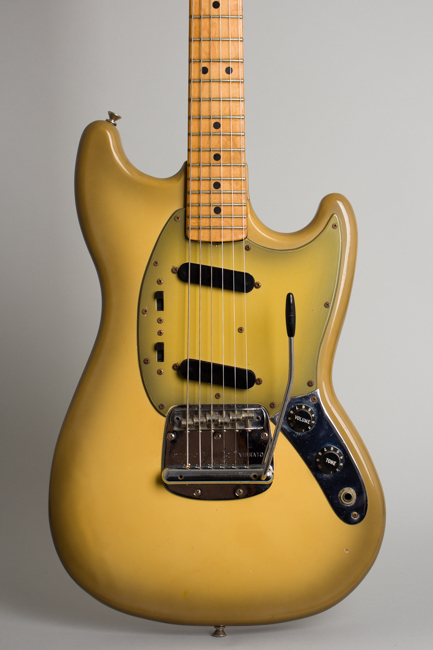 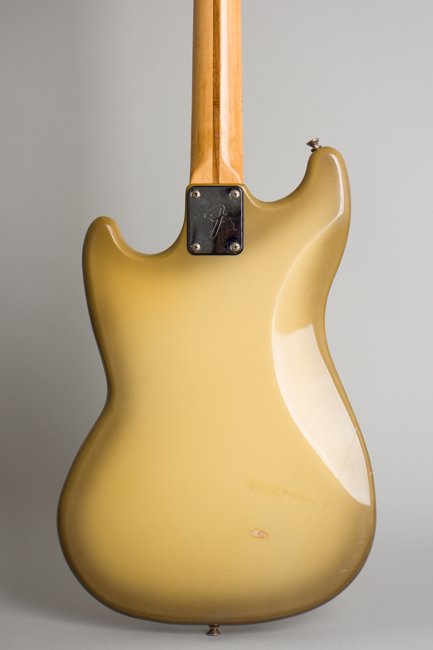 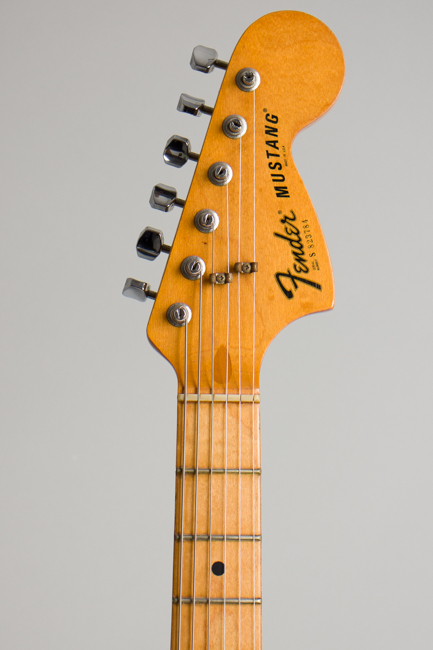 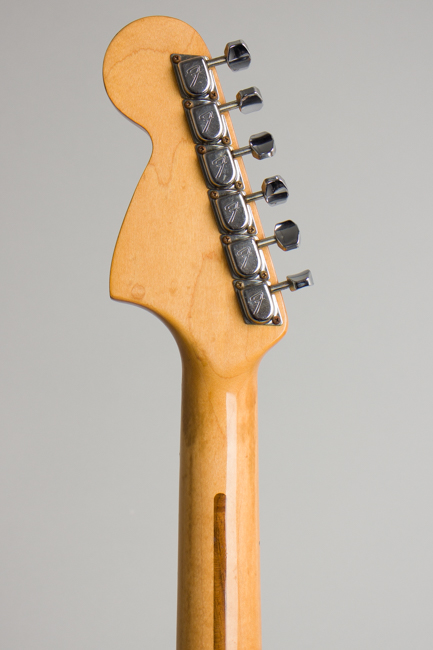 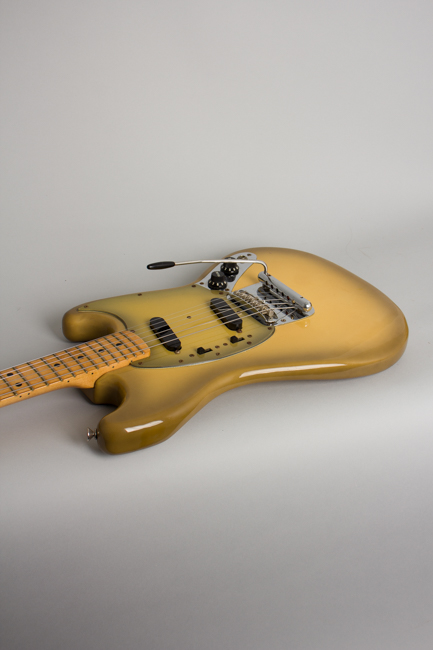 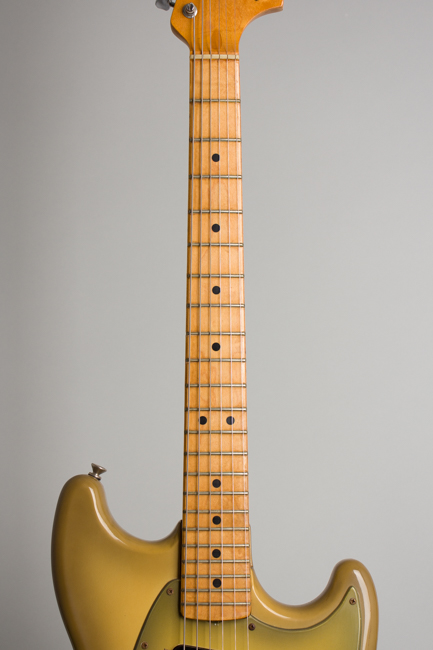 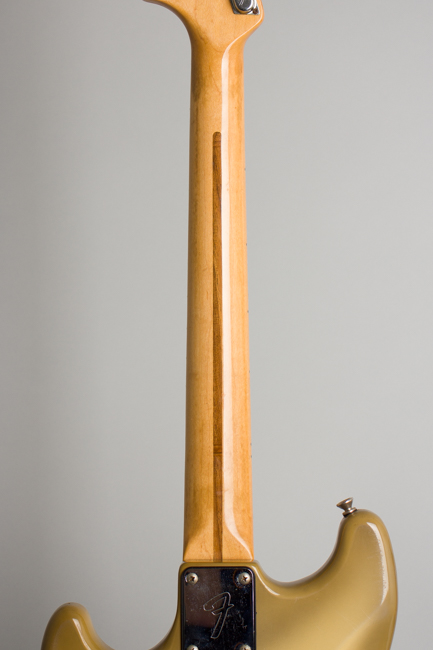 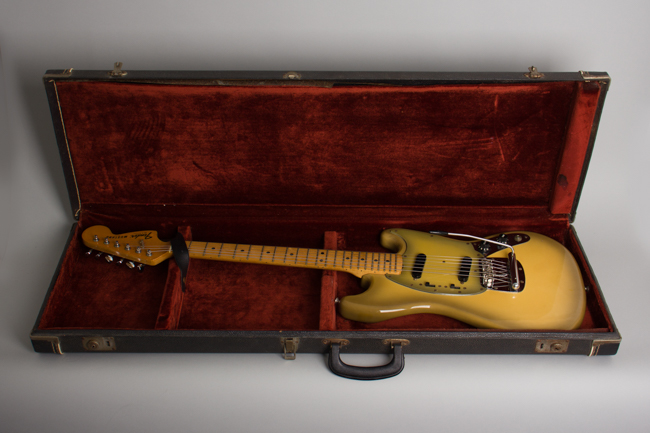 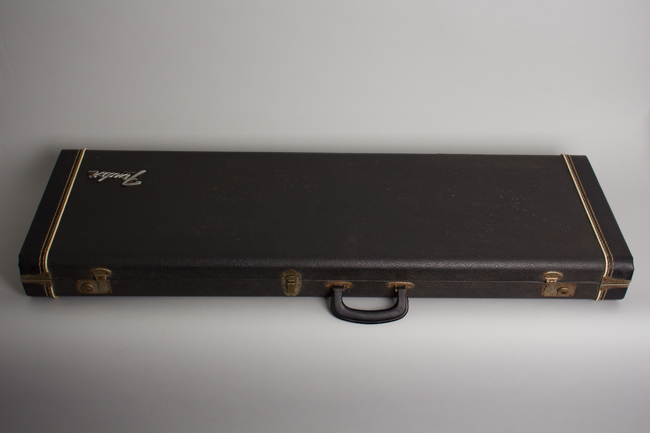 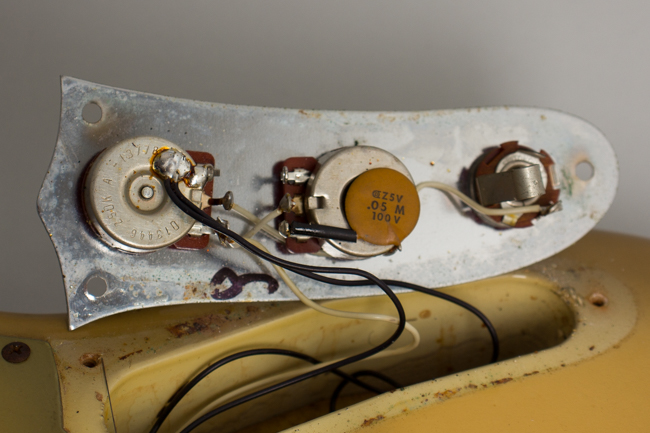 This rather rare and slightly oddball Fender Mustang is an extremely short-lived Antigua model from 1979, one of the least common of all these delightful fretted ponies. This specialized shaded finish option was originally offered only on hollowbody Coronados in the late '60s but was inexplicably revived on Fender solidbody models for a short time at the end of 1970's. The creamy polyester hue with greenish edges was very eye-catching, if not to everyone's taste! It also often does not stand up particularly well in actual use, the painted pickguard being the most prone to wear; this one survives in far better shape than many.

This guitar shows some light general wear but remains clean overall and very unique looking in its love-it-or-hate-it sort of pea soup livery. It was built some years after the end of the run of the rather whimsical "Competition" Mustangs in 1973, at a time when the Mustang had otherwise reverted to more generic 1970s Fender cosmetics. The shaded Antigua finish on the body, topped with the matching painted plastic pickguard certainly offered a much more dramatic look than the standard limited late 70s Fender color palette. This Mustang has a darker Antigua shade than some, particularly on the pickguard which has a greener hue than the body.

Another notable change from earlier models is the one-piece maple neck and fingerboard, an original 1950s Fender feature that came late to the Mustang in the mid-70s. The serial number decal on the headstock designates this as a 1979 model, which is typical for the Antigua runs. The original tone pot dates to the 26th week of 1978; the volume pot is also original but the date is neatly soldered over. Aside from the maple fingerboard, and of course the eye-catching finish most other features remain basically similar to later 1960s models including the switchable in/out of phase pickups and "Dynamic Vibrato" trem system.

Like its automotive namesake the Fender Mustang was introduced in 1964, one of Leo Fender's final original design for the company that bore his name. Although originally intended for students, the instrument is so well-designed and laid out that many professional players have used it extensively over the decades. By the end of the '70s Fender was phasing the model out (the Fender Bullets were the company's new student model concept) and it would disappear officially in 1982. Late 70's Mustangs are rare to begin with and this slightly wacky but very endearing Antigua Mustang, one of the rarest variations, has survived the decades very well and is ready for another 40+ years!

This Mustang shows just some isolated finish wear but remains clean overall and all original. The body just one noticeable ding on the face a bit off the input jack, possible caused by a mis-directed plugging-in attempt. The neck has a couple of spots of "strap burn" and some scuffing on one small chip the back edge but overall there are no large areas of wear. The neck finish has a few tiny dings and dents and wear along the bottom side but is generally intact. All hardware is original and unaltered and this is a nice fine player, and of course super distinctive looking! It resides in its nicely preserved original black Tolex Fender HSC. Excellent Condition.
×