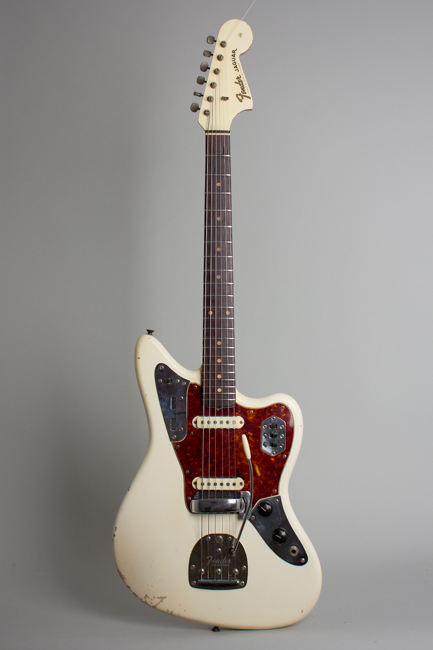 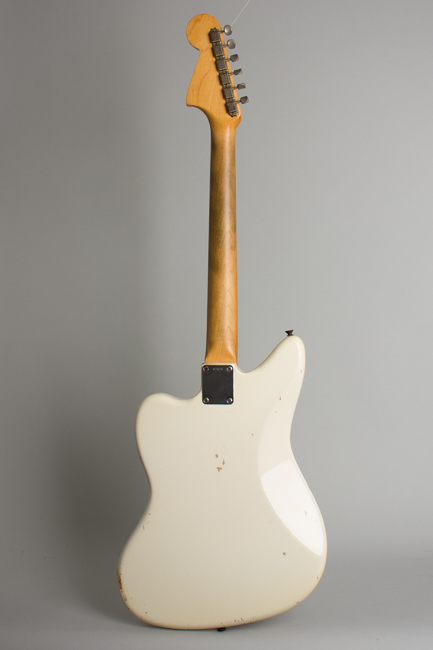 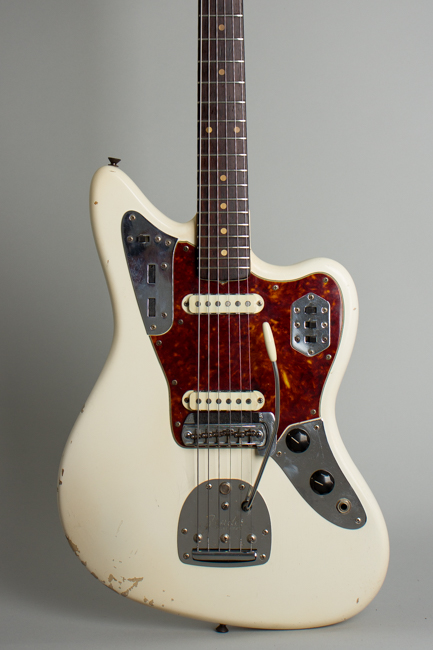 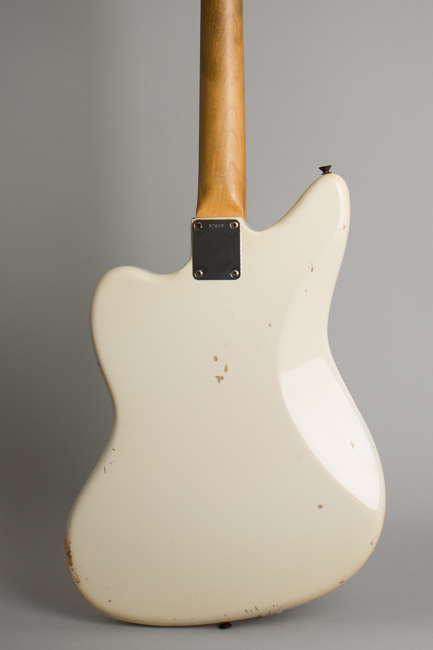 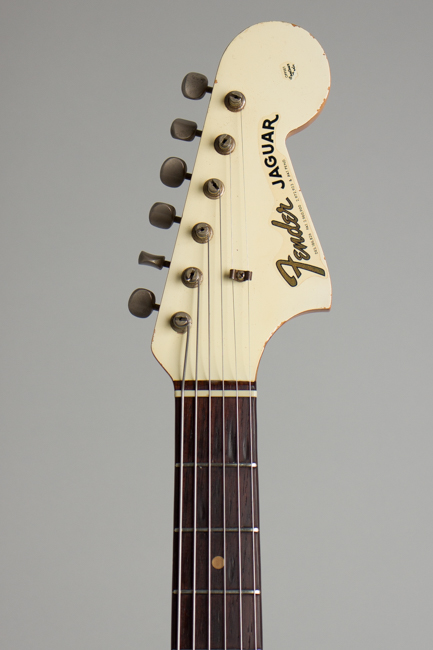 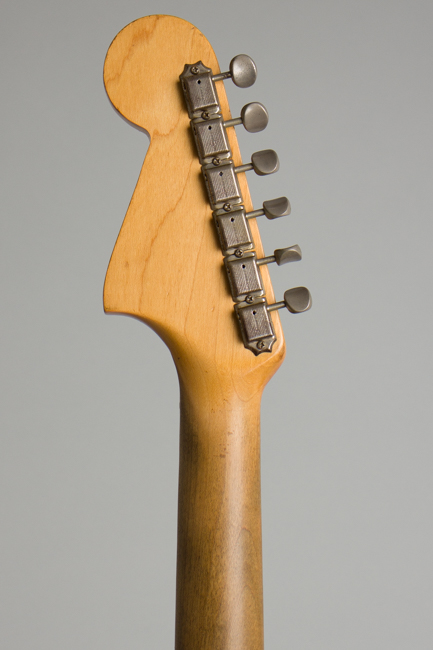 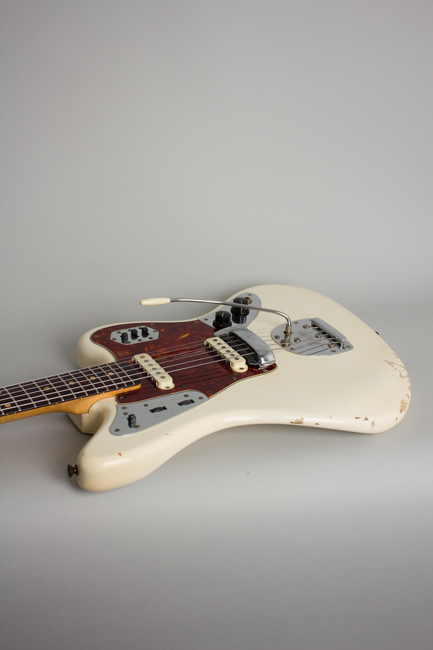 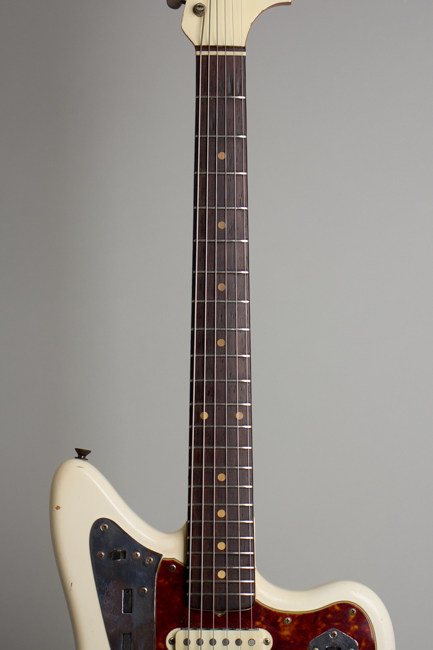 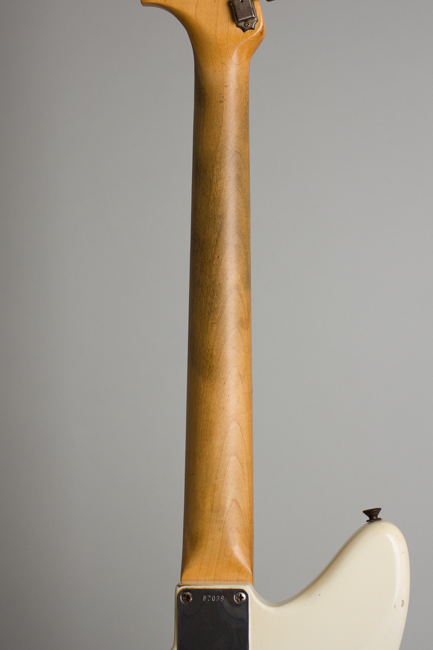 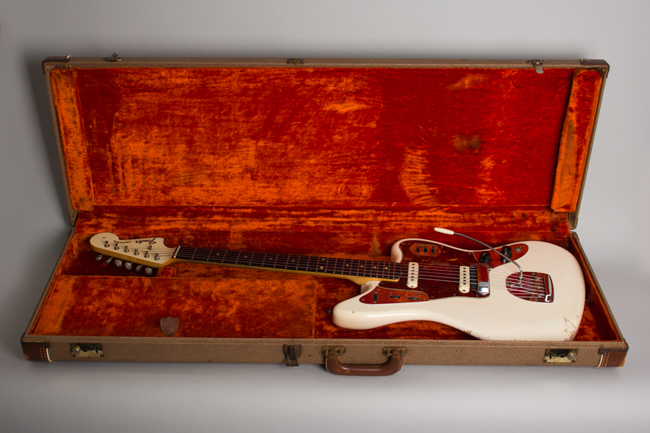 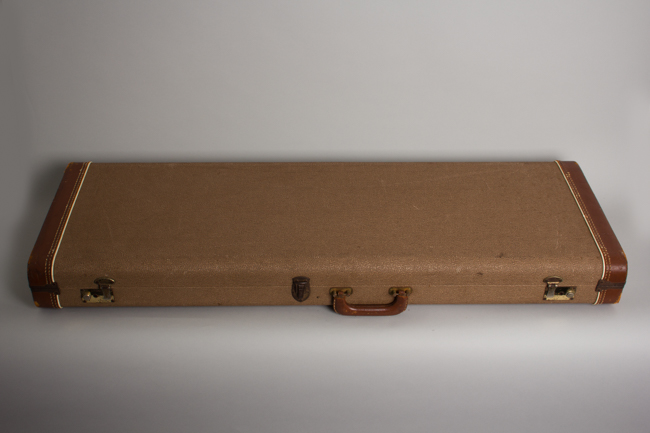 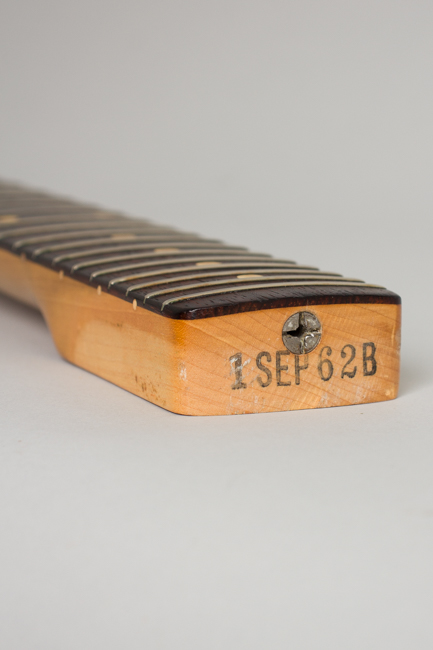 This is a superb original, first-year Fender Jaguar resplendent in the classic Olympic White finish, a color which seems to particularly suit the Jag's automotive-inspired style. This one has a killer look, super vibey feel and sonically a world of classic twang. The Jaguar debuted in spring 1962 as Fender's top-of-the line; the flashy chrome-dazzled guitar was a serious status symbol for many types of combos in the early '60s, especially California teen bands. This one has a neck dated September 1962 with legible pot dates from the 18th week of that year. Typical first-generation features include an unbound thicker rosewood fingerboard with clay dot inlay and gold "transition" Fender logo decal on the matching white headstock.

Like others from 1961-3, this original Olympic White finish was applied without a clear lacquer coat on top. This method shows far less change over time leaving the lacquer looking more true to the original color without the often heavy yellowing common on later '60s Fenders. The White acrylic lacquer top coats were sprayed over a Desert Sand undercoat, a method used mostly for this particular color just around this time. Fender sprayed more color coats when not using the clear nitro top coat, building up sufficient layers of paint to buff to a high gloss. This leaves a slightly thicker look to the finish inside the body cavities than the later method that was more frugal with the color coats. Soon after this guitar was finished out in later 1962 Fender changed to using the "stick" finishing system for bodies which leaves an unpainted rectangle in the neck pocket where it was attached; this guitar is one of the latest we have seen with the old "full contact" neck pocket finish.

Despite a strong recent revival, the Jaguar remains a historically under-appreciated guitar with several interesting features. The model features the same vibrato unit and rhythm/lead circuit as the Jazz master with the addition of individual on/off switches for the pickups making the "Jag" a flexible guitar with a lot of sonic options. This one has nicely twangy bridge pickup and a strong and deep neck pickup, giving it a wide range of sound.

The Jaguar's scale length at 24" is shorter than the other pro-grade Fender guitars, the same as the student-grade Mustang, Music master and Duo-Sonic. Combined with the Jazz master floating tremolo unit this means the guitar is very supple to play but performs better with heavier gauge strings. The two single-coil pickups have metal "claws" underneath the coil and are optimized for clarity, punch and crispness. This combination of factors caused the Jaguar to fall from popularity in the late '60s as twang went out and string-bending with heavy distortion and crunch came in!

Nevertheless these are still the top-of-the line '60s Fenders; quite popular when new and extremely high quality guitars. This one includes a functional original mute...the foam has been replaced. This is a well cared for but definitely well played guitar, likely someone's gigging instrument at some point. It remains still a great-playing and sounding Jag, and makes us think immediately of Beach Boy Carl Wilson, who played a very similar example both live and on record in 1963-4. Custom Color Jaguars are not as rare as some other Fenders, but first year examples are pretty scarce these days. We often find these 1962 Jaguars to be the pick of their litter and especially good instruments; this superb White example is no exception.

This is a beautiful and well-played but not abused guitar, showing evidence of use but remaining relatively clean overall and beautifully original. There are some notable wear spots but the finish does not have large areas worn through as is sometimes found on heavily-played Fenders. The Olympic White as noted shows far less yellowing than many and there is not too much checking, just some shallow lateral lines. There are dings, chips and scrapes overall mostly on the body edges, the upper rear of the face and the center of the back. Many of these are down to the Desert Sand undercoat but not into the wood, incidentally giving an in interesting look at this period-specific finishing style.

The back of the neck is more heavily worn down and feels fantastic, with that classic "old Fender" smooth wood vibe. The white headstock finish is relatively clean with some small dings and dents to the edges; the decal is nicely intact with some darkening to the gold "Fender" lettering. The guitar looks to have been nicely refretted some time ago with period correct wire, with just a little subsequent wear; there are some inconspicuous minor wear spots in the rosewood fingerboard. The nut is later as well.

The chrome shows only very minor wear overall, most heavily the bridge cover which looks like it was actually used for some time. The bridge saddles do show some light corrosion. All hardware is complete and intact including that cover and the oft-missing trem arm. The original brown Tolex case has some typical wear battered but still fully intact and functional, with wear mostly to the leather ends. All-in-all this is a GREAT looking, playing and sounding early Jaguar, exactly the sort of genuine relic you just can't create artificially, although folks are constantly trying these days. Cowabunga! Surf's always up with this California hot rod! Overall Excellent - Condition.
×