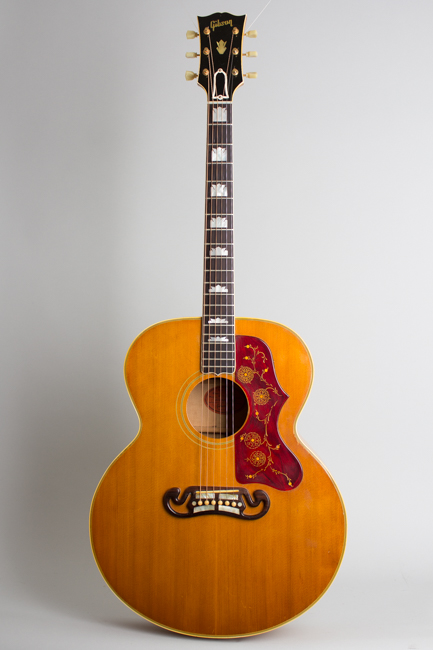 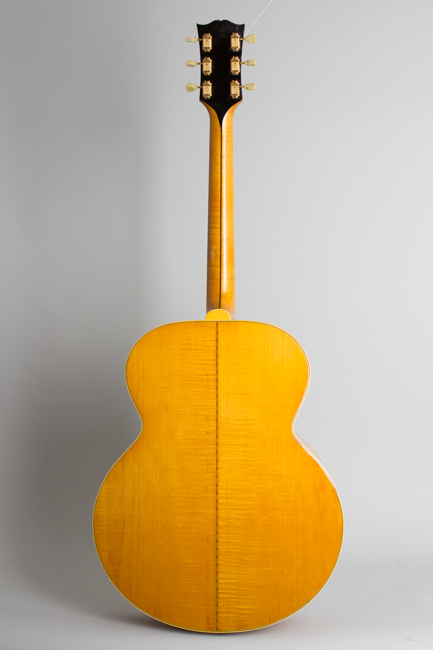 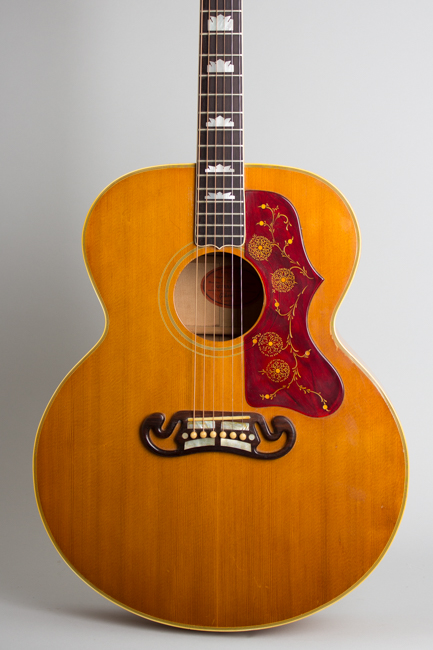 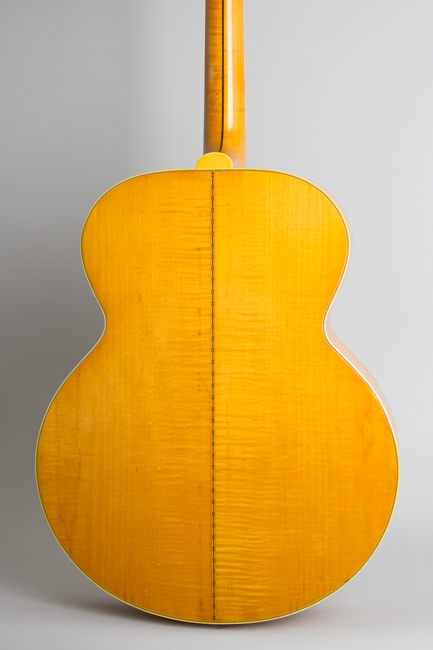 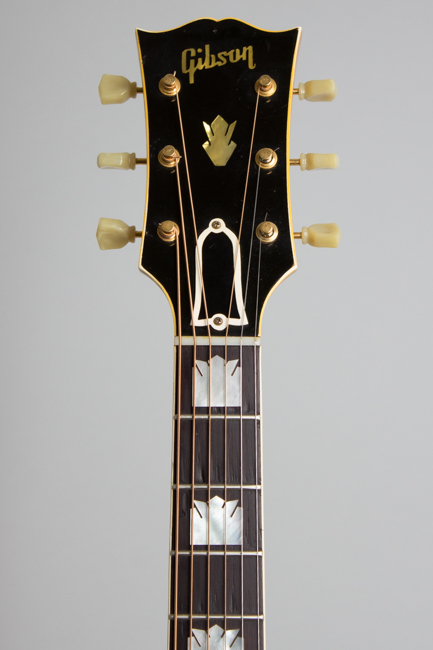 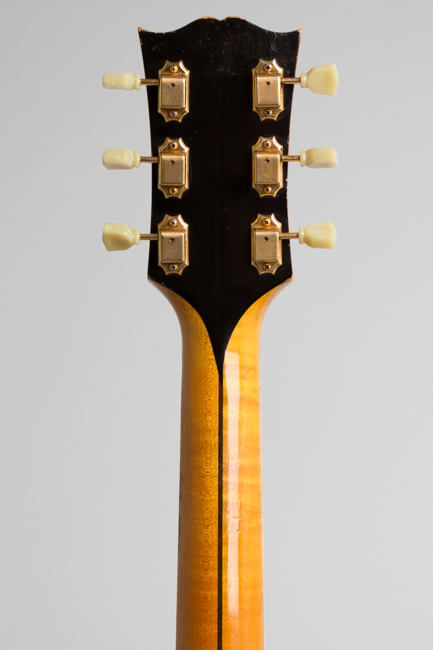 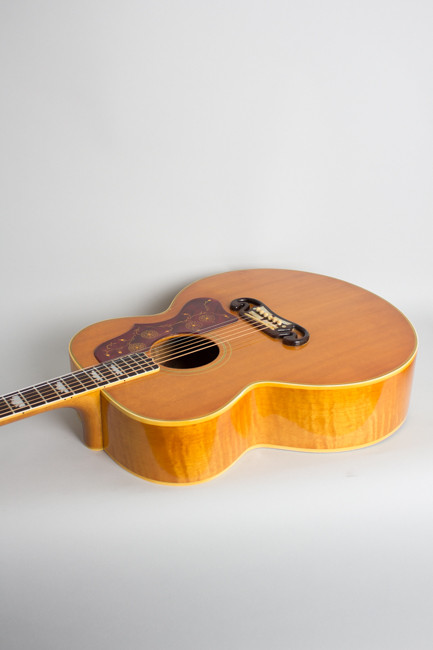 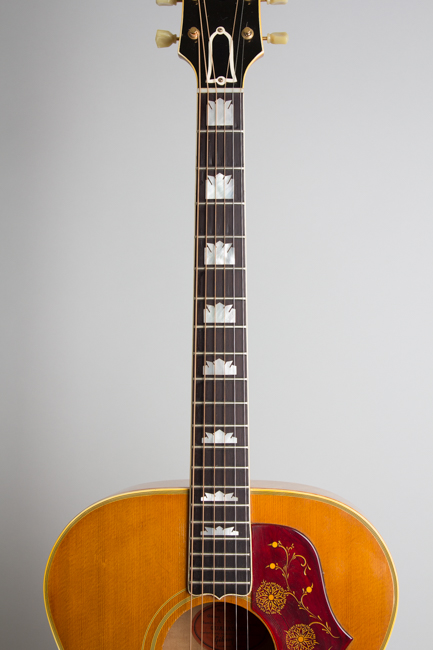 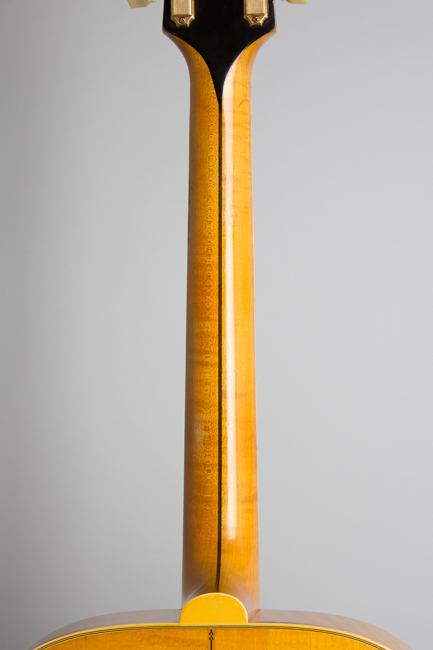 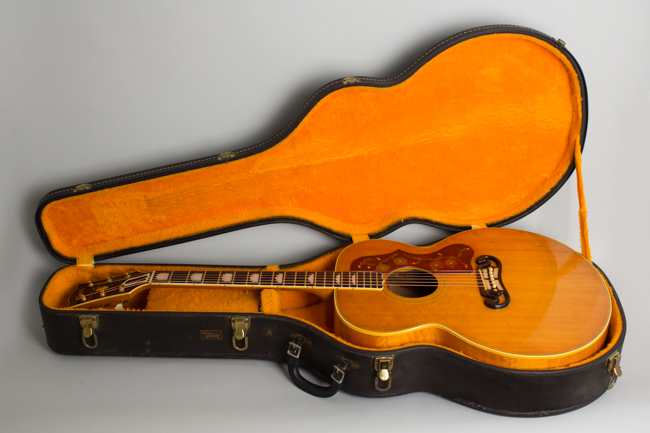 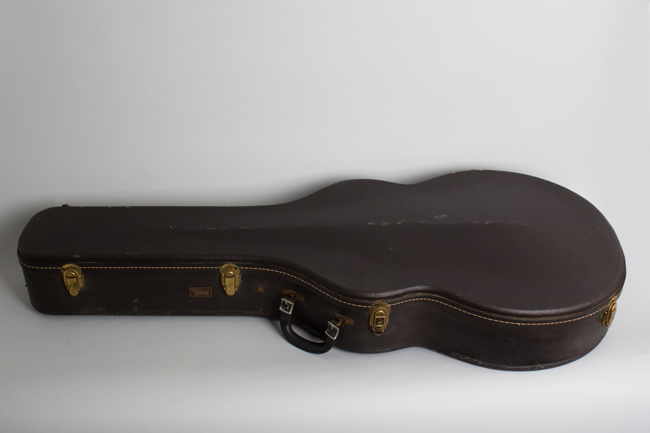 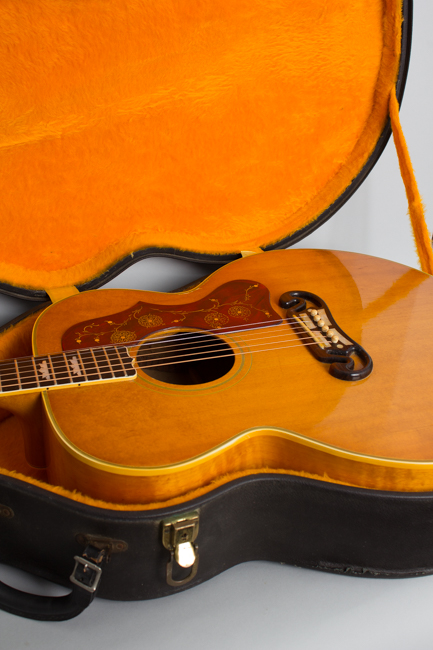 This lovely J-200 was built in late 1958 and originally shipped out of Kalamazoo in January 1959, likely one of the first of 75 of these big blonde beauties sent into the world that epochal year. The J-200 (formerly the SJ-200) was already the performing choice of many country stars, but by this time had become a favorite of many early rockers as well. Elvis Presley himself acquired a natural J-200 much like this guitar in October 1956, and it became his stage standard for much of his subsequent career. The Everly Brothers adopted twin sunburst models as accompaniment for their timeless duets, and the J-200 became forever enshrined as the #1 Rock & Roll rhythm guitar. It also remained a top C&W singer's choice (alongside Martin's D-28) the best playing companion to a Nudie suit.

This one has typical features for the later 1950's-the "N" in the name specifies the "Natural" clear lacquer finish over the nicely if subtly flamed maple back and sides and close grained spruce top. The top is multi-bound and decorated with the unique floral-engraved tortoise celluloid pickguard and the redoubtable "moustache" bridge with multiple pearl inlays-both hallmarks of the model. The laminated maple neck has a bound rosewood fingerboard with "crown" inlay, topped with a bound pearl inlaid headstock. The "King of the Flattops" was Gibson's top-priced non-carved acoustic guitar, designed to power an entire band and look great doing it. The ultimate front person's guitar, the J-200 is still unsurpassed in that role and a fantastic live or recording guitar when a powerful rhythm sound is the job to be done.

This J-200 is very nicely preserved overall, showing really only some light wear for its age. The original gold-plated Kluson Deluxe tuners have been replaced with the correct style more recent repros, the guitar is otherwise original and unaltered. The finish shows some dings, scrapes and dents overall but is mostly relatively clean. There is virtually none of the typical pickwear often seen on these strummer's guitars. We can find no cracks anywhere, which is a delight on a 60+ year old Gibson of this type. Internally it remains untouched original. It appears to have had a very well done partial refret on the lower frets (from around the 6th0 with a bit of old divoting to the fingerboard in the first position.

This is a great playing guitar with a huge ringing sound, one of the best '50s J-200's we have had and clean looking too. The case is an early 1960's black Gibson piece, technically a year or two later than the instrument but as these expensive guitars often sat at the dealer's for some time quite possibly the one it was originally sold with. The handle has been replaced. In the pocket is a cool old cowboy strap, some old Gibson strings and a Gibson polish kit for good mojo. This is a divinely cool package, a rhythm player's delight, and fine songwriter's tool and effortlessly sharp looking front person's guitar, even without the Nudie suit! Overall Excellent Condition.
×