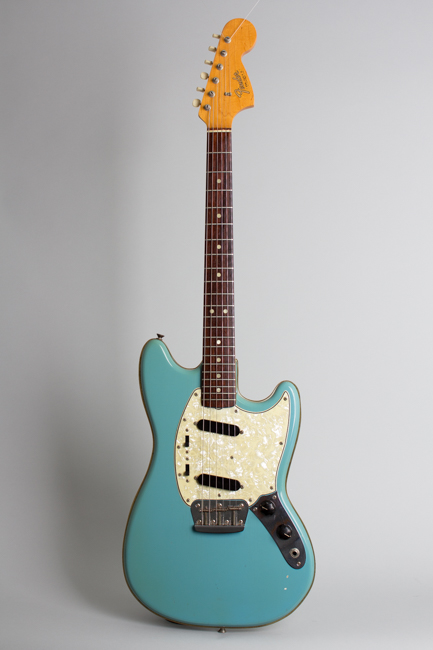 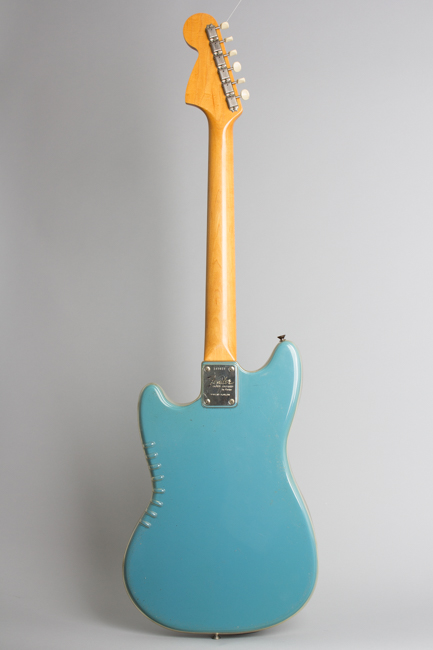 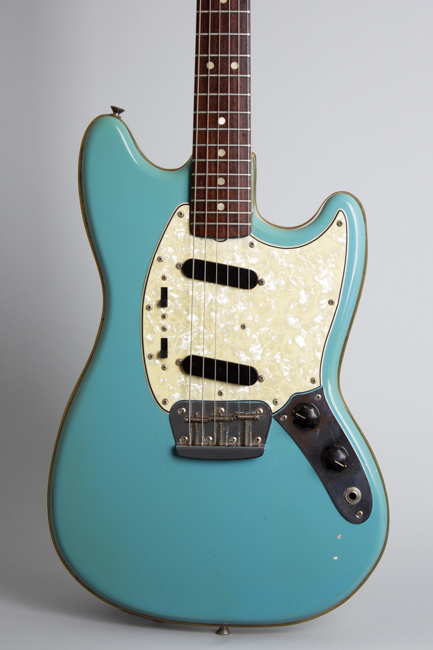 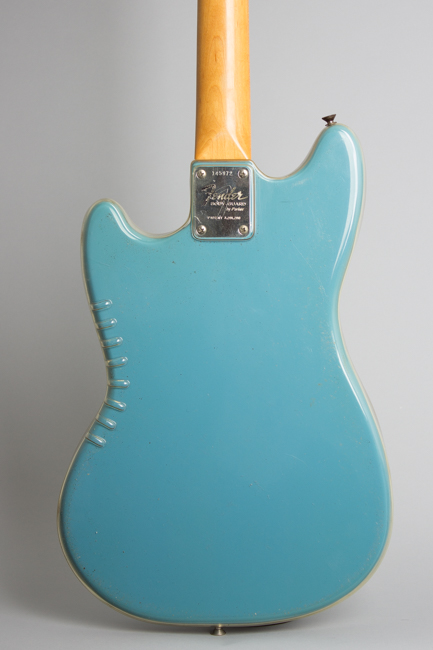 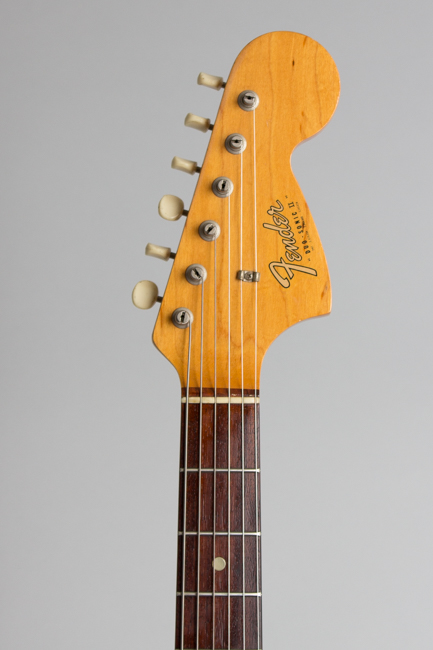 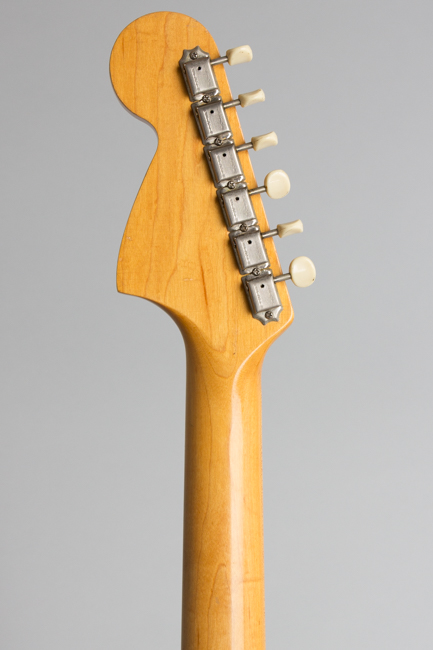 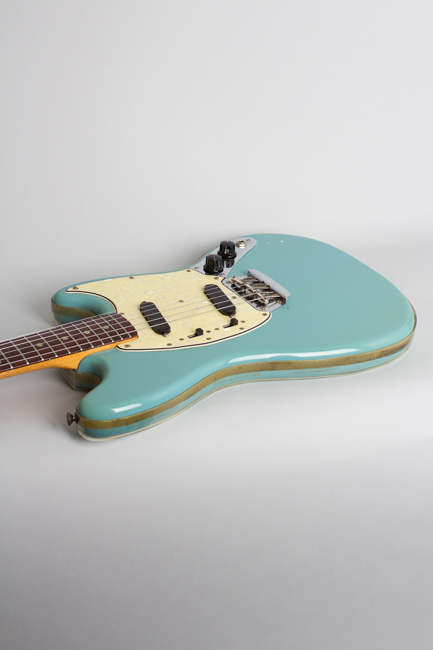 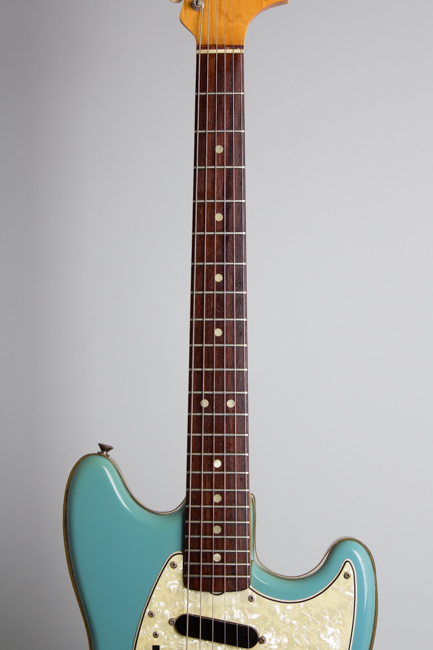 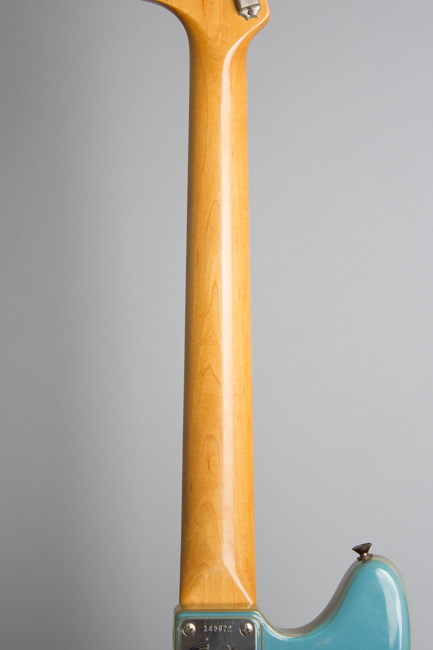 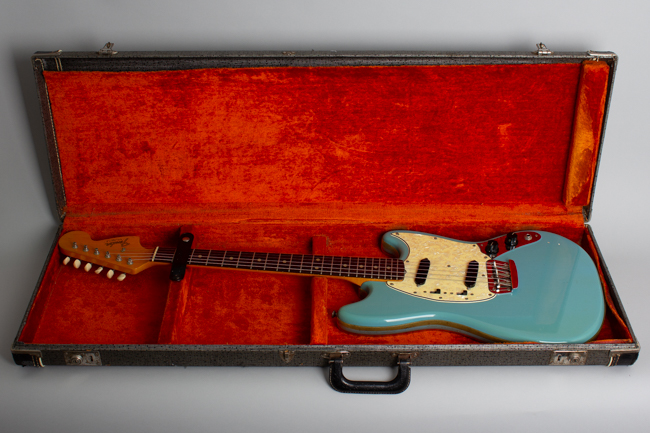 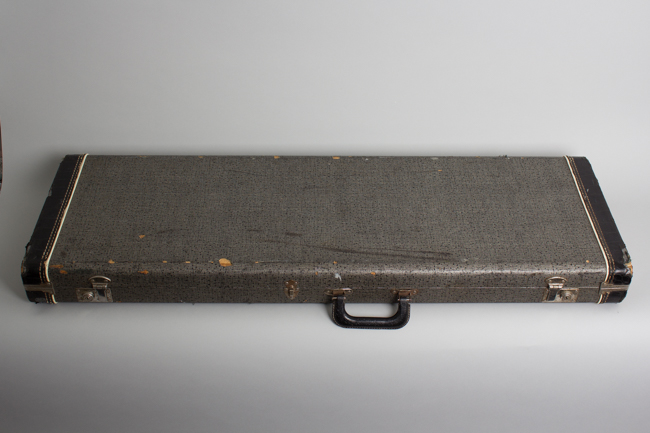 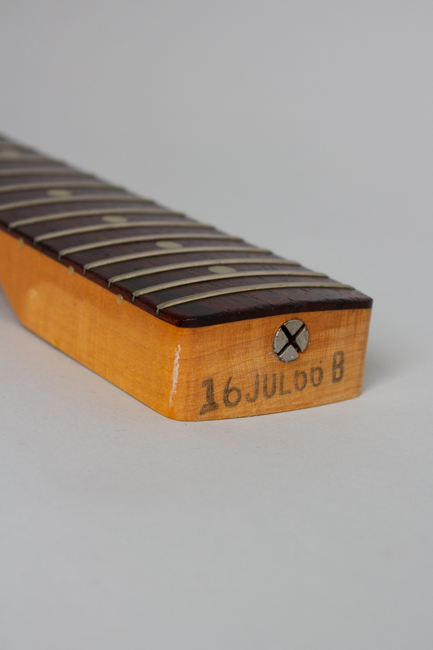 This Fender Duo-Sonic II was assembled just about two years after the model was redesigned in mid-1964 with components interchangeable with the new Mustang. THAT guitar took off to become one of the most popular electrics of the 1960's, possibly the most successful student solidbody ever made. By contrast the Duo-Sonic seemed to fade away, even though it was at that point exactly the same instrument, just without a vibrato. It just goes to show how much a snazzy name and a whammy bar mattered to "the kids" in the mid-60's!

This beautiful blue-finished 1966 example is trimmed with a pearl celluloid pickguard and black pickup covers and switches. This was one of three spiffy color schemes offered, and we think the most attractive! The neck has the longer of two scale lengths offered, 24" (shared with most examples of the Mustang) which most players find friendlier than the very short 22 1/2" scale the Duo-sonic started out with in 1957. The neck is dated to July 1966, just about a year and a half into the CBS era. The pots are marked to the 18th week of 1966. The switches for the two pickups offer interesting in/out of phase sonic options, identical to the Mustang.

Something of a forgotten model by the guitar-boom mid-'60's, the Duo-Sonic sold just under 3,000 units in 1966 but was completely eclipsed in by the Mustang which sold nearly 18,000 units that year alone. With its string-through body-mounted bridge, the Duo-Sonic II is a more solid-feeling instrument than the tremolo-equipped Mustang it shares all other features with. It is often found to hold tuning more steadfastly, especially under a hard strummer's attack. This one has the added oddity of a clear Fender Bodyguard mounted to the back, something we have never encountered on this model before! As usual this have left some discoloration along the body edge, but has protected the back handily as intended! Overall this is a very nicely preserved Duo-Sonic and a fine-playing, light, handy little guitar.

This is a very nice Duo-Sonic overall, showing just some minor wear and remaining all original and unaltered, if one counts the additional piece of fender hardware as original. That bodyguard has protected the lacquer finish on the back as intended, but left the telltale darkened stripe around the rim of the body as the foam padding deteriorated. We see no reason not to leave this bit of clear plastic Fender whimsey in place, as it has been since 1966. The top has a few small dings near the jack but no major wear, and the color has hardly faded at all.

The back of the neck has very little wear, just a touch on the fingerboard edges. The original frets show some light wear in the lower positions but are still quite playable, with just some minor divoting mostly under the unwound strings. The rosewood fingerboard has very little wear as well. This is a fine sounding and playing Duo-Sonic, a guitar one writer once described as "the .22 Magnum Derringer of the Fender line". It remains pretty much as it was played in the 1960's, Bodyguarded and unbowed. It is complete in the original HSC which shows some external wear, and a dead middle latch with the larger end latches working fine. Excellent - Condition.
×