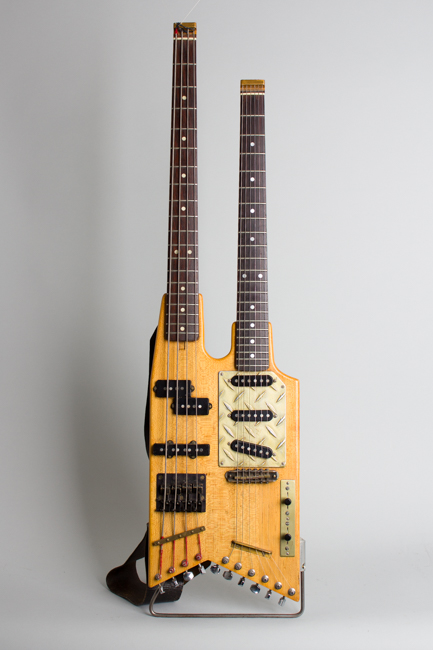 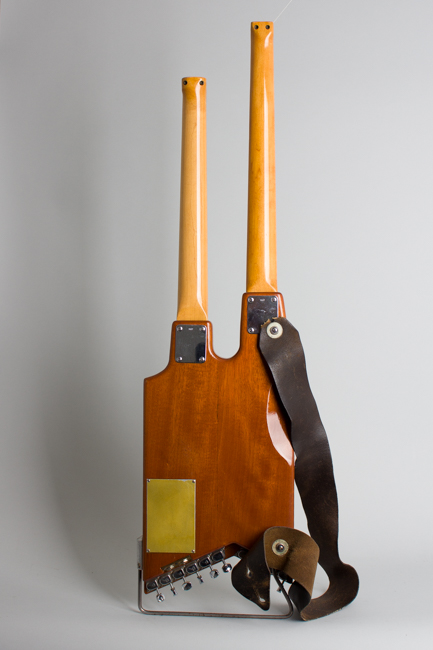 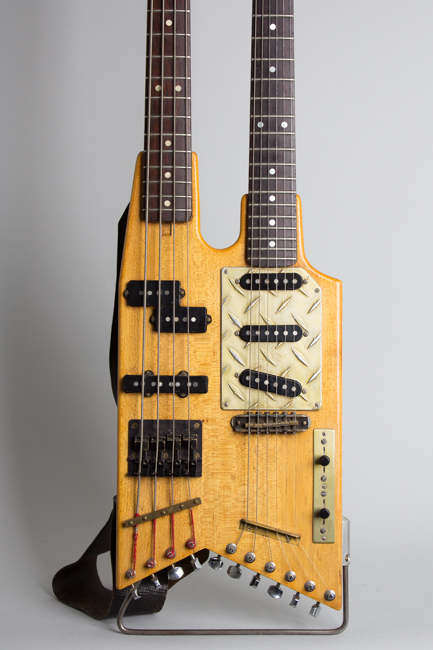 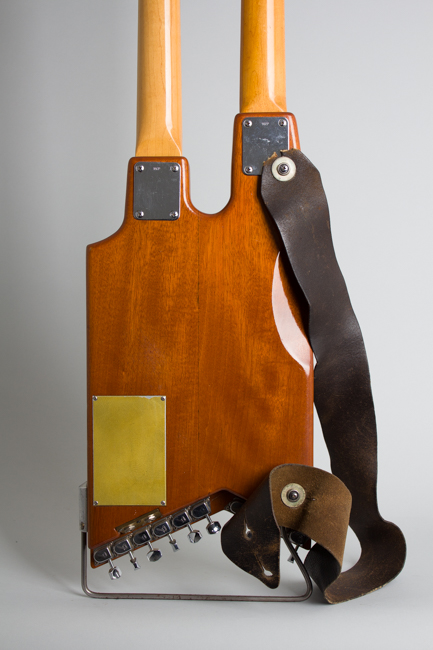 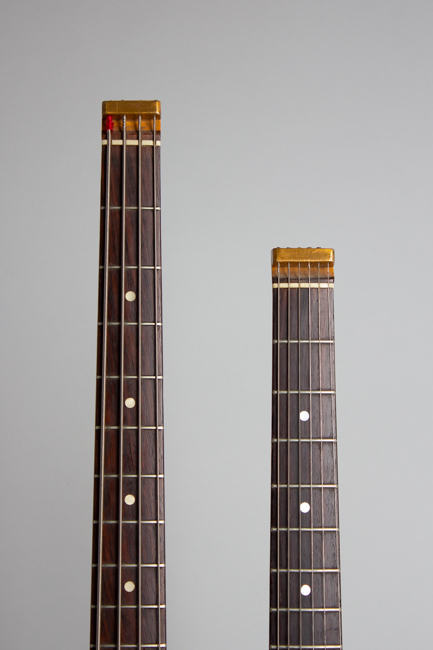 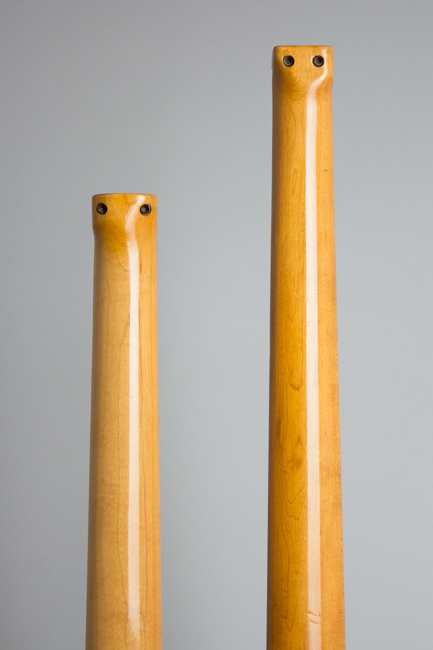 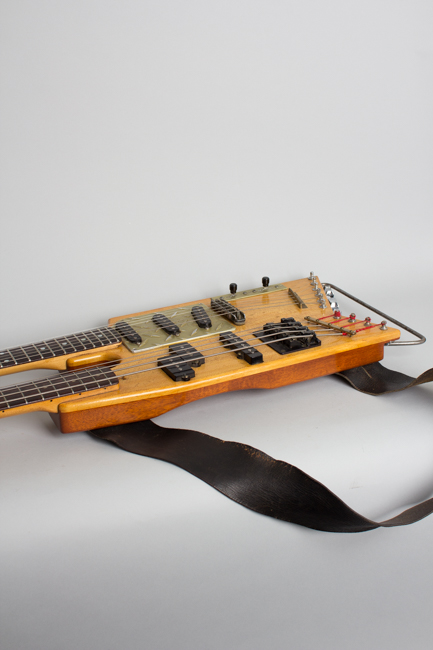 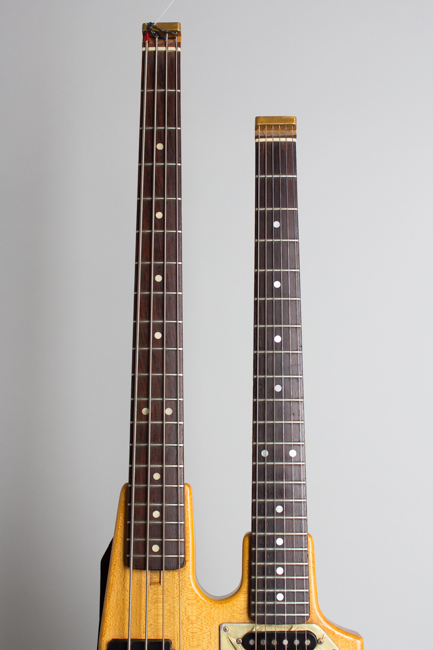 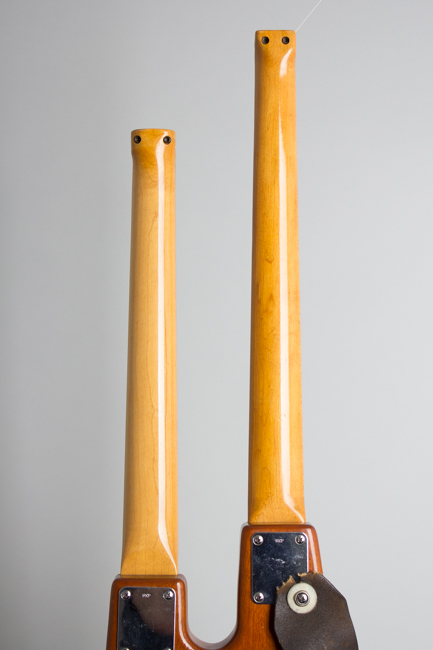 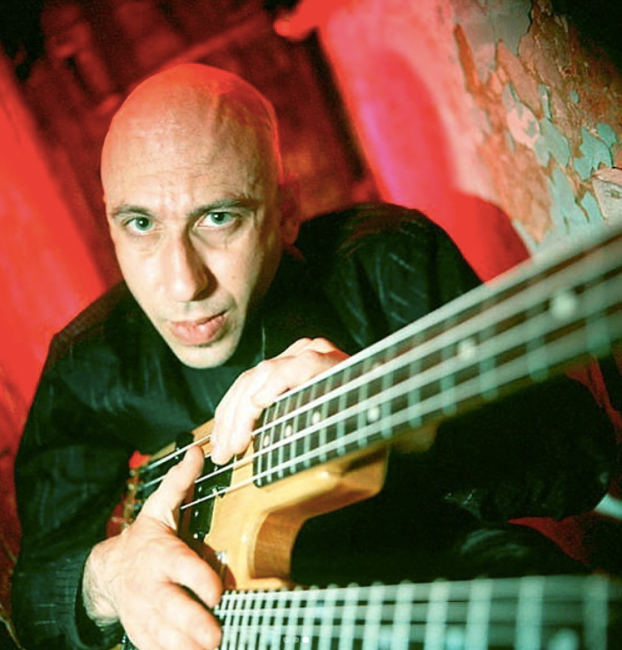 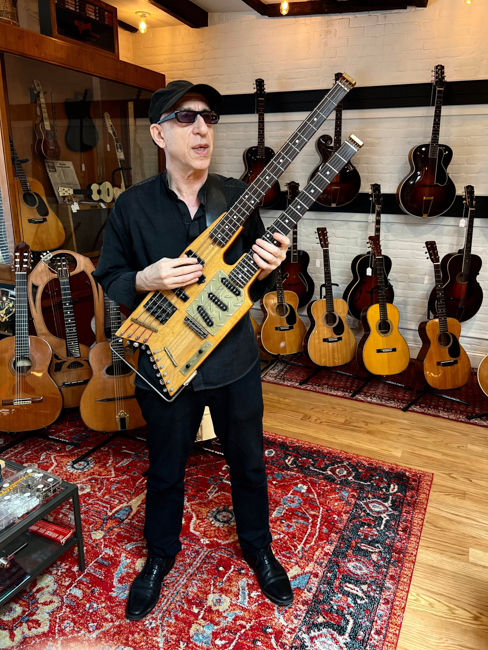 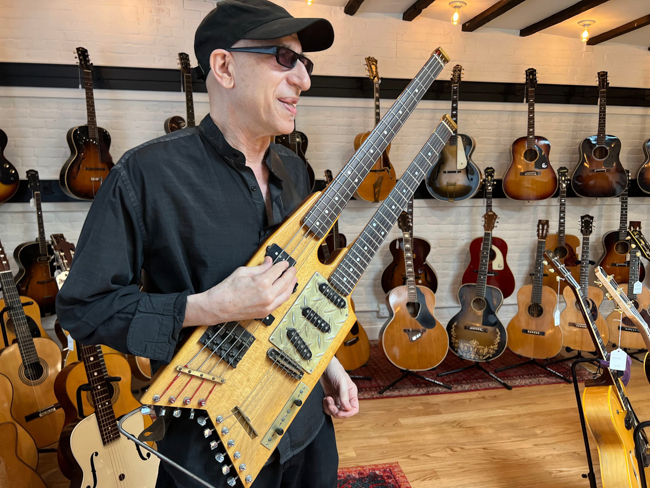 This is one of the most distinctive and unusual artist instruments we have ever handled, Elliott Sharp's "Nr. 4" Doubleneck guitar/bass custom built for him by noted sonic/visual artist Doug Henderson. This was Elliott's signature stage and touring instrument for the 1990s, used extensively live for a large number of this always protean artist's projects. Elliott received the instrument from Henderson in 1991 and immediately put it to use in solo concerts and with his bands Carbon and Semantics, in the band Slan with John Zorn and Ted Epstein and in Psycho-Acoustic, his duo with harpist Zeena Parkins.

Elliott Sharp has relied for a good part of his long career so far on this basic design of headless doubleneck, with a minimal body, tuners at the bottom, a short-scale bass neck above a Stratocaster-wired guitar below. Doug Henderson made the body for this one from limba wood with a top of flamed maple. The most distinctive visual element is the signature metal deckplate pickguard on the guitar half. It is built with a 30" scale Fender Mustang bass neck and a 25.5" Schecter Stratocaster guitar neck. These days it's unlikely anyone would cut up a Fender Mustang bass like this, but in 1991 it was not considered a big deal! Each neck has a slight bulge where the headstock isn't, which many players prefer to the Steinberger "nothing there" feel.

The hardware is a mix of pieces from this era. The black-chrome bass bridge is by Wilkinson, the guitar bridge is a brass Mighty Mite piece from the '70s. The tuners are 1970s fender enclosed machines; there is a metal bar running beneath the bottom of the body to prevent damage to the pegs when it is set down; a most clever design! Elliott recalls all the pickups being sourced from DiMarzio. It is wired with a 5-way switch on the guitar and a 3-way for the P-J combination on the bass. There are no volume or tone controls, and two discreet output jacks; in performance each neck would be plugged into a volume pedal and then into its own effects pedals or rack.

This instrument served Elliott well for a long time; at just under 11 Lbs. it is fairly light for a doubleneck but he told us as time went on using this as a touring instrument he would come home "buff but with a sore back"! While specially designed for a determinedly unconventional artist this instrument is equally adaptable to conventional doubleneck applications as it is to Elliott's personal brand of overhand tapping and harmonic blizzardry. Really it is a neat piece of NYC (and the world's, really) musical history and a signature instrument from a singular artist.

This instrument, as would be expected for a long-toured piece, shows a decent amount of playing wear overall but remains as built (and widely seen) with no notable damage or repair. Except for a light truss rod tweak to the bass side and general dusting off we have left the instrument as Elliott last played it, with a bit of road funk still present. The finish has dings, scuffs and scrapes overall, there is some typical wear to the hardware. The frets mostly remain in good playable condition; on the upper part of the guitar section they show heavier marks from aggressive tapping. Elliott's leather touring strap is still attached, and the strings are his; we can put new ones on if desired! It is housed in a functional if non-descript gig bag. Overall Excellent - Condition.
×