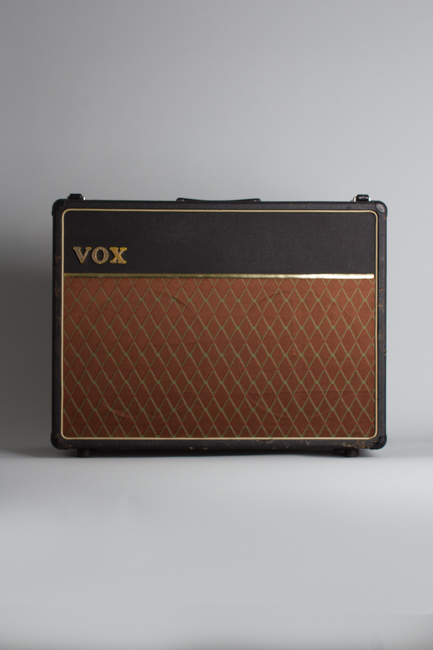 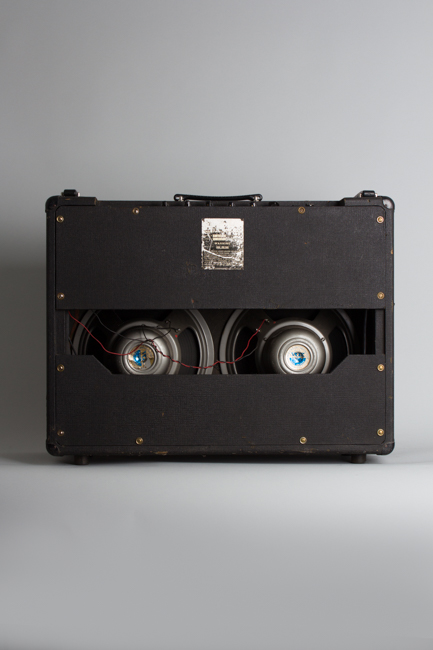 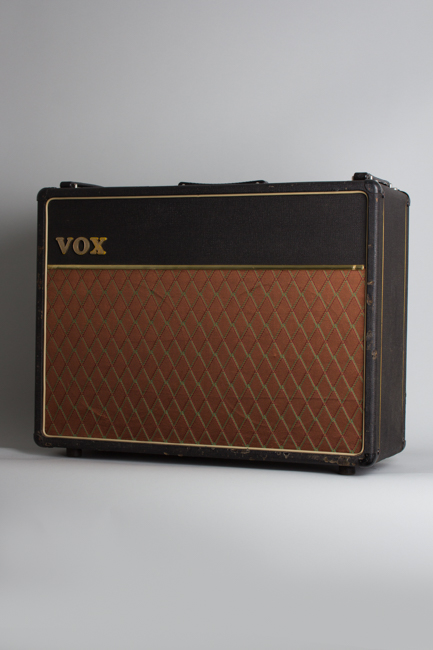 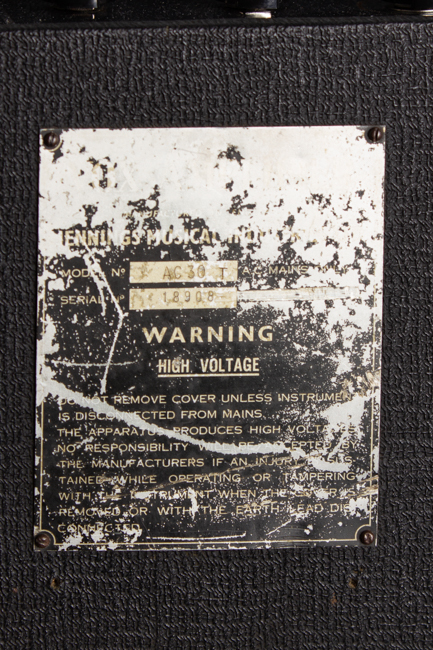 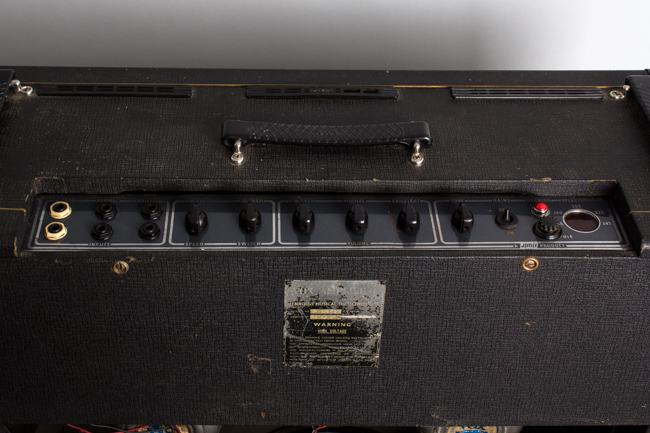 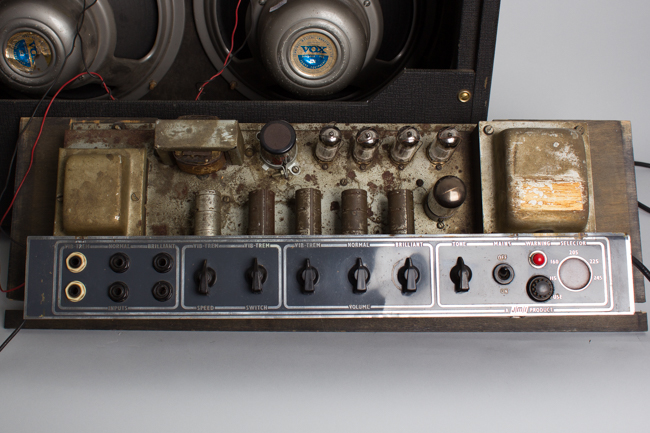 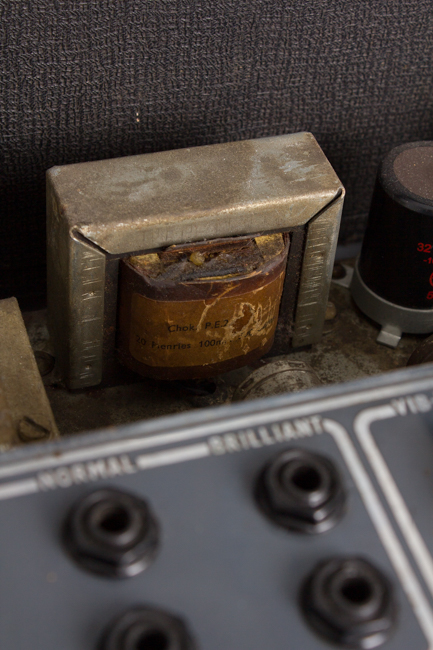 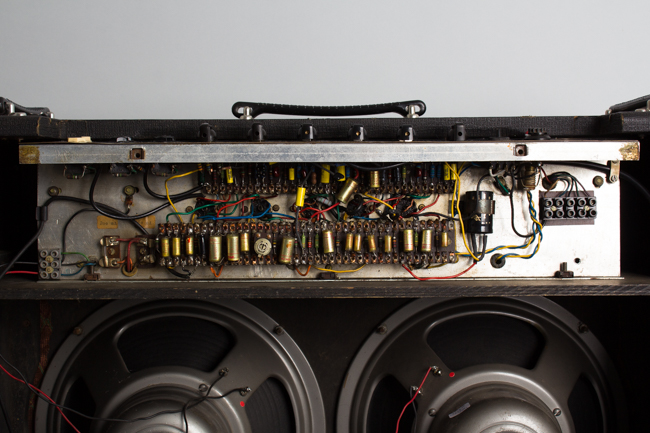 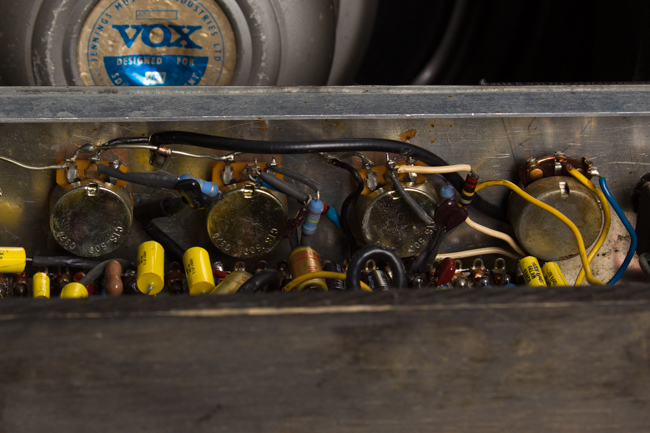 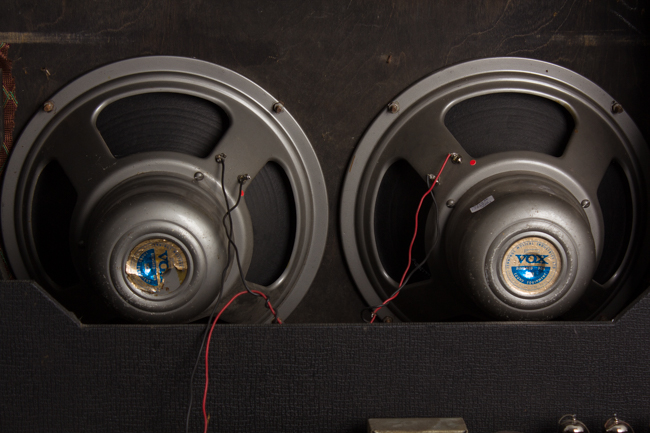 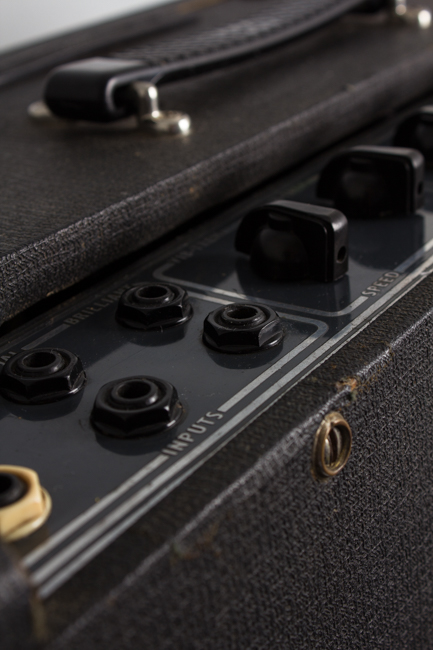 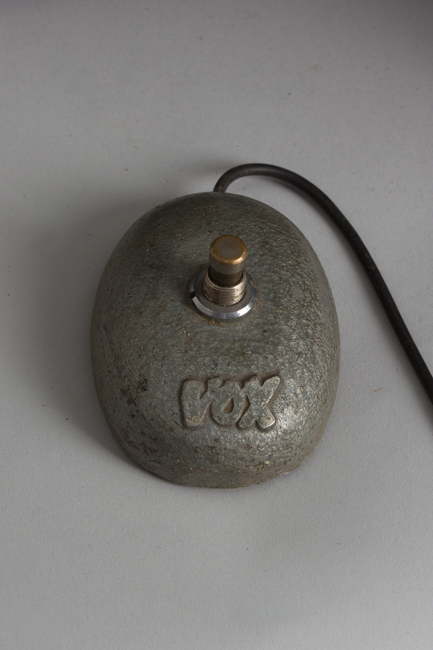 One of the most revered of all amplifiers, the Vox AC-30 was literally THE sound of the UK Beat Era and the US British Invasion and is still one of the world's most popular amps among those who prize tone above all. JMI (Jennings Musical Industries) of Dartford, Kent could hardly keep up with the demand as the Beat Boom took England by storm; the players of the time used a number of now-classic guitars but nearly all owned -- or coveted -- an AC-30.

Conceived initially as a response to Fender's revered Twin amplifier, the AC-30 Twin was a complete overhaul of its single-speaker predecessor, overcoming a major problem: there was no speaker made at the time that could handle the ambitious output of the newly developed higher-powered amps. This led to speakers rated for sometimes half the power output of a circuit often blowing as a result of the heavy abuse and high volumes they were subjected to by touring musicians.

The AC-30 twin overhaul featured a completely redesigned chassis, abandoning the old top-and-bottom format that had proven detrimental to the longevity of amplifiers as touring musicians threw cables and sundry in the back where the fragile tubes were mounted upright. The new version was a part-aluminum, part-steel construction containing everything at the top of the cabinet including the tubes, much like Fender amps of the day, Unlike Fender practice, these were mounted front-ward in the chassis and had accompanying vents on the top of the cabinet. By fall of 1960, the AC-30 Twin was given the same split-front styling as the rest of the Vox line-up of the day. Three handles were fitted at the top; anyone who has carried an AC-30 up (or down) narrow club stairs appreciates the extra end handles!

The AC-30 Twin was essentially the earlier AC-15 with twice as many EL84 power tubes and doubling up the speakers, along with a couple other changes to accommodate the higher power rating. These were notably a GZ34 rectifier tube and overall higher voltages to give the AC-30 more headroom. As groups in the UK moved into bigger venues this became crucial; the desire for a heavily overdriven guitar sound was still a few years away!

This particular amp is the AC-30/6 version of the Twin model, featuring Dick Denny's brainchild 6-input/3-channel design; one channel labeled normal, one brilliant and one vib/trem. The additional channel was made possible by going from EF86 pentodes to the dual-triode 12AX7, allowing for two gain-stages per tube, as opposed to one. The 12AX7 was comparatively a far less problematic tube in terms of noise and reliability, though arguably considered less Hi-Fi with a narrower frequency range. This version of the AC-30/6 was in production from late 1964 till the very end of JMI; the most noticeable changes from previous versions was the grey etched escutcheon panel, black plastic vent louvres, Poly Grey T.1088 speakers and black-backed diamond grill cloth. Running four EL84 power tubes into two 12" Poly Grey T.1088 speakers, this AC-30 puts out around 30 watts, true to its name.

Many AC-30s from the early-to-mid 1960s have generations of heavy use behind them, and the wear to prove it. This one is not exactly an exception, but appears to have survived the Beat Boom and beyond in fairly good composure!

This particular AC-30 is a generally well-preserved example with moderate overall wear. It is becoming more and more difficult to find any AC-30 in pristine shape; most of those not gigged into the ground 50-60 years ago are ensconced in studios or private collections.

The dark 'basketweave' cabinet covering shows just some scuffing and light wear, mostly on the lower areas. The serial number plate on the back has some heavy scratches and scrapes to the upper portion but the serial number 18908 is fully legible, dating the amp to April, 1965. The etched grey escutcheon top panel is very clean with minimal disturbance and retaining all original knobs, it has a couple of dents. The grille cloth appears to have been replaced a long time ago with a later Korg brown reproduction, which is still cosmetically in the right style. The amp retains the original hardwired footswitch for the tremolo.

Electrically, the amp is nicely original and largely untouched. The transformers are all original to the amp. The two 12" Poly Grey T.1088 speakers are original they appear to have been professionally reconed in 2019 and sound wonderful. The amp has received our typical maintenance and servicing, including replacement of all electrolytic capacitors, install of a grounded 3-prong power cord, cleaning of all sockets pots and jacks, biased to spec and any minor but necessary replacement of out-of-spec components.

Please note that this amp has been adapted for US use, hardwired for 115V with the voltage selector switch taken out of the front panel. It can still be re-wired to other input voltages, but currently should ONLY be plugged into a grounded US outlet. This is one of the coolest AC-30 we have had the honor to feature in our showroom; a beat era masterpiece and a spectacular sounding amp by any standard. Excellent - Condition.
×