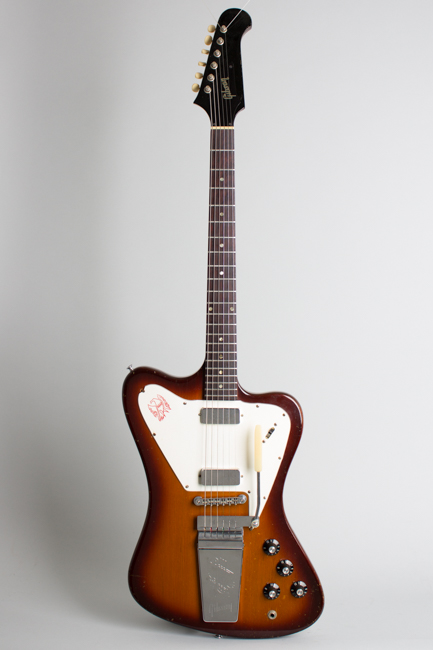 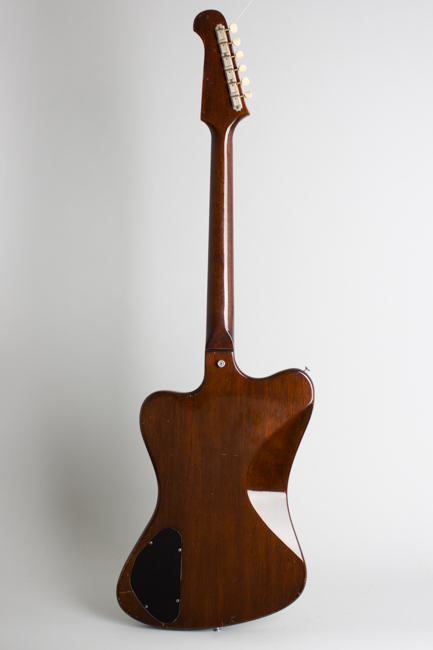 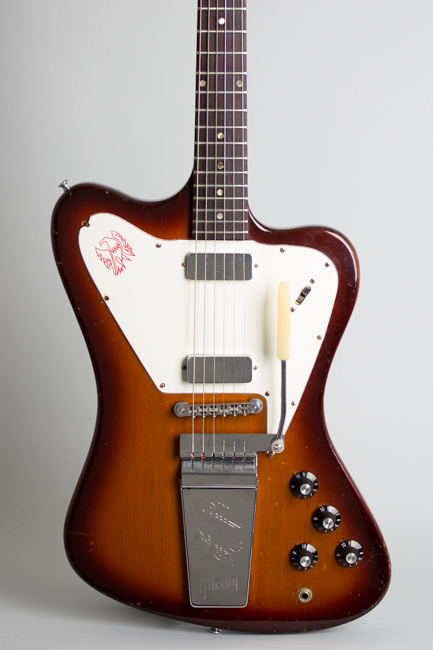 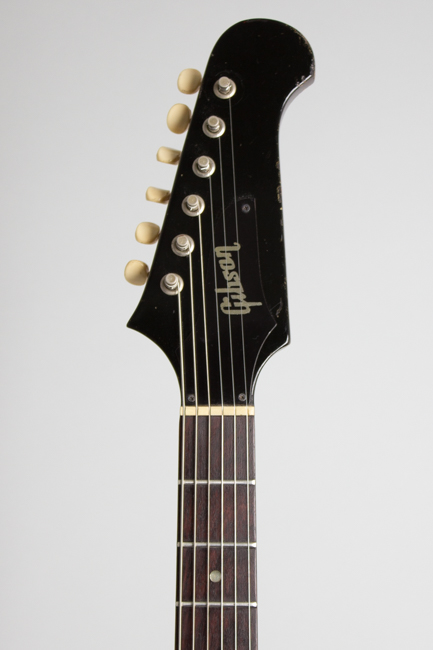 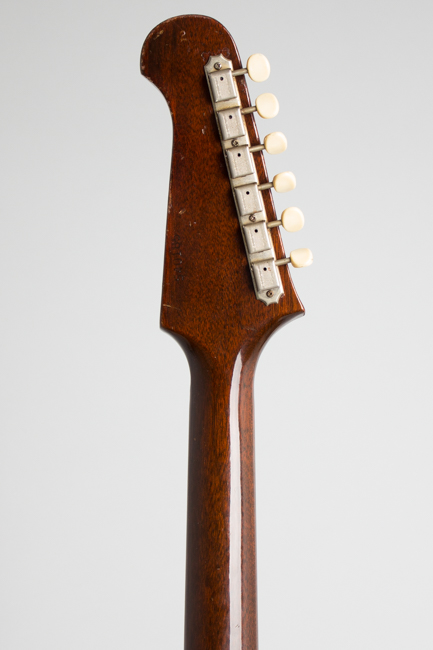 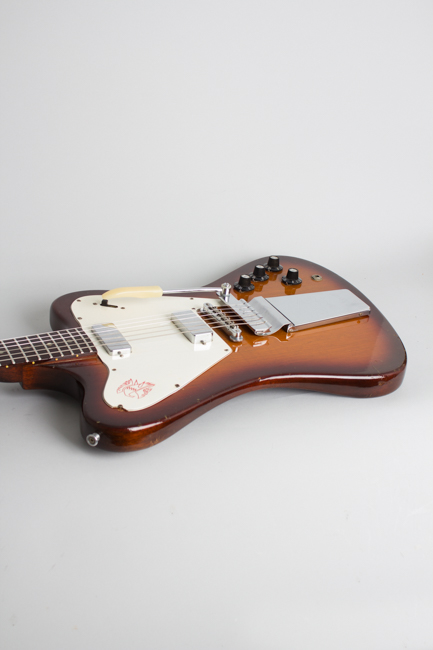 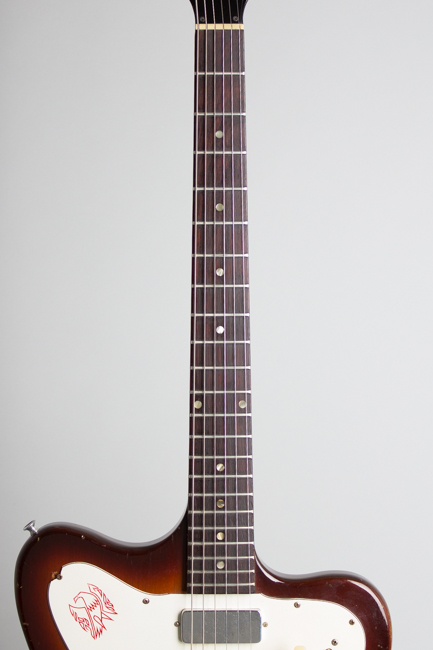 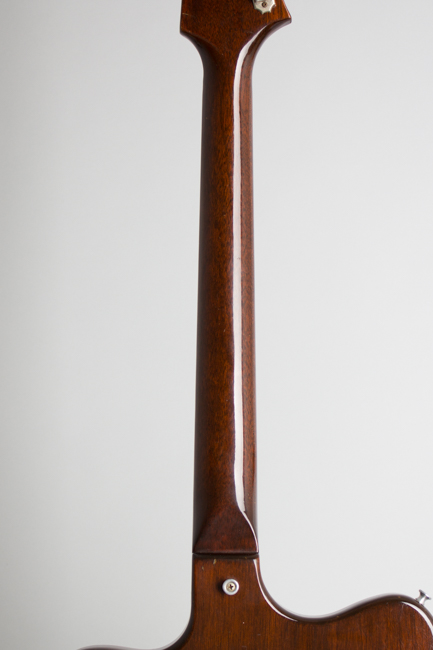 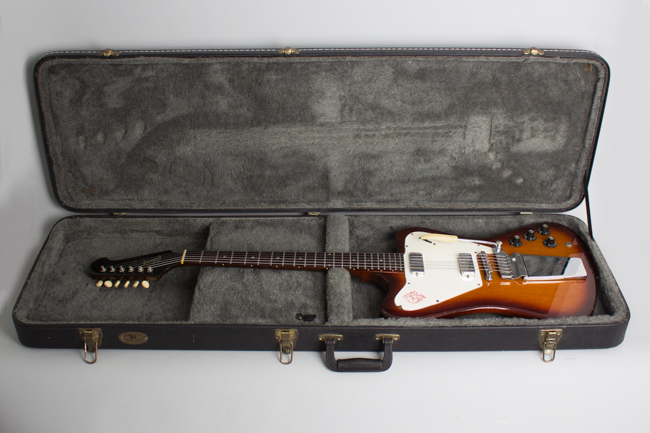 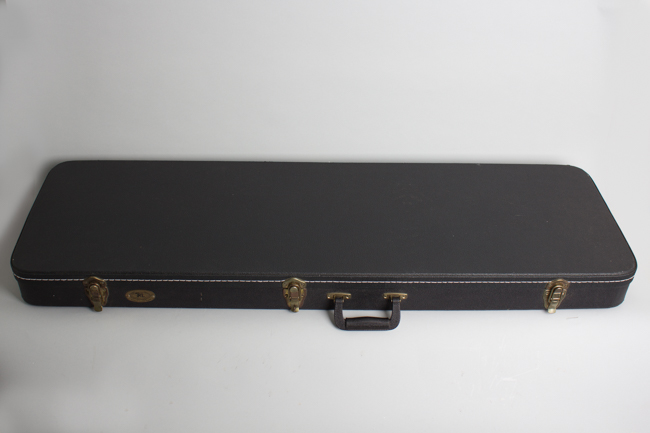 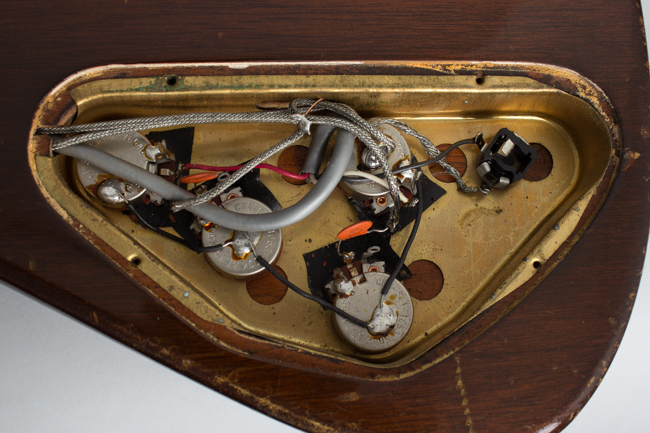 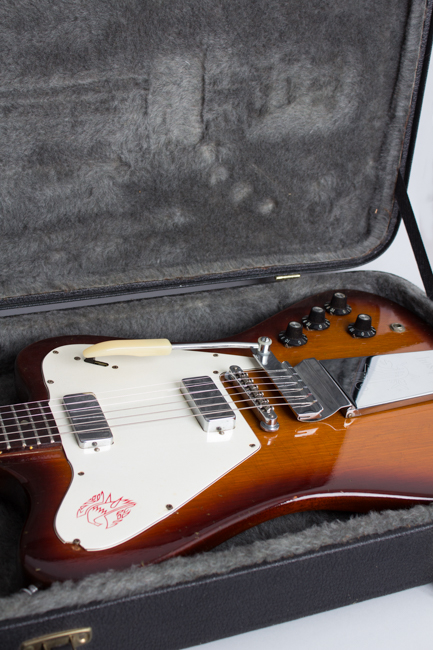 This instrument is a 1966 "Non-Reverse" Firebird V, one of Gibson's less heralded 1960s classics. These second-try Firebird models were lower-priced, simplified versions of the earlier "reverse" body guitars that had been launched in mid-late 1963. Introduced in summer 1965, these new model Firebirds were available into the late 1960s in dwindling quantities, but were never really considered a sales success. This example of the upscale Firebird V is finished in the standard 2-tone sunburst like most but is still a very striking guitar, distinguished from the lower-end models by its two special Firebird mini-humbucking pickups, Tune-O-Matic bridge and Gibson's long lyre-decorated vibrato tailpiece.

The body is mahogany with a one-piece glued-in neck, far simpler to build than the earlier laminate neck-through-body Firebird design. The fingerboard is unbound and dot inlaid; the earlier V had fancier appointments with trapezoid inlay. All these second series 'birds were built on the same body and neck, simplifying production greatly and allowing the prices to be lowered considerably. The Firebird V features two of the special Firebird-specific mini-humbucking pickups with no exposed polepieces; all earlier 'birds were so equipped but the 1965 revision changed the lower-end models over to single-coil p-90s.

Typical for 1966 this guitar has all chrome-plated hardware, including the Tune-O-Matic bridge and Vibrola unit. This guitar has the inexpensive slider switch provided for pickup selection used on most non-reverse Firebirds. The knobs are the newer "witch hat' style just introduced this year, while the tuners are a single Kluson Deluxe strip, not the cheaper openback Japanese machines some '66-8 Firebirds received.

The visible pot codes on this particular guitar date to the 46th week of 1965 and the serial number indicates 1966, so this is a fairly early example of this style 'bird -- one of only 342 shipped out that year. The neck is narrower than earlier reverse Firebird necks, but not quite as insubstantial-feeling as period SG necks.

This is a great-sounding guitar, with two bright but powerful Firebird pickups that really growl when cranked. While the "non-reverse" Firebirds have often been discounted in Gibson history, they are very distinctive guitars unlike any other and are often excellent instruments. Light, slim-bodied, fast-playing and very stylish, this all-original Firebird V is an very nice example of an oft-underappreciated Gibson model; an unrepentant rocker's guitar.

This 'bird remains all original and relatively clean overall, showing signs of play over the past 55+ years but no abuse. The finish shows some dings, dents, scrapes and chips overall but no large areas of wear. The pickguard has some shrinkage issues like most with the top and lower tips missing and a repair around one other screw; the bird logo is cleaner and better preserved than many. Most importantly this guitar has escaped the unfortunately common 50-year-old Firebird malady and had NO headstock or jack area cracks. This is a very good player with a lively sound; the original case has gone missing but the guitar is housed in a quite functional if slightly oversized hard shell that protects it better than Gibson's design did. Overall Excellent - Condition.
×