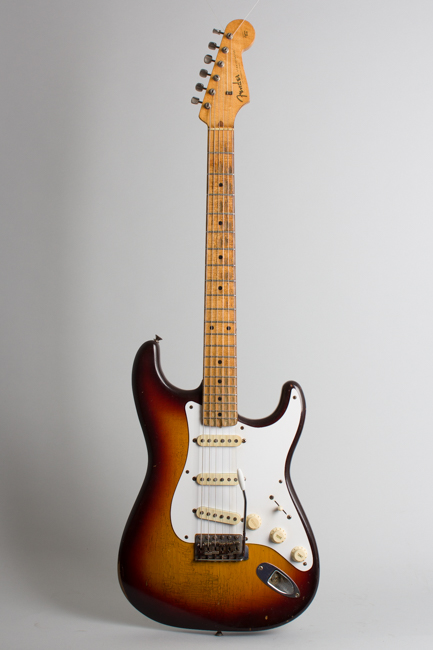 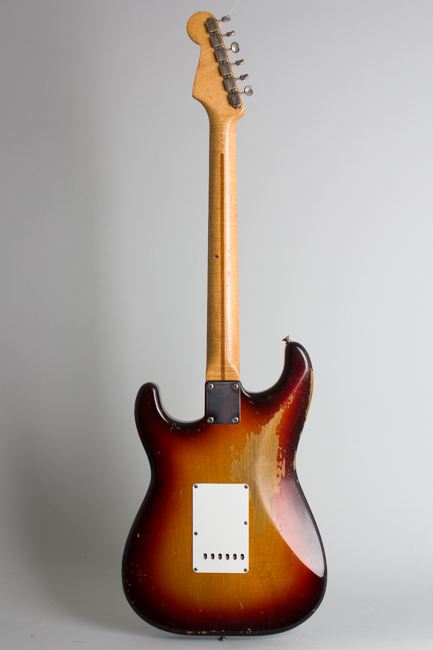 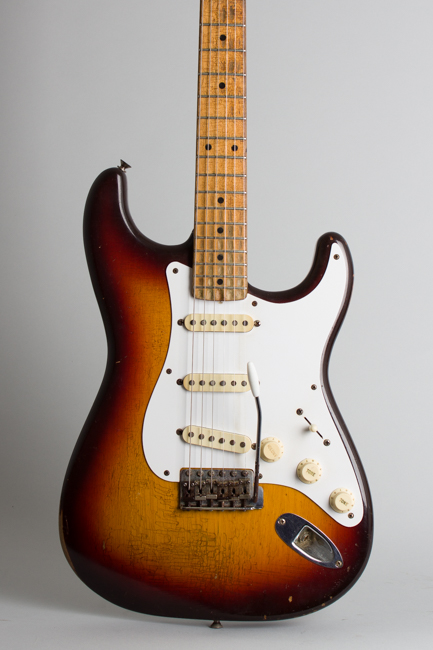 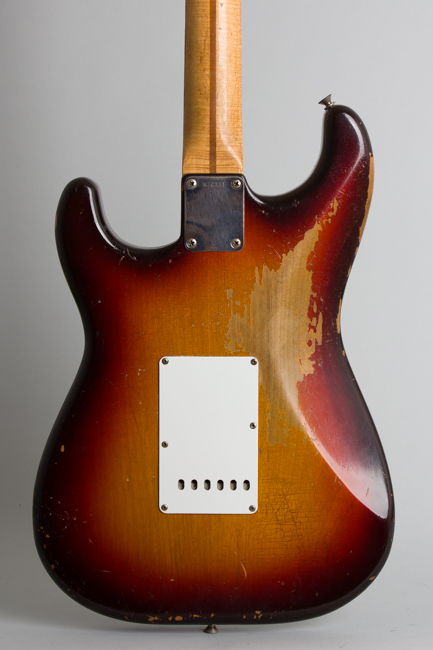 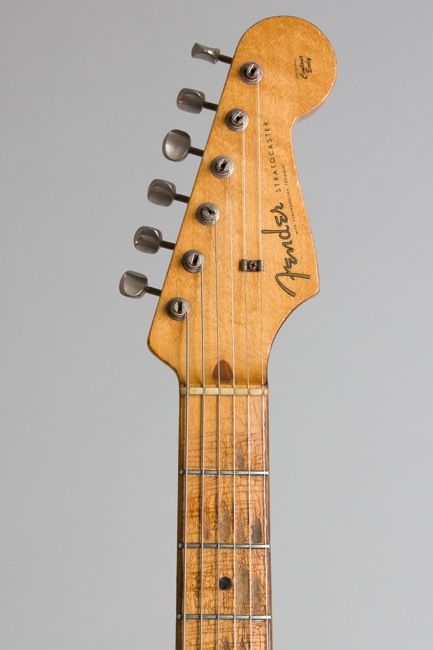 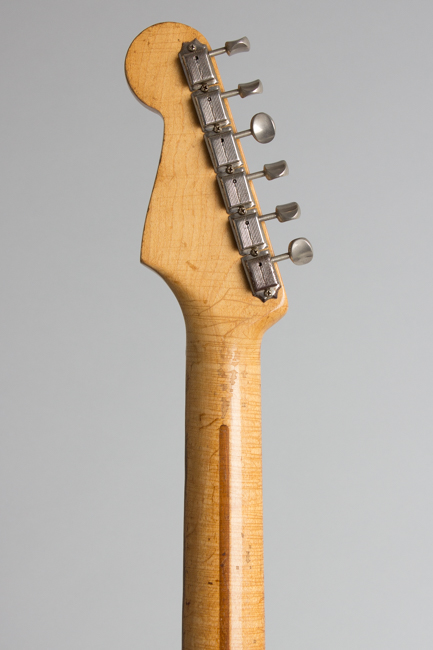 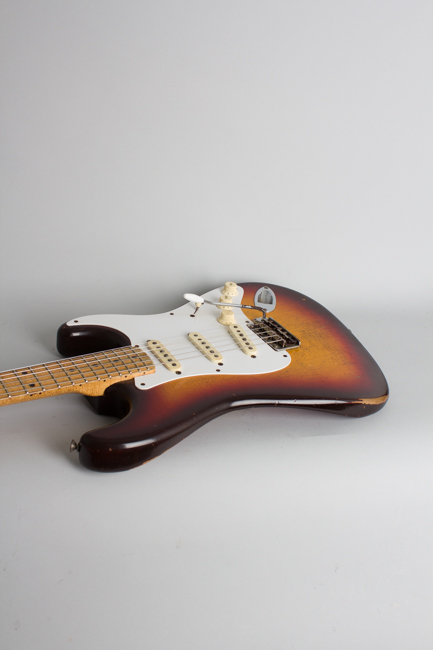 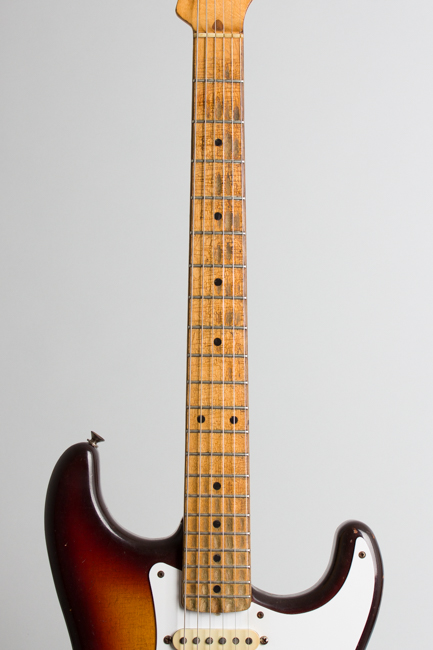 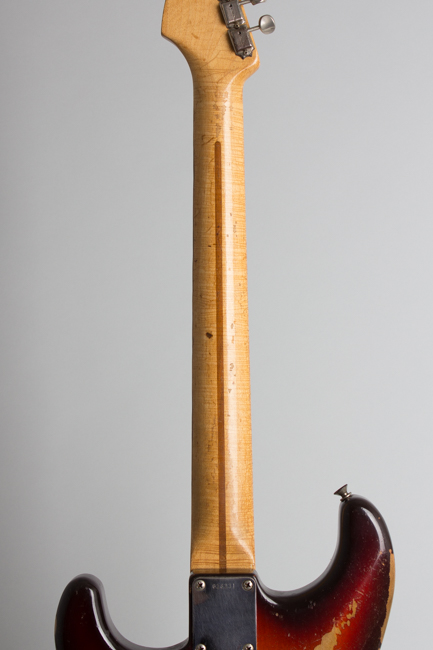 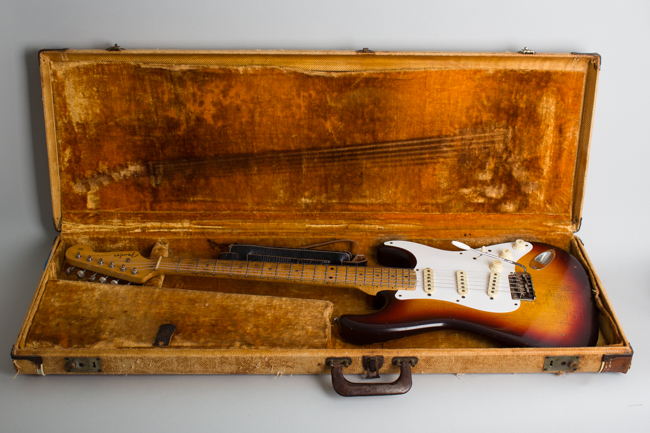 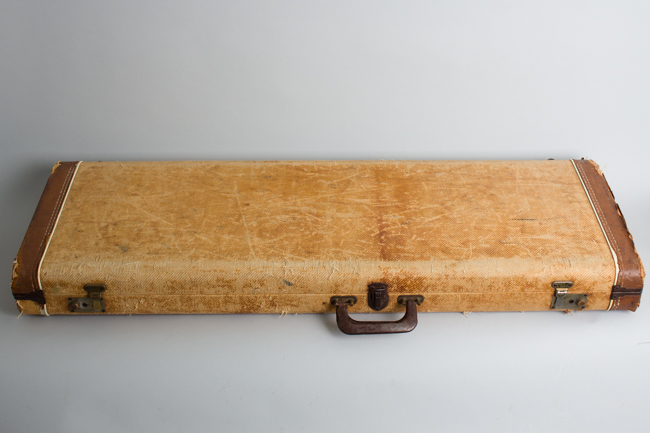 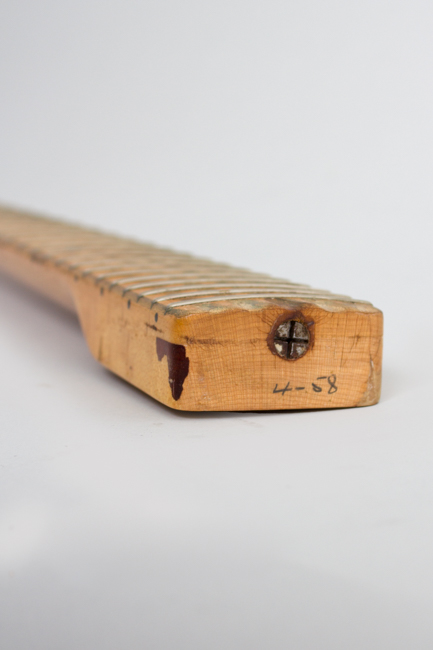 This superbly worn-in Stratocaster is a beautiful true Fender relic dating to the spring of 1958. About four years after the model's introduction, this was JUST before the Jazzmaster made its debut as Fender's new top-of-the-line later that year. When this one was built he Strat was still the most futuristic fretted instrument on the market and the prime showpiece for Fender. At the time the Stratocaster was starting to really "take off" with blues and rock'n'roll players, from Otis Rush to Buddy Holly ranging well beyond the Country players it was originally designed for.

This guitar's beautifully sculpted alder body sports the recently introduced 3-color sunburst lacquer finish which added a red layer to the previously more staid two-tone livery. 4-58 is penciled in the center pickup cavity; the great-feeling round-profile one-piece maple neck is also pencil dated 4-58. This was just a few months after the 1956-7 "V" profile was superseded by this more subtle rounded shaping. The fingerboard was refretted long ago but the neck remains otherwise unaltered. Other typical '58 features including the single-layer plastic pickguard, white pickup covers and knobs and Kluson Deluxe tuners remained as before.

This Stratocaster has been played a lot over the past nearly 65 years but "under the hood" remains original and unaltered. Beneath the pickguard is a beautiful matched set of pots date coded to the 27th week of 1957. The pickups, wiring and solder joints remain original. The neck and bridge pickups sound great, the middle pickup has a middling output level but reads as an open coil, something we are finding with increasing frequency on Strats of this vintage. The other two offer the typical '58 shimmer and "quack" and the three-way switch has a very solid feel selecting the "in-between" tones easily; these now have a less "out-of-phase" character due to the weak center unit. This pickup can be seamlessly rewound to original spec as desired; for the moment we have left it as it stands since nothing internal has ever been worked on.

Despite having apparently seen a lot of use the guitar managed to avoid the indignities that many old Fenders went through like refinishes, humbucker routs, jumbo refrets, and locking tremolos. It remains as Leo and his crew intended, a versatile playing tool and a tone machine par excellence. It is simply a wonderful-feeling 8.2 Lb. guitar and a great reminder why the world fell in love with the Stratocaster in the first place!

This is a beautifully weathered and naturally "reliced" nearly 65 year old Stratocaster with some fairly heavy wear but original with no alterations except a predictable refret. The three-tone body finish shows less fade than many, with a strong red layer off the yellowish center. It does have a LOT of heavy checking to the face and a collection small dings, scrapes, and dents; most noticeably to the back with the deepest just off the edge of the trem cover. There is less upper body arm wear than usual but a scuff mark from the trem bar being rotated across the lower face, not too obvious but visible.

The neck shows a lot of typical checking as well, with some fairly deep fingerboard wear running up to around the 8th fret area and some deep divoting at the treble end of the board from strumming. Whoever but the bulk of the wear into this guitar liked to play with their picking hand over the neck! There is finish rubbed through heavily on the treble side edge, but the remainder of back of the neck has the lacquer more intact than one might expect, with only smaller dings and chips. The neck was refretted some time ago with wire just a bit bigger than the original. The frets retain a vintage character and shows some fairly minor subsequent wear and at least one recrowning.

As noted above the electronics rig is untouched but the center pickup is weak; it has a lower than usual but functional output and reads as an open coil. As the guitar has never been worked on beneath the pickguard we have left it fully original but a practically undetectable rewind can be arranged. For the player who ignores the middle PU (you know who you are!) this can be put off for now. The pickup covers are in good shape, somewhat yellowed (as are the knobs) but not worn or cracked.

All other hardware appears original except some of the bridge saddle height screws, likely replaced due to corrosion long ago. The saddles themselves and other screws and springs remain original and show a decent amount of wear on several. The trem bar and springs are original; the guitar is set up with 4 springs, the 5th apparently having gone missing long ago. One of the screws holding the trem cover has a stripped head, making it hard to remove but the cover can easily be swung aside for restringing and maintenance without difficulty.

This Stratocaster is one of those "Real Relics" it is fashionable to artificially re-create these days. It is worn but not abused, and comes by its scars naturally. It feels fantastic and as it stands is a great sounding "two-and-a-half-pickup" guitar ripe for restoration to full glory. It still resides in the original yellow-lined tweed HSC, which has a lot of wear (the ends are partially worn away, some of the seams are loose and the handle is down to the metal frame) but still does the job. Overall Very Good + Condition.
×