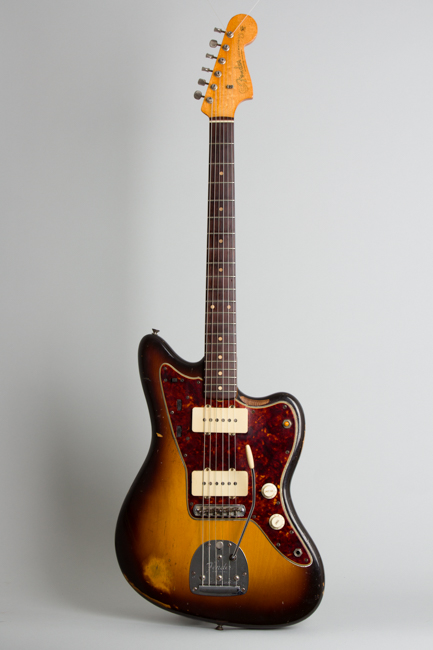 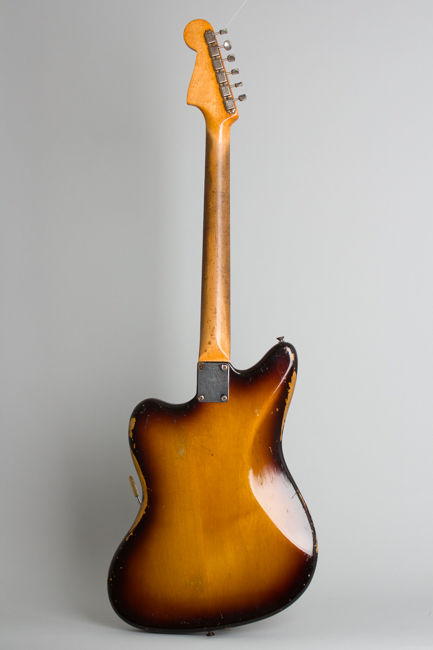 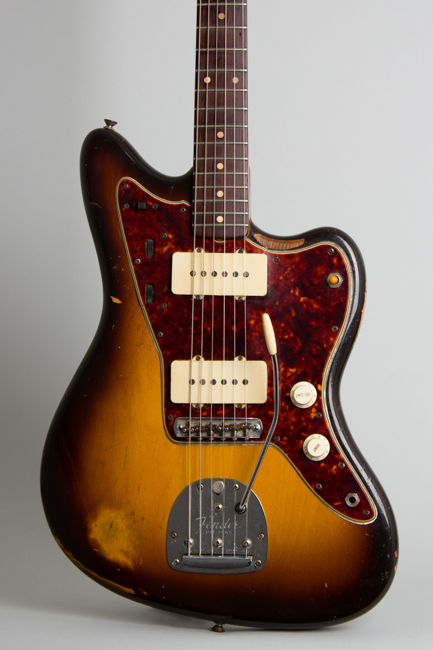 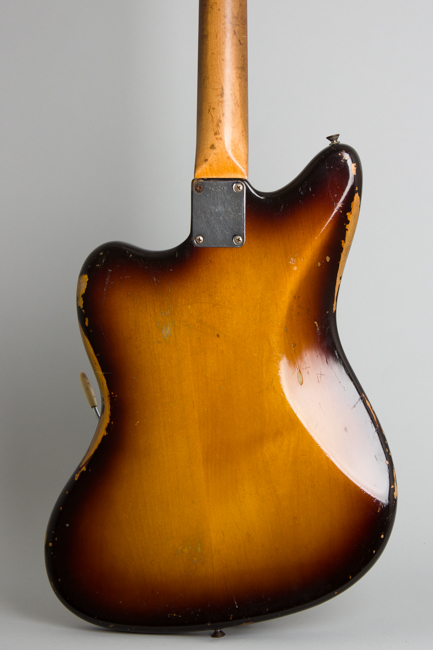 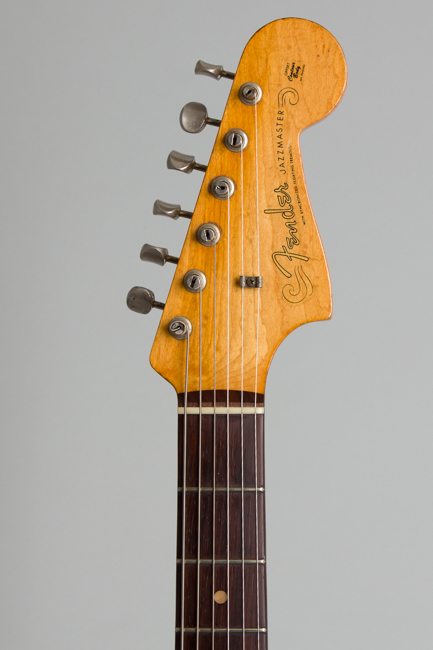 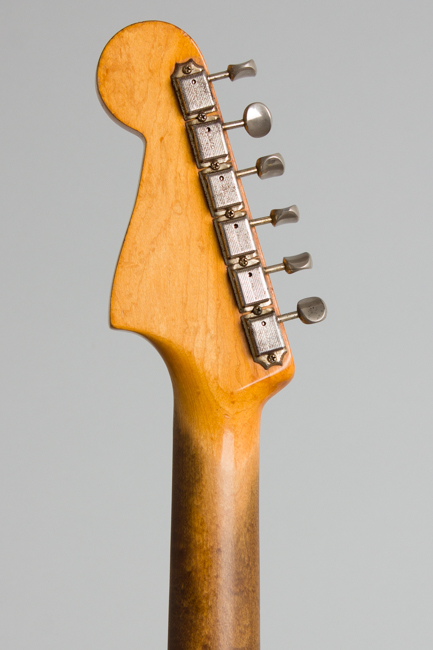 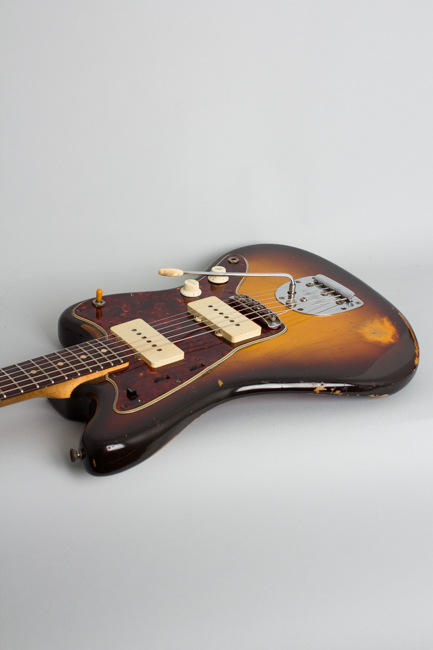 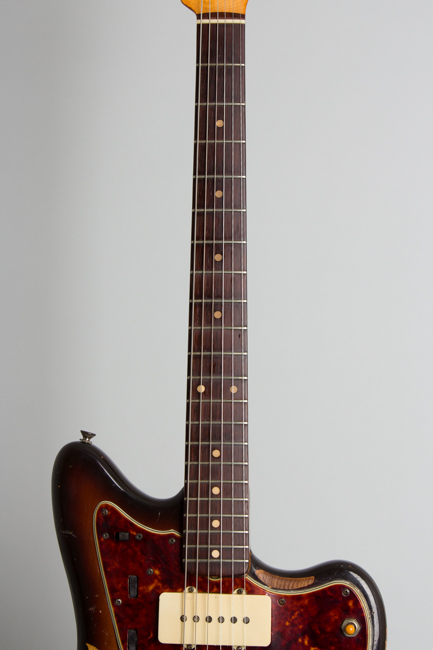 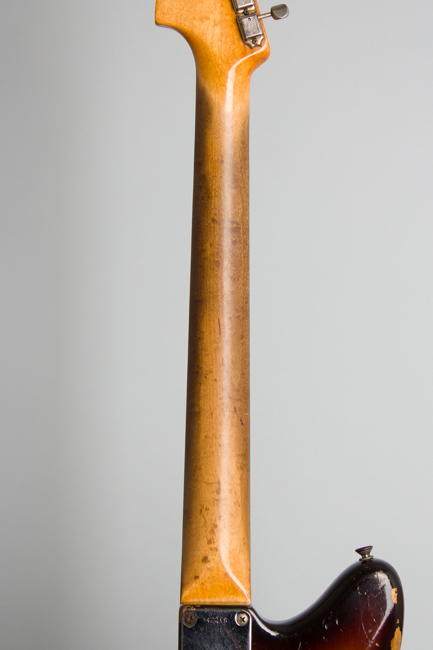 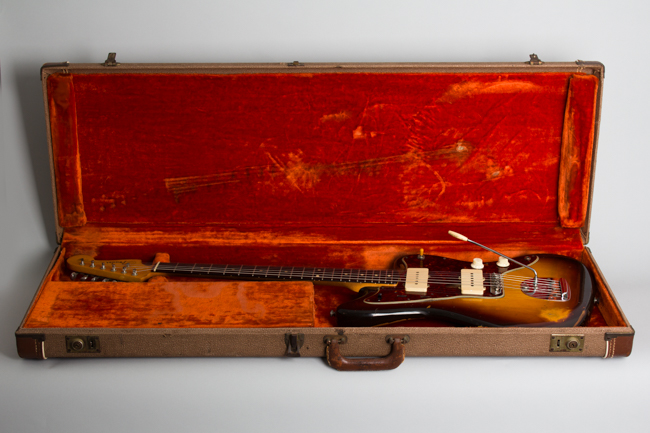 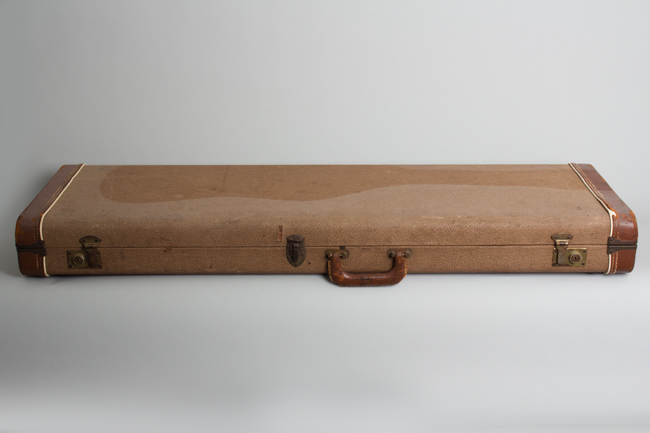 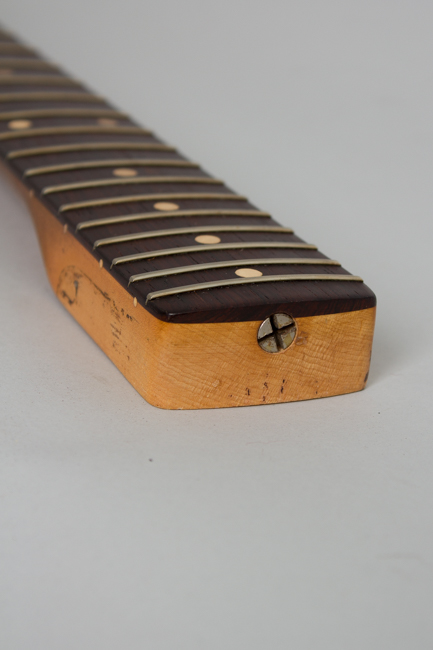 This worn-in but super vibey Jazzmaster is from late 1959 is a cool early example loaded with a bevy of classic pre-CBS Fender features. These include the first-generation thick slab unbound rosewood fingerboard with "clay" dot inlay, beautifully faded almost 2-color sunburst lacquer finish on the body and gold "Spaghetti" logo headstock decal. The pickguard is the tortoiseshell pattern nitrocellulose that was a brand new Fender feature at the time, having just replaced the gold anodized guard over the summer. This guitar has no dates is penciled on the neck heel or body but the original pots date to the 26th and 37the weeks of 1959, so the guitar was likely assembled and sold late that year.

These 1950s Jazzmasters are usually exceptionally fine instruments, then sitting at the top of the Fender line with a unique feel and sound. This one has a bit of figure to the maple neck, especially the headstock face. While they never did catch on much with the jazz artists Leo intended them for this was a radically new and quite successful guitar at the time, seen with many period players across a variety of musical genres. 1960s instrumental Surf'n'twang players took to them in droves, as did many R&B and Country musicians.

After a long period in the shadows the Jazzmaster has been increasingly popular over the last couple of decades with new generations of performers re-discovering its particular charms. This guitar has been heavily played but remains largely original and sounds exactly as it should, with the bright but slightly deeper wide-range tone character specific to the Jazzmaster. The infamous heavily played Jazzmaster that has been Nels Cline's longtime signature instrument is also a 1959 from this same period. It rests in its original brown Tolex hardshell case.

Overall this is a well used but generally original guitar with a great vibe, showing a decent amount of typical wear overall but maintaining the classic vintage look and feel. The all-original lacquer finish is not much checked but has heavy fading to the red in the 'burst, giving an almost two-tone look. There are dings, scrapes, dents and rubbed away spots to the entire body finish, with a lot of scratches and small dings on the back and a good deal of edge wear, especially on the bottom side. The top has a decent sized area rubbed away in the typical armwear spot, a couple of scrapes above the pickguard and noticeable wear through the lacquer into the wood on the lower cutaway, presumably from someone reaching hard for the highest notes!

The neck finish is heavily worn to the wood over much of its length, giving the smooth and glorious "worn-in Fender feel" that modern-day relicers try so hard to emulate. The somewhat fragile original over-the-lacquer Fender decal is fully intact.

The lovely tortoise celluloid pickguard shows some wear and scuffing but comparatively little shrinkage, a common issue on early Jazzmasters. There is one small crack in the very thin spot by the upper tone control. The hardware is mostly original and complete, including the tuners, bridge, screws and trem system including the often-missing trem arm. The knobs are exact correct repros.

The pickups and covers are original, as is the bulk of the wiring including the switch and all pots. Newer foam has been added beneath them to preserve adjustability. The leads off the bridge pickup are correct style cloth wire but do not exactly match the other wire, they appear old but may be replacements. There is no visible evidence the pickup was ever rewound, but we cannot absolutely rule it out. In any case both pickups sound fantastic in every position, with a real ring that mellows out nicely in the rhythm position.

The metal parts show some general wear and corrosion, mostly to the bridge. The saddles are all original, some of the height adjustment screws have been replaced likely to preserve adjustability when they rusted out. The neck has been refretted and the fingerboard trued, the wire is a bit taller than the original spec. The nut was replaced as well. The original factory shim is still in the neck pocket, with an extra small cardboard piece added later. A previous owner wrote his name under the pickguard long ago.

This guitar has seen a lot play time since the 1959 but still plays and sounds great, a Jazzmaster that really sings. This is a real veteran that has weathered many decades still in its original brown Tolex case. This is fairly clean and solid with no broken latches or hinges, just an odd "ghost" image on the lid where another smaller shaped case must have sat for years! Overall Very Good + Condition.
×