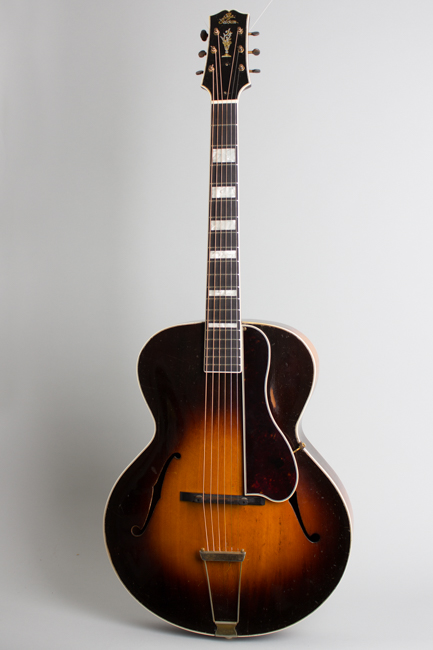 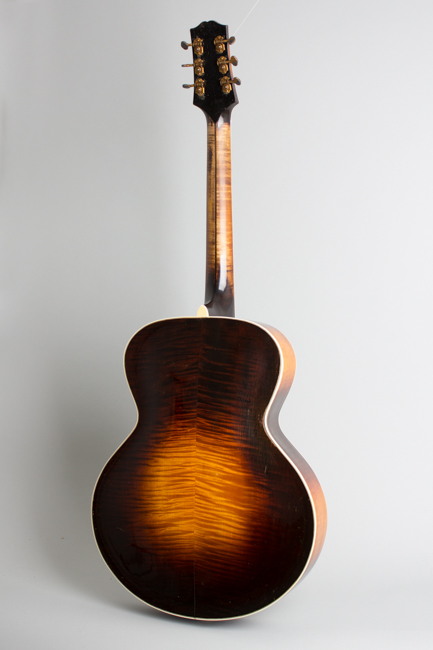 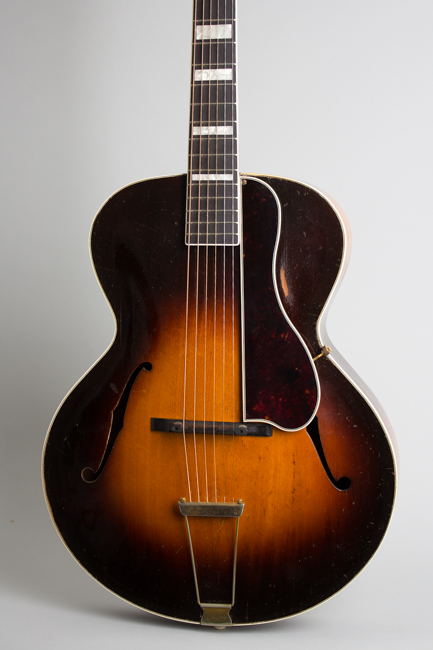 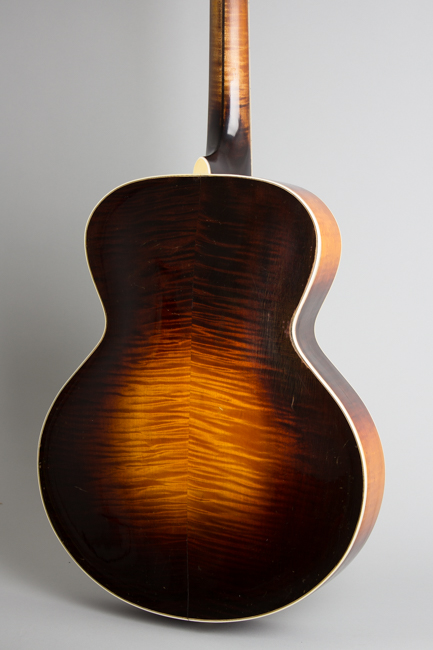 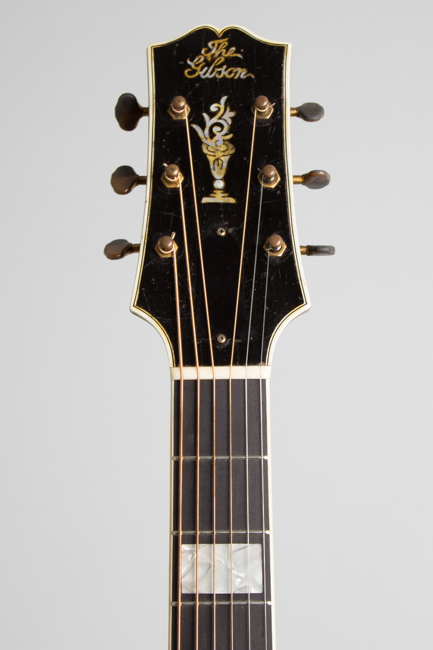 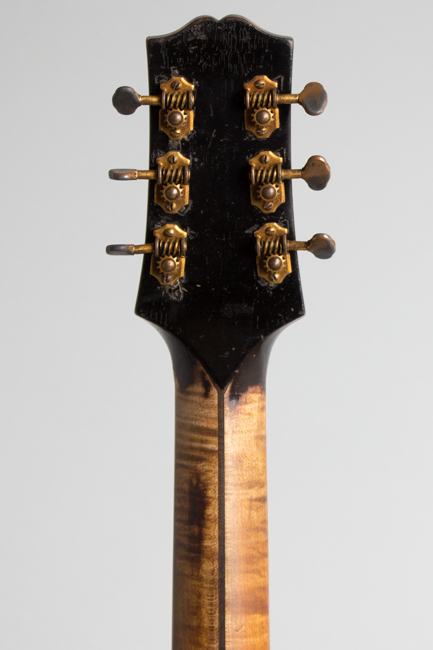 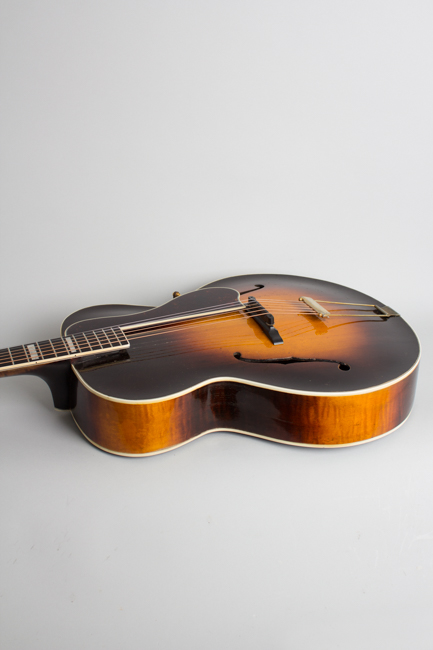 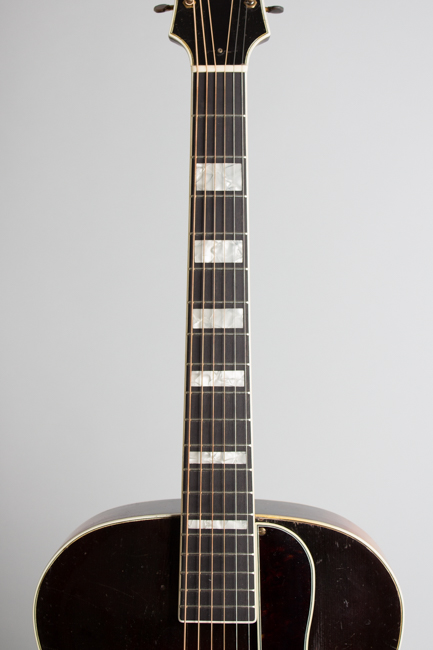 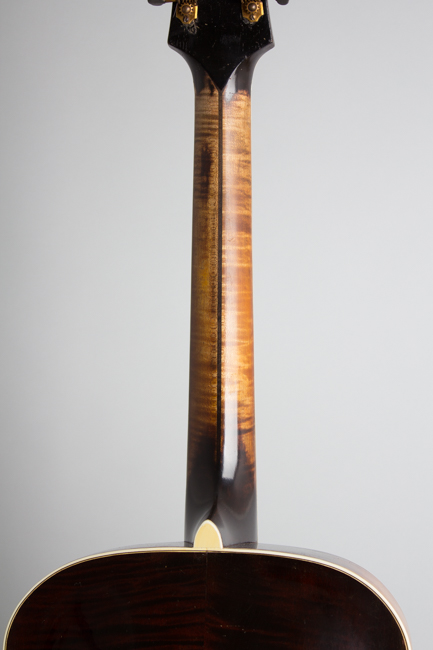 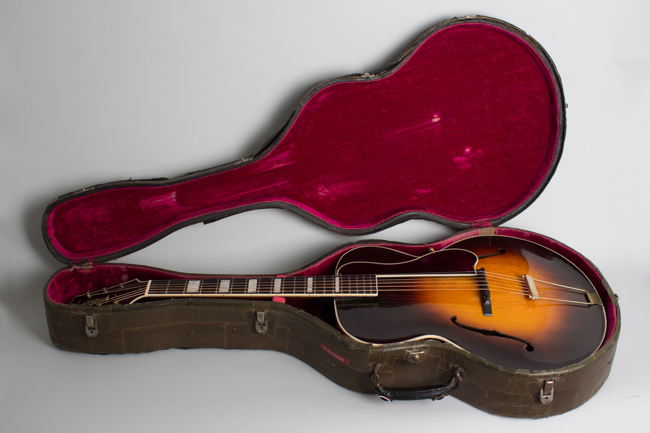 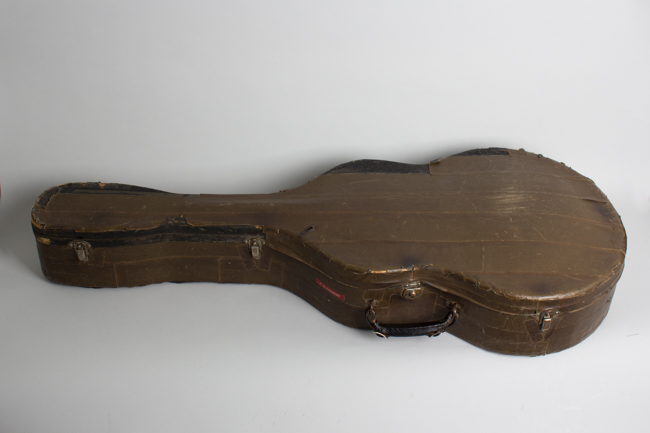 This 1934 L-5 is a fine example of the pre-eminent orchestra guitar of its era -- the original f-hole carved top guitar -- an extremely fine-sounding instrument by any standard. Many of these L-5's were used by the top players of their day; this guitar has an unusually well documented provenance, detailed by the original owner's son. It was bought new in 1934 by Oliver "Ollie" Matthewson, who went on to perform with and do arrangements for several swing-era artists, including the smoothies and most notably Woody Herman. Included with the instrument are some original 78 discs it was used on, a CD re-issue of some relevant Woody Herman recordings and a collection of notes pertaining to Mr. Matthewson's career as a professional swing musician.

Even discounting this provenance the guitar is a wonderful instrument in itself. Debuting in 1923-4, the L-5 was the first modern F-hole archtop, a design still followed today. When this one was built about ten years later it was still the top of Gibson's line, considered by most players the finest orchestra guitar made. Ollie Matthewson bought this instrument in Buffalo NY in 1934; at that time and place an L-5 or Epiphone's Deluxe were the only really functional choices someone looking to break into the ranks of top professional guitar players. Eddie Lang, the era's most influential guitarist, used a 1920s dot-neck L-5, then an early block neck L-5 starting around 1931, to set the trend. From that time on the L-5 gave Gibson a dominance in orchestra guitars they never really lost.

That said, these early 16" L-5s are fairly rare guitars. Retailing at $275.00 (plus case), this was an extremely expensive instrument for the time (the top-of-the-line Martin pearl-trimmed Style 0M-45 retailed at $100.00 less). At the height of the Depression, only working professionals with steady salaries could afford such an indulgence. Mr. Matthewson's son recalls his father paying $300 for this guitar new.

It shows typical features for the early -mid 1930s 16" L-5; the transitions between variants are inexact at best. Based on the features and serial number this guitar was likely built in early-mid 1934. At that point the new 18" wide Super 400 and companion 17" wide "Advanced" L-5 were in the design stages but his original style L-5 still ruled the roost. In practice this was not an instant transition; some players preferred the older L-5 and examples were still shipped from Kalamazoo for several years onward.

The top, back, and sides on this guitar carry a beautifully blended dark sunburst finish; the back is tiger maple with a pronounced figure. The top and back are triple bound in white celluloid. The braces are the "kerfed" style used in the early 1930's, a production expedient allowing faster build times. While this has become a much-discussed feature of late, we do not find tremendous sound differences between the L-5's of this era regardless of how they were braced.

The side-line bound, straight-end ebony fingerboard is a correct style replacement with pearoid block inlay. The 3-piece laminated curly maple neck has a fairly slim "V" profile, though not as pronounced as some examples. The pearl inlaid flowerpot in the triple-bound headstock with a straight across "Gibson" logo above are hallmarks of the 1932-35 L-5 as are the older style, gold plated Grover G-98 tuners with riveted gears and metal "butterbean" buttons. The long triple-bound celluloid pickguard is screwed to the top by the neck block. The tailpiece is the 1930's "string through" piece; the adjustable ebony bridge is the split base style used on most L-5's in this period.

This instrument has a very even and versatile sound typical of these early L-5s; simultaneously warm and incisive with plenty of depth. It plays very comfortably and is extremely responsive for an archtop guitar...it even sounds lovely fingerstyle! Most of these 1930s L-5s were played extensively for many years, some owners preferring them to any other guitar. They can be seen in the hands of recording studio players well into the 1960s. As constant working guitars, they were often modified, refitted, or refinished with little regard for originality. This example has had some careful restoration to its original state and comes with an interesting archive of its life "back in the day". It is another delightful and inspiring example of one of our all-time favorite instruments, with an estimable history behind it.

This L-5 shows some general wear and tear but remains a delightful survivor in excellent structural condition. The finish shows some typical wear, with checking, scratches, dings, dents overall and a few areas of loss to the lacquer. The top shows a number of pick scratches and dings, a small burn mark next to the bass side soundhole and an area of pickwear through to the wood below the treble side of the pickguard. The back of the neck was worn through to the clear undercoat over much of its length from play, giving it a beautiful silky, worn in feel.

The body shows several tightly sealed grain cracks. A one and a half inch crack straddles the waist on the bass side of the top and two short cracks on the treble side next to the tailpiece. On the bass side rim, there is a short sealed crack in between the waist and the apex of the lower bout: there is a similar short grain crack in more or less the same position on the treble side. The center seam on the back, running from the tail block for about four inches, has been resealed as well. All the work is neat and inconspicuous. There is a minor finish disturbance on the top near the fingerboard, a telltale sign of an old floating DeArmond pickup having been there.

The ebony fingerboard, white-black-white binding, frets and pearloid fret markers were all replaced to exacting detail to match the original factory specifications. This includes the vintage spec. fretwire and celluloid and binding material that replicates the original. At the same time the neck was reset ensuring excellent playability. The bone nut is newer, the tuners are original and they and the tailpiece show some plating wear. The headstock at one point mounted larger tuners, the holes have been filled and the original tuners and bushings re-fitted (luckily they were retained after the modifications). The back of the headstock shows some scars from this but the face has only light pressure rings around the bushings.

The tortoise celluloid pickguard is a correct, triple bound, a reproduction of the original which is included but has begun to deteriorate. The bridge top is a replacement, made in the original pattern but with slightly more mass; the bridge base remains original. The neck angle is excellent after the reset, and there is room for action adjustment in either direction if desired.

This lovely L-5 is still housed in the original case, which was covered (by Ollie) generations ago in heavy olive drab tape that has a sort of WWII look about it. Some of this has subsequently peeled off. The Handle is a replacement and "O.Matthewson" is applied to the side above it on a Dymo Tape label. This is not the most attractive original case we have had but is still solid and functional after a lot of use. The guitar inside is a truly delightful example of the later 16" L-5, a joy to play and to hear and just a classy guitar in every way. This one's provenance with a genuine swing-era history makes it even more of a special find. Overall Excellent - Condition.
×