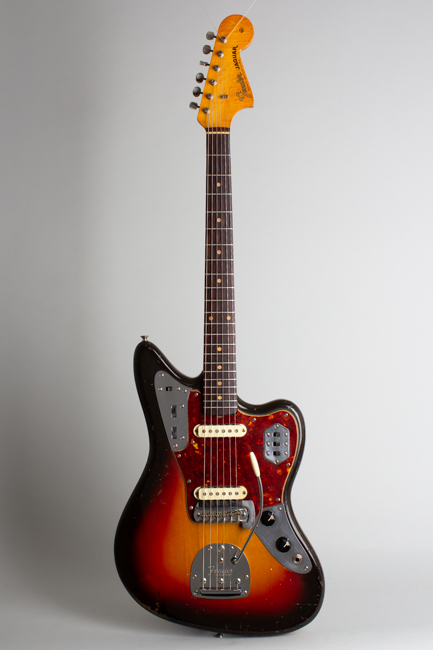 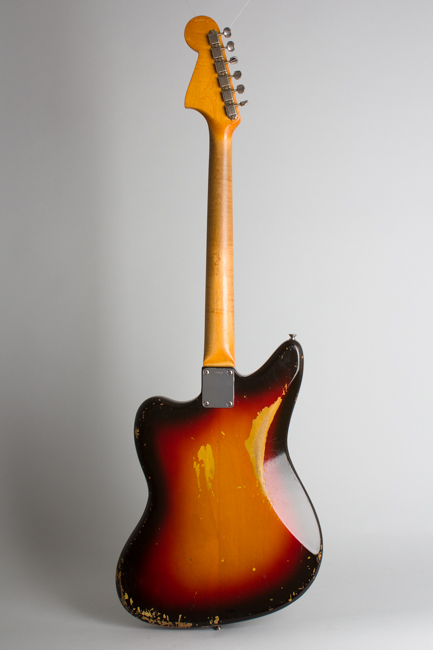 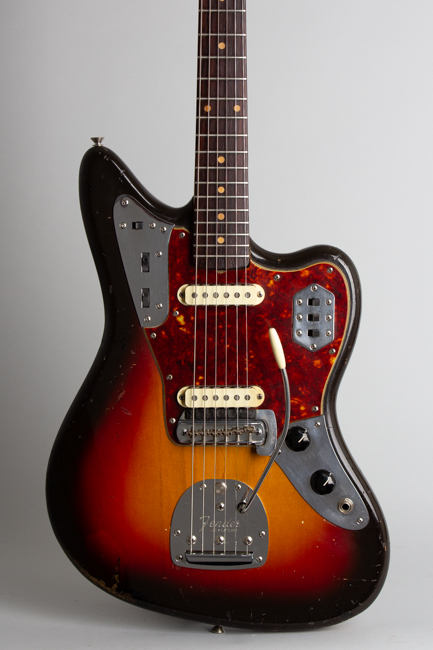 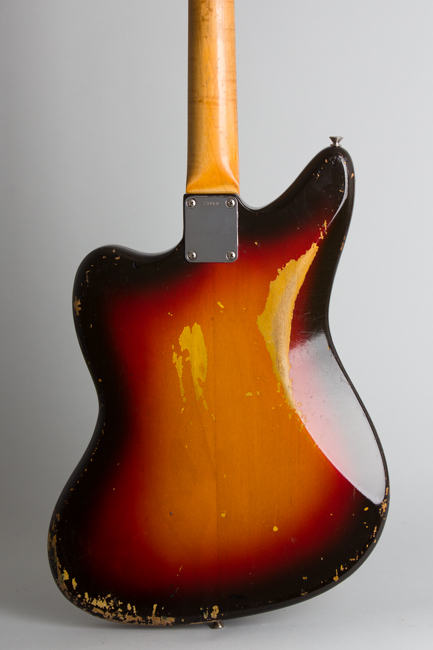 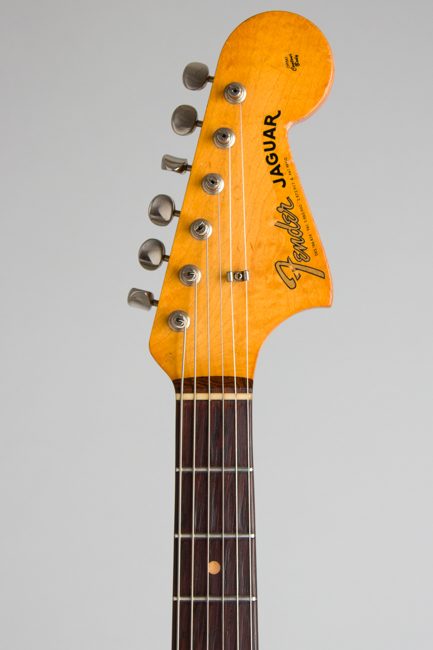 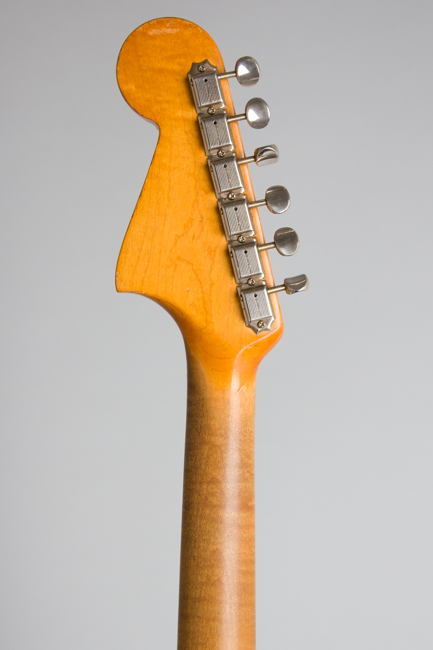 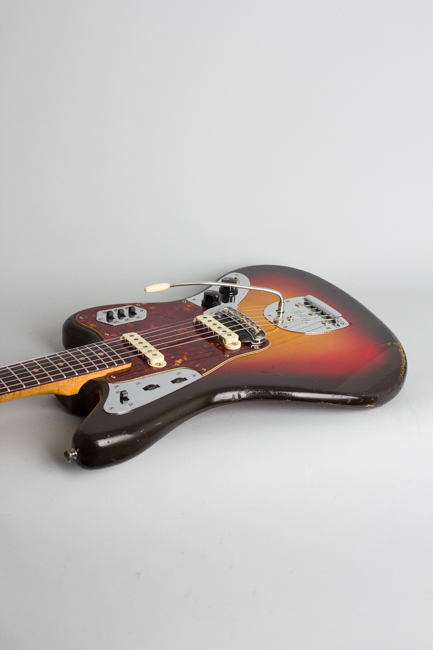 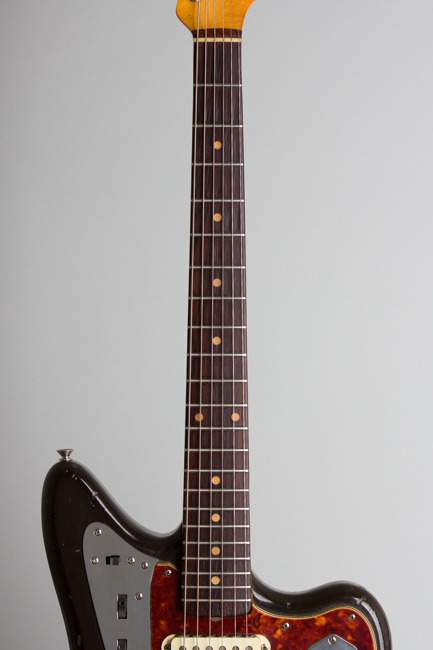 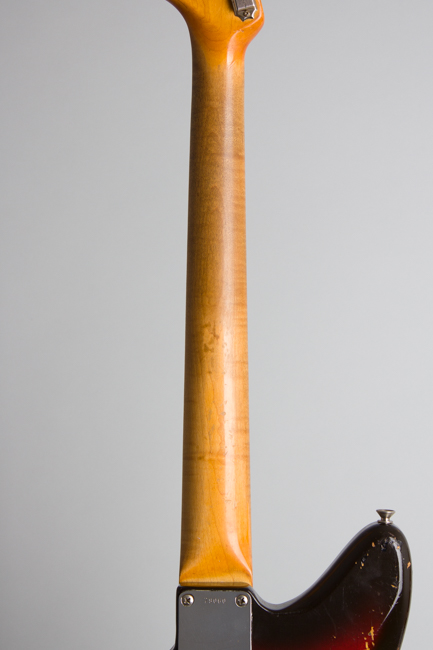 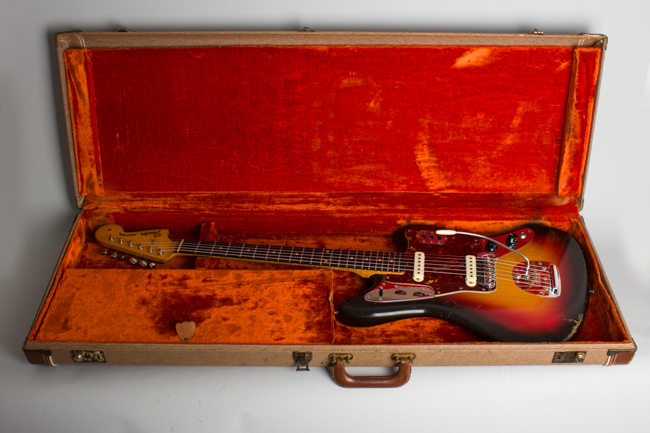 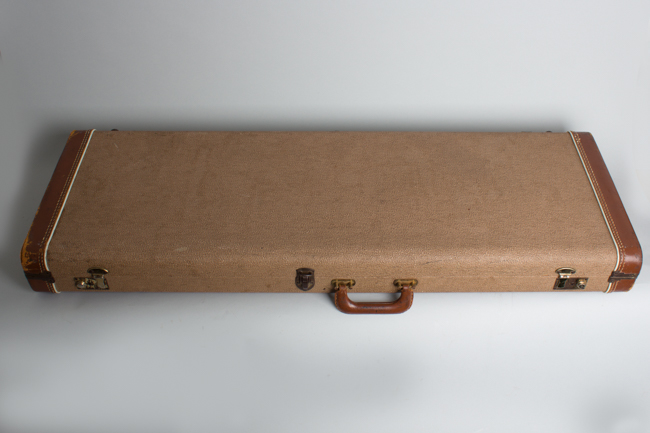 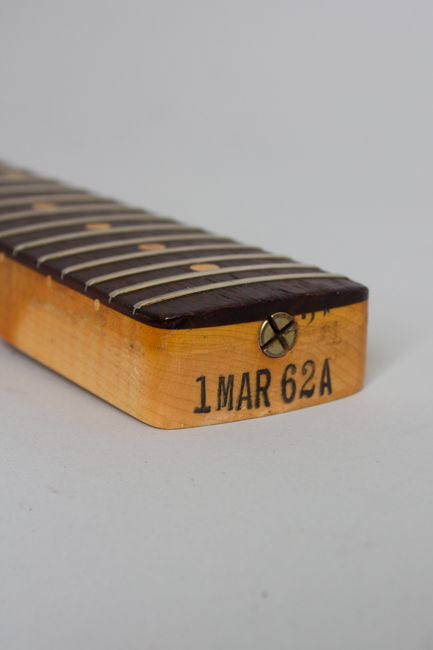 This lovely original first-year Fender Jaguar shows a decent amount of wear from decades of play, but offers a super vibey feel and a world of classic twang. It has one unusual feature; a rarely-seen 1 1/2" wide (at the nut) "A" neck, usually a custom order feature. The Jaguar debuted in spring 1962 as Fender's new top-of-the line; this neck is dated March 62 which indicates very early fabrication. It is possible Fender made an initial run of narrow "A" Jaguar necks to test the waters, or perhaps they even intended to initially release the guitar stock that way. This neck seems to have taken some time to get attached to a completed guitar; the pots are dated to the 32nd week of that year which indicates the instrument was not assembled until later in the summer, at the earliest!

At any rate this is still a very cool first year Jaguar. This flashy chrome-dazzled guitar was a serious status symbol for many types of combos in the early '60s, especially California teen bands. Apart from the slimmer nut this one has typical first-generation features. including an unbound thick slab rosewood fingerboard with clay dot inlay, deep blended 3-color sunburst, tortoise pattern nitrocellulose pickguard and gold "transition" Fender logo decal. The neck has more flame figure than most Fenders from this period, mostly on the back but some visible on the headstock. It is possible this was a specially selected blank for the "A" neck finish-out.

Despite a strong recent revival over the past decade, the Jaguar remains a historically under-appreciated guitar with several interesting features. The model features the same vibrato unit and rhythm/lead circuit as the Jazzmaster with the addition of individual on/off switches for the pickups making the "Jag" a flexible guitar with a lot of sonic options. This one has particularly bright and twangy pickups and really sparkles in any setting.

The Jaguar's scale length at 24" is shorter than the other pro-grade Fender guitars, the same as the student-grade Mustang, Musicmaster and Duo-Sonic. Combined with the Jazzmaster floating tremolo unit this means the guitar is very supple to play but performs better with heavier gauge strings. The two single-coil pickups have metal "claws" underneath the coil and are optimized for clarity, punch and crispness. This guitar has a particularly nice sounding set with plenty of sparkle. This combination of factors caused the Jaguar to fall from popularity in the late '60s as twang went out and string-bending with heavy distortion and crunch came in!

Nevertheless these chrome-trimmed California hot rods are still the top-of-the line '60s Fenders; quite popular when new and extremely high quality guitars. This one includes the original mute...the foam has reduced itself to the consistency of 50-year-old chewing gum but can be replaced if desired. This interesting Jaguar variant has been a very well-loved guitar, definitely someone's gigging instrument for some time and still a great-playing and sounding Jag. We often find 1962 Jaguars to usually be the pick of their litter and especially good instruments; this slim-necked one is no exception.

This is a well-played guitar, a bit of a true relic showing evidence of hard use but still remaining nicely original. While there is a decent amount of wear overall, the finish on the face does not have large areas missing as is sometimes found on heavily-used Fenders; there is some fairly heavy belt-buckle wear on the back. The sunburst has kept its deep red hue; it is not heavily faded and there is less checking than many, mostly some lateral lines on the body. There is a large collection of mostly smaller dings, chips and scrapes overall. The finish is most heavily worn on the bottom edge of the body running around to the back and upper armwear area; some touch ups from various vintages are visible on close inspection but nothing is obnoxious.

The back of the neck is heavily worn down mostly to the bare wood and feels fantastic, with that classic "old Fender" vibe. The headstock finish is just lightly "smoked" with some minor dings and dents; the decal is intact with a few small dinks missing in the gold Fender logo. The guitar has been nicely refretted with period correct wire, with just a little subsequent wear; there is some minor wear to the rosewood fingerboard.

The chrome shows less wear and is cleaner overall than one might expect; all hardware is complete and intact except for the snap-on bridge cover which is long gone. The trem arm is original but has been carefully re-curved by a past user into a slightly more swooping profile. The original brown Tolex case is still fairly clean and fully functional. All-in-all this is a GREAT-playing and sounding early Jaguar, a bit ragged but right, the sort of genuine relic you just can't create artificially, although folks are constantly trying these days. Overall Very Good + Condition.
×