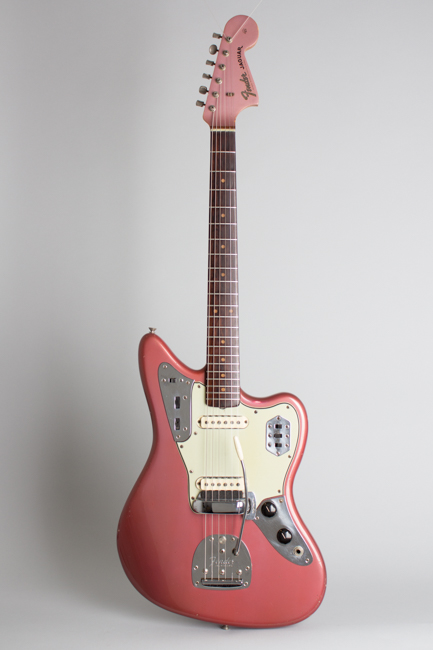 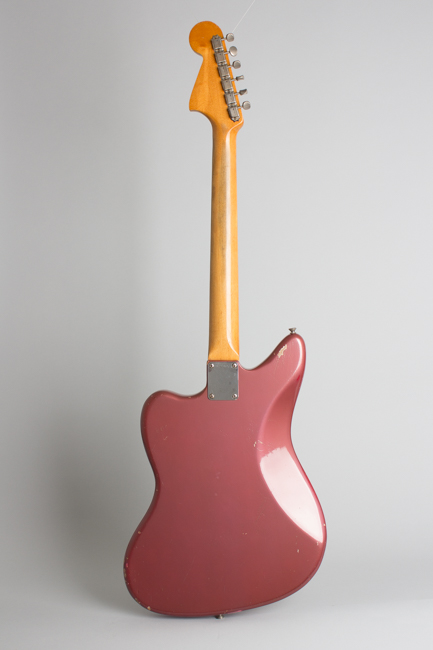 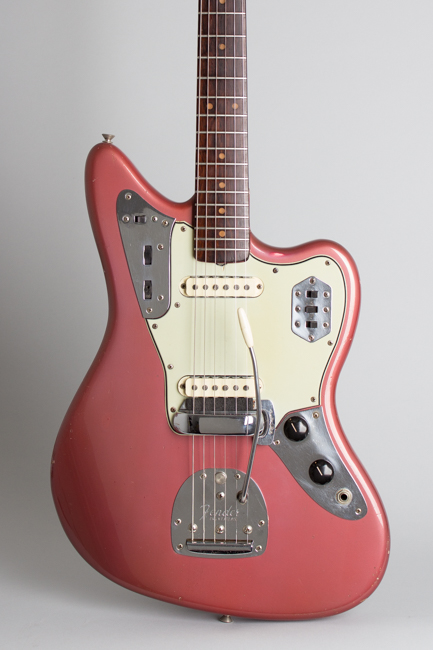 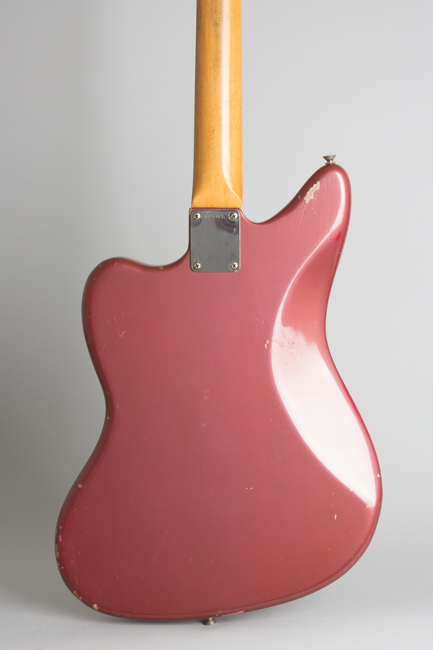 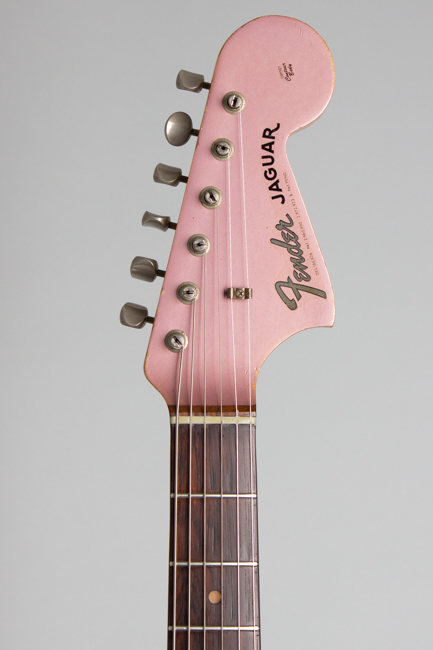 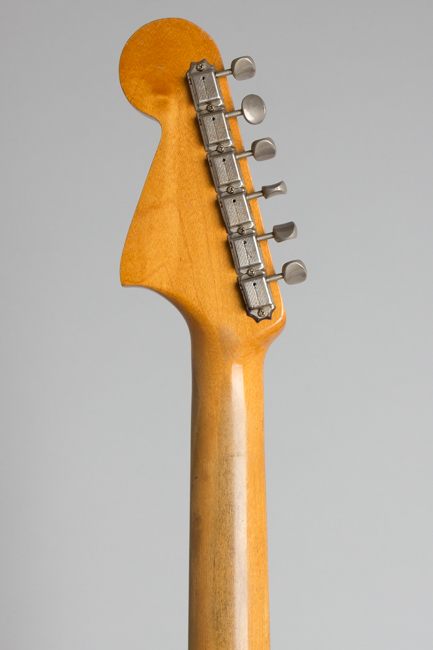 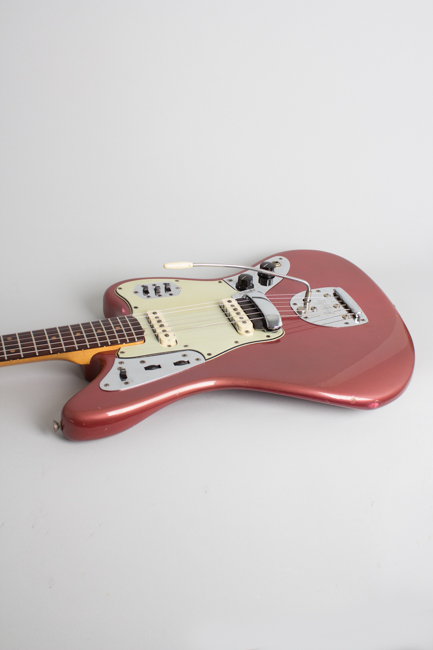 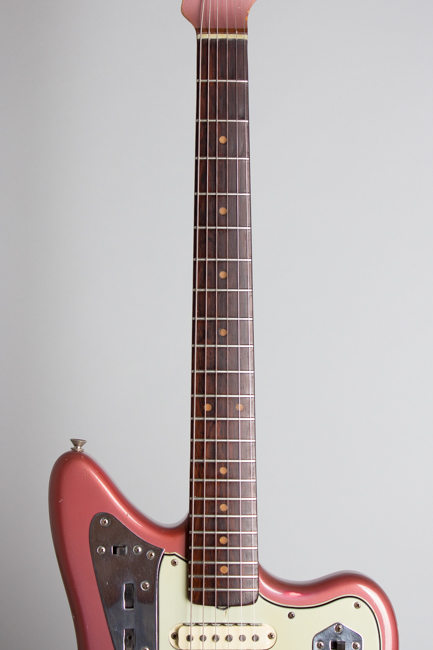 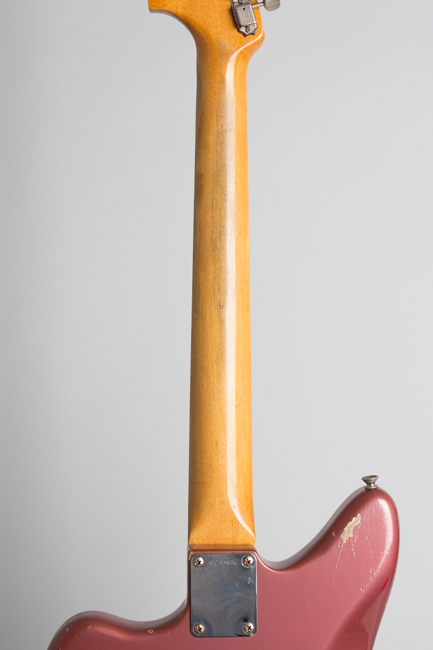 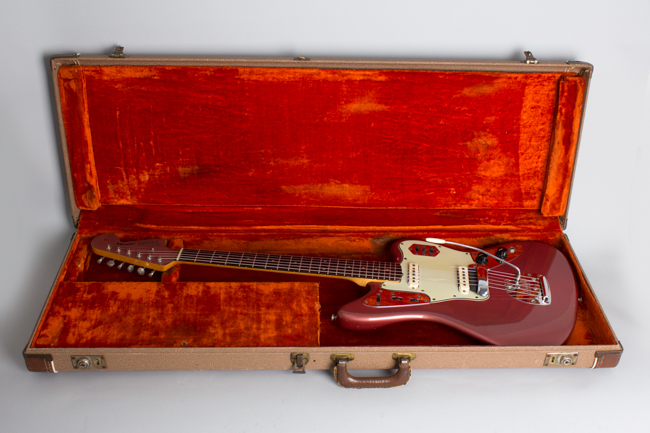 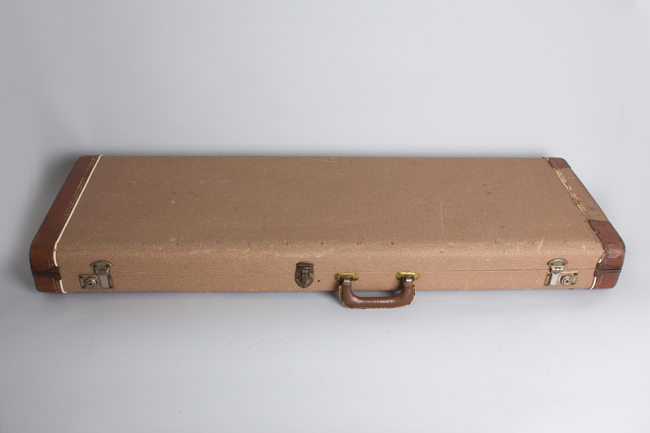 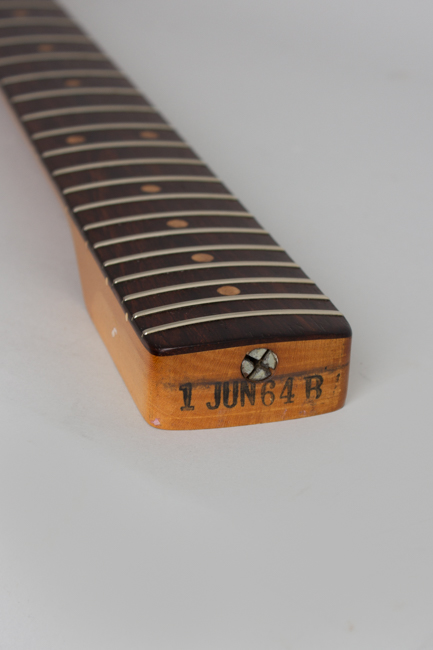 This is a very rare and exceptionally cool Pre-CBS custom-color Jaguar, a real six-string hot rod resplendent in one of Fender's rarest 1960s finishes, Burgundy Mist Metallic. This super flashy Jag looks and sounds fabulous and in its purple-and-chrome livery and carries a classic mid-'60s hot rod vibe. If Big Daddy Roth was looking for a guitar to pinstripe for Rat Fink, this Jag would have done the trick!

Burgundy Mist is famously NOT one of Fender's more popular custom colors; looking at this one it's hard to see why but the reds, blues and white far outsold it. The bold metallic light purple came direct from the California custom car palette, and the Jaguars' chrome accents make this instrument look fast just sitting still! While all Custom Color fenders are much scarcer than the standard sunburst, Burgundy Mist Metallic is one of the least often encountered and of the few that do exist most date to 1965 or later, not the true Pre-CBS era.

This guitar IS a fully Pre-CBS example and has the typical look and feel for 1964, with the classic features from the period just before CBS took over in January 1965. The neck stamp is June '64 and pots are dated to the 21st week of that year, so this is a "summer of '64" special. The unbound rosewood fingerboard has the older clay dot inlay, the matching headstock bears the gold "transition" logo decal and the pickguard is still the beautiful "mint green" celluloid used since 1961 on most Custom Color instruments. The neckplate carries an "L" series serial number, which would disappear in late 1965.

Of late the once-ignored Fender Jaguar has returned to favor but still remains a somewhat under-appreciated guitar with a unique feel and several interesting features. It uses the same floating vibrato unit and rhythm/lead circuit as the Jazzmaster with the addition of individual on/off switches for the pickups, making the "Jag" a very flexible guitar with a lot of sonic options. The third "strangle" switch engages a small resistor that emphasizes the highs to cut through even better. The 24" scale length is much shorter than the 25 1/2" on other top-line Fender guitars, giving the Jaguar a much suppler feel. This also means the instrument performs better with heavier gauge strings compared to the other pro grade Fender models, a subtlety often lost on later generations.

The Jaguar single-coil pickups are generally similar to Stratocaster units. They are optimized for clarity and crispness, with a solid metal cage underneath the coil intended to concentrate the magnetic energy. Several of these factors combined led to the Jaguar fading from popularity in the late '60s as twang went out and "heavy" distortion and crunch came in! Still this was the top-of-the line Fender in 1964, and this one is in one of the rarest and most sought after finishes, a true 1960's relic and timelessly cool instrument.

This is a nicely original guitar, showing some signs of use and general wear but remaining nicely original and VERY sharp looking. The metallic purple finish on the body has retained excellent color with only VERY minor fading and yellowing when compared to the unexposed areas under the pickguard and chrome plates. There IS enough difference in these areas to confirm the originality of the finish; this effect is exceptionally difficult to reproduce. The matching headstock face does not have the same final lacquer clearcoat, so retains a slightly "purpler" hue compared to the body.

The worth-its weight-in-gold finish has generally worn well for its 55+ years on the planet. It shows minor dings, dents, and chips overall, but no really heavy areas of wear. The face is comparatively clean, with only some small marks most of which do not go through to the undercoat. The edges have some wear through the topcoat and dings, dents and chips, some of which were discreetly touched up decades ago. The back does not have the heavy belt buckle wear sometimes encountered, there are some dings and chips through to the undercoat, most notably on the upper horn. The edges of the matching headstock face have just a few small chips and dents.

The back of the neck and headstock appear to have been very lightly oversprayed decades ago. Much of this is now worn through again, in some places (notably the middle of the neck) down through to the wood. The neck feels great with the classic "old fender' vibe. The headstock face was NOT sprayed over, and the original decal is correct and fully intact.

All hardware remains original and complete inside and outside including the trem arm and snap-on bridge cover. The lovely "green guard" is in excellent shape with less shrinkage than many, and no notable cracks or pulls at the screw holes. The chrome shows only some very minor wear and/or corrosion. The bridge saddles are relatively clean with some light rust and all work properly. The patented Fender mute is still intact; the foam has been replaced with the correct strip material so it actually works quite well, though very few players bother to use it.

The guitar has been refretted nearly with wire in character with the instrument and period. The fingerboard was polished a bit during this process and the patina on the rosewood surface and clay dots is a little smoother than the average vintage Fender. None of this is distracting and this Jaguar not only looks spectacular, it plays extremely well and sounds great, both pickups being quite strong and rich with the twang of the ages. The original brown Tolex "no logo" Fender hard shell case is included with some general wear (some of the leather ends are worn off) but still fully functional. Excellent - Condition.
×