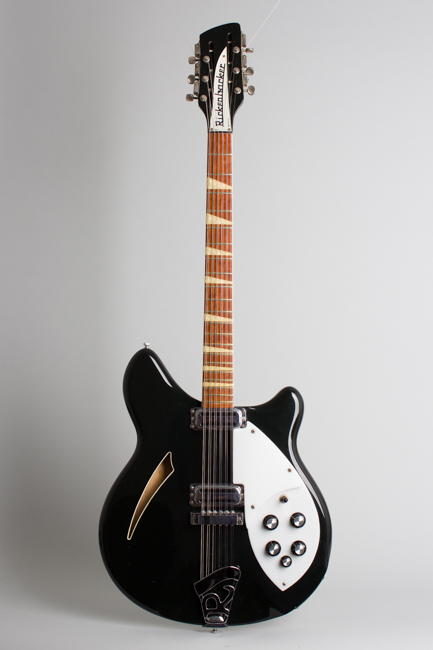 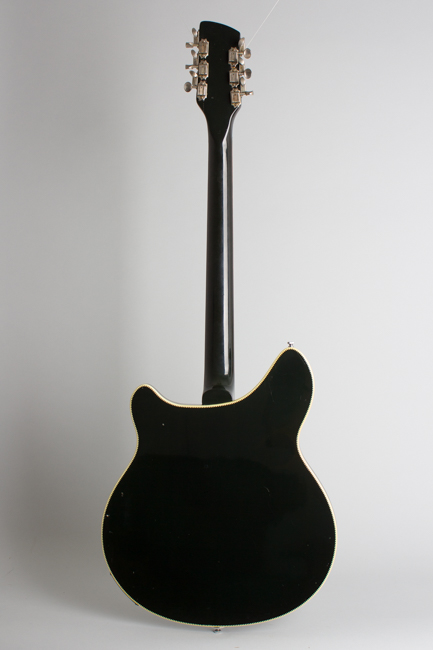 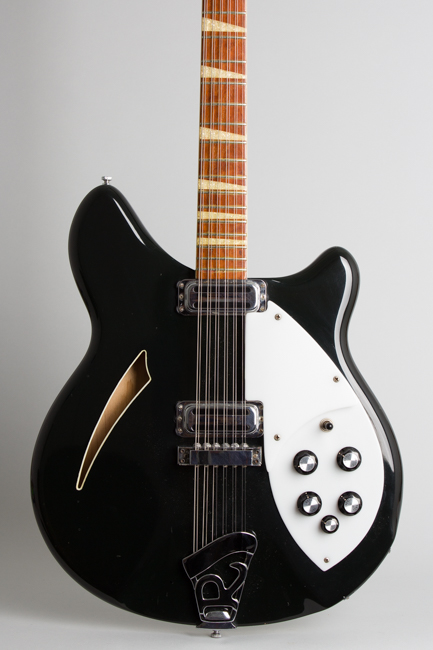 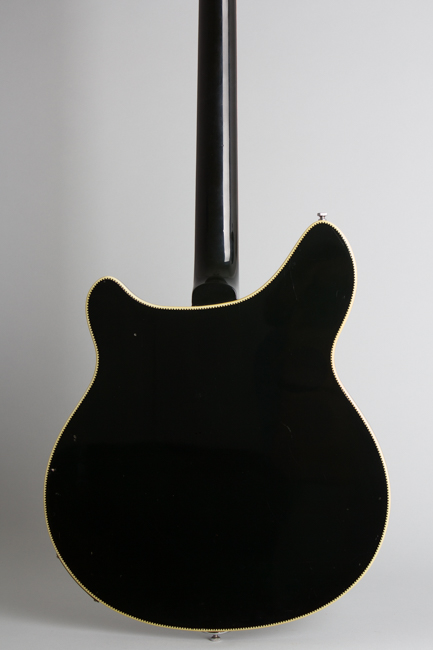 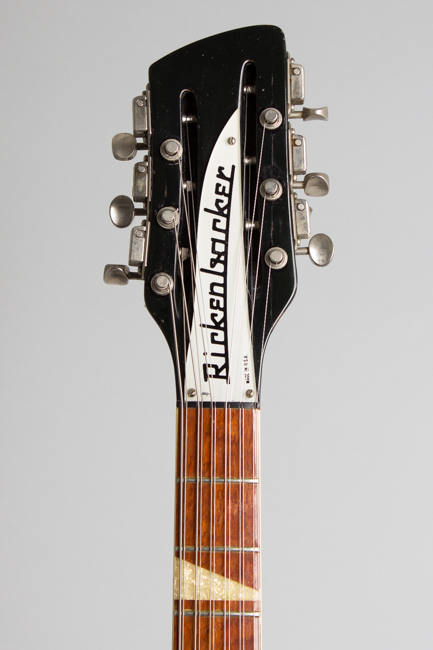 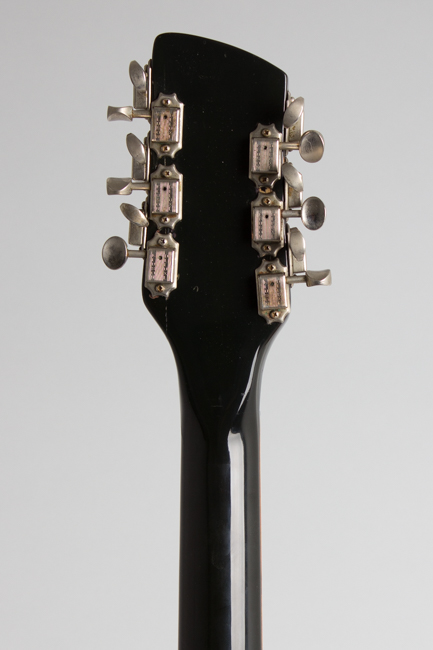 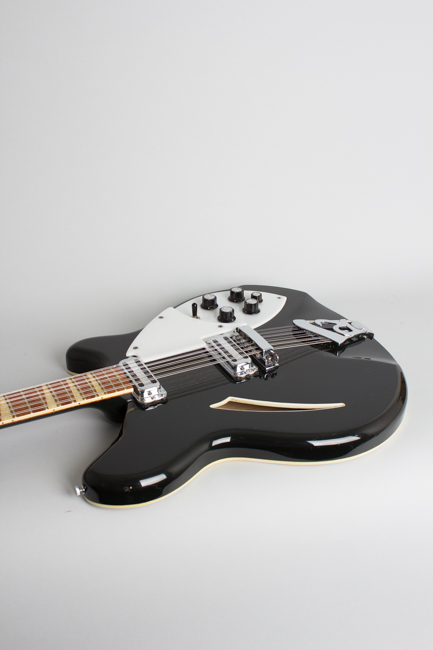 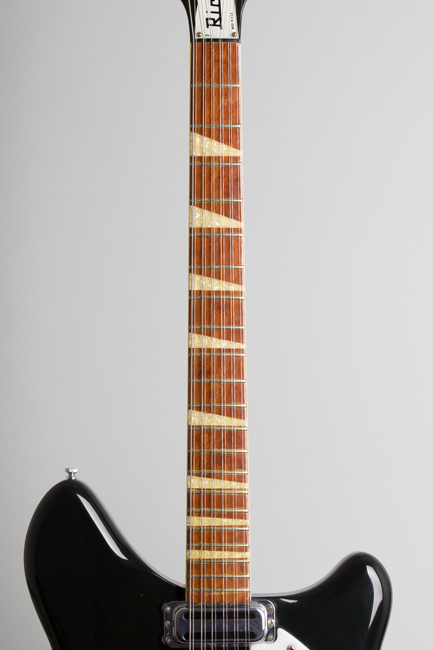 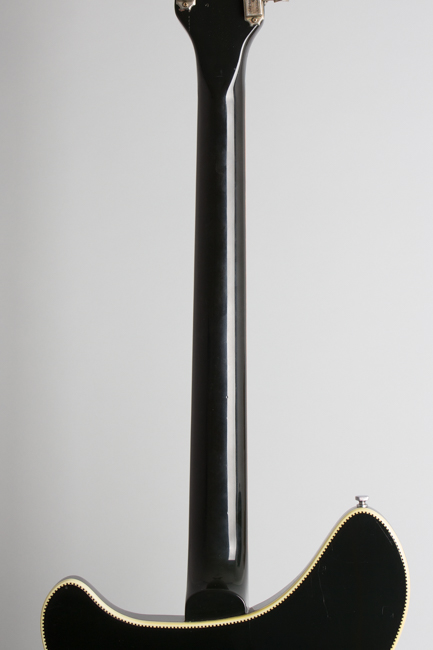 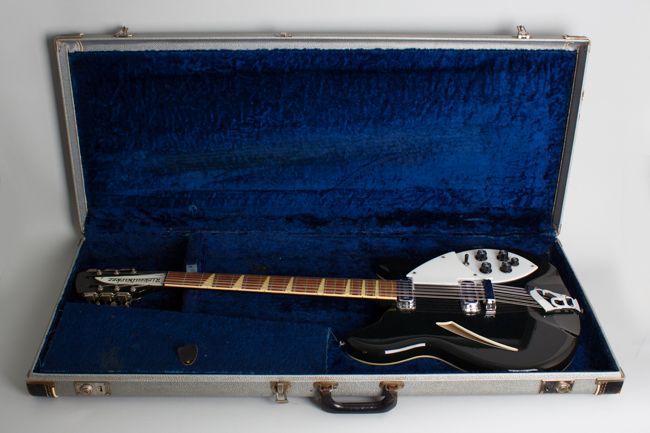 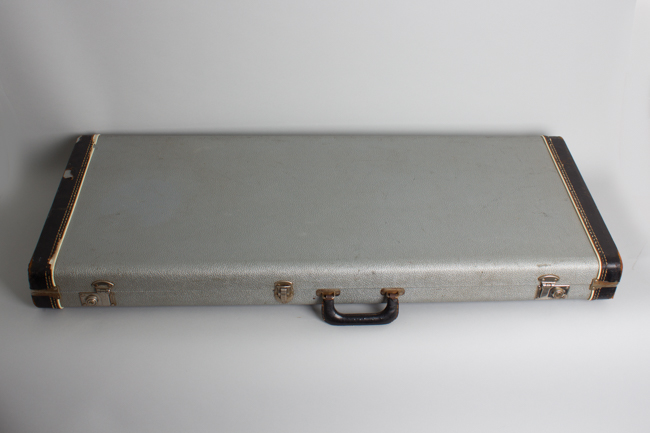 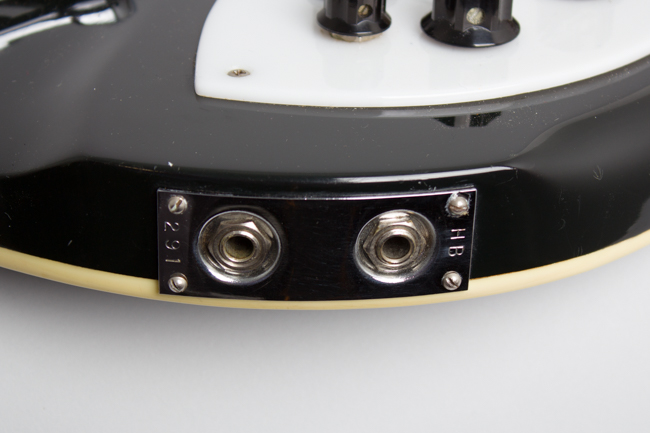 Jetglo! This is a superbly sharp-looking example of the relatively rare black-and-white finish option for the vintage Rickenbacker Model 360-12. This one has a serial number indicating it was made in February 1968, when the 12-string trend had already peaked and far fewer were being sold than in their heyday of 1965-6. The black finish was a catalog option but in practice not that often encountered compared Fireglo red sunburst and Mapleglo natural. It has had some restoration from a ill-fated tuner swap long ago but otherwise is in splendid original condition.

The Rickenbacker 360/12 is simply one of the most distinctive looking and sounding of all American guitar designs. A mainstay of the California company's line from 1964 up through to the present, the 360/12 is what really put Rickenbacker on the map as a modern guitar maker. In the mid-60s the entire "Folk Rock" sound was anchored by this one instrument.

The 360/12 is the "Deluxe" style Rickenbacker 12-string, with triangle crushed pearl inlay on the bound fingerboard, a round-top body bound on the back in checkerboard trim and a bound sound hole. It remains an icon of the '60s, synonymous with the original Folk-Rock sound as well as more recent "jangle" styles. The less fancy flat-topped models 330/12 offer much of the same sound but lack some of the iconic visual appeal of the 360/12.

A Rickenbacker 360/12 in the hands of Beatle George Harrison kicked off a wave of popularity for electric 12s in 1964-6 that left every other maker trying to catch up. This guitar a second generation 360/12 with the rounded top body design introduced in spring 1964, which is the most recognizable version. The Byrds' Roger McGuinn played a Mapleglo round-top 360/12 starting in 1965 and it became the iconic look for the model.

At the time this 360/12 was made production was significantly lower than the previous few years. While Rickenbacker instruments of this period are generally more consistent than many one production alteration is significant. Beginning in the summer of 1966, Rickenbacker no longer routed a channel for pole magnets under the neck pickup, so from that point on they have a much solider neck/body joint. As a result this one has maintained a better neck angle than many earlier examples, making for excellent playability.

Besides the Byrds this model saw extensive use by George Harrison (who adopted a round-top model in 1965), Brian Jones of the Rolling Stones, Al Nichol of the Turtles, Tony Hicks of the Hollies and countless others in the 1964-70 period. The instrument maintains a timeless "60s cool" factor to this day. Despite all the other electric 12-strings made since, the Rickenbacker 360/12 has remained the single dominant instrument of this type for well over 55 years. This "Tuxedo" Rick is one of the nicer examples we have had; While John Lennon never played this model the black-and-white look is the one most identified with his model 325s. From Beatlemania to Fuzztone this rare 360/12 offers the unmistakable sound and look only the original 360/12 can provide in spades.

This 360/12 remains a nicely clean guitar overall, showing only some light general wear. The only notable issue is the headstock shows some careful restoration work from having at one point had larger tuners fitted, probably Schaller minis. The wing on the treble side shows evidence of a repaired seam split, and the once larger holes have been lined back down to the proper size. The correct 1960s Kluson deluxe pegs are now fitted again, and the headstock has only topical touch-up, not a wholesale overspray. All work is to a high level but the headstock face still bears some scars from the operation. There is a very small typical under-the-fingerboard split on the treble side, not extending as far as the first fret and solid. Fortunately the black lacquer finish is very forgiving; a Mapleglo example would have been a tougher proposition to restore!

Apart from this area the guitar is very well preserved. The finish on the body shows small scuffs and dings overall but maintains a beautiful ebony patina with no really notable areas of loss, and a couple of small touch-ups. The back has some very light belt-buckle wear into but not through the lacquer. The back of the neck is very clean with just a few tiny dinks.

All hardware appears original, even the usually missing bridge cover is intact. The neck is quite straight and the truss rods are working correctly, the bass side nut has some signs of over enthusiastic use but is set up correctly now. The frets and fingerboard show hardly any wear. The neck angle is excellent (unlike many from 1964-mid '66) and this is a very fine playing example with the classic sound heard on countless recordings. It is complete in the original silver HSC, a superbly distinctive Rickenbacker 12 in the classic "Lennon" livery. Overall Excellent - Condition.
×