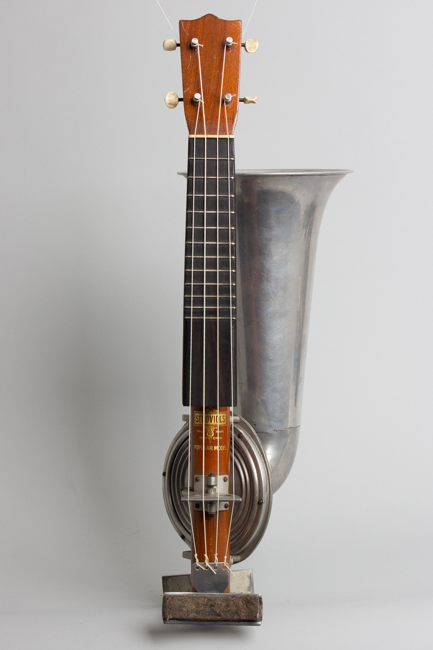 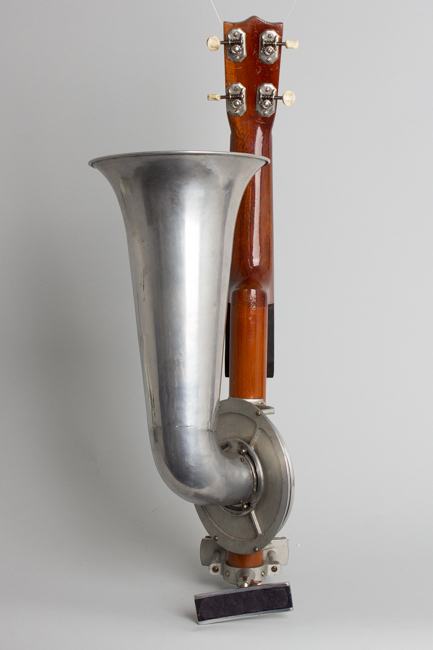 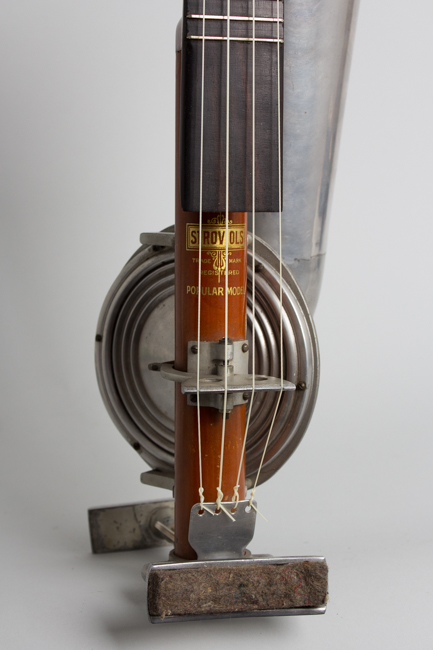 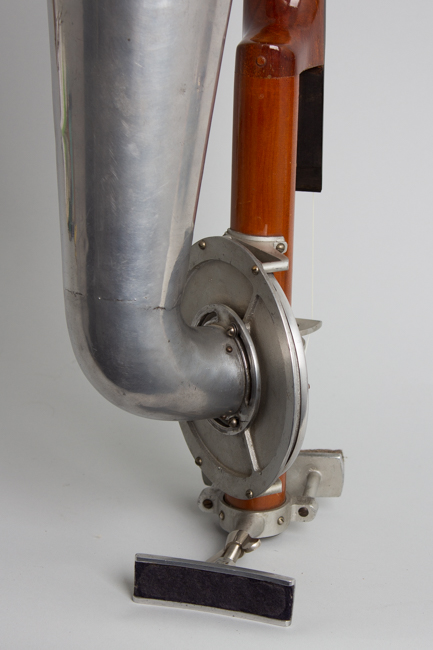 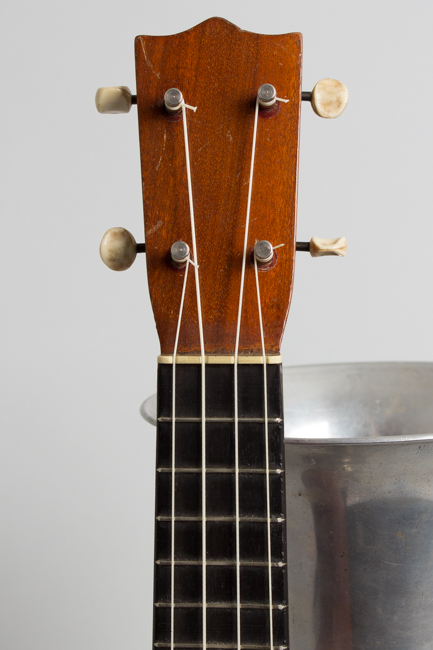 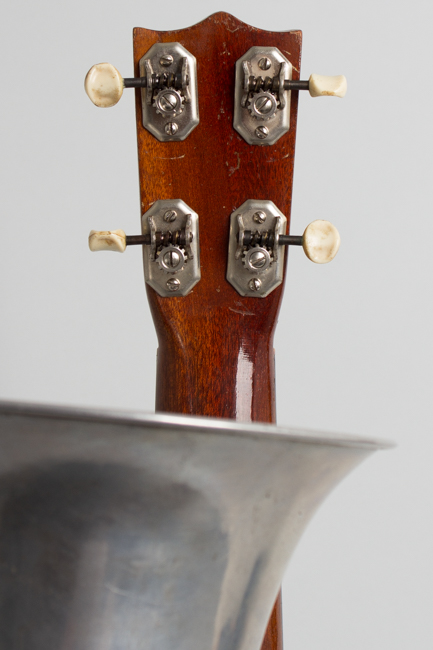 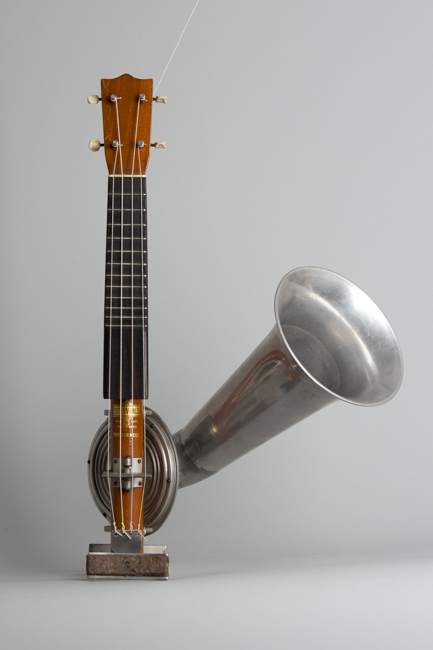 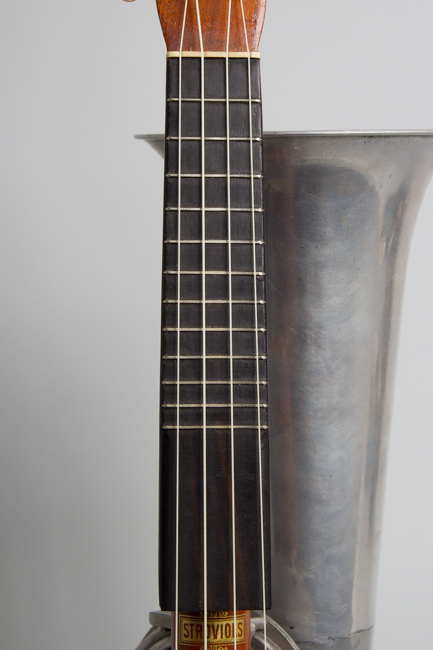 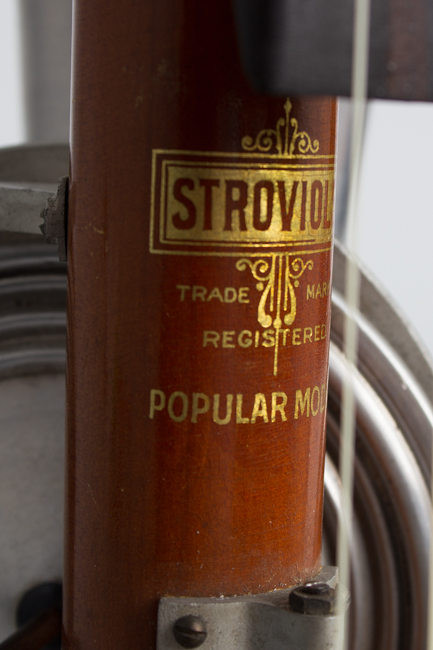 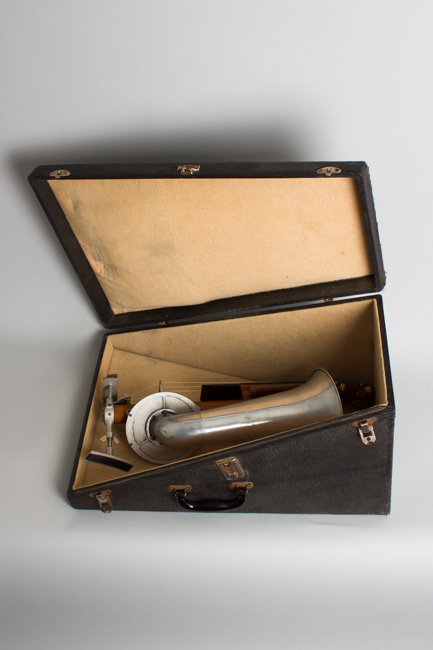 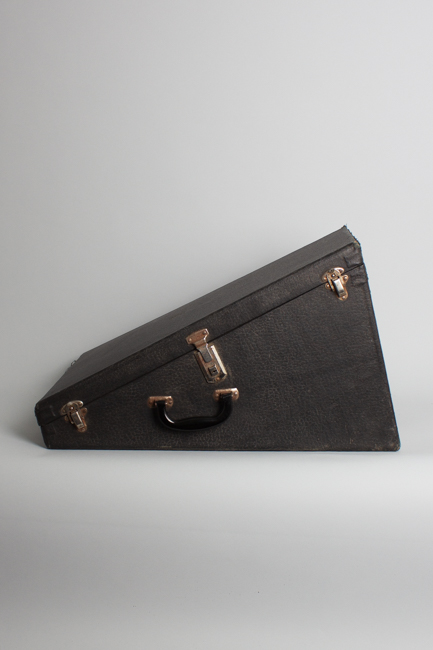 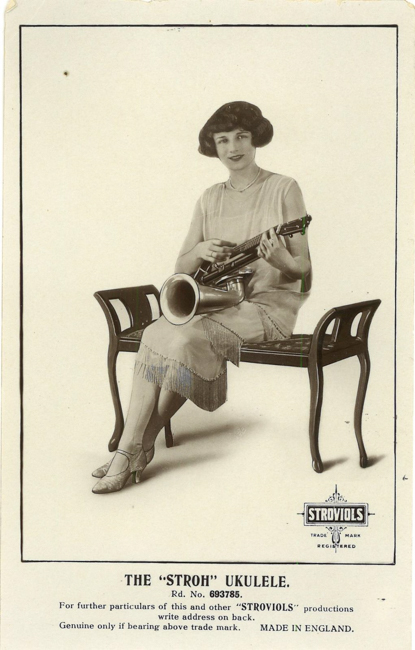 We have handled many rare and sometimes odd or unique instruments here over the past couple of decades, but this qualifies as one of the most interesting on all counts. It is an exceptionally rare Stroviols Ukulele, one of the most famous oddities created by a company famous for their bowed resonator instruments with Phonograph-like acoustic horns. In the 1910s Hawaiian music was an enormous fad, even in England where Stroh was based. Perhaps sensing saturation of the market for their violins, in the early 1920s Stroh added mandolins, Spanish and Hawaiian guitars and perhaps most improbably this ukulele to his line. These fretted Stroviols are so rare as to be almost non-existent today.

All Stroviols instruments are fascinating, both on their own merits and as precursors of the 1920s National resonator designs. John Matthias Augustus Stroh, an engineer in London, was the designer using the trade name "Stroviols". These initially included violin, viola, cello, bass and novelty one-string phonofiddles. The design was initially submitted for patent protection on May 4th 1899. UK patent GB9418 for "Improvements in Violins and other Stringed Instruments" was granted on March 24th, 1900. It described the use of a flat metal (or other material) diaphragm in a violin to mechanically amplify the sound.

On February 16th, 1901 Stroh applied for an additional UK patent (GB3393) "Improvements in the Diaphragms of Phonographs, Musical Instruments, and Analogous Sound-producing, Recording and Transmitting Contrivances" which was granted on December 14th, 1901. This featured a conical resonator with corrugations at its edge, allowing a more rigid diaphragm. Stroh did not patent his inventions in the USA which allowed John Dopyera and Geo Beauchamp to later obtain US patents for the somewhat derivative Tricone and single cone National and Dobro resonators. Stroviols violins were reasonably successful for a couple of decades, especially in the era of acoustical recording, while never replacing traditional wooden instruments.

This Stroviols ukulele is one of the true holy grails of uke collecting; only a very few are known to exist. It is certainly the ultimate "Steampunk" ukulele and a conversation piece par excellence! Essentially this is a Stroviol violin with a wider fretted neck and uke-style headstock. The bridge is all-metal instead of a wooden violin piece, and there is a clever system of an adjustable body rest and padded armrest attached to the tubular body for holding it in playing position. The horn and resonating diaphragm are mounted below the body canted at a 45 degree angle to the axis of the strings.

The sound is completely unique; quite loud even with Ukulele strings and exceptionally directional. It projects very well, at least if the horn is pointed at the listener which after all was the original intention. it is not the most convenient instrument to hold in the traditional uke playing stance but one can get used to it after a bit of practice. The Stroviols catalog depicts a seated playing position, and makes many elaborate claims for the instrument. "The ukulele with a difference" they called it, and they were not kidding!

This exceptionally rare 100-year old instrument is relatively clean overall, with only some light play wear (somehow not too surprising!) but one notable alteration. Someone added Kluson openback guitar tuners in the 1940s, replacing whatever was there originally. Uke-style tuners could be substituted, but some minor scarring would remain on the back of the headstock. Other than that the instrument remains as built, the finish showing some minor dings and scratches with some small dings and dents to the lower side of the horn. Some of the plating on the lower body rest is worn away.

This is a playable piece; the action is fine in the first five or so frets but gets rather high further on up the neck. The original frets are large and a bit klunky; Stroviols was a violin company after all so fretting was apparently new to them. With Nylgut strings it produces a surprisingly full sound, in its own way quite beautiful and closer in character to a wooden ukulele than one might expect. This is the only example of this instrument we have ever seen, and no more than an handful are known to exist. It is provided with an odd trapezoidal hard case that appears to have been made around the same time as the tuner swap, probably the late 1940s. Overall Excellent - Condition.
×