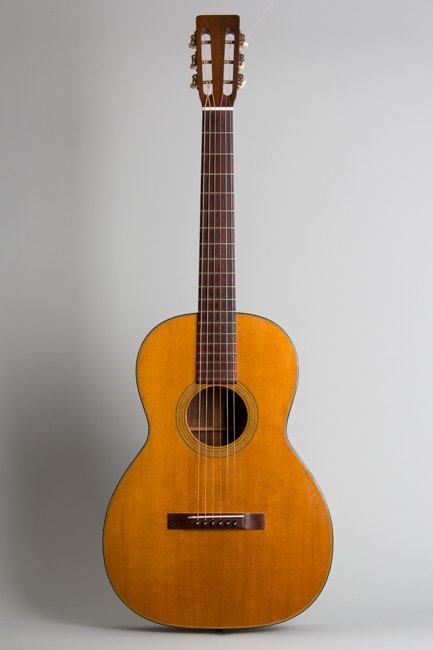 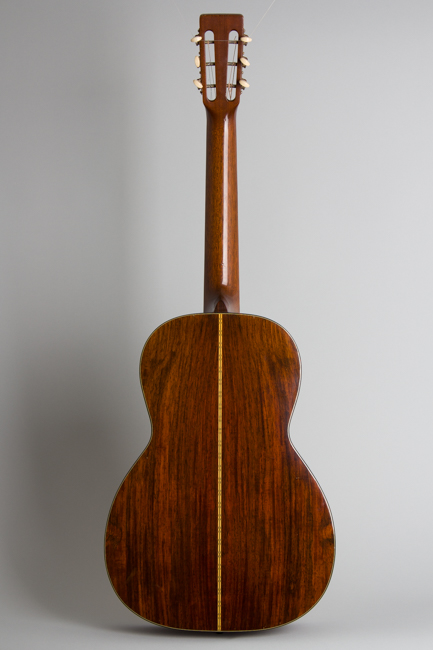 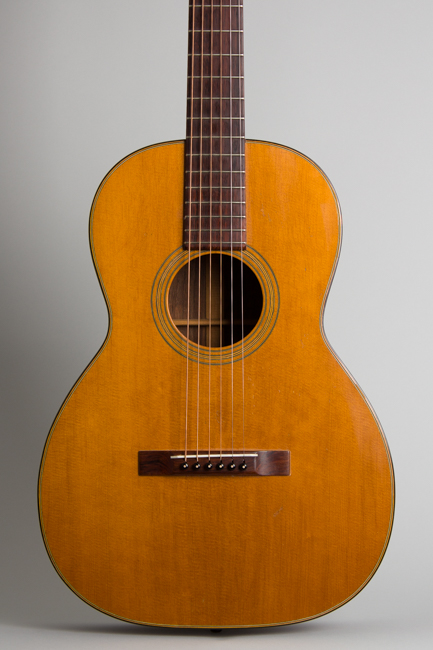 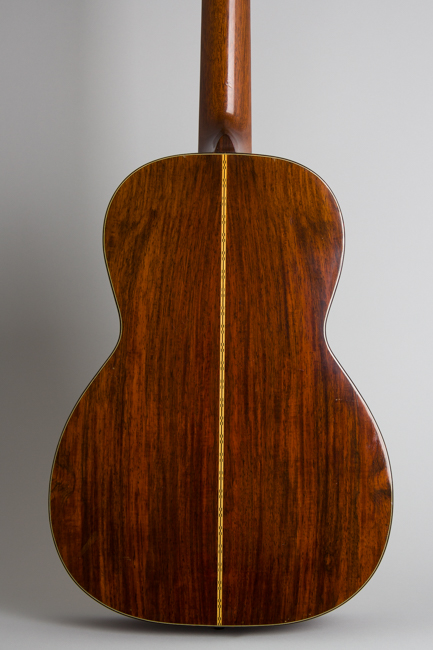 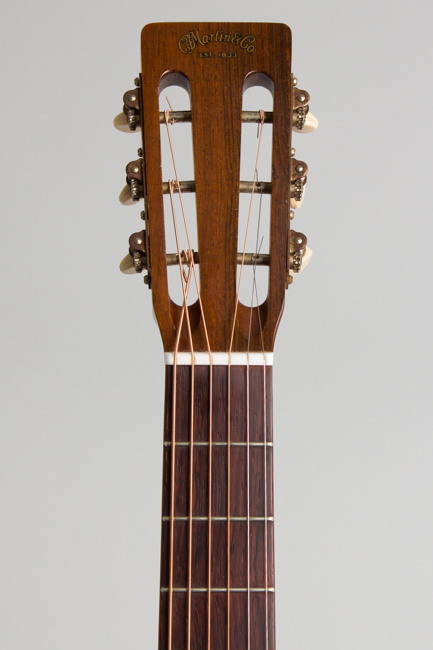 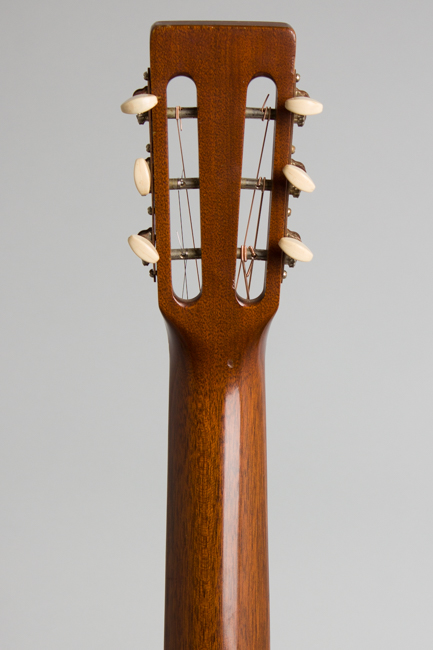 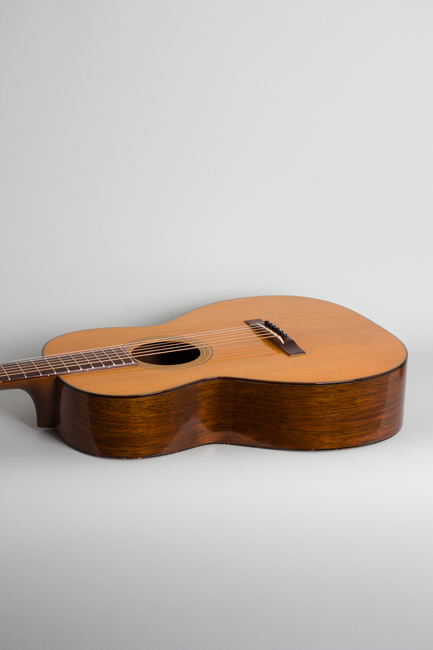 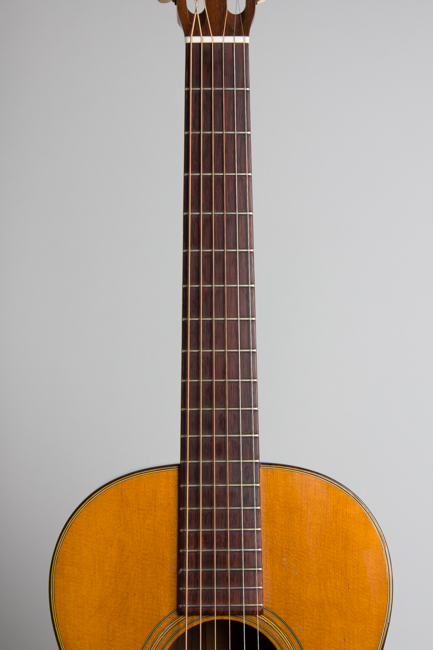 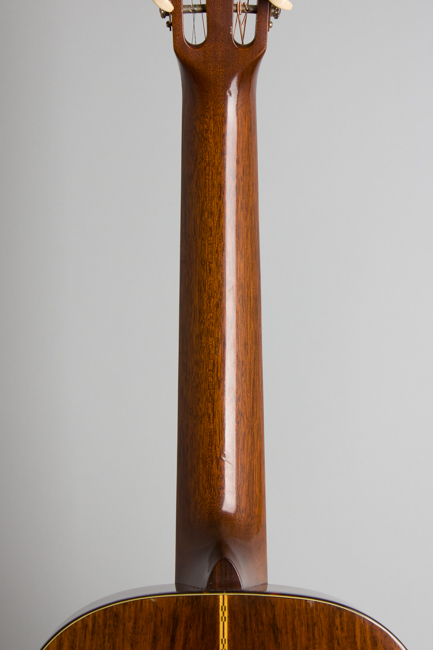 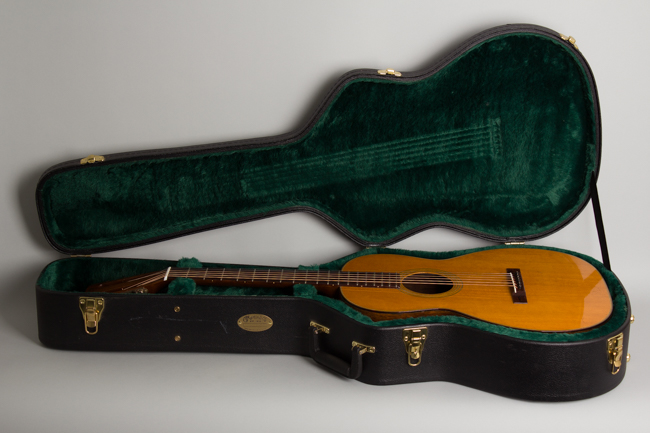 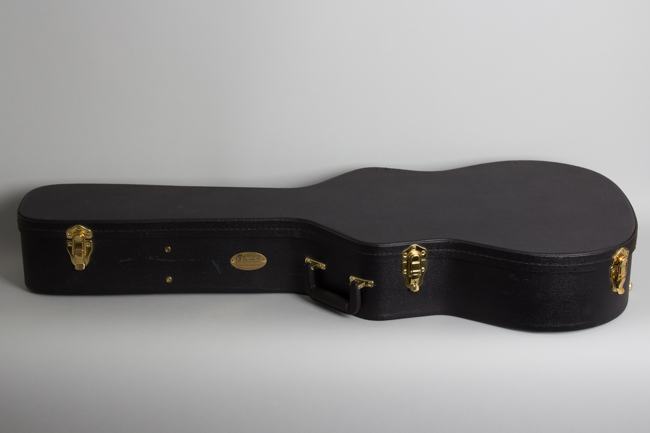 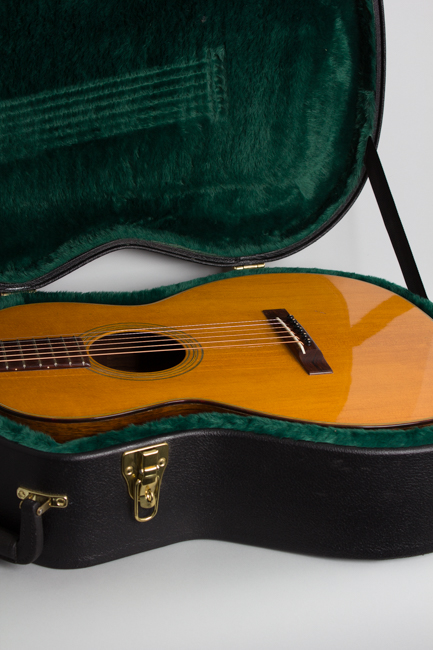 This beautiful 00-21NY is one of the earliest "vintage" re-issues, as close as the 1960s Martin company got to making a 1920s-style guitar. Starting in the late '50s "folk boom" aesthetics made old-style 12-fret Martins fashionable among discerning traditional-minded players, and due to this demand several "New York" models were added to the line in 1962. These were named to honor both the Martin company's original roots in that city and the strength and influence of the contemporary Greenwich Village folk scene. With lighter bracing, no pickguard and an older style 12-fret neck with wide fingerboard, no markers and a slotted headstock these were nearly identical in look and feel to their 1920's ancestors.

This example was built in late 1964, one of 275 made that year. The guitar itself has spectacularly grained Brazilian rosewood back and sides (often seen on older Style 21's) and a lovely tight grained spruce top. The only real differences from a 1920's guitar are the "modern" 1960 Waverly strip tuners, headstock decal, slightly different bracing and the tang frets instead of '20's style bar fretwire.

These models were originally sold as suitable for nylon or steel strings; the construction is lighter than most '60's Martins but still stout enough that the guitar performs excellently with light gauge steels. This is simply a superb playing and sounding guitar, one of the coolest 1960's Martins we have seen in a while, not a flashy piece but in its understated elegance a splendid traditionally-styled instrument.

This is a nicely preserved guitar for the most part, showing some general wear but in excellent playing condition. The finish overall shows checking and some minor dings, scrapes and press marks. There are a few barely feelable marks on the back of the neck, one by the headstock and a small set around the tenth fret. There are a couple of small areas of finish loss on the top, one under the strings between the bridge and the soundhole and another off the treble wing of the bridge. Both have been lightly touched up.

There is a rosewood grain check on the lower bout curve of the upper side that is visible but has never opened up into a crack. The rosewood bridge has likely been reglued, there is finish disturbance around the perimeter but it is original and unaltered, never cut down as so many were. The neck looks to have been cleanly reset. The frets are original and show some light wear in the lower positions. Resting in a modern hardshell case, this is a very fine playing and sounding guitar, a nearly 60 year old Martin that in both feel and sound is surprisingly close to its 1920s forbearers. Excellent Condition.
×