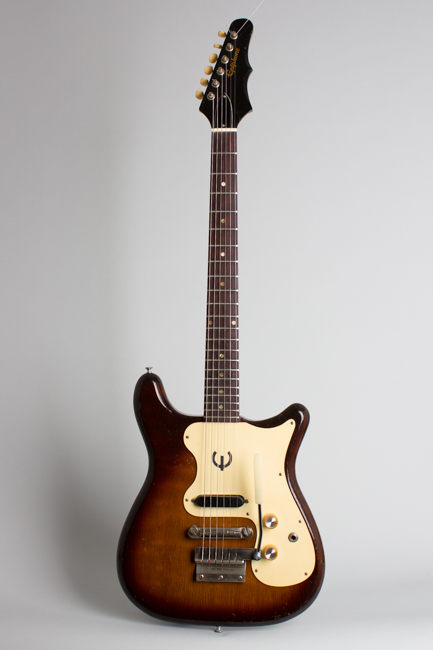 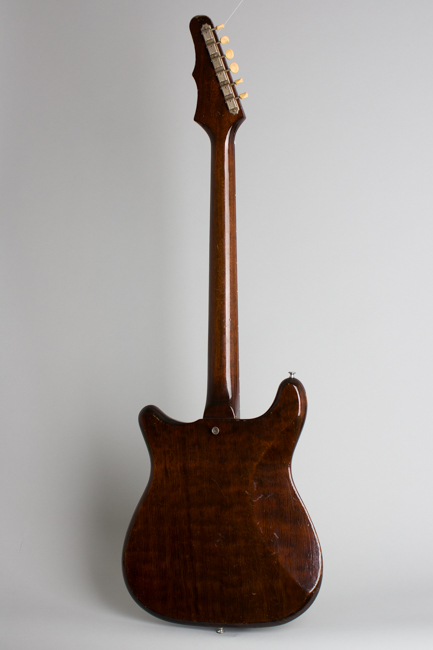 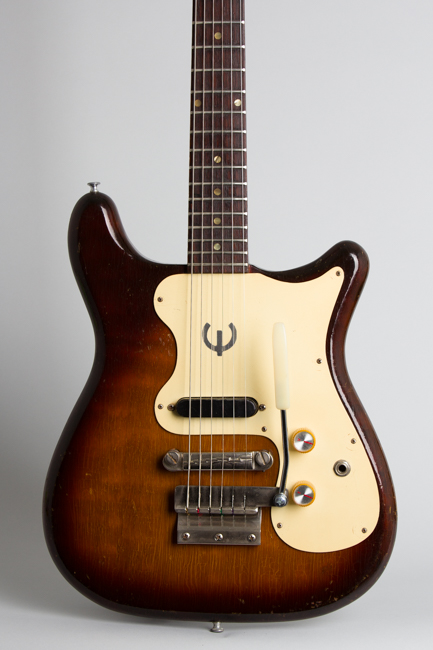 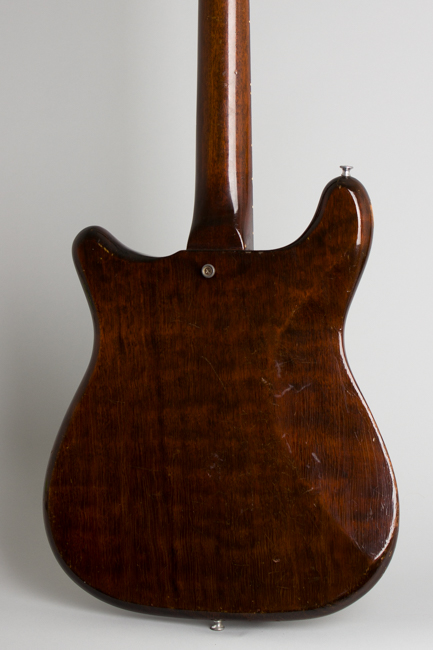 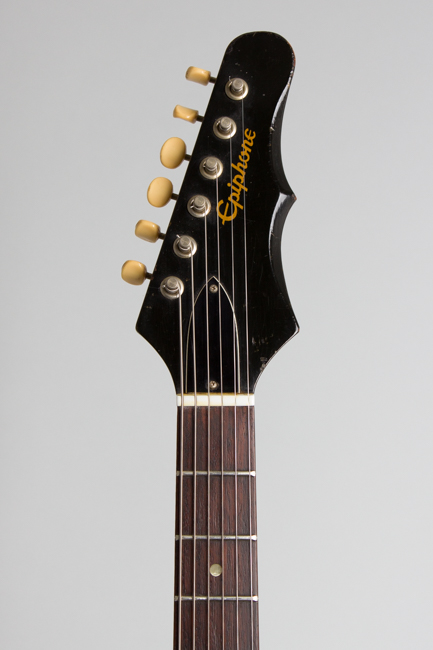 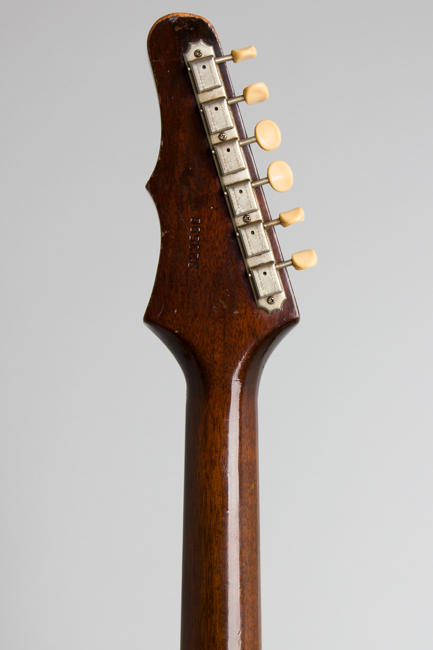 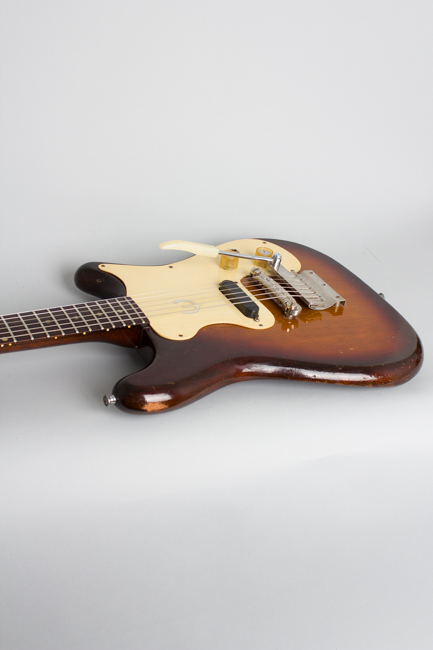 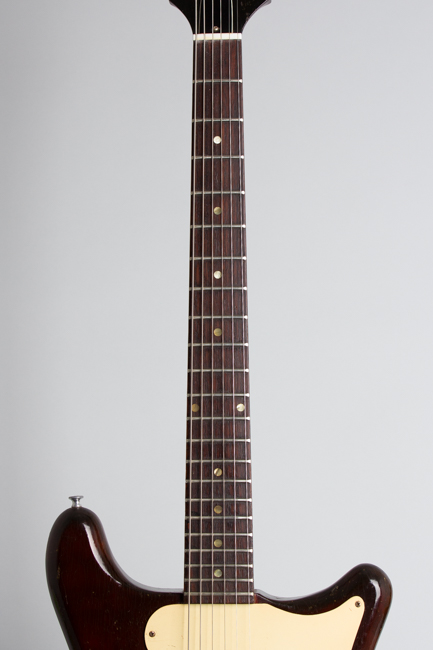 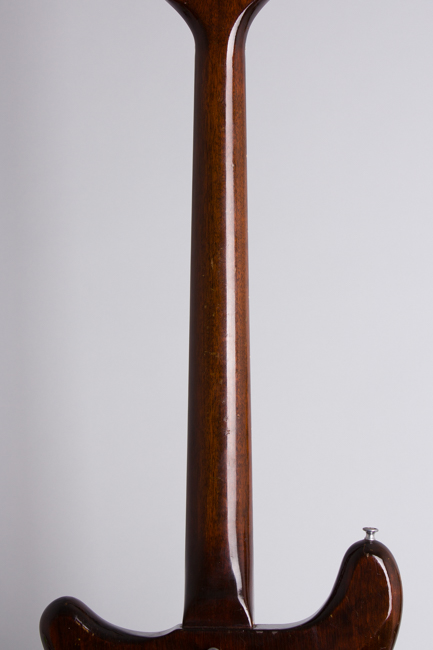 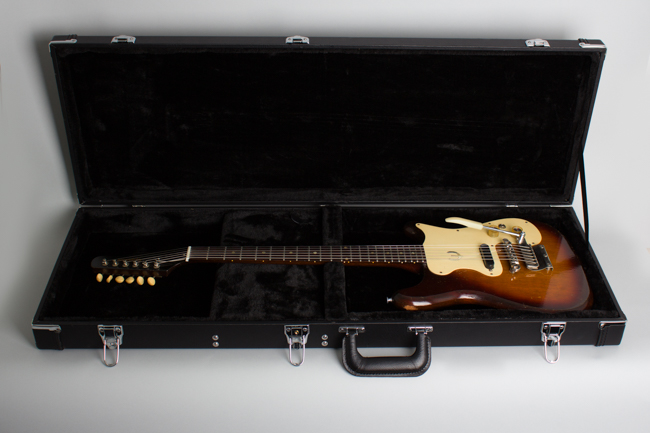 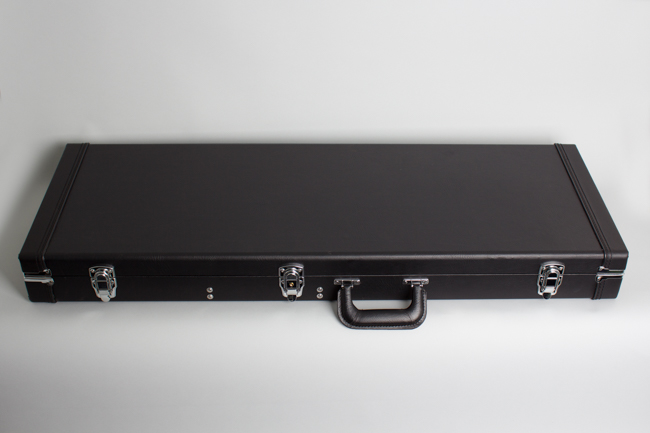 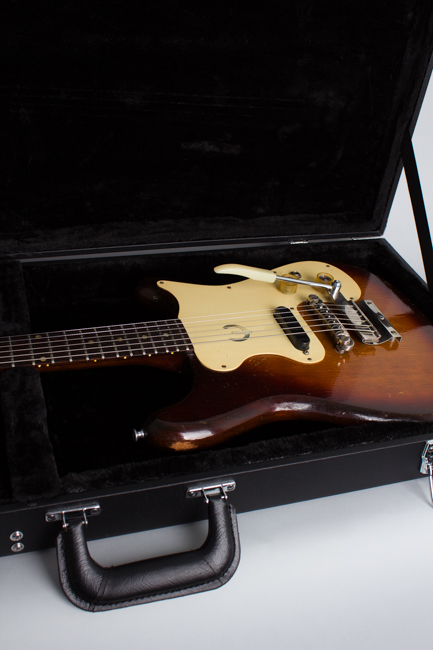 The Olympic is the Epiphone equivalent to Gibson's Melody Maker, a budget-oriented but highly playable member of the Kalamazoo-made Epi fold. With physical and sonic characteristics slightly more Fender-like than most Gibson guitars the Olympic is a very comfortable, easy handling and surprisingly good sounding little guitar. This second-generation example features a fairly subdued finish on an asymmetrical mahogany body, a long slim neck with a Fender-line headstock and one single-coil Melody Maker pickup under a plastic cover at the bridge. This example has an especially good neck angle so the vibrato tailpiece is actually quite functional.

This guitar dates to early/mid 1965; the pots are coded to the 9th week of that year. The hardware is still nickel plated, the Kluson Deluxe tuners on the single-sided headstock are integral strip with plastic buttons. The neck is slimmer at the nut than earlier models but still has a solid feel. These asymmetrical-bodied Epiphone solids were phased in in late 1963, replacing earlier symmetrical models. The Olympic shared the same body and neck with the higher end models after that point, using a top-mounted pickguard holding all the electrics to reduce the cost by limiting the routing required to one side and speeding assembly.

1556 of this basic Epiphone model are recorded as having been shipped in 1965, the peak guitar boom year. The flashier cherry version seems to be more common than this sunburst sibling. This was the Olyimpic's best showing, but still a small number compared to the nearly 7,000 single pickup Melody Makers the Kalamazoo factory sent out the same year. While appointments are basic this is a neat and very functional 1960's Epiphone solidbody, cool looking, great playing as Gibson student instruments were designed to be and offering a surprisingly full tone from the combo of the Melody Maker pickup and light mahogany body.

Overall length is 38 3/4 in. (98.4 cm.), 13 in. (33 cm.) wide at lower bout, and 1 3/8 in. (3.5 cm.) in depth at side. Scale length is 24 3/4 in. (629 mm.). Width of nut is 1 9/16 in. (40 mm.).
This is a slightly worn-in but still very nice playing example of this rather unsung Epiphone rarity, used but not abused and dialed in for maximum fun. The finish shows fairly heavy checking with a collection of dings, dents and scrapes rather randomly distributed but heaviest on the back. There are no large areas worn away; the back of the neck is fairly clean with some small feelable dings and the top headstock edge is worn down.

The neck joint is very solid. With a fine angle that makes the vibrato more usable than most. There are no cracks or breaks on the instrument. The guitar remains original except for a later nut and repro Vibrola arm and screw. The original large frets have been crowned a bit. This is still an affordable and quite friendly vintage 1960s American guitar, light, handy fun to play and housed in a modern HSC. Very Good + Condition.
×