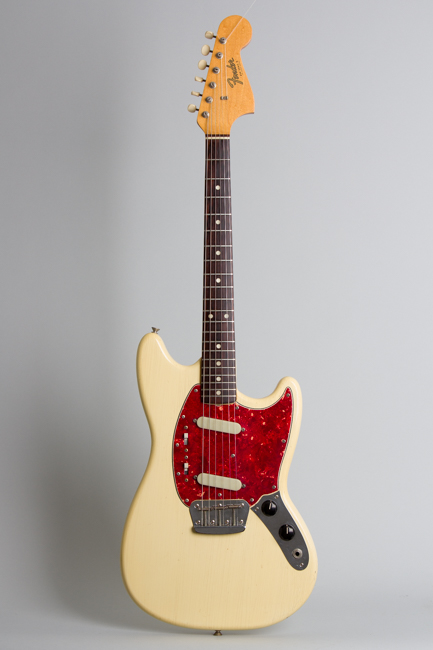 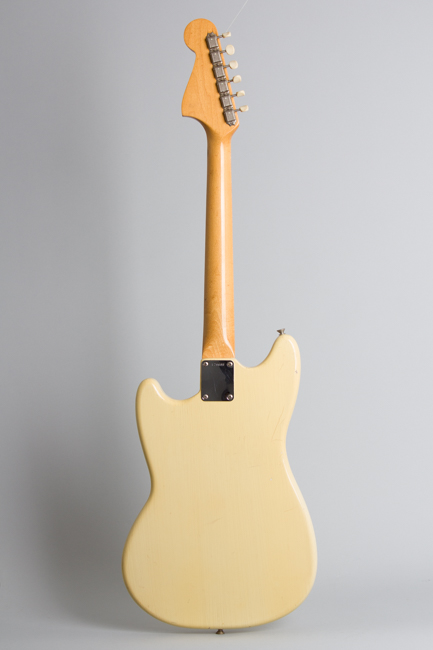 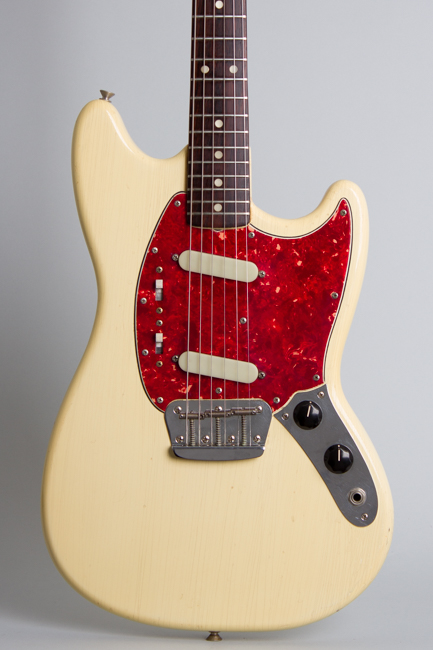 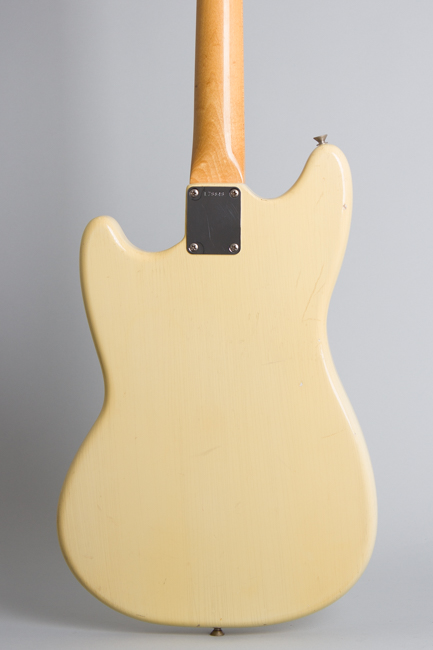 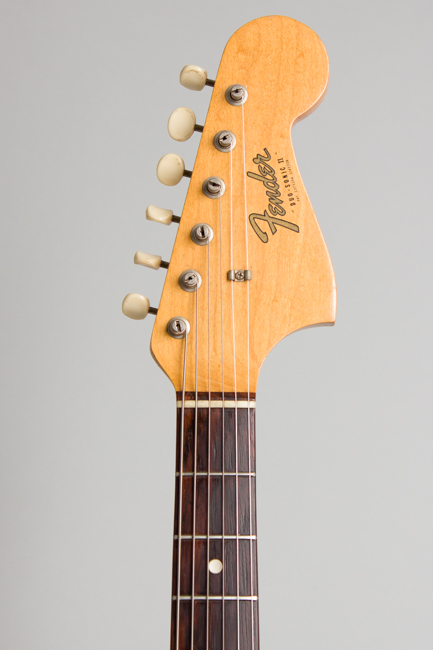 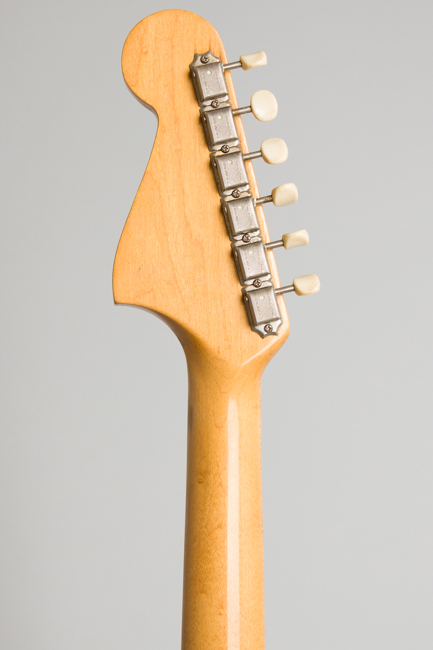 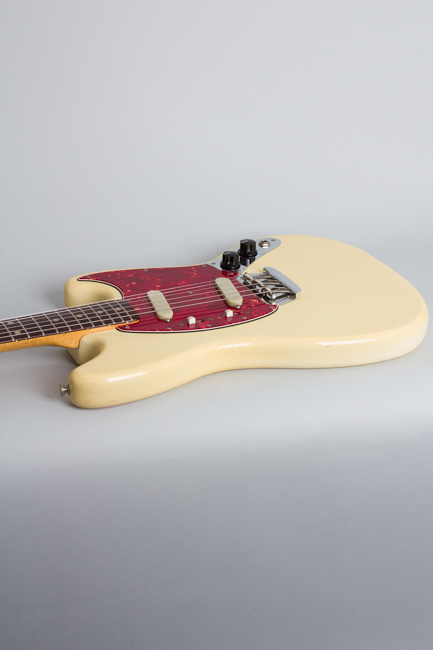 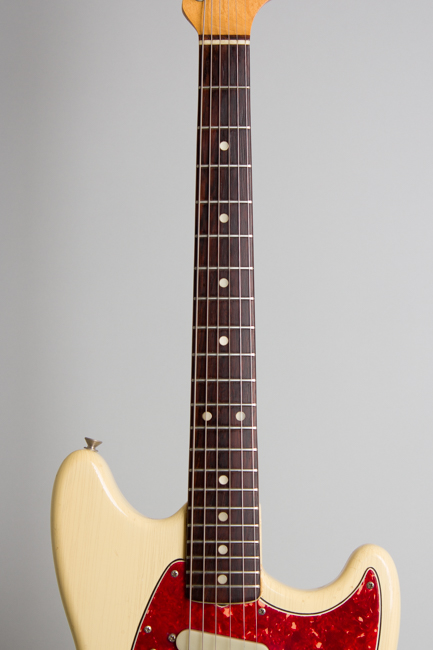 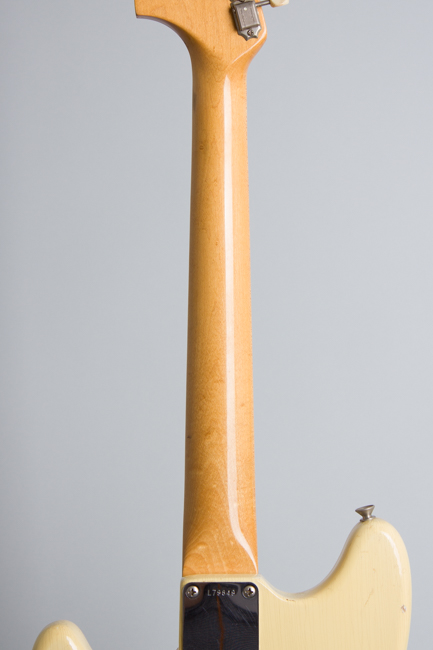 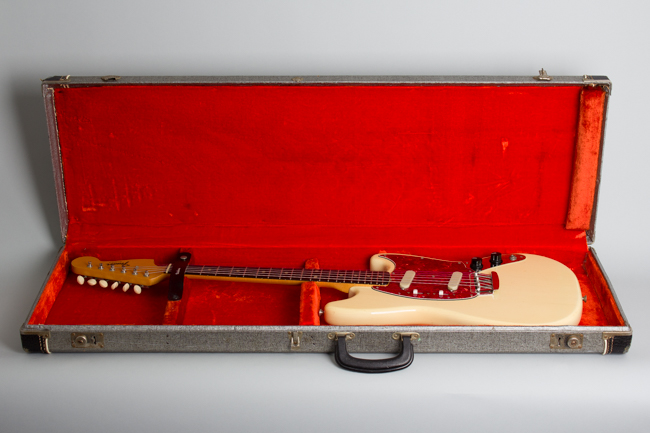 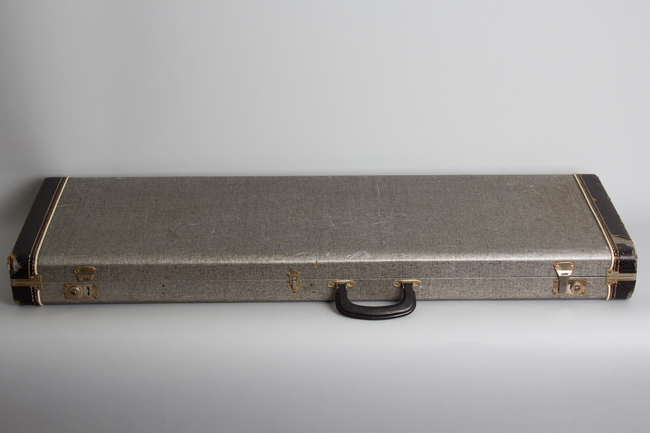 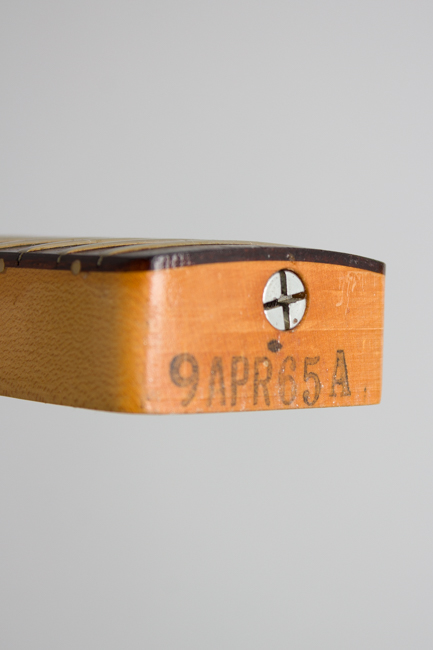 This Fender Duo-Sonic II was assembled shortly after the CBS takeover of Fender and less than a year after the model was redesigned with components interchangeable with the new Mustang. THAT guitar took off to become one of the most popular electrics of the 1960's, possibly the most successful student solidbody ever made. By contrast the Duo-Sonic seemed to fade away, even though it was at that point exactly the same instrument, just without a vibrato. It just goes to show how much a snazzy name and a whammy bar mattered to "the kids" in the mid-60's!

This beautiful white-finished 1965 example is trimmed with a tortoise celluloid pickguard and white pickup covers and switches. This was one of three spiffy color schemes offered, a patriotic red, white or blue! The neck has the shorter 22 1/2" of two scale lengths the model was available with; this is what the Duo-sonic started out with in 1957 but many later models used the 24" scale. While small-feeling for some players with larger hands this does make for an exceptionally handy guitar! The switches for the two pickups offer interesting in/out of phase sonic options; the rig is identical to the Mustang. This guitar's neck is dated to April 1965, just about four months into the CBS era. The pots are marked to the 12th week of that year.

Something of a forgotten model in the guitar-boom mid-'60's, the Duo-Sonic was Fender's "mid-line" student model but eclipsed by the trem-equipped Mustang which dramatically outsold it. With its string-through three-saddle bridge the Duo-Sonic II is a more solid-feeling instrument than the Mustang it shares all features with except the floating tremolo. It is often found to hold tuning more steadfastly, especially under a hard strummer's attack. Overall this is a very nicely preserved JUST-CBS Duo-Sonic and a fine-playing, light, and super handy little guitar.

This is a superb Duo-Sonic overall, showing just some minor wear and remaining all original and unaltered. The body shows some noticeable longitudinal checking and a few small dings, dents and scuffing but really not a lot of wear. The white color has yellowed a bit but not as heavily as many other period Fenders. The back of the neck has very little wear, just a touch around the first position. The original frets show some light wear in the lower positions but are still quite playable, the rosewood fingerboard is clean as well. This is a fine sounding and playing Duo-Sonic, a guitar one writer once described as "the .22 Magnum Derringer of the Fender line". It remains pretty much as it was played in the 1960's, complete in the original HSC which shows some external wear and a broken upper latch. Excellent Condition.
×