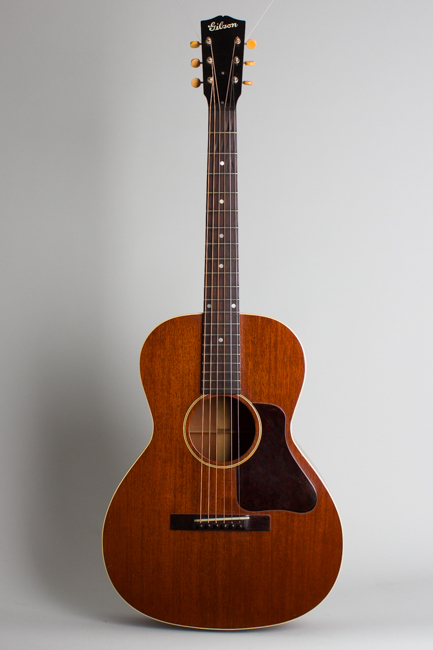 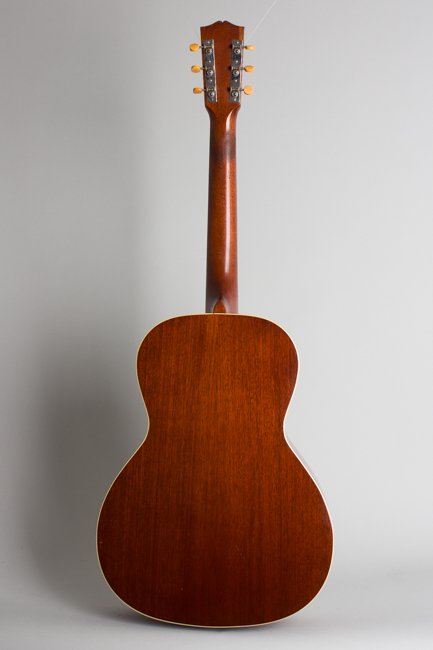 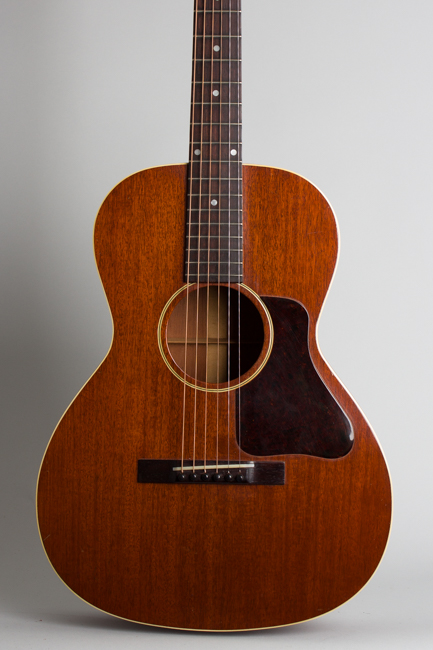 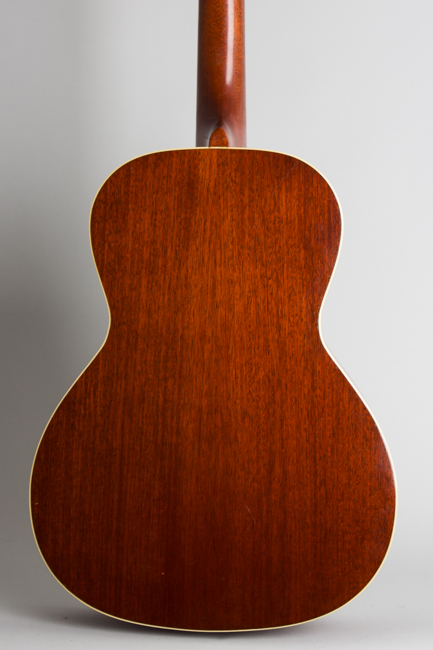 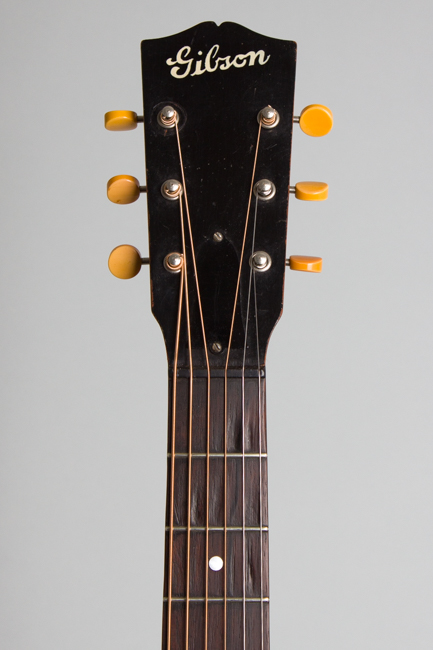 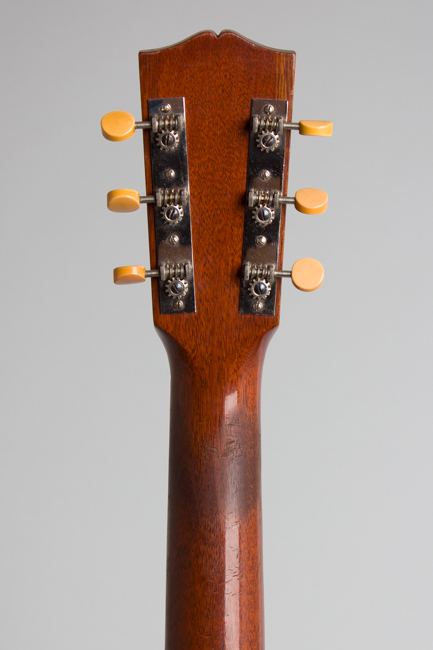 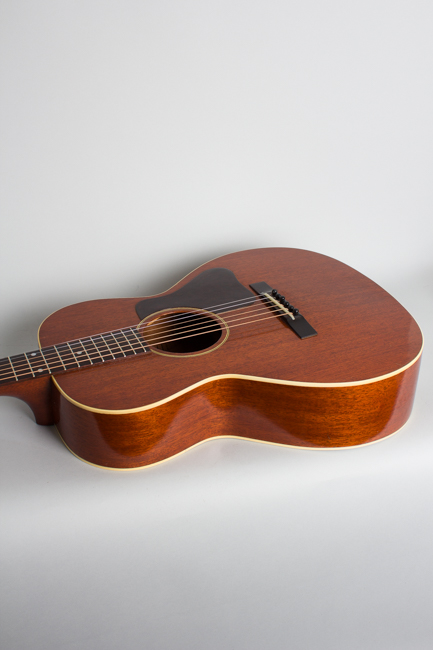 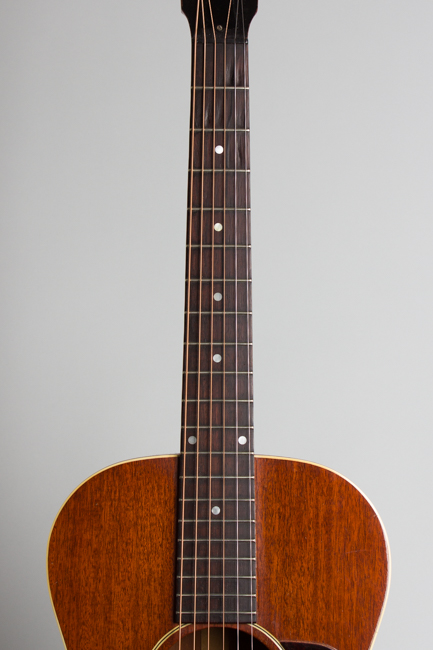 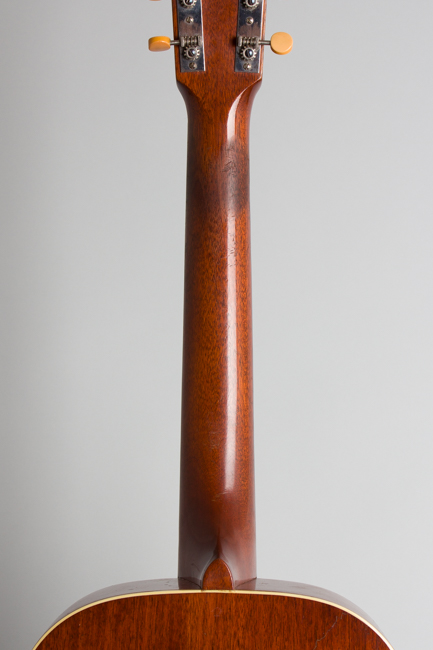 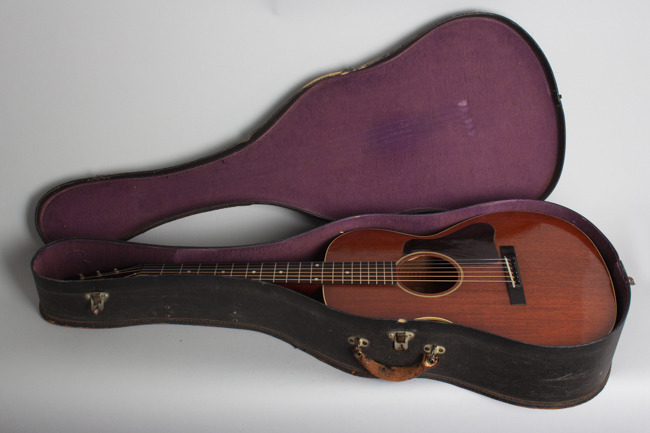 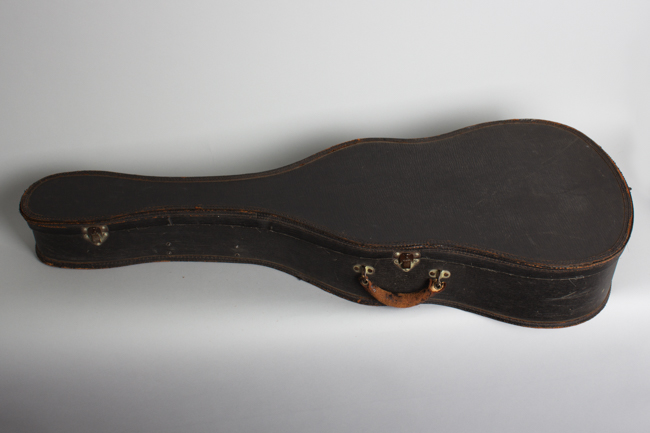 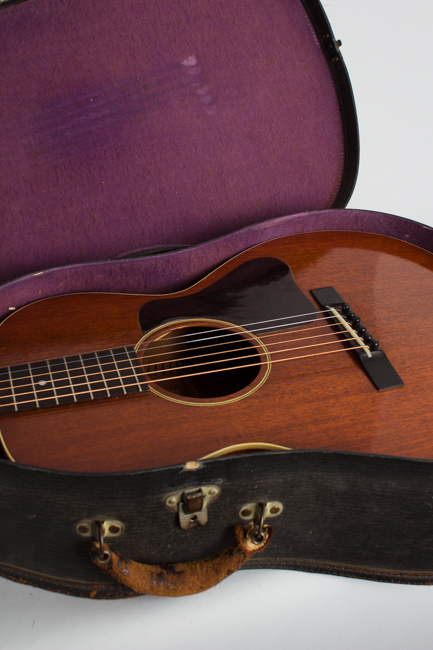 This is a superbly well-preserved example of a rare and wonderful Gibson flat-top produced only for a brief period in 1932. This all-mahogany, X-braced transitional L-0 combines features from earlier and later eras into a unique package. The most notable difference from later 1930s models is a 12-fret neck joint. In 1932 both Gibson and Martin were adopting the 14-fret design as standard for non-Hawaiian flat tops; this L-0 would be one of the last original pre-war 12-frets built in Kalamazoo, excluding dedicated Hawaiian guitars. The L-0 designation was discontinued for a time soon after this one was made in 1932, as the whole flat top line went to 14-fret bodies.

This L-0 is built on the "modern" post-1929 larger Gibson flat top body, built entirely of mahogany with the then-brand new glued-on pickguard, a novel feature for the company at the time. This body shape and the X-braced top introduced on these models in 1929 would be subsequently used on the 14-fret L-0 and L-00 throughout the 1930s. This one is finished in clear natural dark mahogany with white celluloid accents, with the brand-new-in-1932 larger script "Gibson" logo on the headstock. This neck has a very comfortable and surprisingly rounded deep "C" profile, quite unlike the heavy "V" adopted for these models soon after.

These early 12-fret L-0s feature exceptionally light construction, even compared to later 1930s examples. This final 1932 L-0 is just a shade more stoutly built than its 1930 forbearers, and none the worse for it. While we are partial to all pre-WWII Gibson flat-tops, we find the original 12-fret L-0 to nearly always be a fabulous-sounding guitar, and this one is no exception offering surprising depth, warmth and volume even with a mahogany top. This is an exceptionally responsive instrument, a true if little known gem in the Gibson flat top pantheon.

This all-original L-0 is not absolutely pristine, but is easily one of the cleanest and best preserved of these early Gibson flat top guitars we have seen. These all-mahogany instruments are *very* lightly built and almost never survive in this kind of condition-most survivors are found heavily worn and/or much repaired. This guitar has never had even a single wood crack, which is somewhat miraculous. The top seam has been tightly resealed, and the neck very neatly reset. The original bridge is intact; it may have been lowered very slightly off the front and the bone saddle is newer. The original tuners look shiny new, and the original unslotted bridge pins and endpin are still intact; one of the pins has a chip off the top.

Overall the finish has some small dings and dents, mostly on the back. The back of the neck shows the most wear, with a spot of finish worn to the wood in the first position and some feelable dings down from the first fret area, with an additional oddly placed set of feelable hash marks behind the 8-9th fret. The first fret has some wear mostly under the B string, and the first position on the fingerboard shows some noticeable divoting. Whoever had this guitar long ago only played in the "Cowboy chord" position. This is an excellent playing instrument, with a huge sound for a small-body all mahogany guitar. It is still housed in the original heavy-duty chipboard case; the latches are not reliable and a new HSC can be provided as well if desired. Excellent Condition.
×