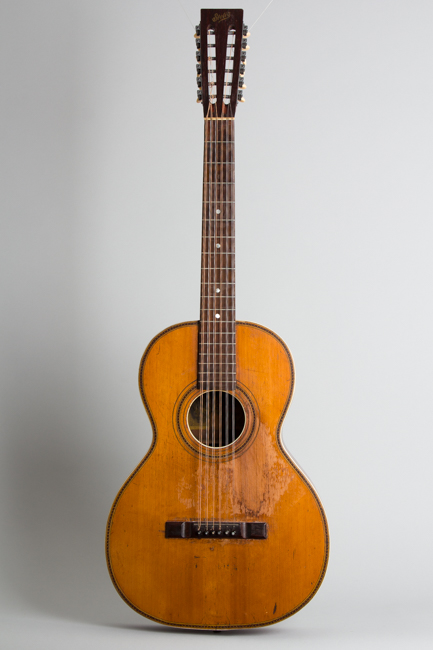 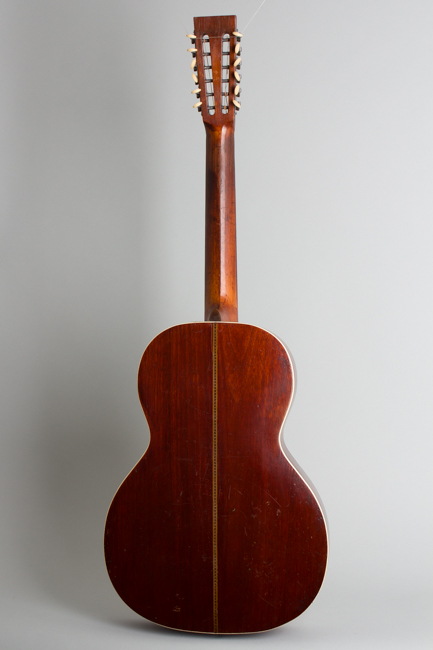 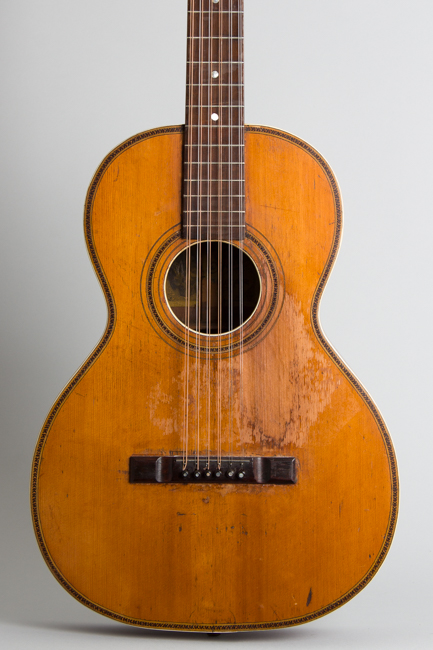 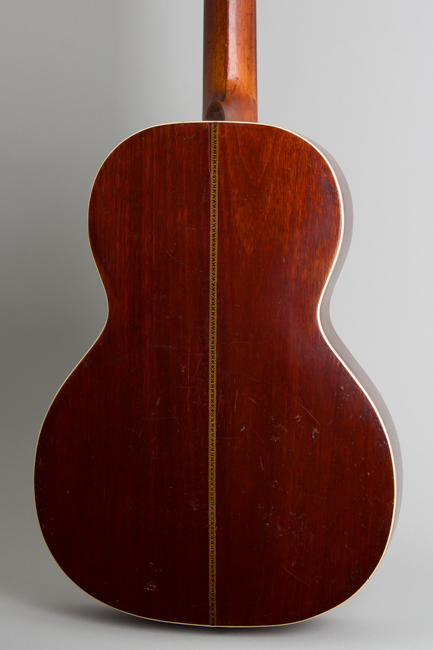 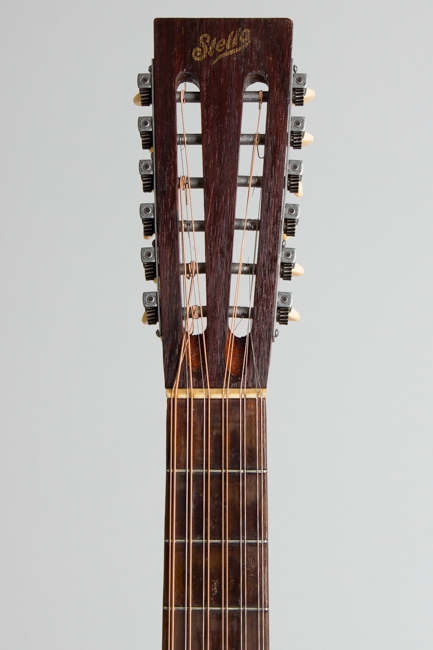 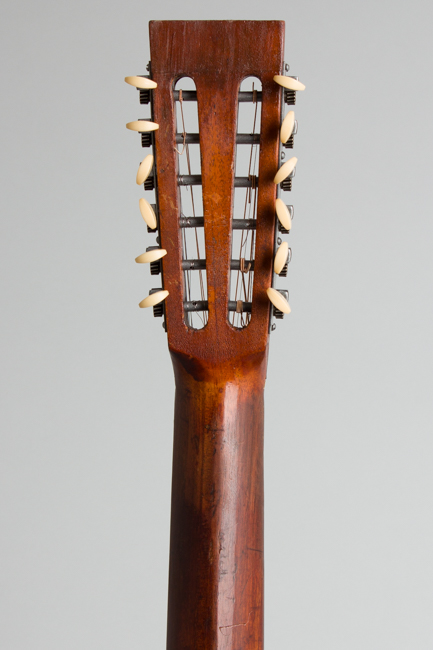 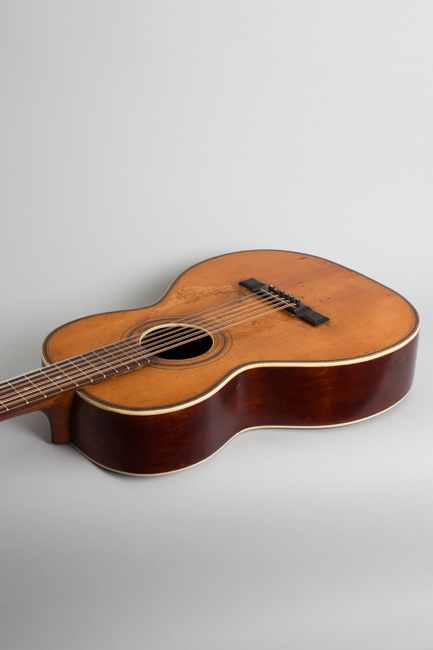 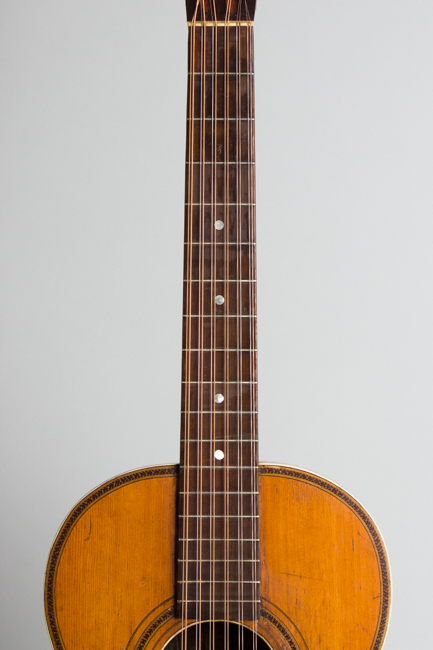 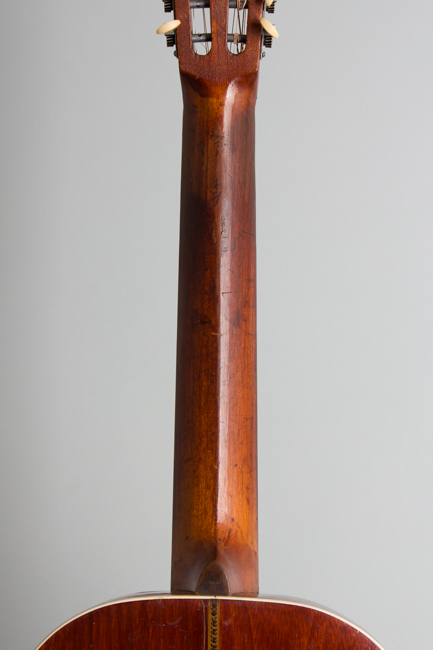 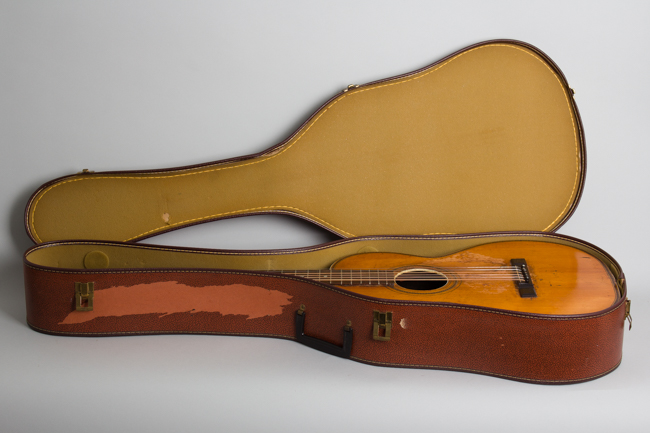 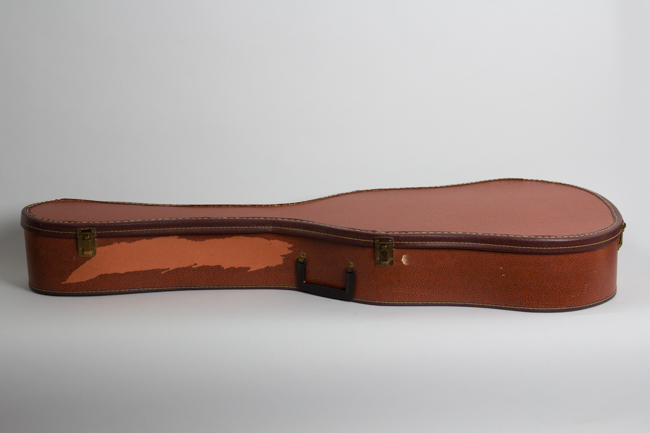 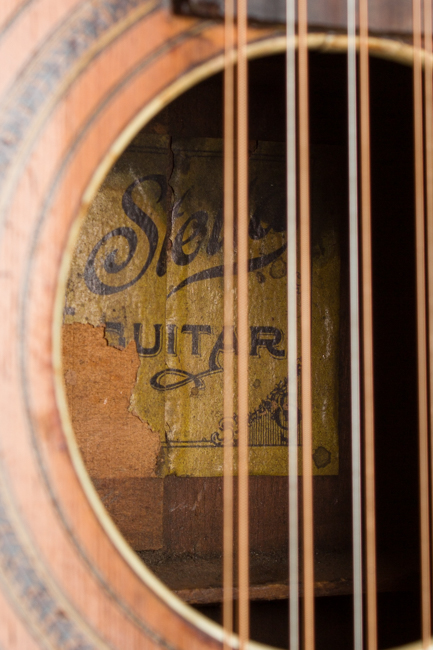 This is a very worn-in and super vibey Oscar Schmidt-made Stella 12-string guitar, generally considered a "holy grail" instrument for pre-war blues fans. It is yet another example of the endlessly varied pre-war instruments marked with this iconic blues-approved brand. It has been well used and much repaired over close to 100 years but remains a fully playable icon and a direct link to the pre-WWII blues tradition. These inexpensive but solidly made Stella brand guitars were often the only decent instruments affordable to rural Americans of every stripe, especially in 12-string format. They offered great looks and sound for the money. When asked decades later what guitars the pre-war bluesman he championed played, early talent scout H.C. Speir responded "Stellas, they all played those old Stellas".

This is a mid-sized but higher grade Stella 12-string, with a 14 7/8 " wide body of solid mahogany and a spruce top. The size falls between the traditional "Grand Concert' and "Auditorium" designations, but Schmidt guitars have nearly endless variations. The original Stella ladder bracing remains intact (many of these guitars have been re-braced, which substantially changes the sound). The top and soundhole are bound and bordered with the wide colored wood purfling that is a Stella trademark, also used for the backstrip. The bridge has flat-ended pyramids on the ends and may not be original, although the 6-pin arrangement is common on these.

The neck is poplar with an "ebonized' fingerboard, inlaid with 4 pearl dots. It is a long 26 1/2" scale with a 2" wide nut. The neck itself has a deep "V" profile typical of these; this neck is slightly shallower with less of a sharp spine than some we have handled. The classic yellow Stella label under the soundhole is fairly well worn but authentic and is in the earlier 1920s style. It is not possible to date these instruments exactly but this is a pre-depression example, at least.

This guitar has a rich powerful resonance and a sound all its own, different from modern X-braced 12-string instruments. It offers a fantastic playing experience for anyone interested in country blues, East Coast blues, period Mexican music, finger-picked ragtime or similar genres. It is suited especially to the stylings of "Barbecue" Bob Hicks" (who played this type of mid-sized Stella extensively) and Blind Willie McTell, as well as Leadbelly, Lydia Mendoza, and a host of others. This is a heavily worn but excellent playing example, "Blues approved" for sure!

This old Stella 12 has had a VERY eventful life over the last 90+ years, it shows major wear with scars picked up along the way and has been worked on repeatedly for decades. It remains a fine playing example preserving as much original character as possible. There is a LOT of wear overall, but with these old Stellas the worn-in look is part of their charm; "Blues approved" as it were. The entire instrument is covered with dings, dents and scratches, with typical varnish micro-checking. The top has wear down through the finish into the wood below the strings, with related finish wear all around. Some sort of pickguard looks to have been added and later removed in this area. Really, there is finish wear just about everywhere but the bulk of the original varnish remains intact, with a number of worn-through and touched in spots.

There are a number of repairs. The curve of the lower side has a fairly major sealed crack through the waist, which is solid but visible and feelable; this looks to have been done decades ago. There is a short crack to the side just below the neck heel, probably related to a neck reset. Amazingly the top has no cracks except one just along the treble side of the fingerboard to the soundhole edge. The back a couple of old sealed grain splits, one off the centerline by the neck block and the other in the lower middle area.

Two areas show major restoration. The 6-hole pin bridge is a period pattern; it looks very old but is probably not original to this guitar. It has been on long enough that there were once bolts added through the wings, later removed and patched. A lot of scarring around the bridge points to multiple repairs in this area. The large top-spanning original bridgeplate has a thin cap added ling ago, with the old bolt holes still visible. There was also a tailpiece mounted long ago, though whether it was part of the original configuration we cannot say for sure.

There is also restoration to the upper tip of the headstock; the top section above the slots has been repaired and a veneer re-installed on the face. The tuners are recent repros in the correct style, marks from previous installations remain. Otherwise the neck, fingerboard, frets and nut all appear original. The board has some patching in the lower positions, and the nut some slot repair. The frets are the old style thin wire; if not original they were replaced long ago and show some subsequent wear and polish-out in the lower positions.

While the preceding catalog of repair may seem daunting, the good news is despite its somewhat scruffy appearance the guitar is in better than average structural and playing condition for a period 12-string. The neck has been reset, the angle is good and the action is low and comfortable. The top is flatter than many, with only some very minor dipping in front of the bridge. The original Stella ladder bracing is intact, it has not been re-braced as many were decades ago. Canted braces were added on either side of the soundhole helping keep that notable problem area from folding up, as these are wont to do. As noted the original bridgeplate has been lightly augmented in the distant past.

As many afficionados know, finding one of these original 12-strings in playable condition without major alterations is difficult. These instruments were meant top last a few years at most "in the field" not nearly 100, and authentic fully playable survivors are rare in any condition. This mid-sized spruce top, pin bridge model is an excellent player with a powerful ringing sound, not as massively deep as the larger jumbo "Leadbelly' style but equally blues-approved. The instrument is tuned to a C#, down 1 1/2 steps from concert pitch and seems happiest there or in D. This is the real deal for pre-war blues fans, a much sought after piece. Overall Very Good Condition.
×