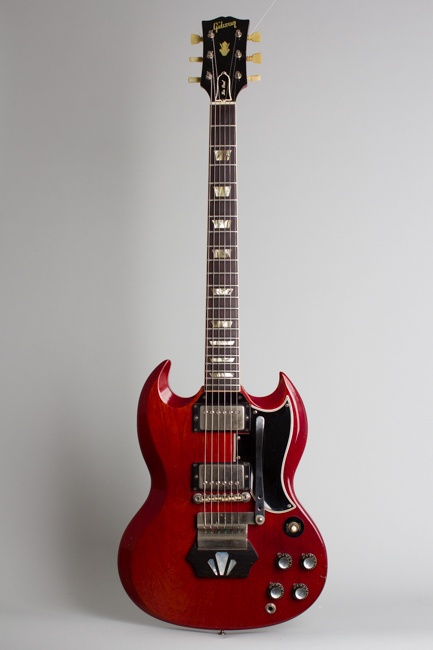 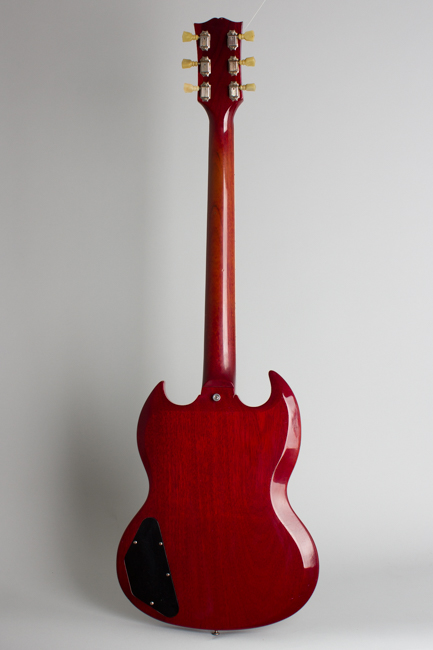 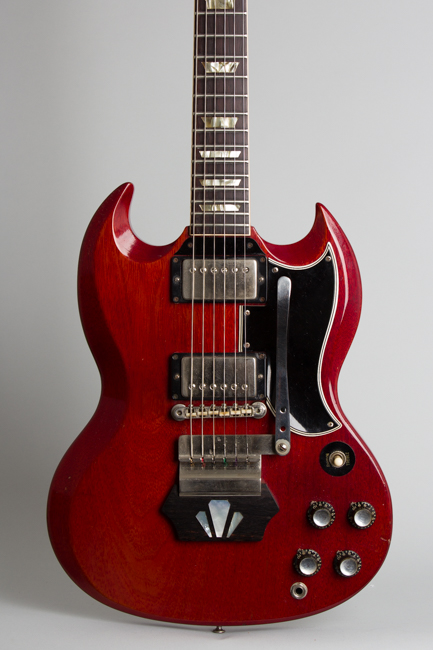 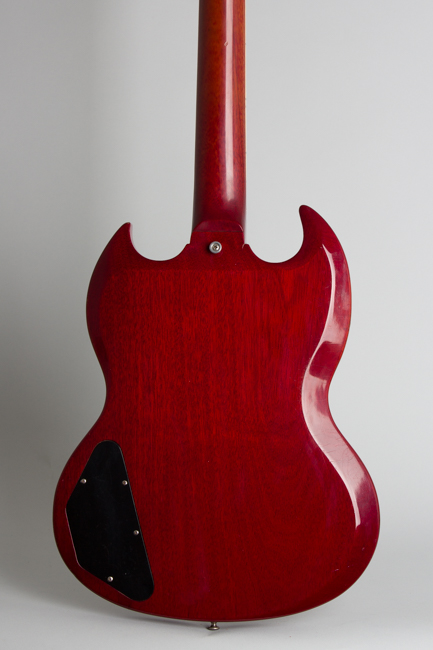 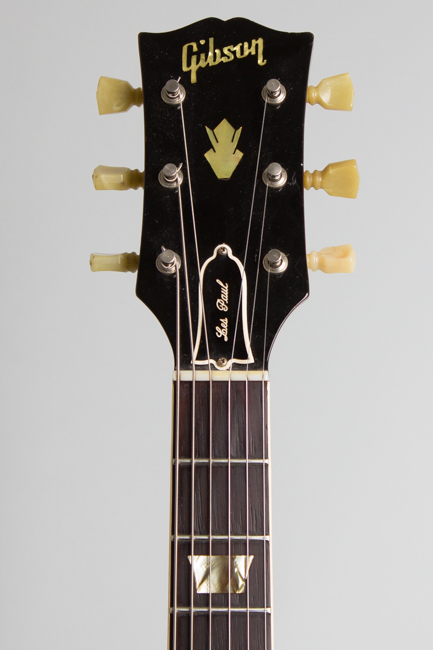 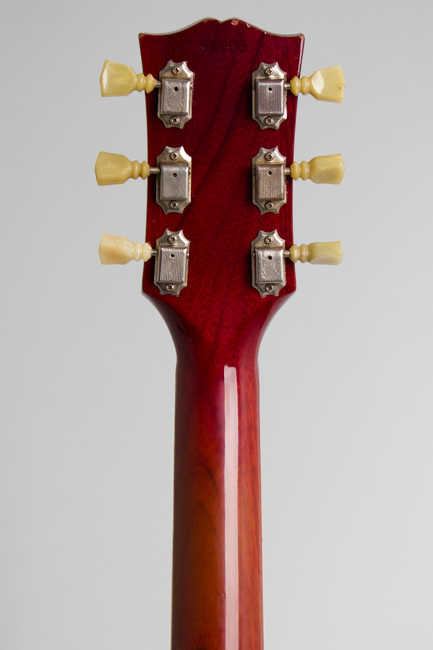 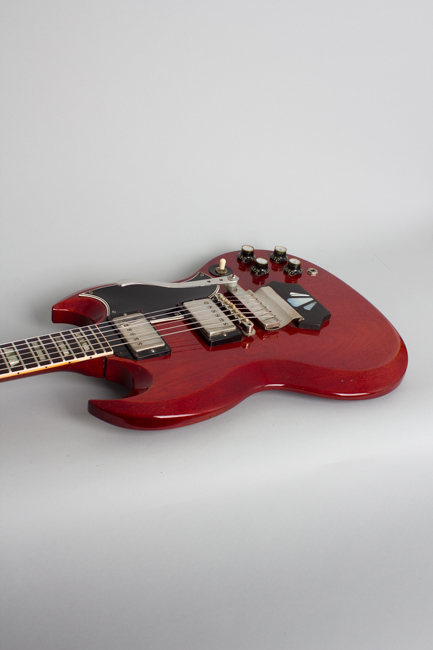 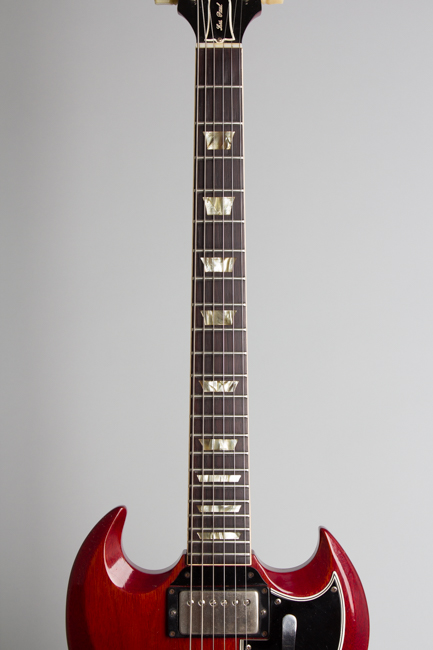 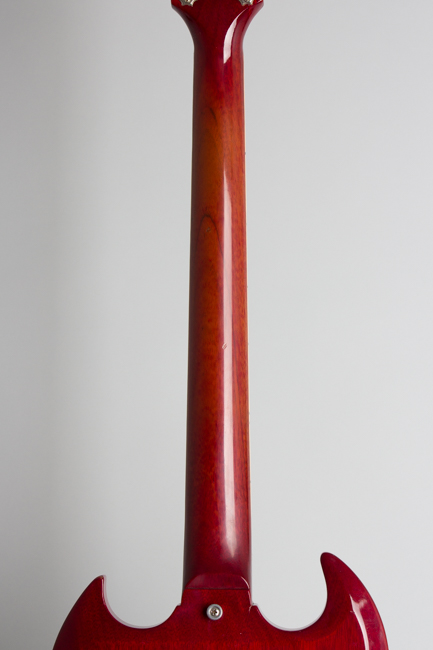 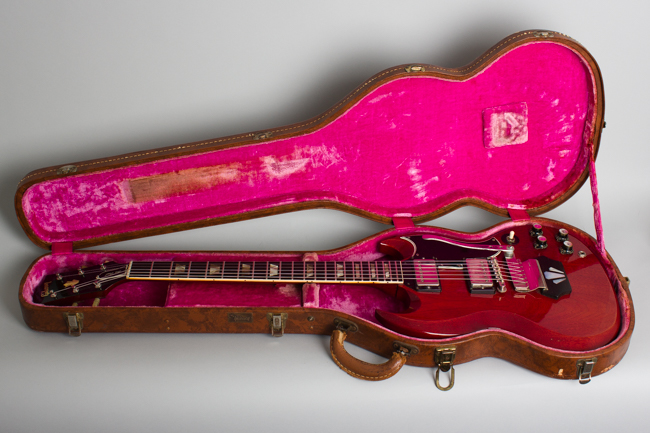 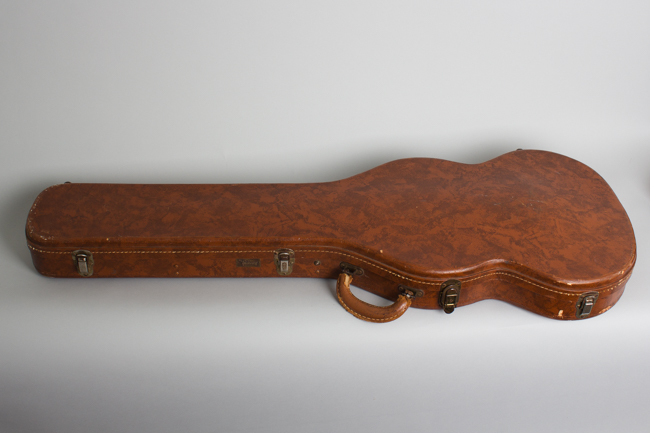 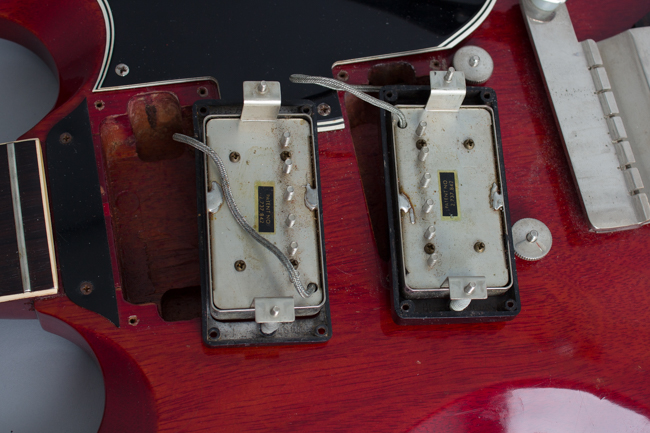 This is a lovely example of a 1962-3 SG/Les Paul Standard, one of Gibson's all-time classic solid body guitars. This one is primarily distinguished by the rare "ebony block" Vibrola tailpiece, a short lived feature seen only in this period. With a cherry lacquer finish on its exquisitely sculpted double-cutaway body, this was a very radical-looking and feeling instrument in its day, offering more unencumbered neck than anyone had ever seen! This style "Standard" replaced the original single-cutaway Les Paul just at the end of 1960, a statement of guitar modernism from the often derided as overly conservative Kalamazoo company. While the original single-cutaway Les Pauls roared back to favor later in the 1960s, this slim and supple SG has also now been played for generations. Les Paul himself was not a fan of this design, and his name was removed from the model later in 1963.

This LP/SG has one of the VERY first few 90000 series serial numbers recorded as issued in 1963 (the first was 96601) so technically was almost certainly built in late 1962. It mounts two very hot yet still sweet early "Patent Number" humbucking pickups, identical to the final PAF's and one of Gibson's finest sonic creations. The wiring is untouched and the original pots are topped with "capped" back-painted plastic knobs. The hardware is all nickel plated including the original style no-wire Tune-O-Matic bridge; this is the special vibrato version with undercut ends and the very rare bone saddles, something of a stop-gap between the metal and nylon variants. The then-new Gibson vibrola tailpiece is decorated with the extra pearl-inlaid ebony tailblock, which has no structural function but does dress the guitar up a bit!

The bound rosewood fingerboard has trapezoidal pearloid inlay and larger frets typical of the period. The neck profile is not as slim or "flat' feeling as the 1960-61 version, with a rounder back and more dressed-away sides, somewhat less chunky than the typical '64-5 version. The feel gets noticeably heftier as it approaches the body. The headstock has double-ring Kluson deluxe tuners and Gibson's classic "crown' inlay on the face. The "Les Paul" markings are engraved into the truss rod cover.

For connoisseurs, this was a great period for the entire SG series, but particularly the Standard. Despite perhaps being a bit lightly built for the abuses of the road, these early Les Paul-marked SGs with the beautifully sculpted mahogany bodies and transitional PAF/Patent # pickups have an aesthetic and sonic character unlike any others. They actually have a chiming, bell like sound at low volume but of course are now most highly prized as rock machines. While fairly popular when new they really came into their own in the late 1960s with the advent of high volume amplification (from Marshall, especially) unleashed the screaming beast within!

Exactly 1449 of these elegantly badass guitars were shipped in 1962, with an amazingly consistent 1445 shipped in 1963, of which this is likely one of the first. Most of these have been far more heavily used than this one, which oddly enough lives in the still-1950s pattern original 1960-61-era brown pink-lined hard case, a very rare item in itself. The SG Standard remains a very popular guitar; it had a particular heyday in the late '60s and early '70s -- anyone who has seen live footage of Cream (or dozens of other period bands) in 1967-8 knows what these ultra light and responsive SG/Les Pauls are capable of! One of the classic rock guitars of any era, this is actually a more versatile instrument than many think.

Overall length is 39 3/4 in. (101 cm.), 13 1/4 in. (33.6 cm.) wide at lower bout, and 1 1/4 in. (3.2 cm.) in depth, measured at side of rim. Scale length is 24 3/4 in. (629 mm.). Width of nut is 1 11/16 in. (43 mm.).
This is a very fine example of a 1962-3 Les Paul Standard, showing some use but generally quite well-preserved for this particular model. The heel joint is the major trouble spot in all early SGs, often either partially or wholly broken. This one shows chipping to the overcoat along the sides of the joint and the tiniest stress crack just off the bass side of the heel tab. The neck heel has never been cracked or the neck off; the heel area recently had a very artful hide glue infusion that solidified the neck joint at an unusually good angle for these, so the vibrato works especially well. The headstock is also completely free of the common cracks.

The finish is completely original with no touchup or overspray, and retains a strong cherry color with the only noticeable fade on the back of the neck from hand contact. The lacquer shows some light checking, dings, and scuff overall with some scratching on the back but no major loss; the back is amazingly free of buckle rash. There is one small cigarette mark on the headstock face below the low E tuner, but the edges are cleaner than most.

The hardware is all original and complete, with the exception of four of the tuners. The set is complete, but four of these are in the case pocket with deteriorating buttons; the headstock currently mounts several later '60s tuners with period correct buttons that match the remaining originals. The entire original set could be restored with correct replacement buttons if desired. All other hardware is intact, including the oft-missing vibrato arm with its screw and nylon bushings. The nickel plating and metal knob caps have some light corrosion, and the original pickguard has shrunken up just slightly but has no cracks.

This is one of the best playing Les Paul/SG's we have had, which the excellent break angle off the vibrato is definitely a major factor in. the original frets show some light wear in the lower positions. It offers sounds ranging from sound sweet to snarly, or truly rampaging when pushed into overdrive. This ebony-block beauty rests in its rare original brown case looking fast just sitting still and to this day one of the wickedest rock machines ever conceived. Excellent - Condition.
×