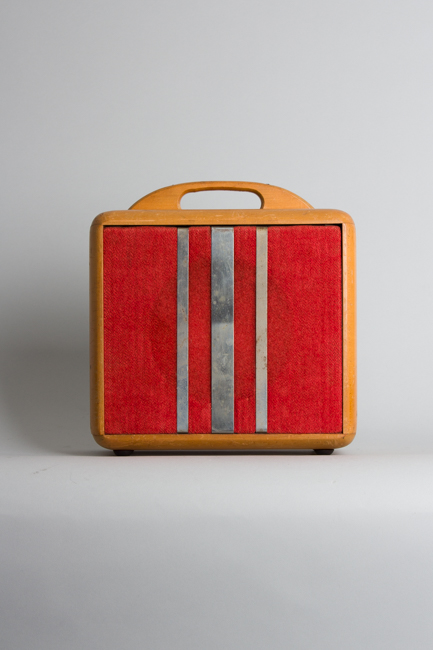 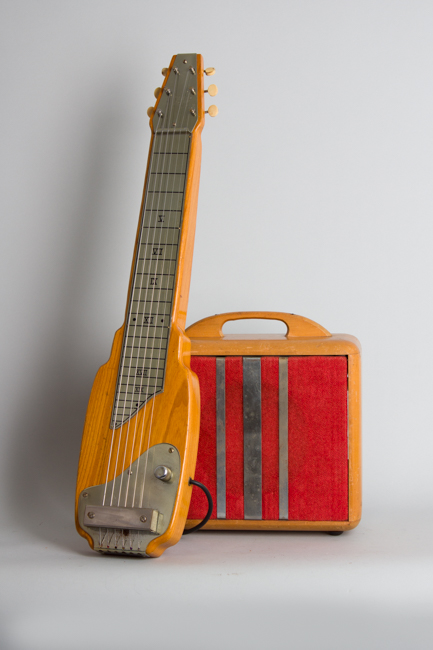 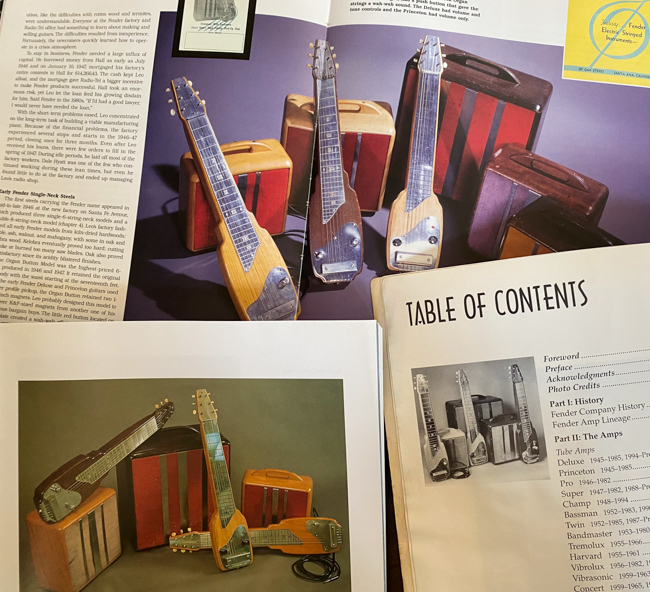 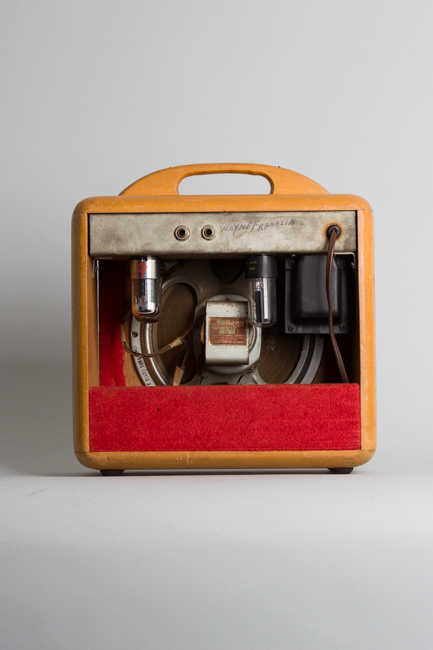 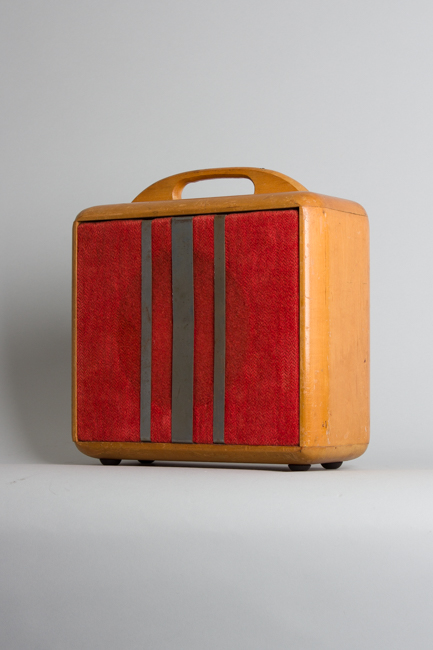 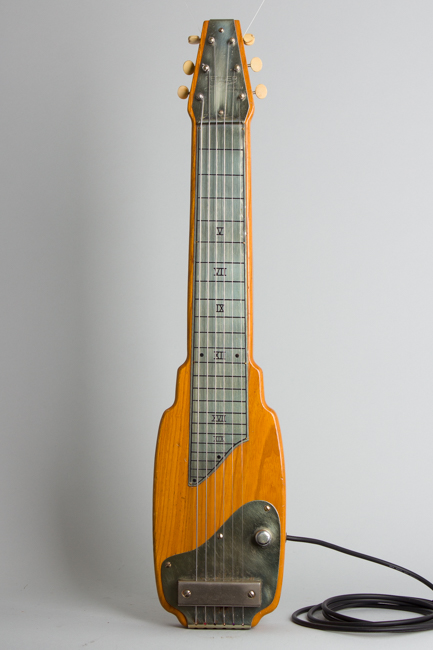 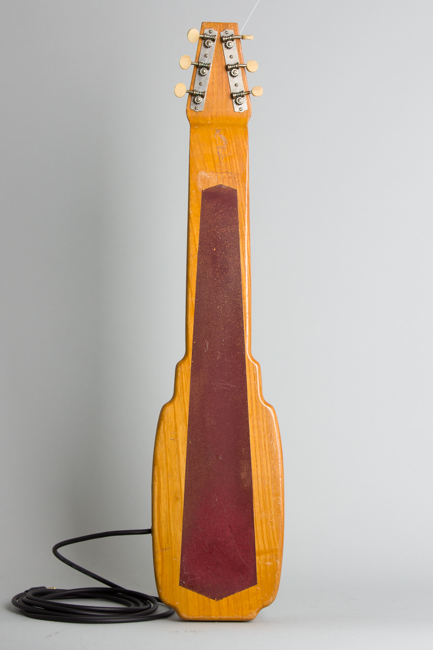 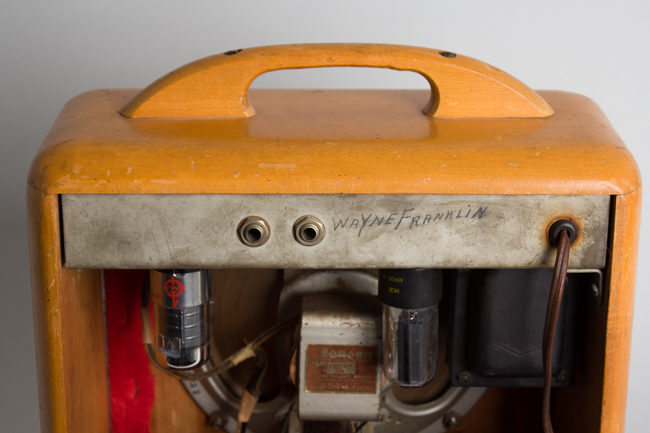 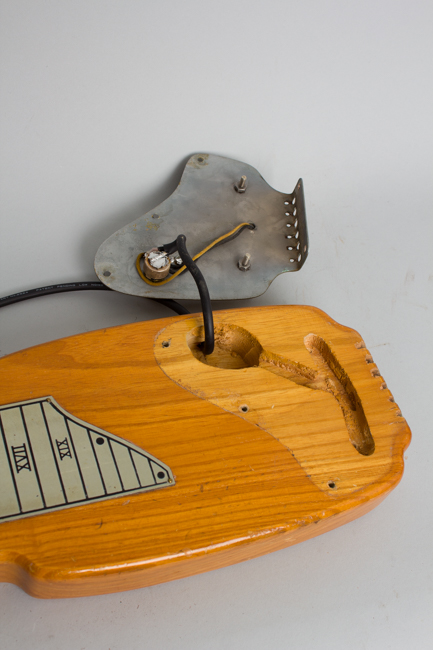 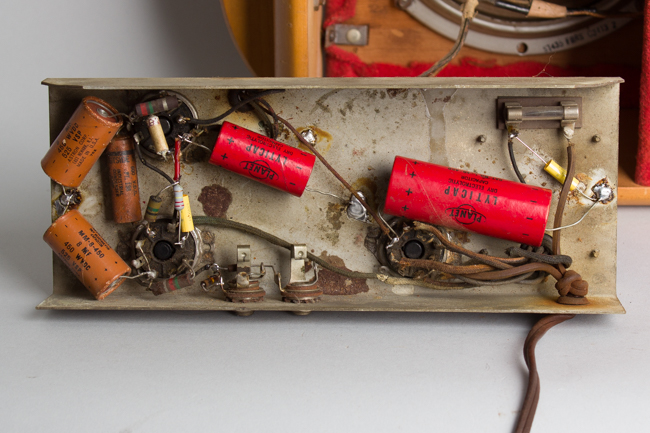 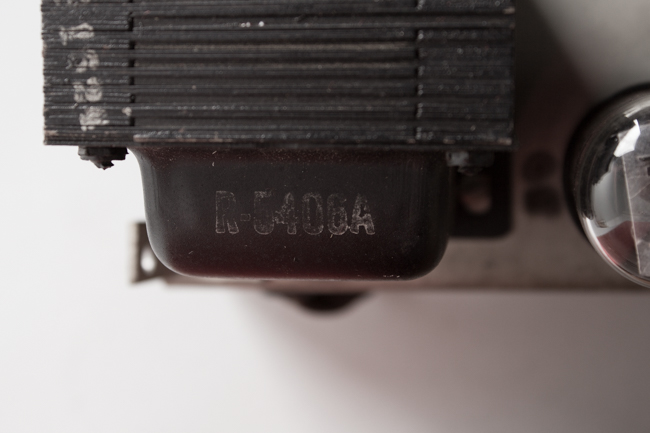 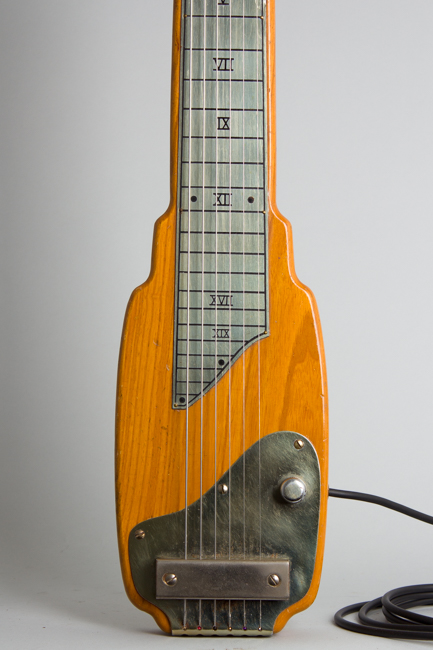 This is one of the earliest products of the young Fender company, a "Student" A/K/A Princeton lap steel and amplifier set from 1946. These lap steel/amp sets were the first products to bear the Fender name, following directly on the short-lived K&F line. Leo Fender's partner in K&F, Doc Kauffman was unsure of the future of the business, so Leo gave him a punch press and soldiered on! This 3 tube, amp and lap steel set was the most basic new Fender product designed primarily for teaching studios.

All Fender amps trace their lineage back to these first 1946 "Woodies". The new trio: Princeton, Deluxe (also referred to as "Model 26") and the Professional were a step-up in design and construction from the earlier K&F amps. Built with elegant, simple hardwood cabinets (inspiring the collector's nickname "Woodie"), their ruggedness, sound quality and reliability far surpassed most standards of electric amplification of the time.

Released in the spring of '46 and lasting only about a year and a half, the three models shared a design look and some circuitry. The hardwood cabinets came in "gleaming blonde maple", "black walnut" and "dark mahogany". Their plush grille cloths came in red, blue and yellow/gold, with matching material on the rear lower panel. The front has three metal strips running vertically over the speaker opening. The thicker center strip is flanked by two thinner ones, which Fender claimed added "flash and brilliance to their already sparkling appearance". All were topped with a wooden handle and the upper-tier models had rear-facing control panels with a new logo reading "Fender Electric Instrument Co., Fullerton, California" accompanied by the K&F lightning.

This Princeton, the student/entry-level model was smallest and simplest of the three. The single-ended 6V6 design puts out around 5-6 watts into a single 8" field-coil speaker (permanent-magnet speakers were not available until 1947). It uses the most basic circuit possible - three tubes (6SJ7 preamp tube, 6V6 power tube and a 5Y3 rectifier) and no controls! The steel guitar had a volume pot, so why put one on the amp? On/Off switch? Unplug it from the wall when you're done! The amp WAS equipped with two input jacks, to allow the student and teacher to plug in side by side.
.
Based on surviving examples this amp is rarer than the Model 26 DeLuxe, a more versatile pro model with some distribution reaching outside Southern California. The Princeton is nearly as rare today as the 15" "Professional", which were seemingly only built to order. The Princeton name would carry onwards as a Fender staple over the next several decades, with its tweed-clad "TV-front" iteration released in 1948.

The matching lap steel is also a rare early Fender product, using Leo's original "Direct String" pickup mounted on a sculpted hardwood body with a volume control and hard-wired cable. Construction is simple in the extreme with some fascinatingly crude hand routing under the metal coverplate! The steel carries serial # A-201 on the back edge and some typical budget period strip tuners.

This well documented set has been owned for decades by historian/authors John Sprung (1980s -'95) and John Teagle (1995 - present). They have been pictured in several books including "Electric Guitars & Basses, a Photographic History" by George Gruhn & Walter Carter (pg. 33), "Fender - the Sound Heard 'Round the World" by Richard Smith (pg. 32) and "Fender Amps - the First Fifty Years" by John Teagle & John Sprung (set on pg. 4, amp only pgs. 25 & 48)

This is a beautiful, very nicely preserved and original example of one of the earliest Fender products we have ever seen. The cabinet is in great shape considering the amp is celebrating its 76th birthday! There's some typical wear and minor scuffs, but the "gleaming blonde maple" finish is largely intact. The plush red grille cloth is mostly untarnished along with the protective metal strips, save for a few scratches along the edges of the larger center strip. The cabinet bears the name and address of a Wayne Franklin, presumably the original owner of this amplifier, that name also marked on the back of the chassis.

Electrically, the amp remains nicely original. The Jensen 8-inch field-coil F8R speaker is original, appears to retain its original cone and still sounds great! Both the power and Thermador output transformers appear original and bear the markings R-5406A and F41A, respectively. The amp has been kept as original as possible and only received bare minimum maintenance to ensure functionality while preserving historical value; this includes replacement of three caps and one resistor and cleaning of all sockets and jacks. Components that are still functioning have been left intact; the two Planet filter caps appear like older replacements and the few remaining components in the already very minimal circuitry are otherwise unchanged and appear to be original. The amp still retains its original two-prong power cord.

The steel also has some light general wear; the original pickup has been perfectly re-wound by Tom Brantley; many of these early pickups require this today. The original disintegrating hard-wired cable has been replaced; it is still included in a baggie, along with the ancient (possibly original) strings. The single pot remains original, as do the tuners with one button cracked but still functional.

DISCLAIMER: Please note that although this amp has been tested and works well currently, it does contain nearly 80 year old components that have by now many times exceeded their intended lifespan and will eventually deteriorate. If this amp is to be used more than casually, we recommend that the amp be fully serviced with all electrolytic caps replaced to ensure reliability and safety of other irreplaceable components. Because of this we are unable to warrant functionality beyond point of sale, but would be happy to offer a full maintenance and servicing upon sale, if desired.

This set is a fabulous example of nearly pre-historic Fender history, from the very beginning of Fender's legacy of great amplifiers. And, incidentally it sounds magical! Overall Very Good + Condition.
×