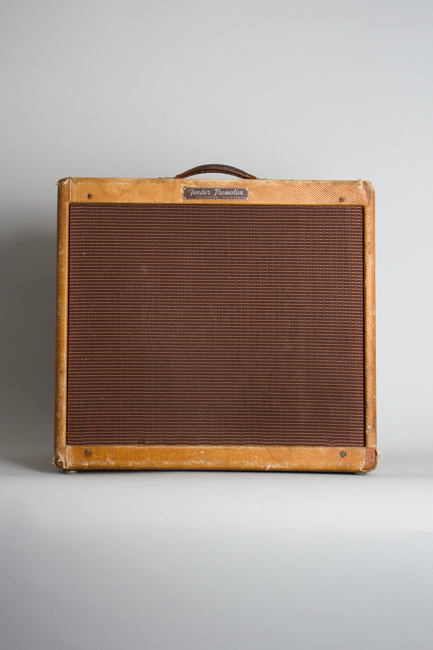 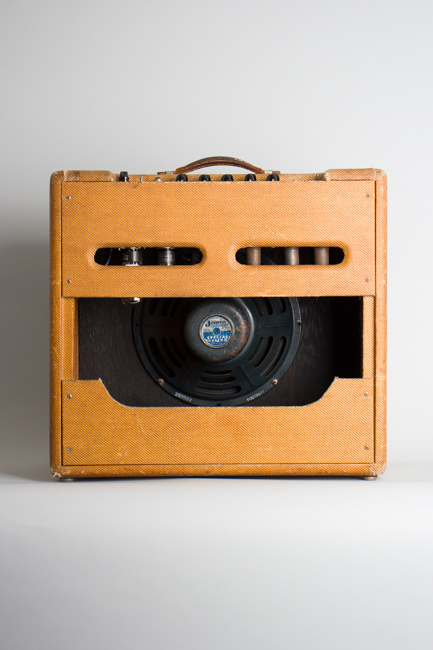 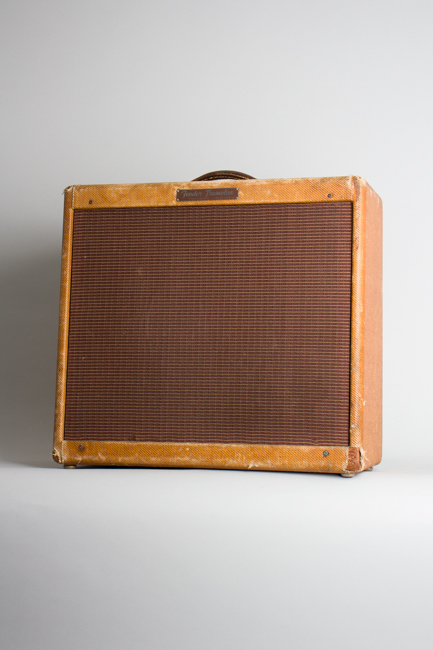 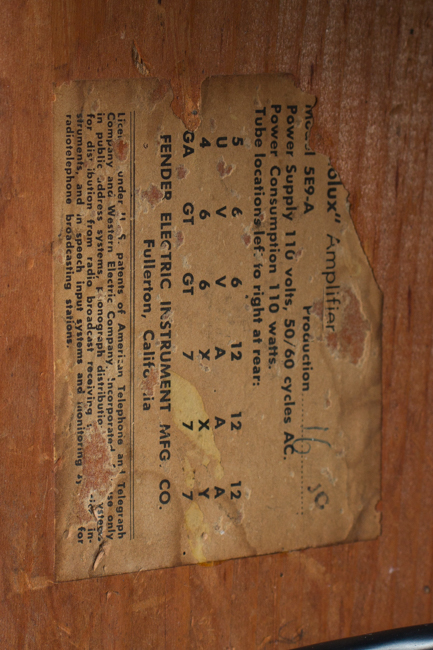 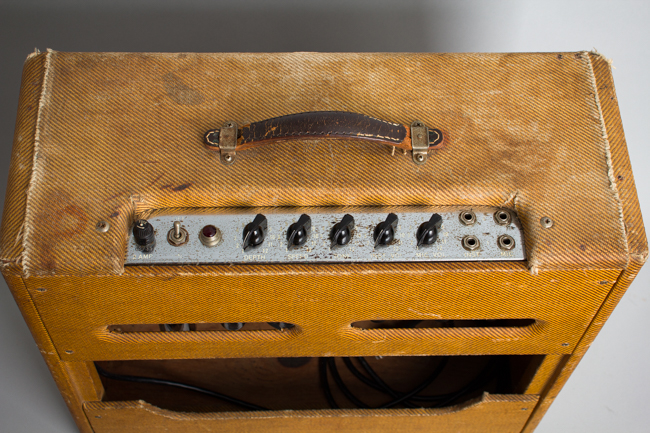 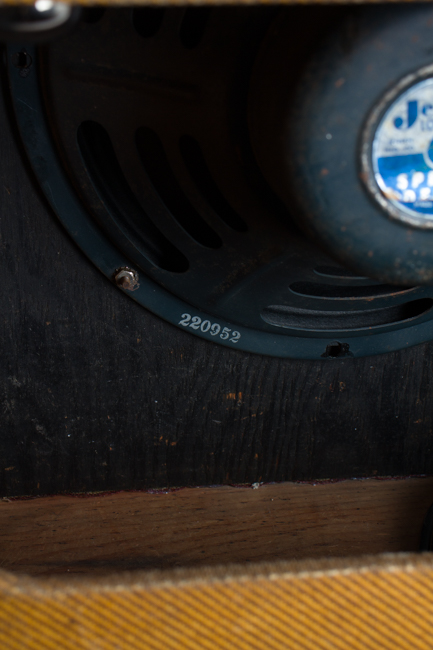 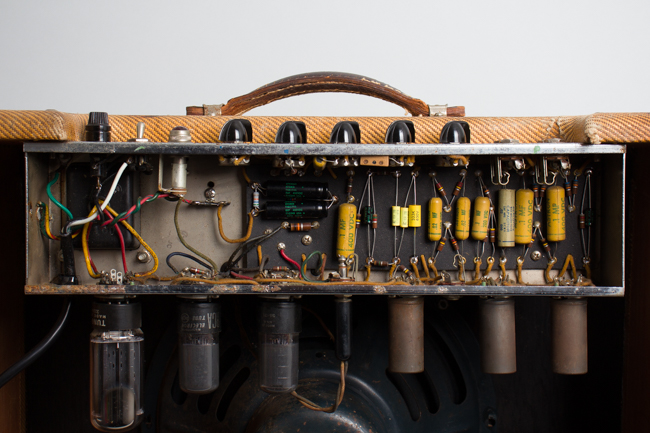 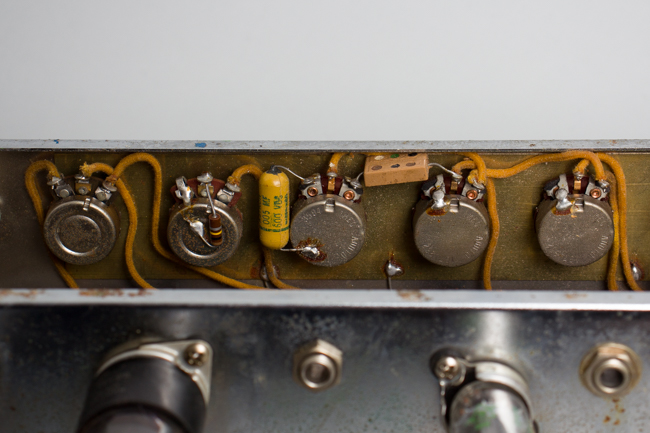 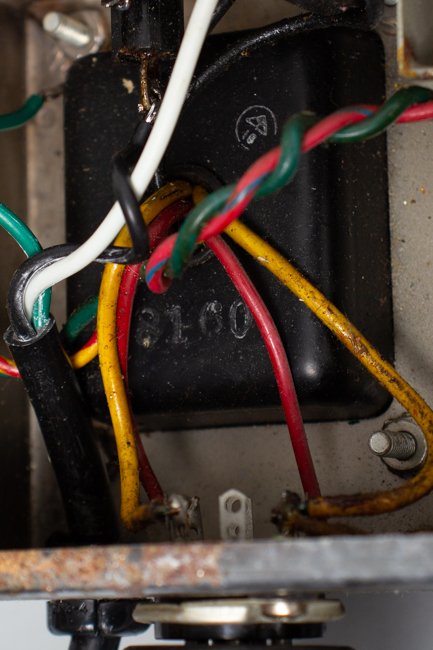 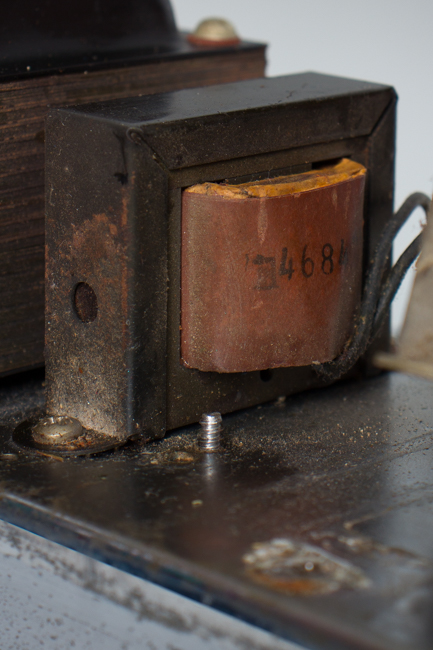 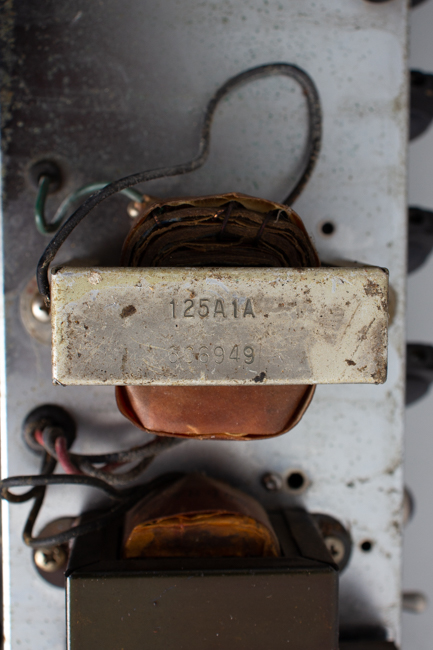 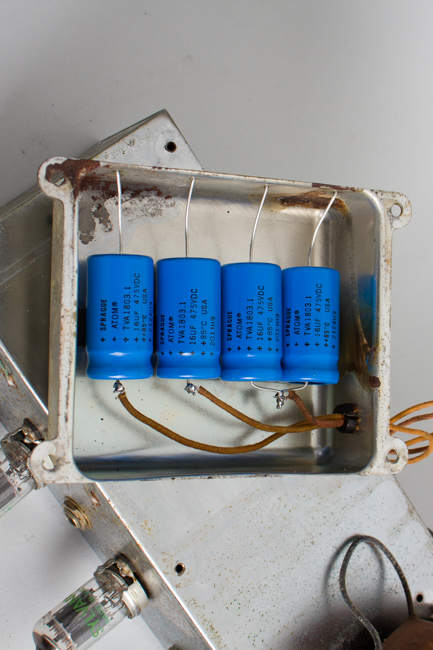 This is a well-worn but wonderful sounding example of the narrow-panel tweed Tremolux, one of Fender's enduring classic period amps and now one of rarest and now most sought-after bigger-box Tweeds. The Tremolux was introduced in 1955 alongside its smaller cousin, the Vibrolux, the two amps pioneering the company's first built-in tremolo effect.

This initial 5E9 circuit was essentially a 5E3 Deluxe with the on-board effect added in a taller cabinet. The 5E9-A revision added minor changes, but the following 5G9 circuit is a wholly different animal. It holds the distinction of being the last Tweed-era design before the launch of the new 'brown" series at the turn of the decade, which is likely the reason why it was given the 'G' denominator on official schematics, skipping the "F" for this particular model. Fender was still using up the old 5E9-A-marked tube charts and to our knowledge, no one has actually seen a 5G9 Tremolux with a properly marked tube chart! This particular chart has the 5E9-A crossed out and 5F9 added by hand; the handwriting appears the same as the serial number next to it, thus almost certainly done at Fender.

The circuit itself is a fairly big departure from its predecessor. It borrows the power section from its bigger sibling, the revered 5F6-A Bassman, while the fixed bias, long-tailed phase inverter and the higher voltage of the 5U4 rectifier results in significantly more volume, headroom and an overall 'tighter' response than a 5E3 Deluxe. The dual-6V6 power section yields around 15-18 watts of power. Still sporting the modest-sized 12" Jensen P12Q speaker in the oversized tall cabinet of the Pro (designed to fit a 15" speaker), the format has a similar low-end enhancing effect found in the Vibrolux 5F11; sturdy bass with overall more acoustic 'breadth" to the sound.

Like past Tremolux models, the control panel features two channels and corresponding four input jacks (which can be jumpered for more saturation) a volume control for each channel, a master tone control as well as depth and speed knobs for the tremolo. The tremolo is the classic swampy "power tube bias-vary" style and sounds exceptionally smooth and deep.

Cosmetically, the amplifier has a lot of external wear, but remains a nice "player's" example with a great "relic" look and a fabulous sound. The tweed covering shows its share of wear, particularly the top of the cabinet, showing some staining and fraying at the edges and seams. The rest sports a darker, smoky color typical of well-used Fender amps. The control panel shows some corrosion and moderate amount of scuffing, though the majority of the stenciled graphics are intact. The original handle is just as well-worn but still has some life left in it.

Electrically, this amp is all original. The tube chart bears the stamp JC, indicating a production date of March 1960. The serial number is 02739;According to available sources Fender only made around 700 of these amps in 1960. The original 12" alnico Jensen P12Q speaker (marked 220-952) dates to the 52nd week of 1959, has been professionally reconed and sounds fantastic. The Triad power, choke and output transformers are original as well and are marked 8160, 14684 and 606-949, respectively, dating the latter to the 49th week of 1959. Visible pot codes all date to late 1959 as well.

All other components appear original to the amp and solder joints appear untouched as well, including the grey two-prong power cord. Although barely legible, the piece of masking tape inside the chassis appears to bear Lily's signature -- we are big fans of her work! The amp has seen our typical maintenance and servicing, including replacement of all electrolytic capacitors, a grounded 3-prong power cord, cleaning of all sockets, pots and jacks as well as biased to spec.

This is a great "Ragged but right" player's example of this timeless 18-watt wonder. Very Good + Condition.
×