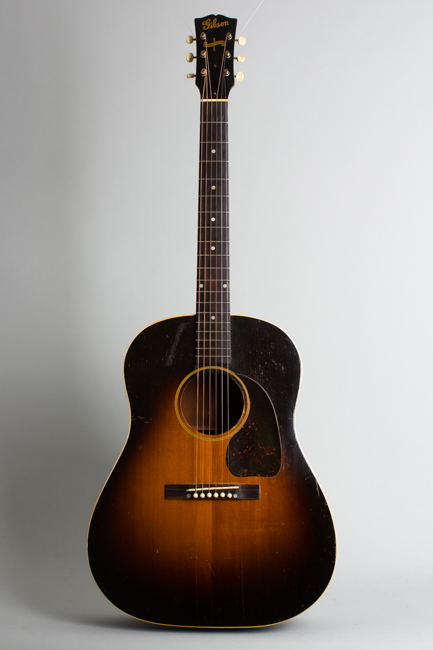 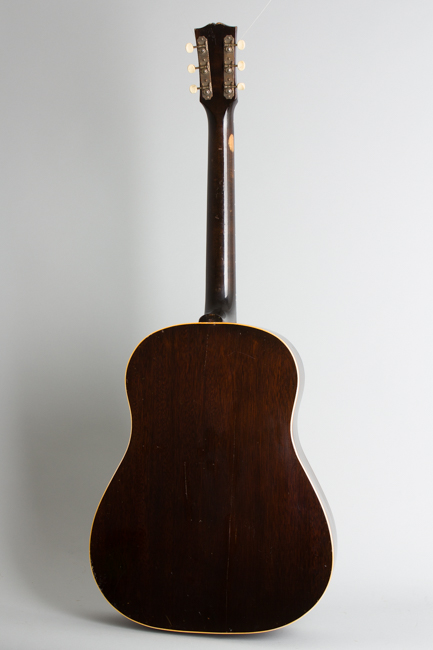 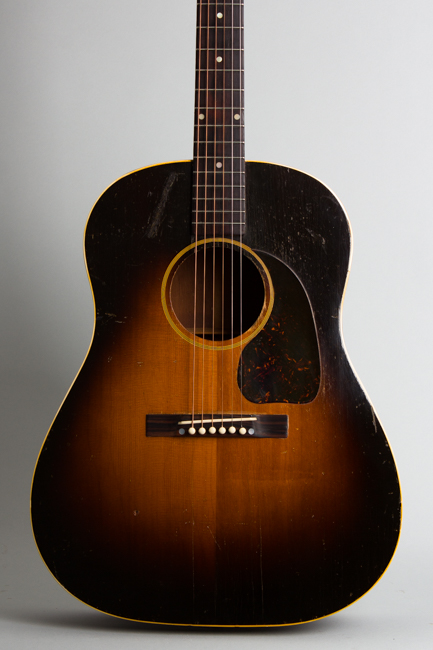 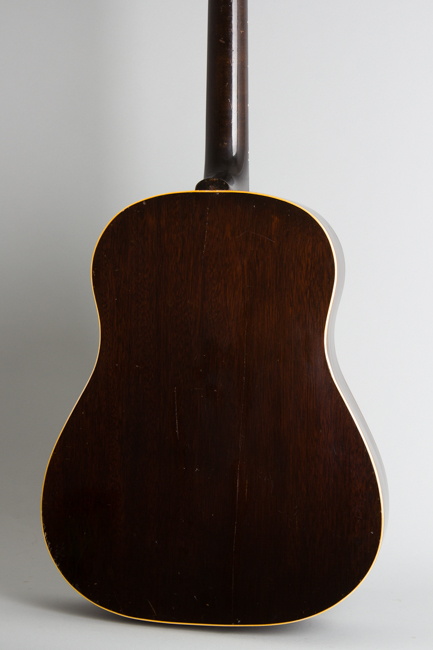 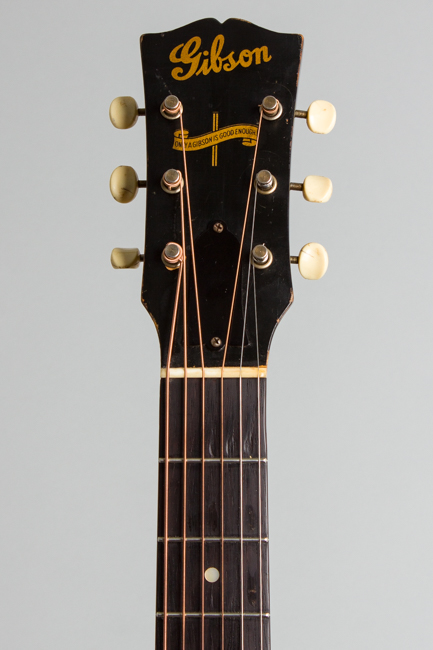 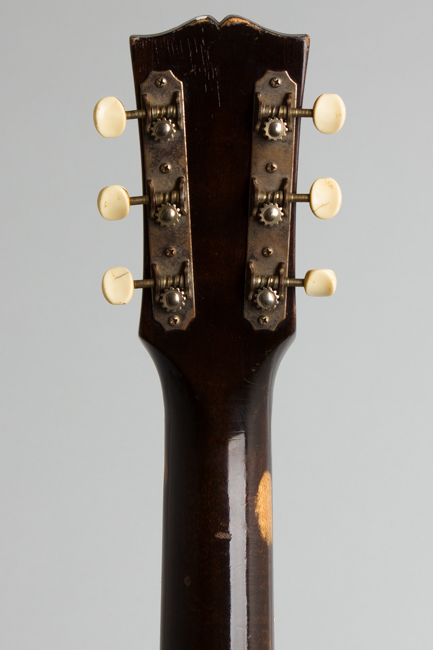 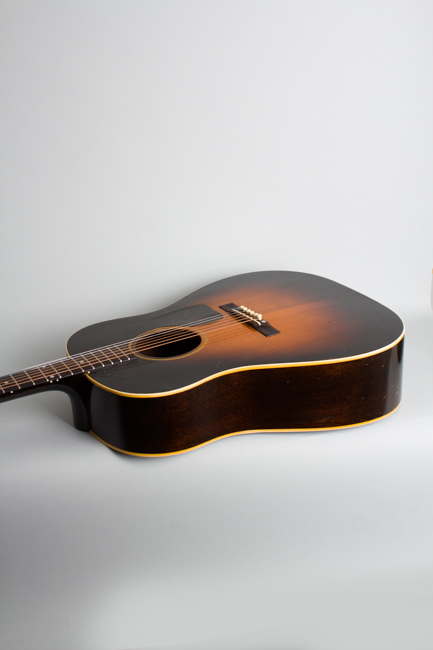 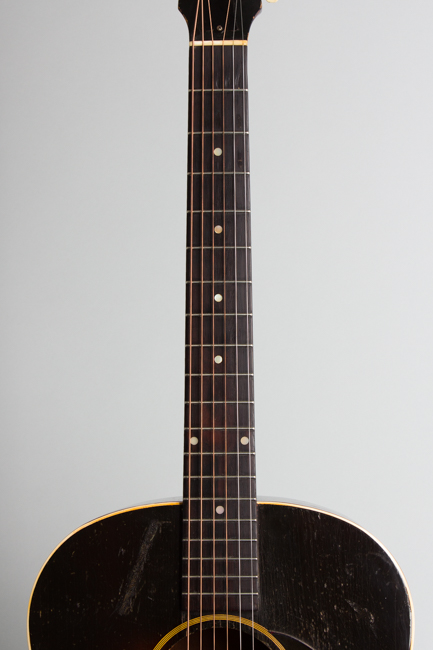 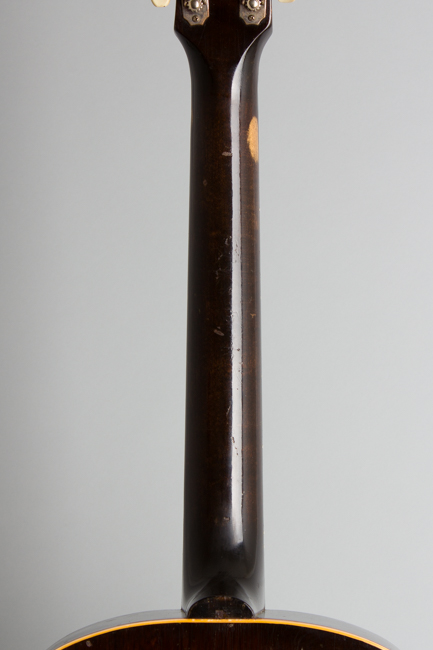 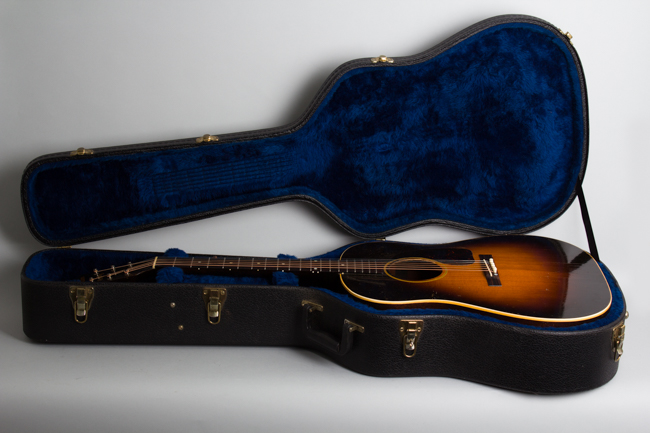 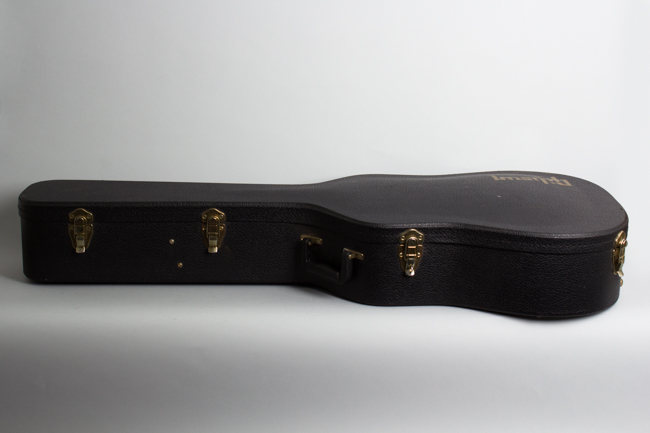 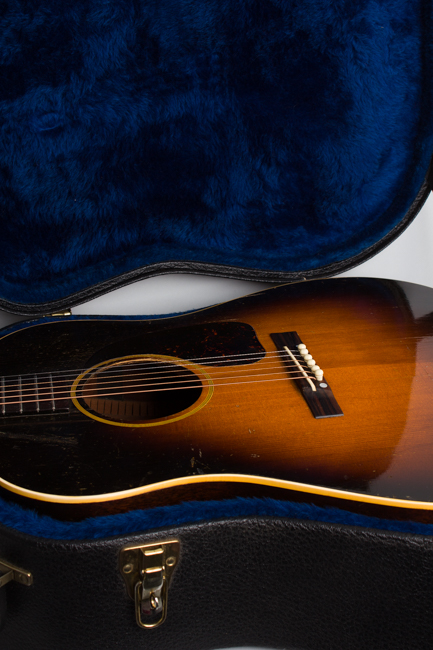 This beautiful Gibson J-45 was built deep into the Second World War period when the company's instrument production was severely limited; flat top instruments like this were the only product they shipped in any real quantity. While Gibsons can be often inconsistent the specifications of individual instruments in this era often vary widely, dictated by the materials available.

The body of this particular guitar has the standard combination of a sunburst-finished spruce top over the mahogany back and sides specified or the J-45. The neck appears to be made from a single piece of maple, with the Gibson adjustable truss rod fitted. While multiply laminated maple necks are a known "banner" variation a one piece neck is fairly unusual; it is possibly this one is actually three-piece with no alternating strips but if so the seams are so discreet as to be invisible.

This guitar is also fitted with the adjustable steel truss rod often deleted from production in 1943 and '44 as metal was severely rationed but still inexplicably appears on some instruments, as is the case here. The maple neck is built to a substantial profile but not as thick as some with a comfortable round backed profile. Some banner necks approach "Louisville slugger" proportions; this one is not QUITE that big.

There is no Gibson Factory Order Number (FON) on the heelblock, which has squared ends. The instrument was likely made in 1944 (possibly 1943) according to recent research. The soundhole rosette is the earlier 7-ply style, while the top and back are single bound. The headstock bears the wartime gold script Gibson logo over the "Only a Gibson is Good Enough" banner decal that gives this era's guitars their identifying nickname. The tuners are the wartime Kluson strips with very thin riveted gears using the absolute minimum of metal.

The sunburst top finish is deep and rich with a stately hue; the finish has some wear but overall is still very attractive. This is a huge sounding guitar that has survived nearly 80 years in fine playing condition, showing some scars but still a fantastic instrument.

This guitar shows some typical wear and repair but remains relatively clean overall for a wartime J-45; the Gibson flat tops of this era have often been played heavily over the decades since WWII and many of the survivors are quite well worn by now. The instrument shows finish wear and some typical maintenance repairs but no serious damage or alteration.

Overall the finish is cleaner than many with some typical checking and dings, dents and scratches overall. There is one long scar to the top above the fingerboard that looks rather like a burn mark, we wonder if a cigarette once burned itself out there. The top has some minor areas of pickwear, most notably around the pickguard and next to the treble side of the soundhole. There is a deep dink into the wood on the lower bass bout, and some scattered dings and scrapes. The back has one deep scratch and some dings and dents but none of the common belt buckle wear. The back of the neck has some small dings and dents but no heavy capo wear; there are spots worn away on both sides down by the nut conveniently showing the white maple underneath the dark finish.

The original bridge was reglued with some scars around it from then process, mostly on the forward edge. It also looks to have been cut down just a bit. The mounting bolts have been removed under pearl dots; the original small maple bridgeplate is intact with the holes for them still visible.

The top shows two sealed spruce grain splits behind the bridge, one extending from the low E pin to the back edge, the other off the back edge farther towards the treble side; both are well closed. There are a few other sealed short grain cracks, one extending forward from the top of the pickguard and several below the fingerboard extension.

The back has a long sealed crack running along much of its length from the back edge above the center seam, another short one by the neck block and a few shorter grain marks that do not appear to have ever opened up. Internally the delicate bracing is all original; several of the back braces appear to have been reglued long ago.

The neck has been reset and the fingerboard trued refretted with period-appropriate wire; some small divots were filled in the lower positions. The bone nut appears original, shimmed up just a bit. There appears to be a small sealed crack on the treble side of the heel that does not extend to the centerline, there has never been a strap button added. The original flat-plate wartime Kluson tuners still function well with their original white plastic buttons in place. This instrument has had some adventures along the way but more recently has been well cared for; all work has been done to a high level. This remains truly excellent playing and sounding guitar, powerful and punchy, but with a very smooth even sound, equally excellent as a strummed rhythm machine or fingerpicked. Overall Very Good + Condition.
×