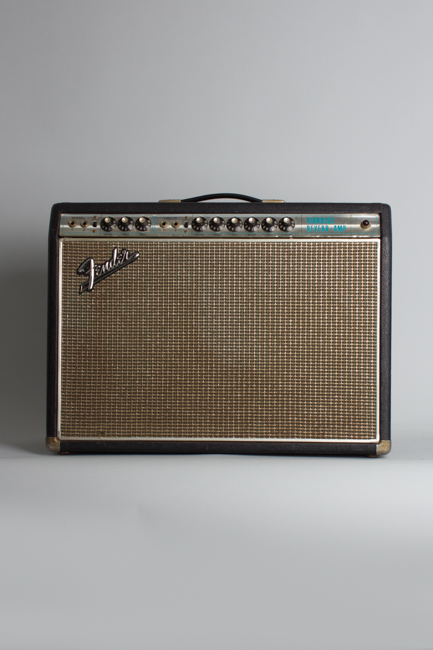 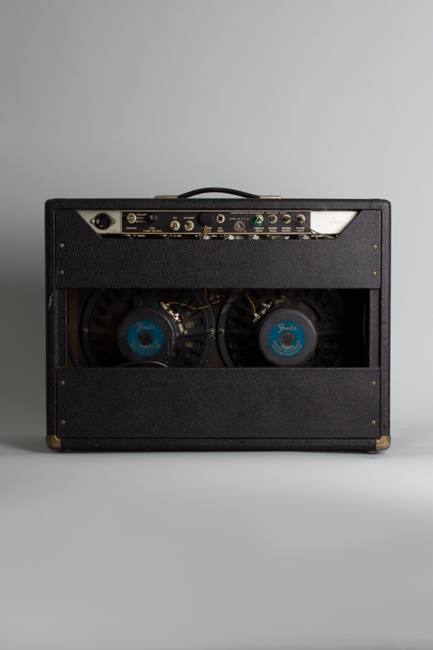 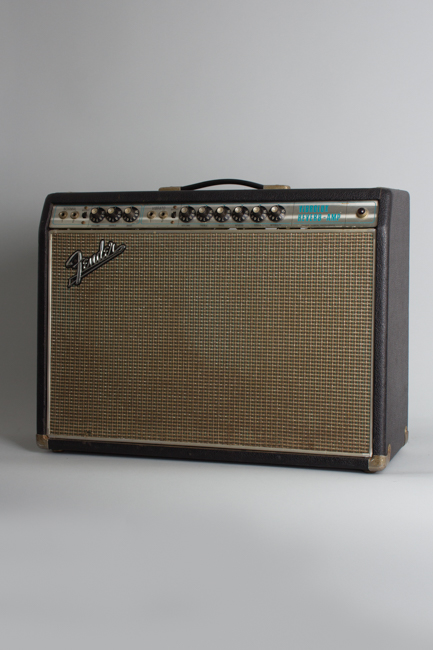 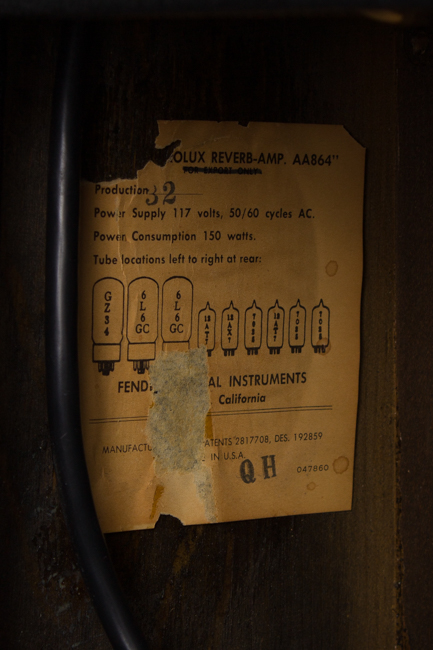 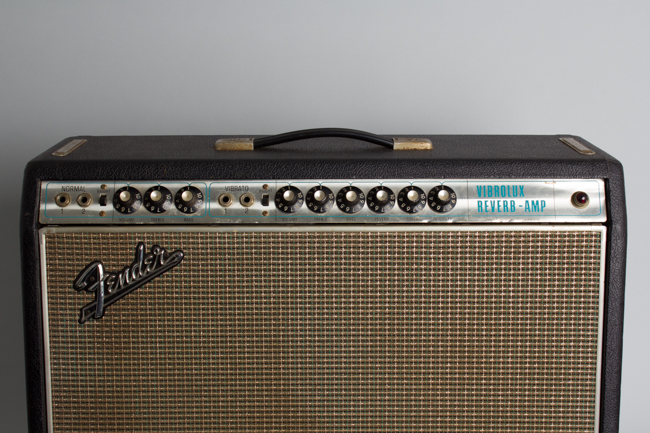 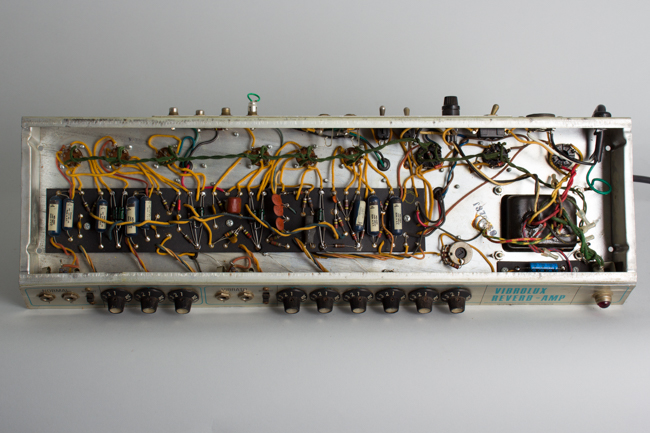 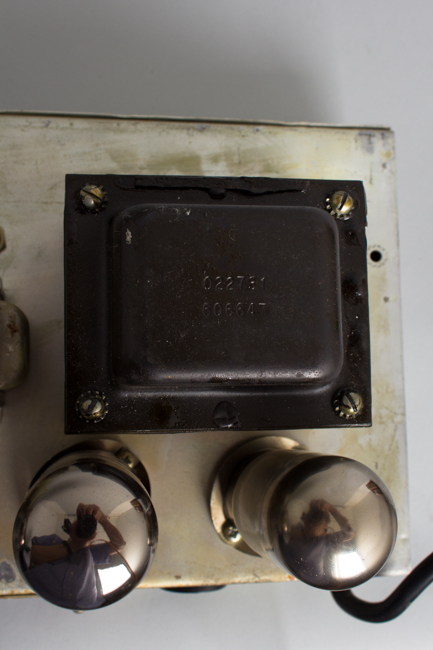 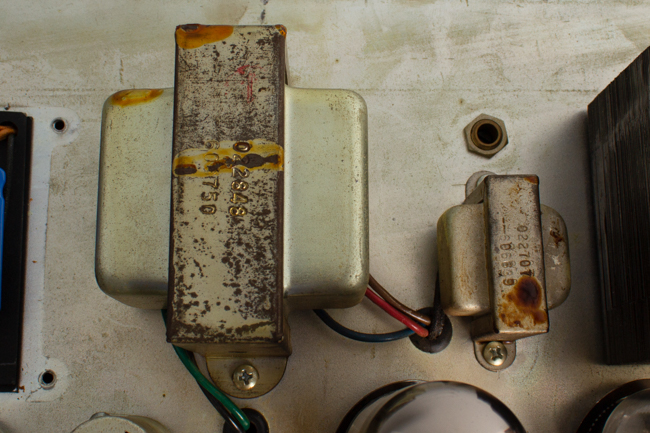 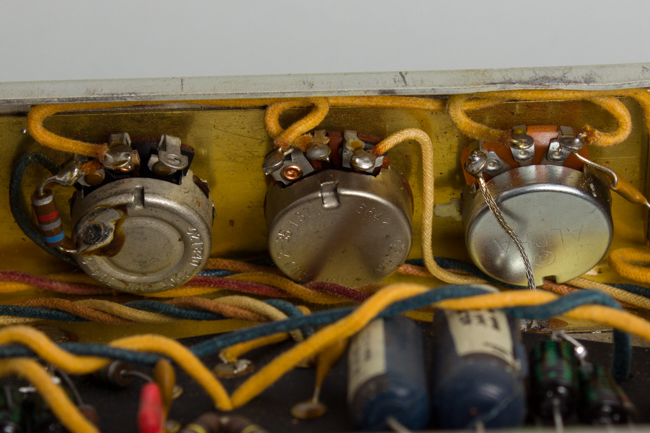 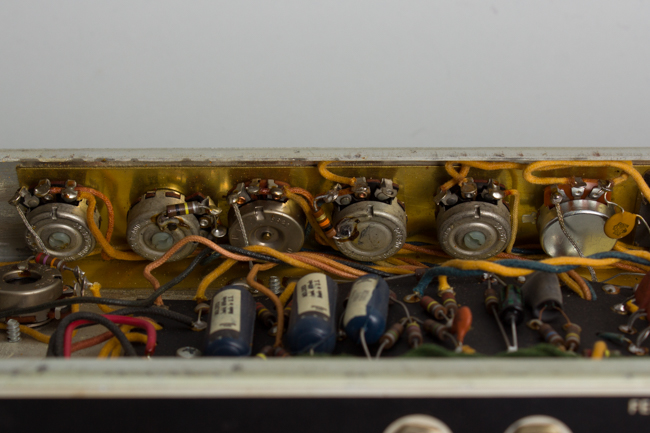 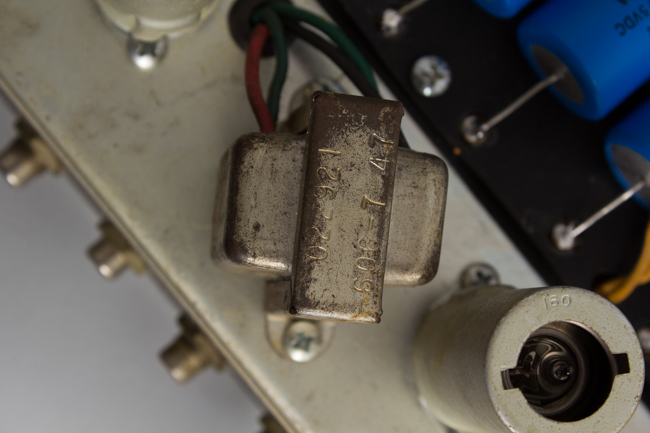 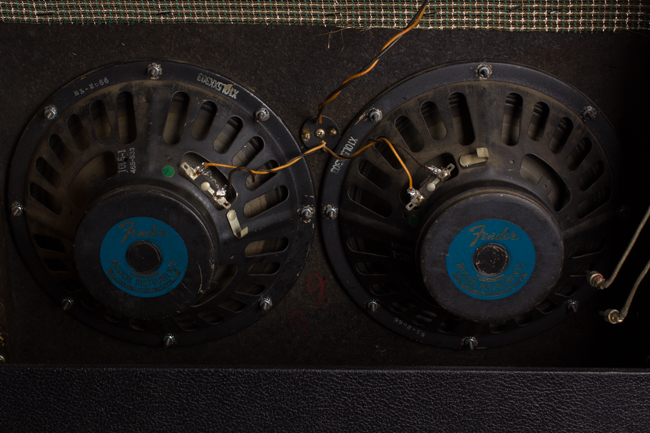 This is a fine sounding example of an CBS-era Vibrolux Reverb, still retaining the same pre-CBS AA864 circuit used from 1964 to mid-'67. The tube chart marking is QH, indicating the cabinet was assembled in August 1967; the amp is from later in the same year and speakers are dated to 1965 thus this unit is likely a marriage of several closely-dated original components.

Being the smallest member of the 6L6 driven black-panel family, its sweet breakup and tonal character comes partly from the smaller speakers, power and output transformers than found in its larger siblings the Super Reverb, Vibroverb and the Pro Reverb. With two 10" speakers and dual 6L6 power section putting out about 35 watts, the Vibrolux Reverb is one of the best sounding and most versatile amps in that all-time classic line. 50+ years later The Vibrolux remains one of Fender's best period designs and an excellent choice for both gigging or recording purposes.

This is a fairly clean amp, showing just some light wear overall. The black Tolex covering shows some minor dings and moderate wear mostly around edges and corners. The handle is original and the hardware, as well as the chassis straps on top is showing light-to-moderate signs of corrosion. The grille cloth and baffle retains the "drip edge" metal trim around the edge, a well-recognized feature of the initial Silver-panel years. The cloth itself shows some typical darkening from many years of use but otherwise remains free of any notable tears, save for one very minor fray at the very lower left edge. The baffle has had alternate screw holes drilled as the originals were heavily stripped and beyond saving; not uncommon for this era of Fender, as CBS decided to save money by using particleboard (in place of the earlier plywood) for baffles. The faceplate shows some typical wear but no major injuries and all the knobs are well intact.

This amp has all original period components but is likely somewhat of a "Fenderstein". As noted the cabinet tube chart marking is QH, indicating assembly in August 1967. The two ceramic 10" Oxford 10L5-1 speakers bear the codes 465-533, dating them to the 33rd week of 1965. Although it is possible they were pulled from older stock in mid-1967, we can't verify their originality to this cabinet. That being said, they are a matched set of the correct pair for the amp and sound fantastic.

The amp chassis itself retains the original power, choke, output and reverb transformers, bearing the codes 606-647, 606-639, 606-750 and 606-747, dating them to the 47th and 39th week of 1966 and 50th and 47th week of 1967, respectively. Additionally, the latest original pot code dates to 47th week of 1967 (two pots have been replaced). All solder joints appear original and we see no evidence of component replacement other than the two pots, indicating that this chassis and cabinet are likely from two different amps dating only a few months apart. This may have been a later thoughtful re-assembly or a blown amp replaced by a dealer way back re-using the initial cabinet. Whichever it was, this remains an amp with original transformers in a cabinet with original or period speakers -- all dating within the same year.

The amp has been fully serviced with a 3-prong cord installed, all jacks, pots and switches cleaned and all electrolytic caps replaced, including the line-to-ground "death cap". The coveted Blue Astron signal caps are wonderfully intact and sound great.

This is a lovely player's example overall, with the excellent sound of last year of this eternally revered black panel line of circuits. Excellent - Condition.
×