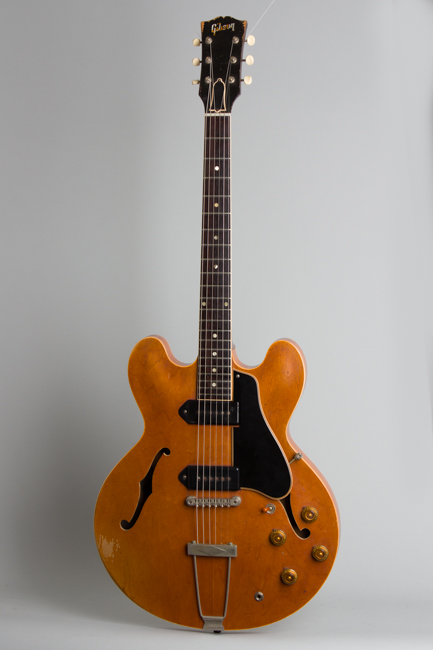 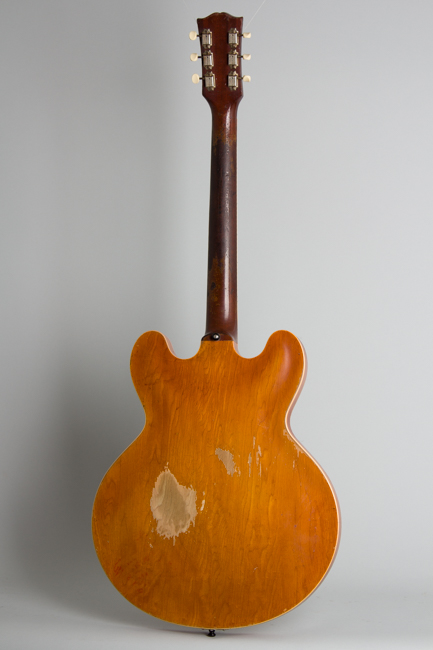 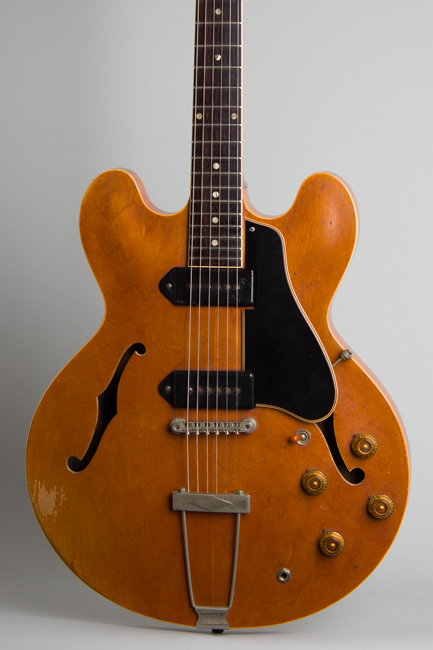 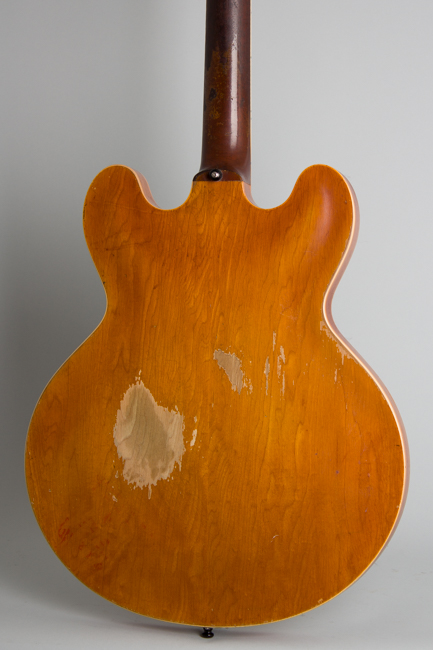 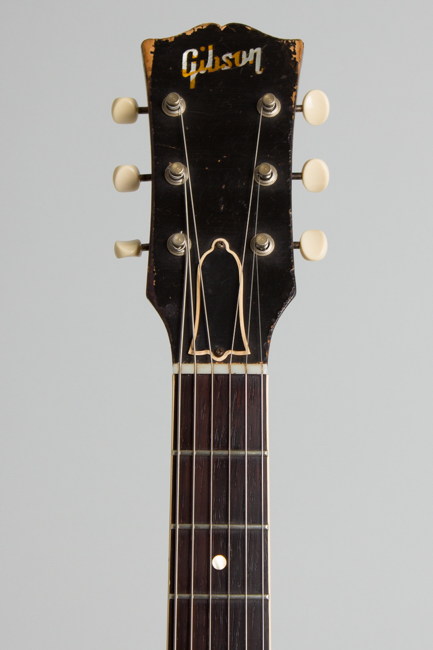 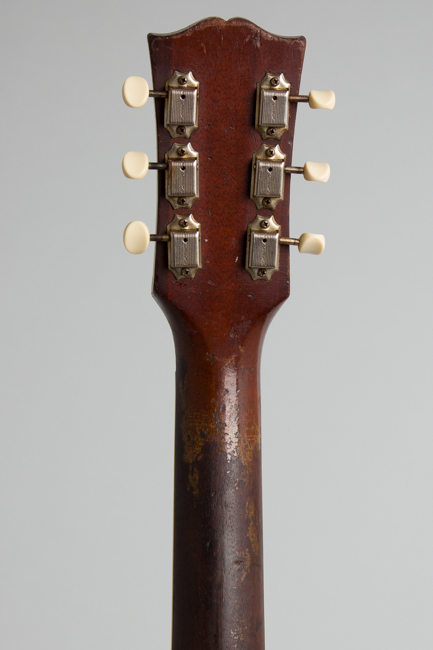 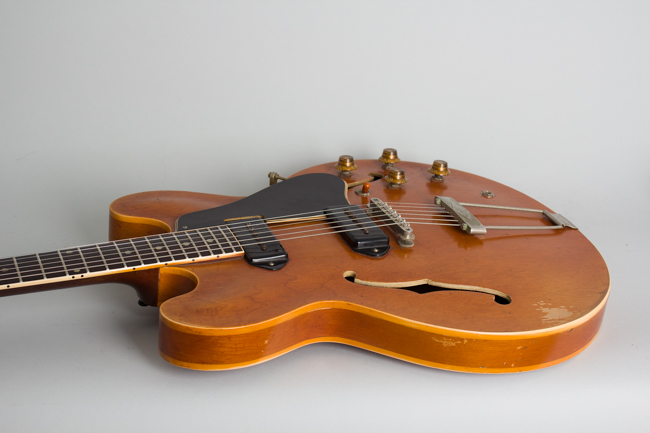 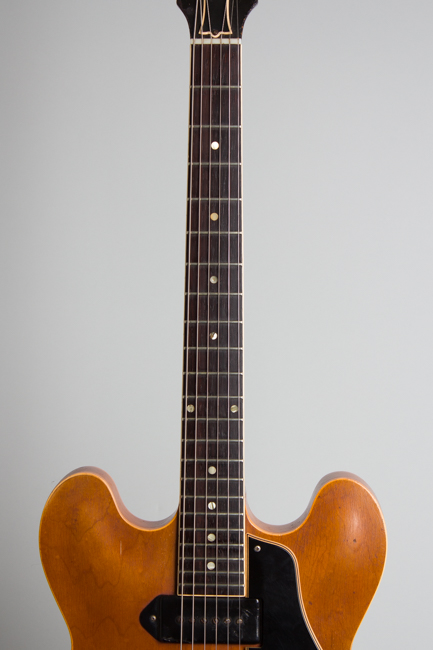 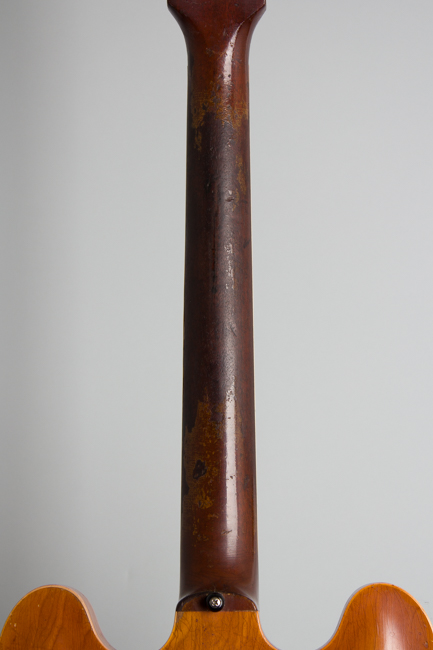 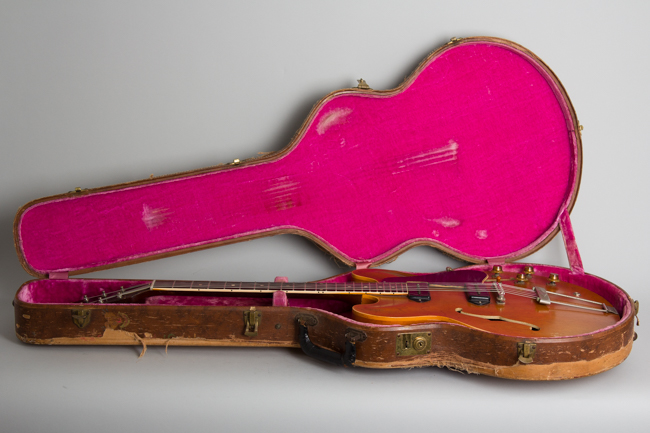 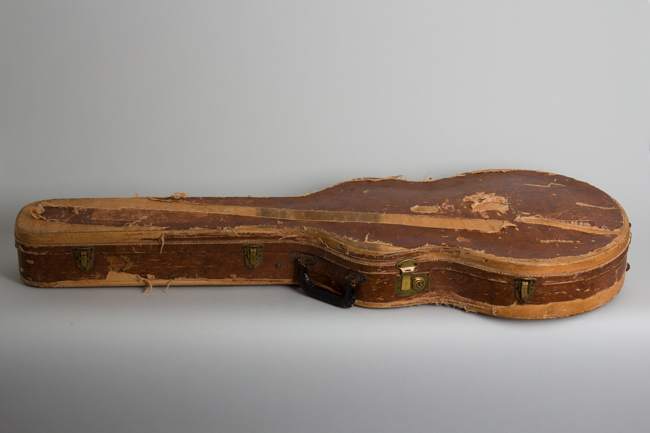 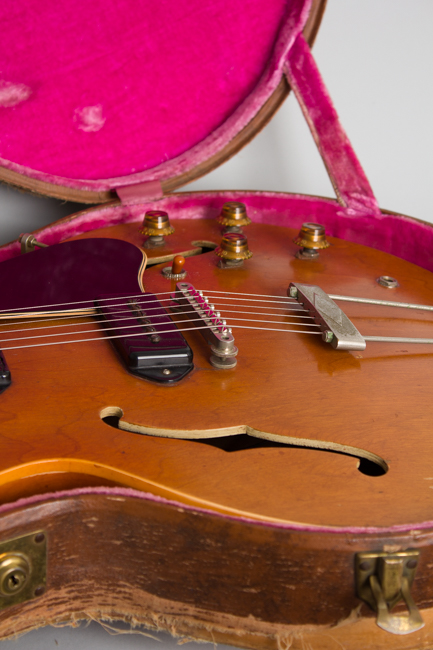 Here's a guitar that really shows what "Genuine Relic" is really all about! It is a super heavily played, rare and supremely vibey first-generation blonde ES-330TDN from 1959, the debut year. This guitar has wear practically everywhere, but remains very original sporting all the earliest features including a bound dot-inlaid rosewood fingerboard, rounder "Mickey Mouse" cutaway horns and black plastic P-90 pickup covers. The rarest feature is the natural finish; this option was quickly discontinued in 1960 in favor of the then-new cherry; less than 300 of these "N" models were made. The factory order number is not discernable in this guitar, but based on the rounder neck shape it was built in later 1959 or the very beginning of 1960.

Although they debuted in 1959 the ES-330 models were not officially offered until the fall. The initial announcement in the October/November '59 GIBSON GAZETTE described them as "Thrilling modern instruments" adding "Double cutaway body and thin silhouette make it wonderfully east to hold and play". They are pitched as replacing the ES-225 series, Gibson's first economy thinlines "within the next few weeks" indicating shipments of the 330's had just gotten underway. Only 79 two-pickup models made it out of Kalamazoo before the end of the year, of which this is likely one; if not, it is one of the first of the final 215 shipped in 1960.

The ES-330 has a classic set of mid-line Gibson features but a distinctive feel. While grouped with the semi-solid 335 range it is actually a very different instrument to play. The slim single-bound body is fully hollow without any center block, making it much lighter than the 335-355 series. This also led to another distinguishing feature of the 330, the neck joining the body farther in at the 16th fret to allow the joint to be stronger.

The neck profile is the rounder "1959 style" that Gibson used right around this time; it is less chunky than some with a round backed feel dressed away more on the sides than many 59s. ES-330s shipped later in 1960 were made with the much flatter '60 profile, which some players are not as fond of. The headstock has a pearl Gibson logo; the tuners are single-unit enclosed Kluson deluxe with plastic buttons.

The two single-coil P-90 pickups are mounted under black plastic dog-ear covers, controlled by the standard Gibson 4-knob one switch wiring rig, with amber plastic bonnet knobs and the "classic" '50s amber switch tip. The sonic balance between the two pickups on this guitar is better than most we have had, with a nice strong signal from the bridge unit.

Early ES-330TDs are great-sounding, extremely versatile guitars and have been heard in many styles of music since the instrument was introduced. Jazz great Grant Green used this model extensively on his most well-regarded early 1960s recordings. Slim Harpo relied on one for his deep swamp blues. The 330 and its nearly identical sister guitar the Epiphone Casino were featured in countless '60s British invasion bands, including the Beatles, Rolling Stones, Kinks, Manfred Mann, and many more. This is a very well-worn but super rare example, one of the few blonde ES-330TDN's we have seen, light and handy with a killer feel and sound, and authentic vibe that can't be beat.

These days it is common to create artificially aged "relic" guitars to assume a veneer of pseudo-authenticity. Well, no artificial relicing on the planet could create this guitar, which has spent thousands of hours inside smoky bars and clubs playing music that likely fed someone (or at least paid their bar tab) for decades. There is wear virtually everywhere, but amazingly not much actual damage or repair. the guitar plays great and remains nearly all original. We generally clean our guitars before putting them out but this one we left pretty much as it came, "ragged but right" with the funk of the ages deeply ingrained.

This goes beyond a "well-played" guitar, it is a true relic showing evidence of long hard use. There is moderately heavy checking overall, and the once clear maple finish has aged to a dark amber hue over the whole guitar. It does not carry a smoky odor, however. The face has no large areas missing, only dings and dents and one spot worn through the typical armwear area. There is some fairly heavy belt-buckle wear through the finish on the back, and rubbed away spots on the edges.

The back of the neck is HEAVILY worn down to the wood between the first and ninth frets; this was PLAYED in, not sanded down. There many worn-over dings and dents in the back of the neck, which actually feels smooth for much of its length except for some finish edges and one small but deep ding behind the 3rd fret. The only repair on the instrument is a long grain check down the center of the neck, neatly and very solidly sealed up and quite inconspicuous now. The headstock shows a lot of wear including light chipping to the corners.

All hardware appears original except the bridge, a later ABR-1 Tune-o-Matic which has been undercut slightly over the wheels to allow it to sit more solidly on the posts. The bridge saddles are also correct style but more recent. There is a decent amount of wear to the nickel plating overall as would be expected, and the plastic pickup cover in the neck position is worn through a bit on the back/top edge. A period Gibson strap button was added at the heel long ago; there are no other alterations.

The guitar has been very neatly refretted with the fingerboard trued and is an excellent player, all the wear does not affect function at all. This is not for the "clean freak" but vintage instruments do not come in any more authentically worn in than this. We don't know its history but whoever played this ES-330 made a LOT of music with it. It came to us from the Detroit area and we like to think the soul is played into this one. The original brown HSC is HEAVILY battered but still amazingly functional; we're glad the original owner shelled out for it and not the cheaper chipboard option, that would be long gone by now! Overall Very Good + Condition.
×