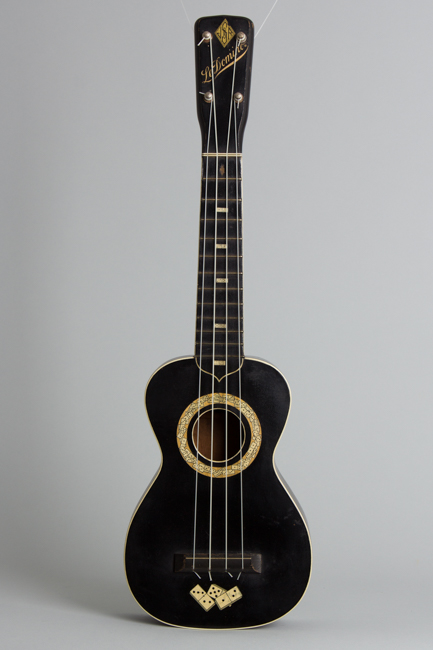 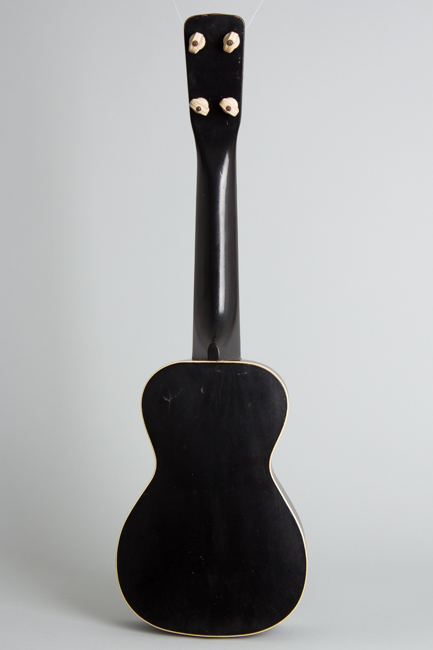 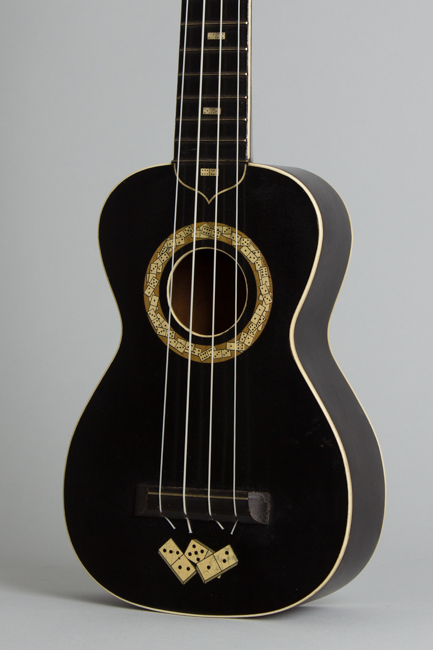 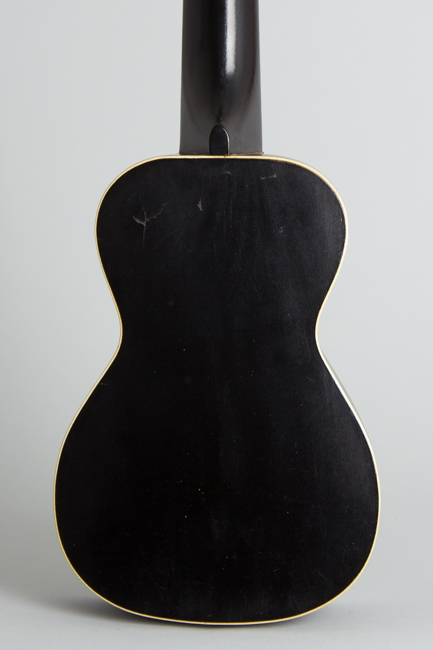 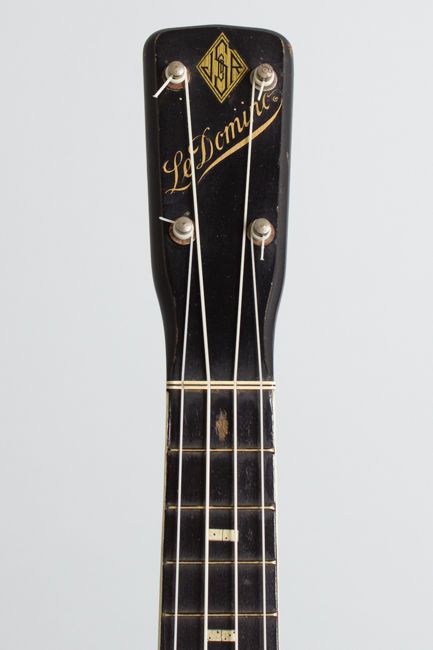 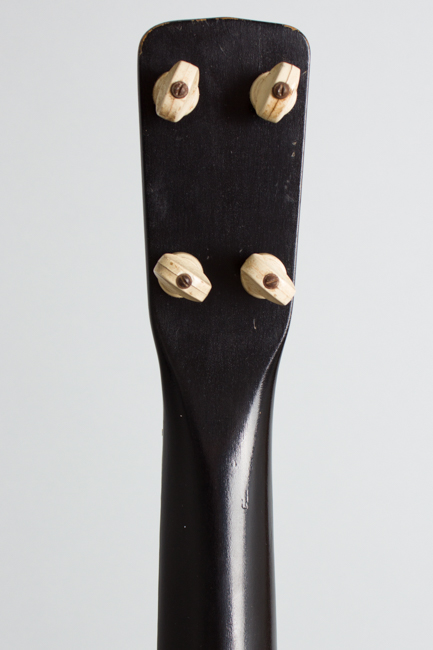 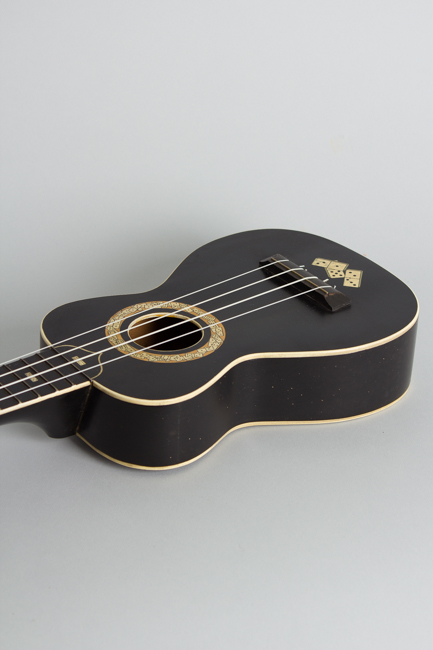 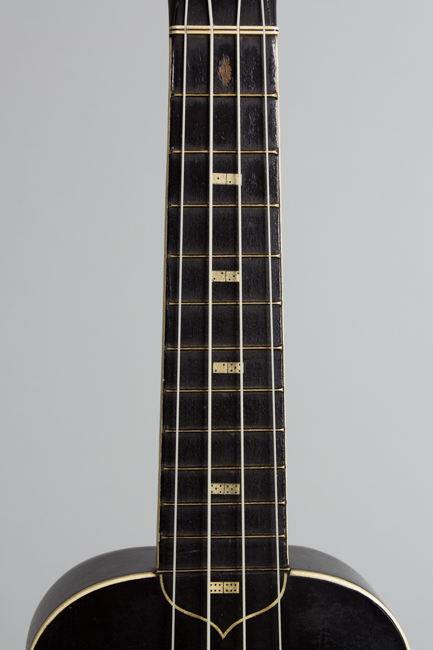 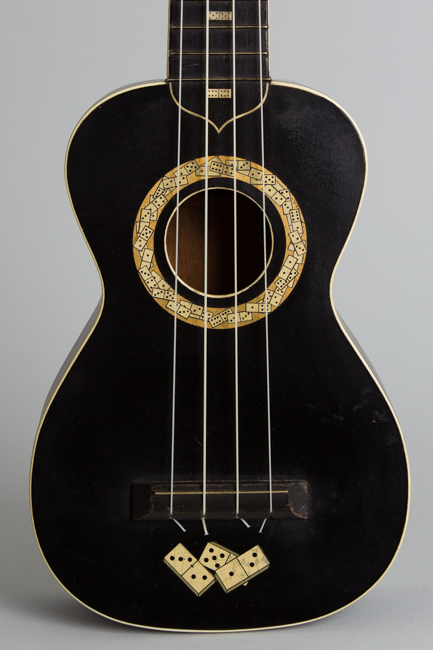 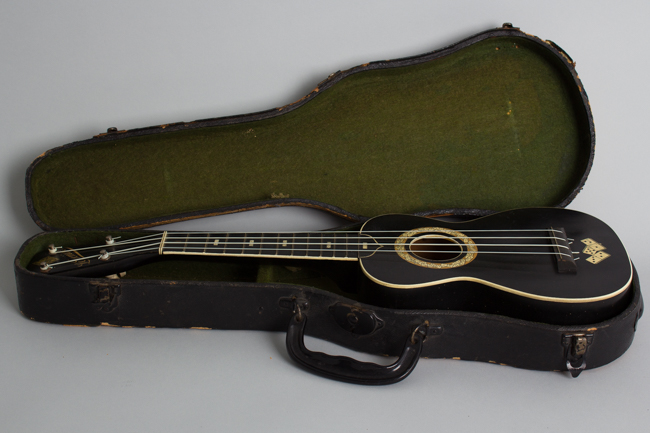 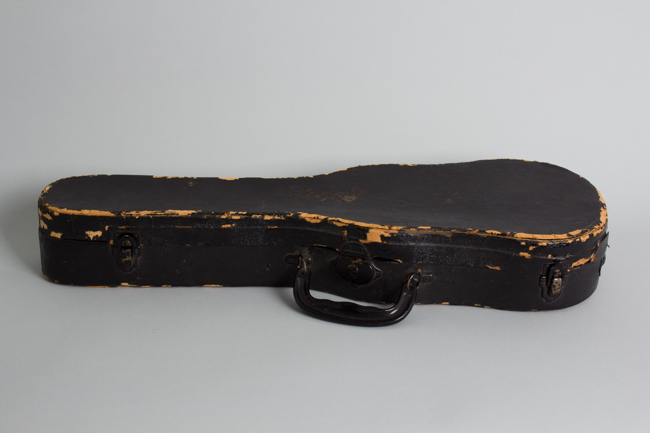 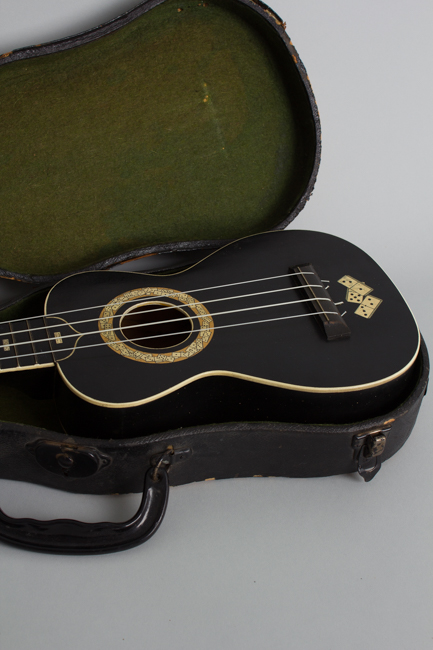 The Le Domino Ukulele is a genuine 1920's classic, one of the more whimsical and distinctive ukes from the instrument's original heyday. The upstart J.R. Stewart company of Chicago built an entire line of Le Domino branded guitars, mandolins, soprano and tenor ukes, and banjo-ukes starting in the mid-late 1920's, and the success of these flashy if fairly low budget instruments quickly made them a major player in the industry. Unfortunately Stewart was quickly forced out of business when the depression hit following a disastrous deal with Lyon & Healy, and the familiar brand passed to Regal in the early 30's. In both incarnations the Le Domino ukuleles were by far the best seller, and it's easy to see why.

This is an original Stewart-made example, signified by the "JRS" monogram on the headstock and somewhat better workmanship overall. Sold at a moderate price, Le Domino instruments are fairly well made (though not to the level of a Martin) and very flashy looking with a black, white, and gold "tuxedo" look. The sleek ebony finish is highlighted by white ivoroid binding on the top, back, and fingerboard. Tiny Domino decals adorn the fingerboard at positions 3, 5, 7, 10 and 12, with the dominoes cleverly numerically designating the position.

A large Domino decal adorns the top below the bridge, and a gold soundhole ring festooned with small dominoes completes the top ornamentation. The headstock carries a gold leaf script "Le Domino", and has a distinctive carved ledge that was a feature of Stewart's ukes that carried over to Regal. The construction is very light compared to many other lower-end period ukes, and while done to a budget these are very neatly made. This superb original example is the nicest we have seen in a long time, and its whimsical charm (and quite good sound) are still evident nearly a century on.

Overall length is 22 in. (55.9 cm.), 6 3/4 in. (17.1 cm.) wide at lower bout, and 2 1/4 in. (5.7 cm.) in depth at side, taken at the end block. Scale length is 14 in. (356 mm.). Width of nut is 1 1/2 in. (38 mm.).
This superbly preserved Le Domino has survived 95 or so years in clean and all original condition with just some small dings and scrapes, with a wear mark to the fingerboard at the first fret and one small repaired impact mark on the upper back. Even the fragile white-button friction pegs are fully intact and work fine. This is a very good playing and sounding uke, and a really snazzy one to boot! It retains its original cheaply made cardboard/thin plywood case, with a lot of external wear and tear but at least it has protected its charge well over the decades. Excellent + Condition.
×