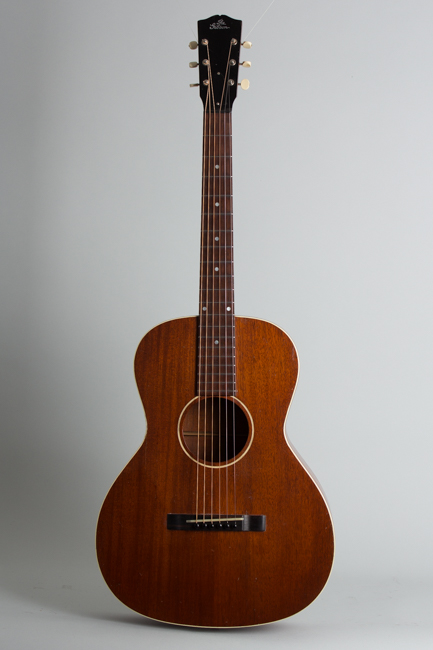 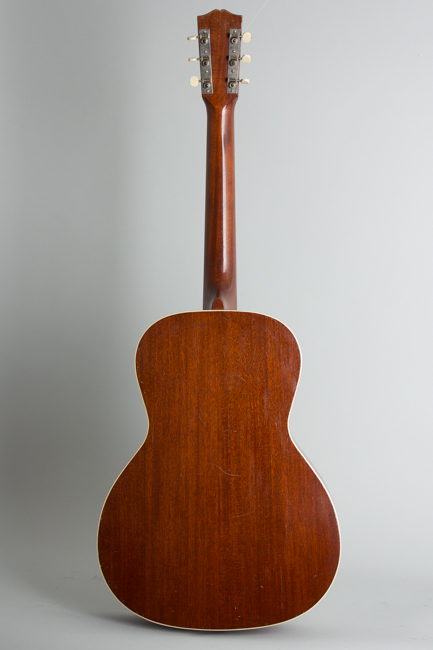 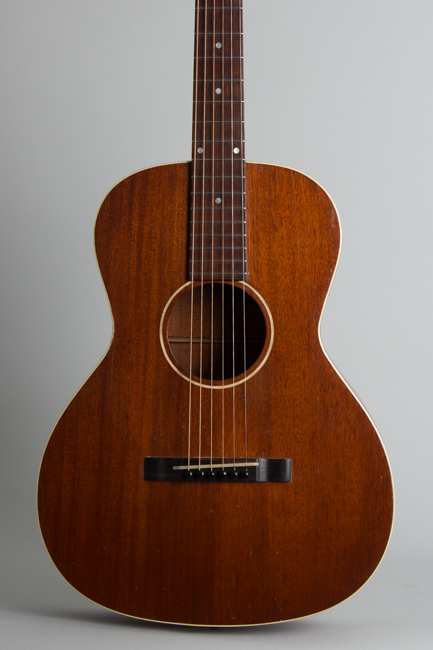 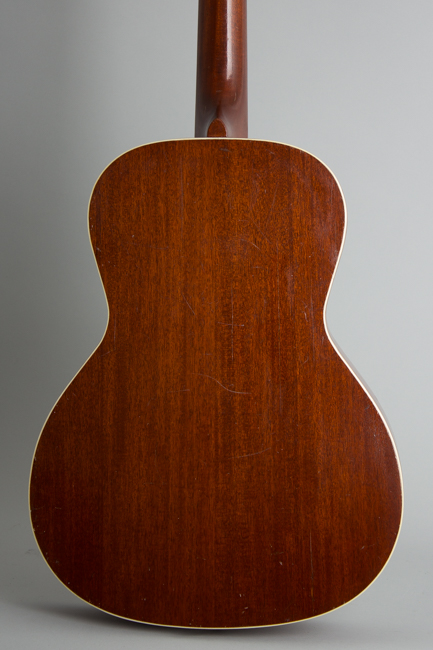 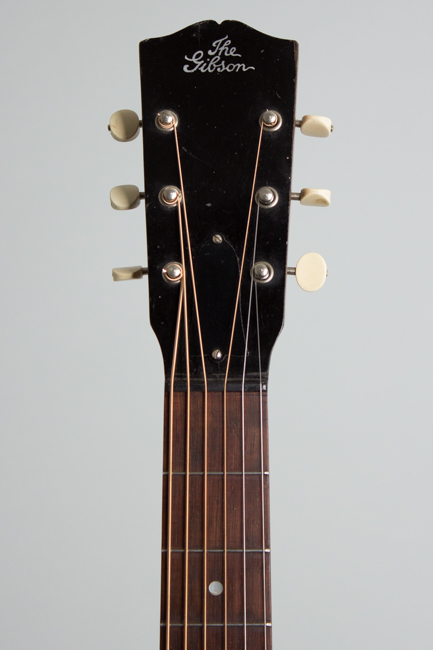 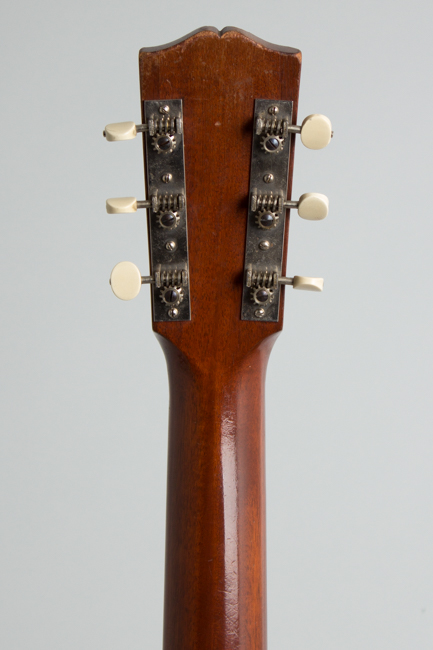 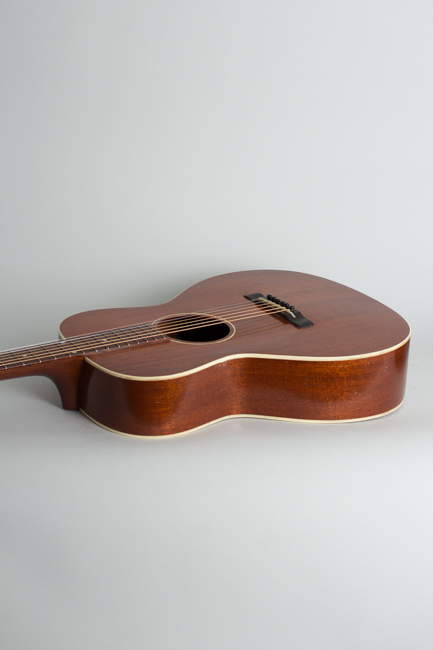 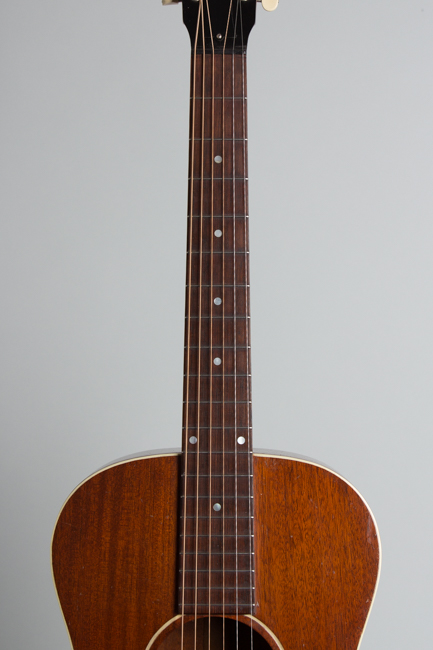 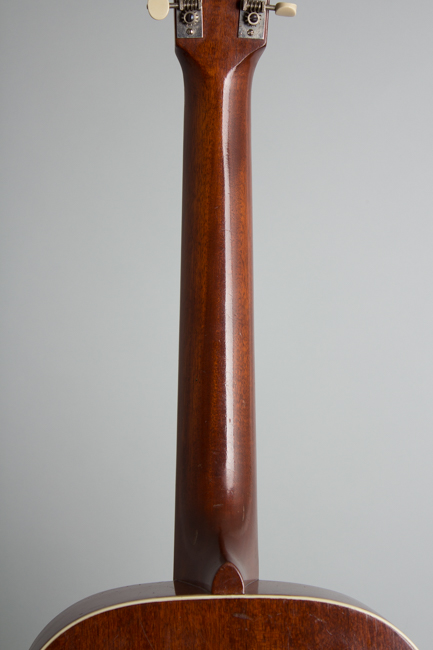 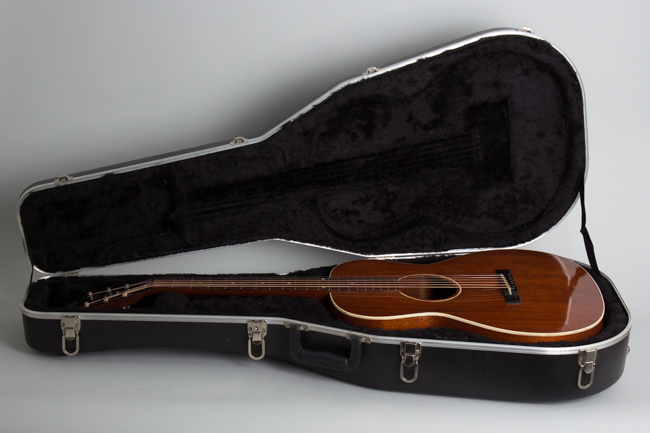 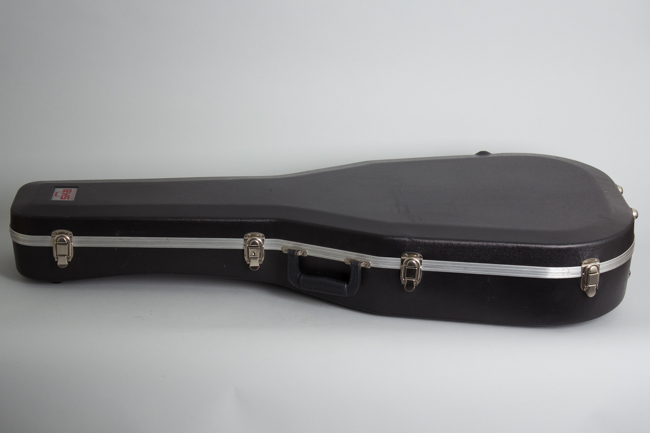 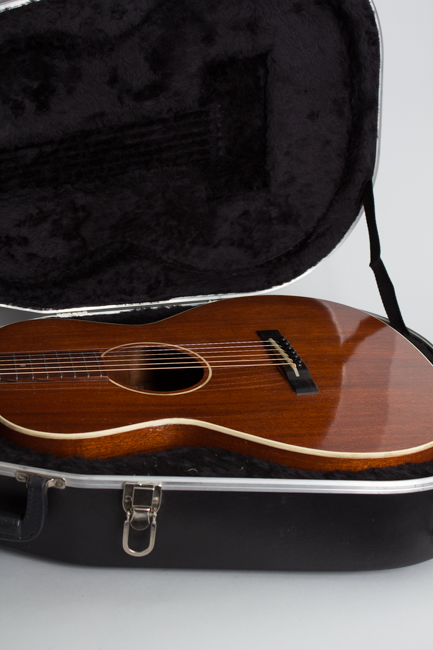 This instrument is a fine playing example of a rare and wonderful Gibson flat-top produced only for a brief period from late 1929 into 1931. This all-mahogany, X-braced L-0 dates to the beginning of 1930 and would be a very early example. It combines features from earlier and later eras into a unique package. The most notable difference from later models is a 12-fret neck joint, a holdover from the 1920s; Both Gibson and Martin would soon adopt a 14-fret design as standard for flat tops. With a clear natural dark mahogany finish and white celluloid accents, this L-0 maintains an austere but elegant 1920s look but is built on the more "modern" larger body of a 1930s flat-top guitar.

The wider, less rounded body shape and X-braced top introduced on these models in 1929 would be subsequently used on the 14-fret L-0 and L-00 throughout the 1930s, but the older thin natural lacquer finish and small silver script "The Gibson" logo were gone by 1932. This neck has a very comfortable and surprisingly slim rounded "C" profile, quite unlike the deeper heavy "V" adopted for these models soon after. This example is a bit meatier than some we have had, with a deeper profile especially as it approaches the body

These earliest 12-fret L-0s also feature exceptionally light construction, even compared to mid-1930s examples. While we are partial to all pre-WWII Gibson flat-tops, we find the L-0 from this year to be an austere but particularly attractive and fabulous-sounding guitar, and an exceptionally responsive instrument. The original list price was all of $35; what can we say but "Those were the days"!

This original L-0 is not pristine but still one of the better preserved of these early Gibson flat top guitars we have seen. These all-mahogany instruments are *very* lightly built and most survivors are heavily worn and/or much rebuilt. This guitar has some well-executed repairs but remains completely intact and an excellent player. The thin lacquer finish has some typical light micro-checking with minor dings, dents, scrapes and general handling wear, but none of the heavy pick marks usually seen on the top. There is some wear off the top edge of the headstock.

The very lightly built X-braced top is very solid, without the bulging behind the bridge that plagues many Gibsons of this era. There are two mahogany grain splits starting near upper waist running back over the upper bass bout, solidly sealed with one cleat added below. There are several long back cracks above center seam, also sealed but not cleated. The small rosewood bridge is an exact repro of the original, with a few spots of visible chip out around it where the old one came up. Internally the top structure is unaltered, including the incredibly slim braces and tiny maple bridgeplate. The neck may have been reset but if so it is one of the cleanest jobs we have ever seen; this is not an east instrument to achieve that on!

The original tuner plates are still shiny with the original composite white buttons, and the tuners still work well. The guitar has been refretted with a relatively close approximation of the original very small wire. It plays sounds fantastic, with more depth than many of these and plenty of volume even when played lightly. Even considering the repair work as early depression-era Gibson flat tops go this is a very nice example, residing in a well-fitted modern molded HSC. Overall Excellent - Condition.
×