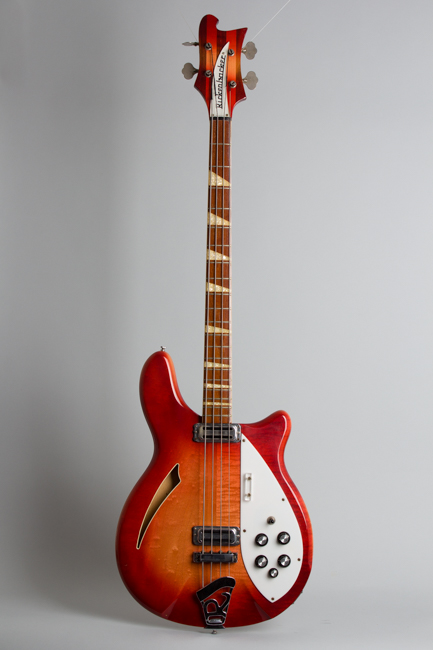 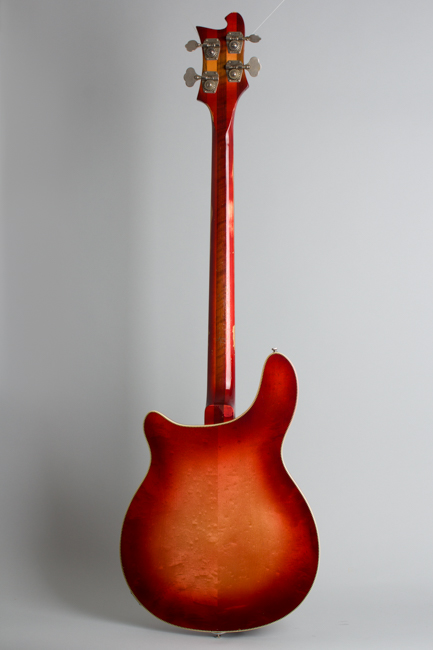 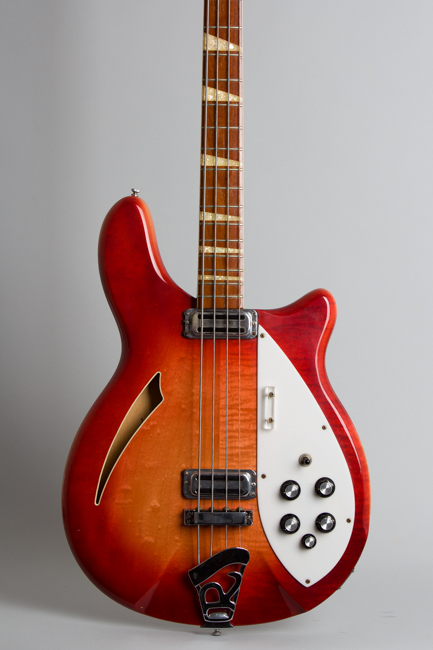 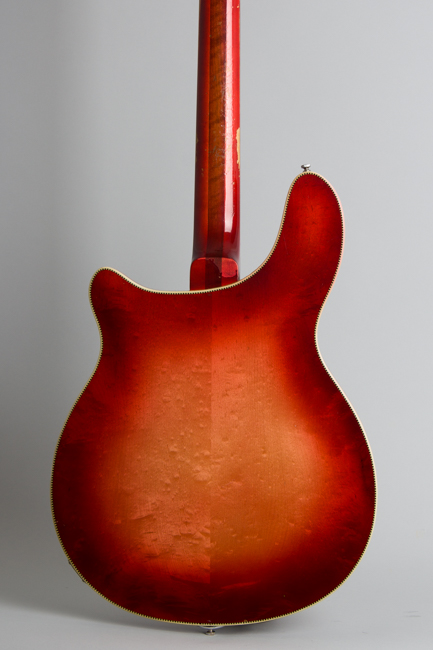 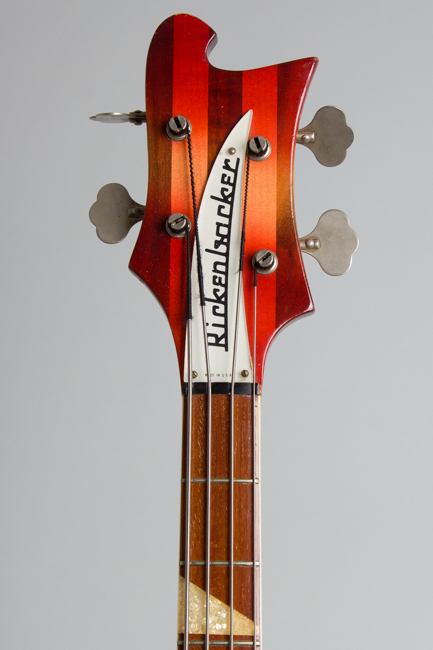 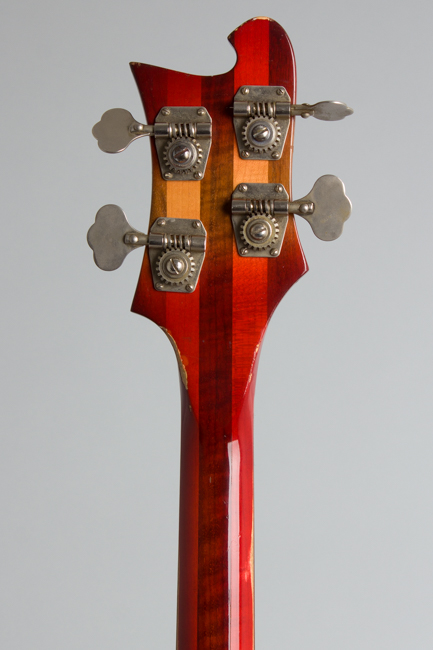 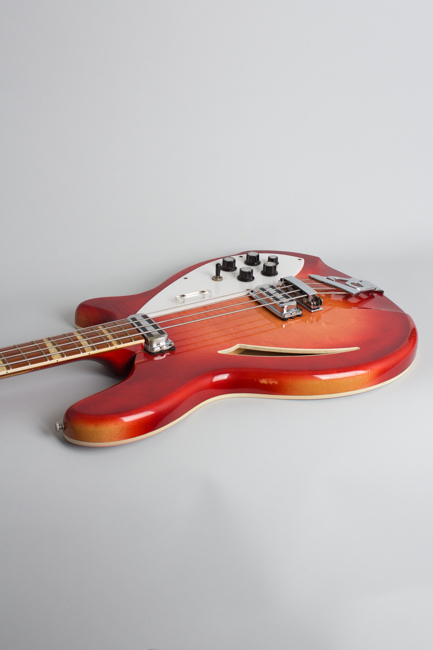 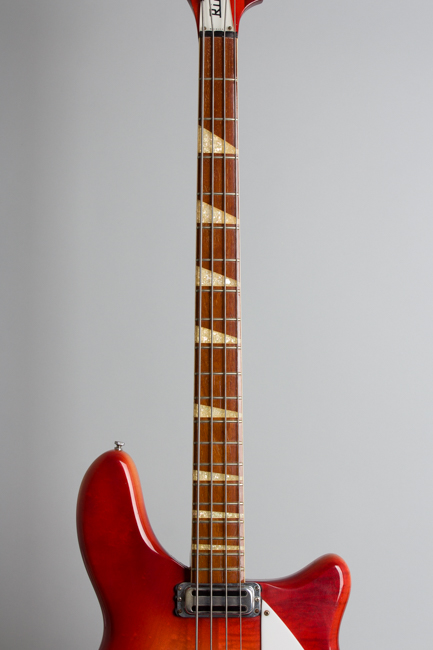 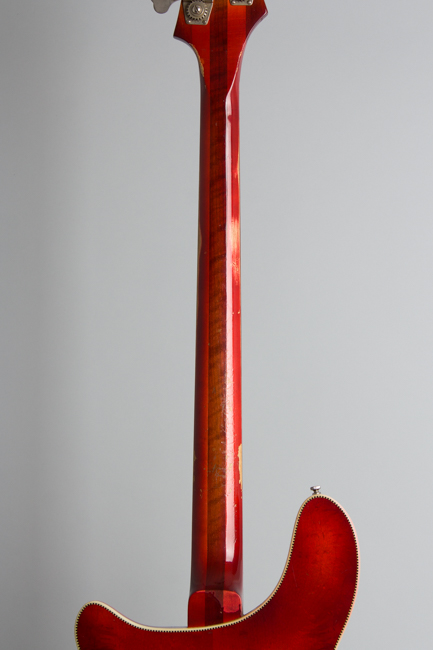 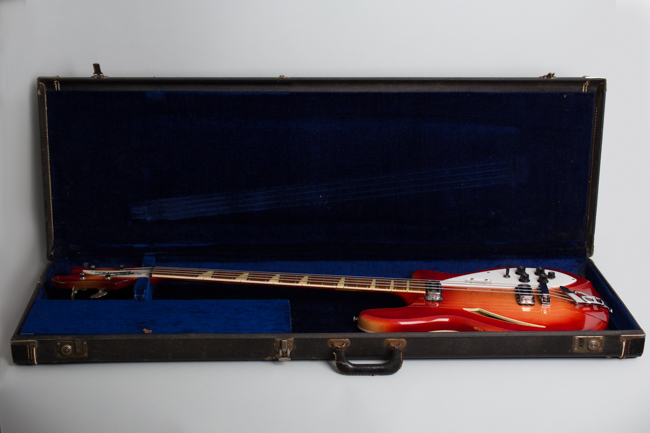 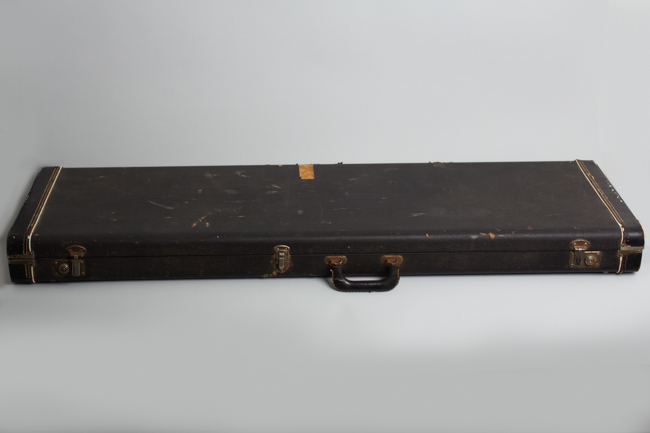 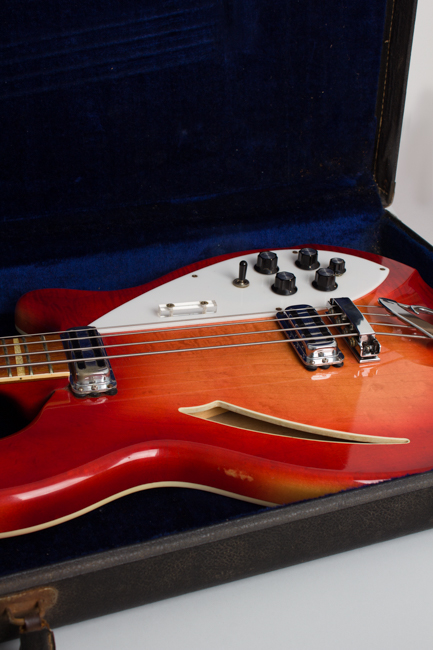 The Model 4005 bass is one of Rickenbacker's less heralded creations, a hollowbody 4-string companion to their extremely popular 300 series guitars that never quite caught on. Nevertheless this is a stunning bass to behold and a great instrument to play, with what seems like miles of unencumbered neck and a sound that can range from deep to very bright with the twist of a knob.

Starting in 1964 Rickenbacker was prodded primarily by Rose-Morris in England to come up with a hollowbody bass, as that was the dominant style preferred by many "beat group" players there. The company's 4000/4001 eventually became hugely popular with UK musicians but in 1964-5 was seen with only a few top pro players. The 4005 was the result, built on a somewhat elongated 360-style guitar body, with a full 33 1/2" scale neck and deluxe inlay like the 4001. The bass was first mentioned in Rickenbacker's summer 1965 price lists, but few were delivered before 1966.

The 4005 has a bevy of unusual features for a hollow body bass, most notably that long very slim neck and the carved solid maple body with a flat back. Essentially it simply combines features from other Rickenbacker instruments; The headstock and neck shapes were carried over from the 4001, the 'toaster-top" pickups and bridge were modified guitar fittings. The bound slash soundhole and checkerboard binding on the back were identical to the Model 360 guitar. Most other hollow body basses are short 30" scale instruments; Rickenbacker went a step farther in creating this unusual full-scale model in 1965.

The two pickups are very widely spaced, controlled by the standard 5-knob Rickenbacker rig including the fifth "blend" knob that actually is quite useful on this bass. Despite the deluxe trim the 4005 is wired in mono, with no "Rick-O-Sound" stereo. The rich red fireglo sunburst has a lovely effect over some flamey maple (oddly enough mostly on the bottom half of the body) and the crushed pearl inlay adds a glam touch.

Despite a great sound and imposing looks the 4005 never really caught on. Production of all Rickenbacker basses was limited in the '60s, and this model was no exception. One reason was the cost; in 1968 the list price was $510, plus $70 for the case. A Fender Jazz bass was more than $200 cheaper! Various finish and trim options were tried on the 4005 but despite later high-profile sightings with Steppenwolf (Rick endorsers after all) and the Who (in the studio around 1970) the 4005 did not benefit from the huge uptick in Rickenbacker bass success in the late 60s and mostly 1970s.

Today these unique and rare basses have a dedicated cult following among adventurous bassists. Their totally unique feel and sound has never been duplicated and original 60s examples are considered the cream of the crop. This 1968 4005 shows some wear but plays perfectly; it can sound monstrous when pushed at high volume but also offers a delicately flavored semi-acoustic timbre at lower volumes.

This bass remains beautifully original with some generally light wear with some very fine checking on the body, dings and dents here and there and most noticeably rub wear on the sides of the neck in the middle area and some dings, dents and chips higher up in the 9-15th fret area. It looks like someone perhaps used to stash their cable and/or strap in this area in the case, and something caused this wear pattern. It is not super distracting when playing, but can be felt. Some of the overcoat has flaked off the back of the heel and the headstock edges have some wear as well.

Apart from these cosmetic points this is structurally an extremely fine example, with none of the neck joint/truss rod issues than can plague this model. The neck joint is completely solid and the typical fingerboard separation issue (almost ubiquitous on 1960s Rick basses) is confined to a tiny check under the nut on the bass side. The neck is dead straight with light flat wound strings. For intonation's sake the original bridge was moved back exactly 1/4" from the factory position allowing this bass to actually play in tune, something not always true of 4005s. The screws holding two of the tuner gears are chrome instead of nickel, these were likely replaced long ago.

This is a superb playing example of this rare and somewhat eccentric bass, not the absolutely cleanest but the best playing and solidest we have seen. It has a wide sonic range and very distinctive character, a truly unique creation. It is housed in the first generation blue-lined black Rickenbacker case (just replacing the silver in 1968-9) which is a bit battered but functional. Overall Excellent - Condition.
×