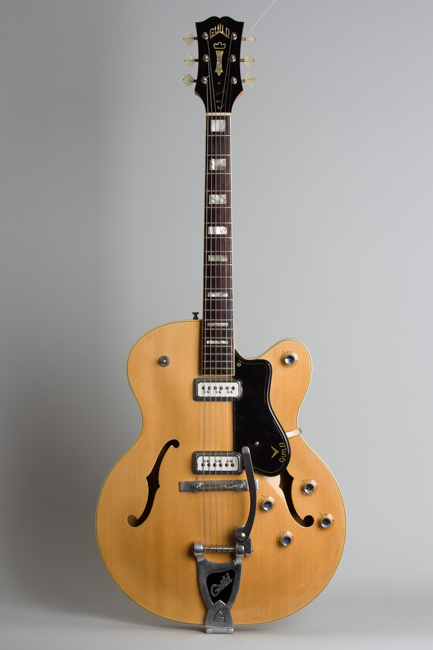 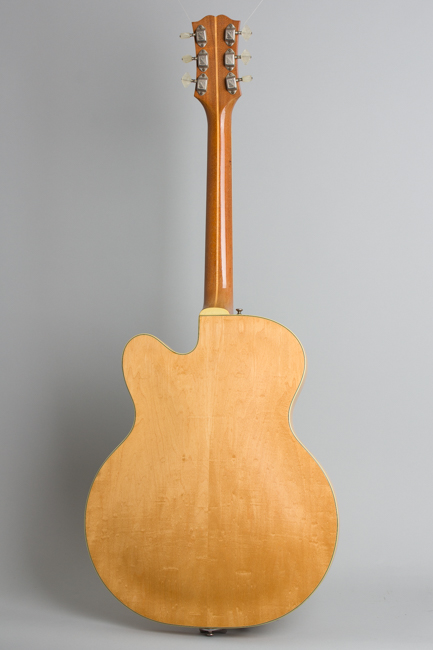 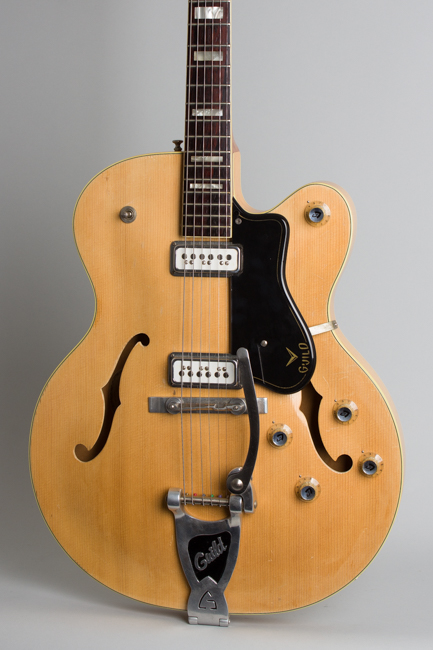 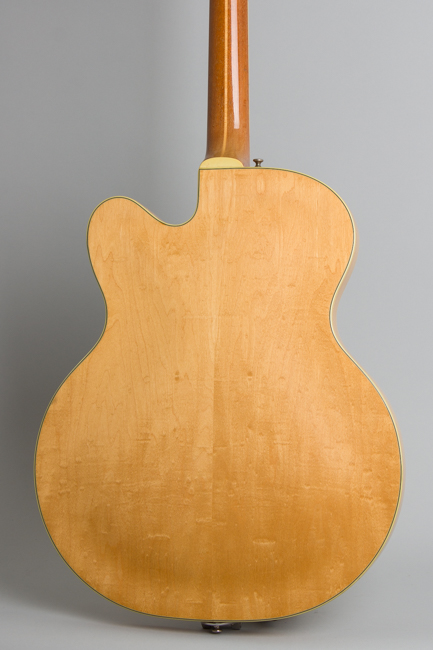 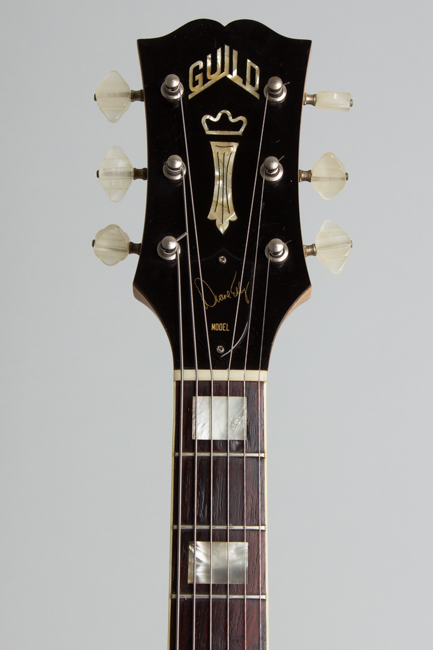 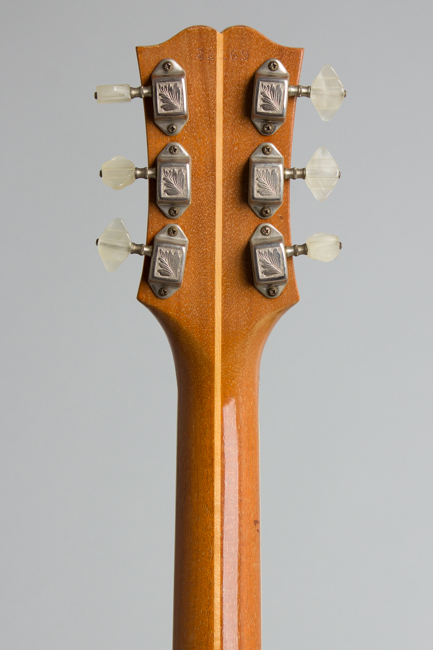 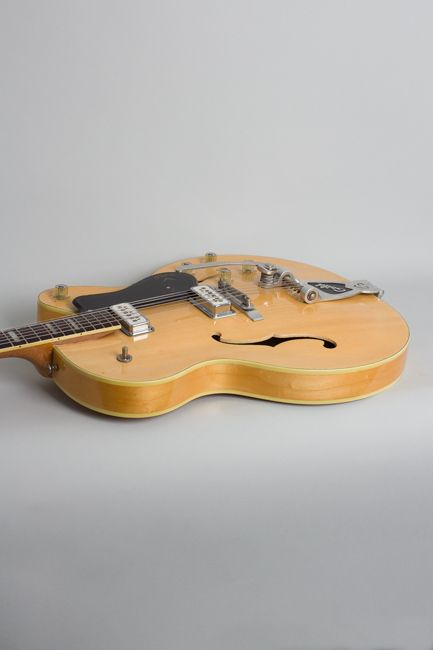 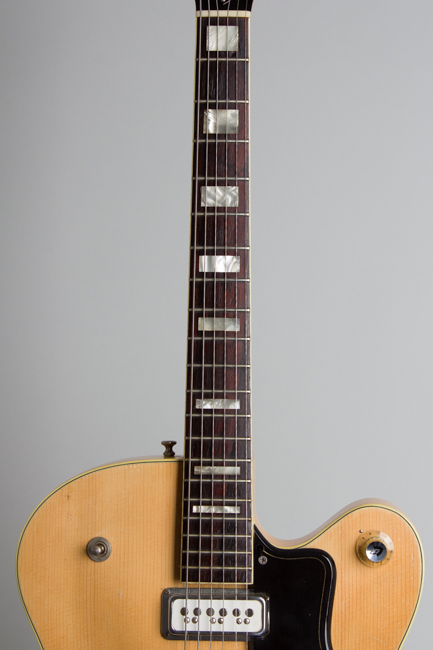 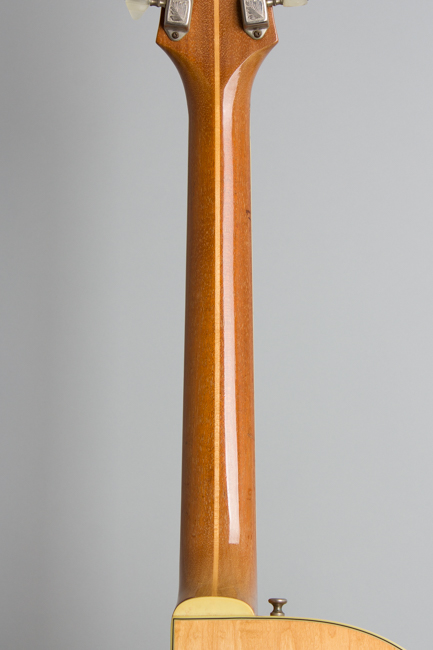 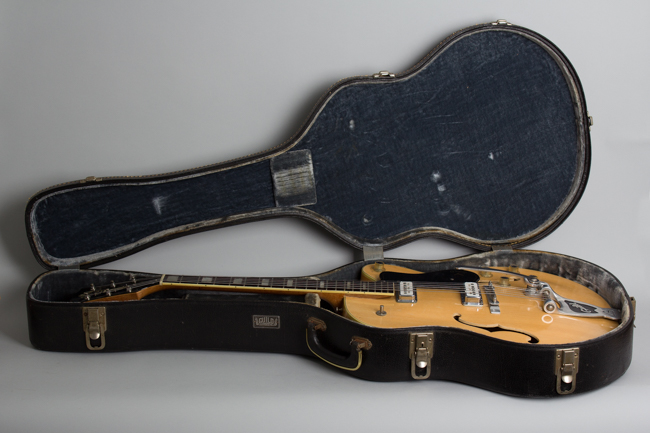 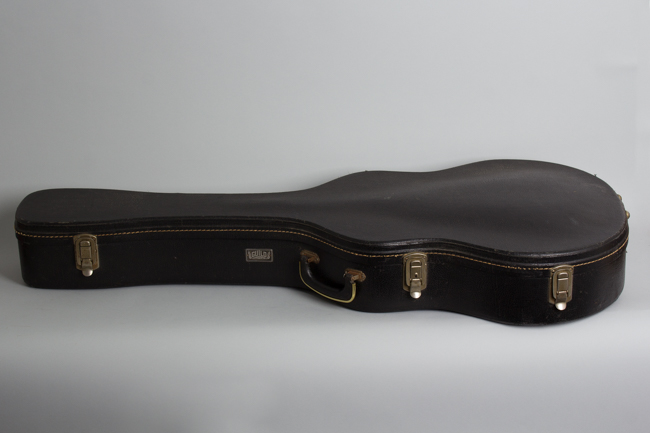 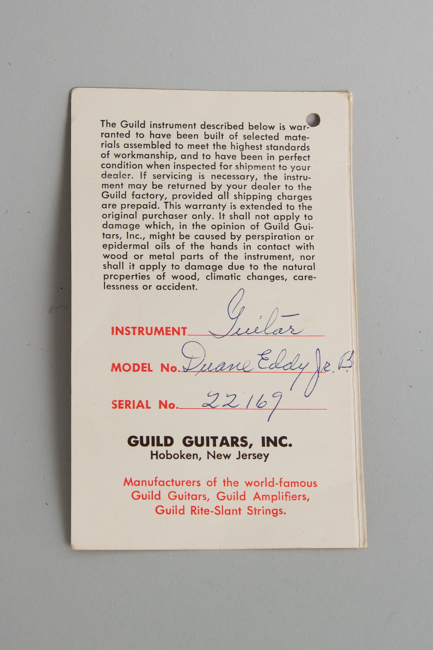 This is an extremely rare example of one of Guild's very best 1960's guitars, the model briefly called the "Duane Eddy Junior" before settling in as the DE-400. There may be only one batch of these "Junior" models, all built in late 1962 for a 1963 launch; the few that have surfaced have serial numbers in a closely related batch. It may have seemed odd to call this a "Junior' model as it was a full-sized guitar with professional features; at any rate the designation was dropped almost immediately.

By any name the DE-400 Duane Eddy is one of Guild's less common 1960s offerings, a serious professional-grade guitar with most of the design features of the highly sought-after DE-500 signature model at a somewhat lower price. The Duane Eddy models were inaugurated by Guild in late 1962 as they jumped at the chance to catch the endorsement by the top-selling instrumental artist of the time. The original Duane Eddy signature model was the DE-500, a very high-end thin line hollow-body based on Guild's T-500 but adding DeArmond pickups, a Biggby vibrato and a master volume knob on the cutaway, all features Duane Eddy specified from his Gretsch 6120.

This "Jr" or shortly DE-400 was quickly added to the line as a more affordable option with the same construction features but less fancy cosmetics, as the rock and roll target audience (i.e. teenagers) were likely not able to pony up in sufficient numbers for Duane's original signature model. Both the DE-500 and DE-400 are among Guild's most highly regarded electric guitars today; they were expensive compared to many similar instruments of the early 1960s, and despite being excellent, practical designs were not good sellers at the time.

This guitar is built on a thin line 17" single-cutaway body, and has all the more desirable features of the model's first incarnation. It is finished in natural like Duane's personal DE-500 in natural, which makes for the most desirable variant; most "Jr's" that have surfaced from this first batch are sunburst. The body is made of laminated maple with a laminated spruce top and is triple-bound top and back. Many subsequent DE-400s had a laminated maple top contrary to the stated original spec. so this is another rare feature. The pickups are white-top DeArmonds, as originally specified by Duane Eddy but replaced soon after by the company's own humbuckers, which changed the characteristic sound dramatically.

The tailpiece is the standard Guild Bigsby unit paired with the aluminum Bigsby adjustable bridge. The bound mahogany neck has a block-inlaid rosewood fingerboard and the headstock has the standard 1960s Guild plastic overlay with "Chesterfield" column inlay, with Duane Eddy's name on the truss rod cover -- another feature soon deleted. The tuners are the lovely Kolb units with diamond-shaped plastic buttons, used in this period only on higher-end Guild models.

This is simply a wonderful sounding and playing guitar with a slightly livelier acoustic sound than the more familiar Starfires due to the larger body and spruce top; it offers a truly great electric sound, similar to a 1950s Gretsch in character but with its own edge. This is quite a versatile instrument, excellent for everything from jazz to country to garage-band rock -- and, of course, Duane Eddy songs! An excellent player and a very rare, cool and fancy 1960s vintage hollow body guitar.

This is a truly excellent example, remaining very original and appearing not too much used as it approaches its 60th birthday. The original thin clear lacquer finish has very light checking and some scratches, small dings, dents and spots of wear mostly on the top. The guitar is all original except possibly the back-painted clear plastic pickguard, which MAY be from another period guitar, as a small screw hole at the front tip was cleanly filled. The guard does not bear the Duane Eddy signature, but many of the earliest DE-500s also do not, so it's hard to be 100% sure. The Hoboken Guild factory was notoriously inconsistent and would often use whatever was handy to complete an instrument!

This guitar has an excellent neck angle and is a very fine player; many period Guilds have issues in this area. The frets and fingerboard show only very light wear. With two powerful and snappy DeArmonds up close under the strings this is a very fine sounding guitar, a very cool and extremely rare example of one of Guild's all-time best designs. It resides in the original deep-bodies case (Guild issued all the early thinline DE's in full depth cases) with the original serial-number marked hangtag still in the pocket. This is simply one of the finest vintage Guild instruments we have handled, a truly special guitar! Overall Excellent Condition.
×