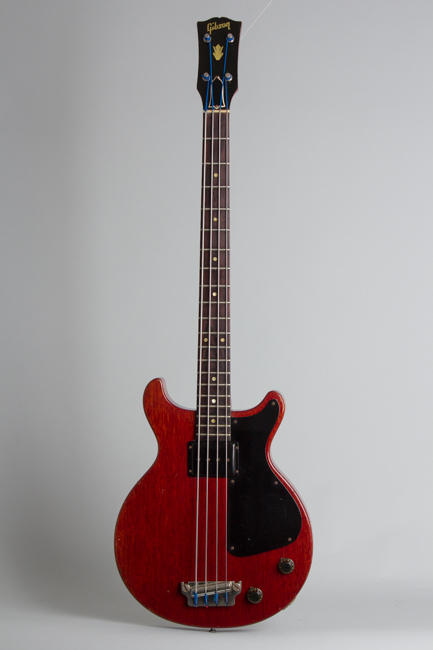 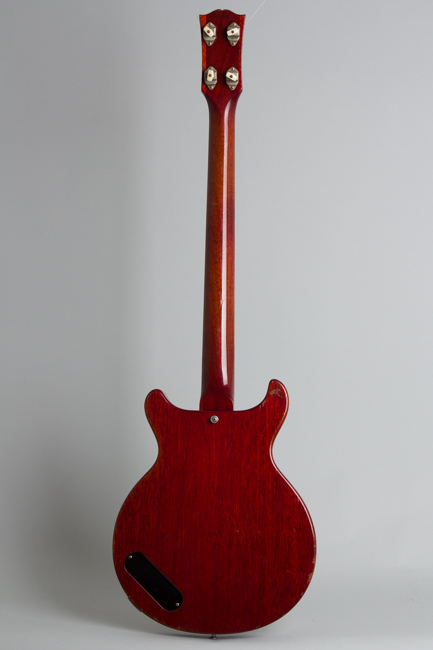 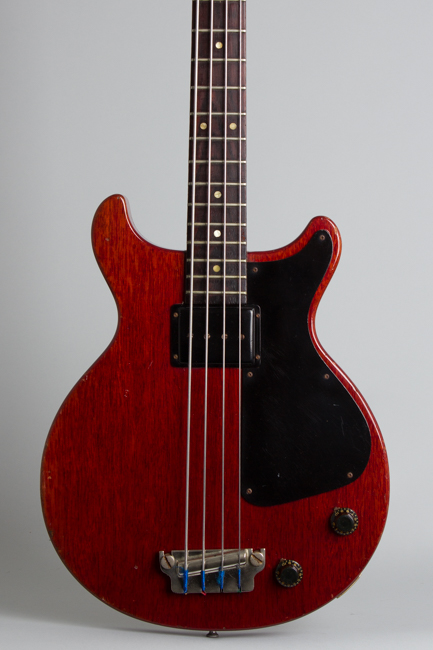 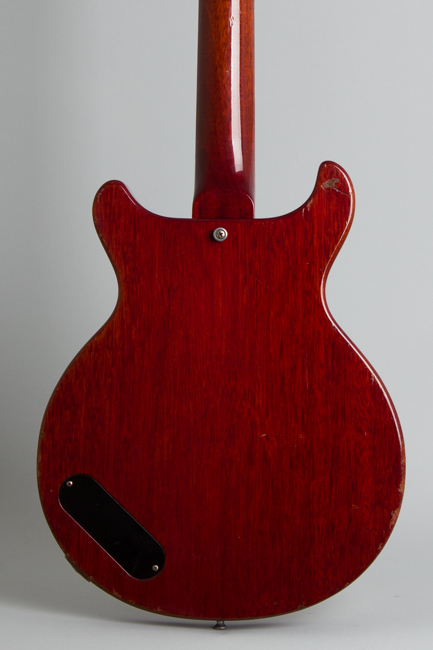 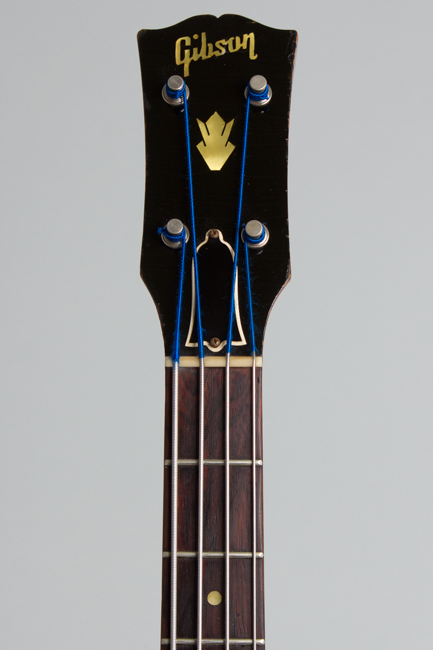 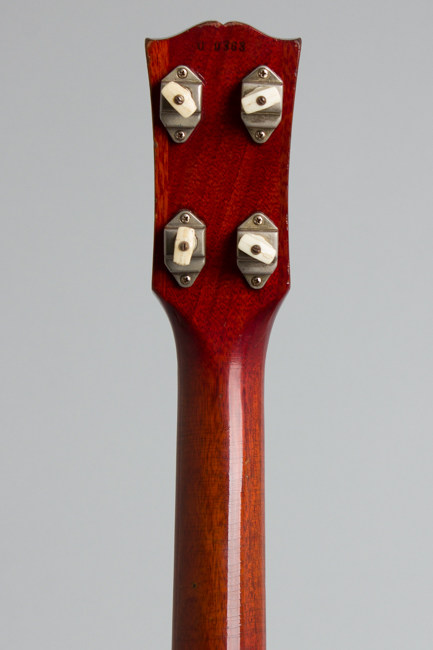 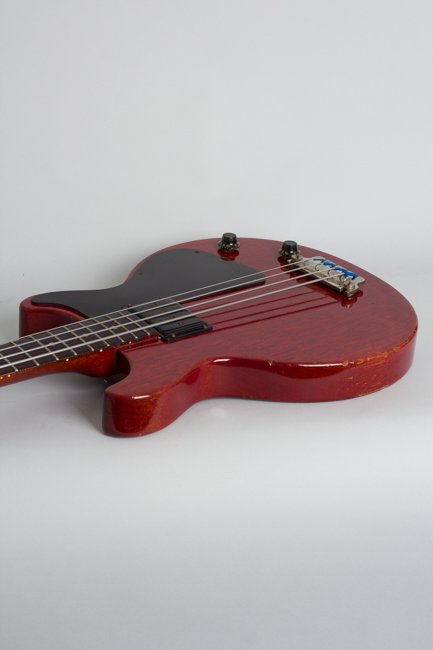 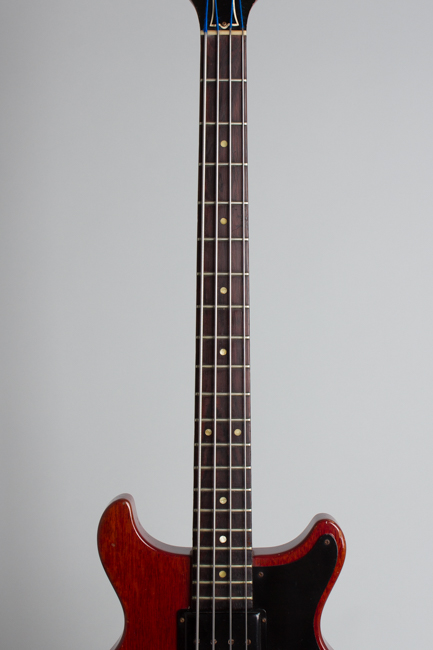 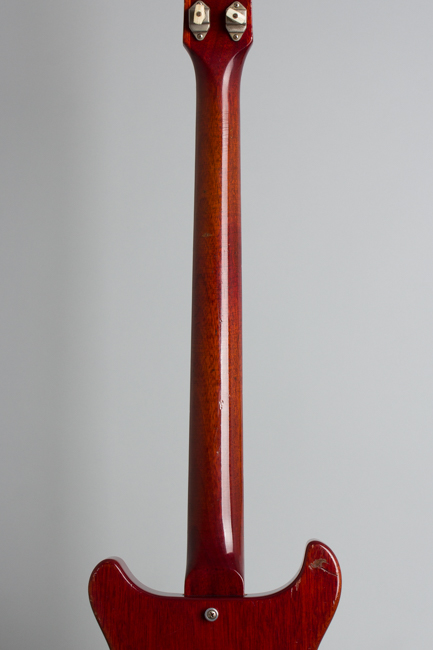 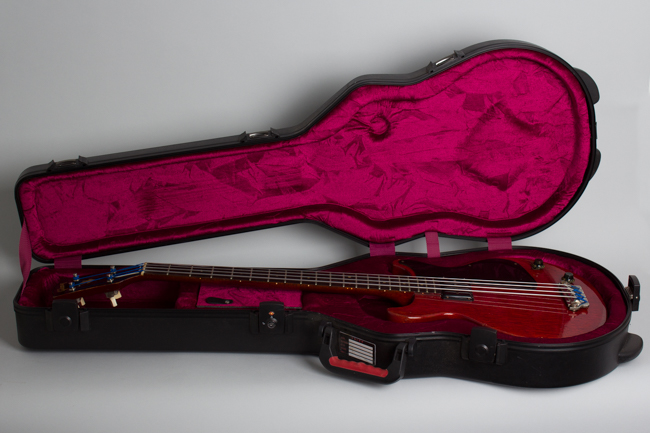 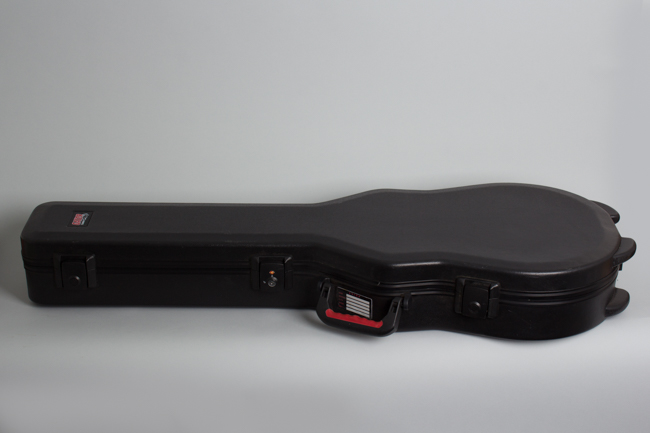 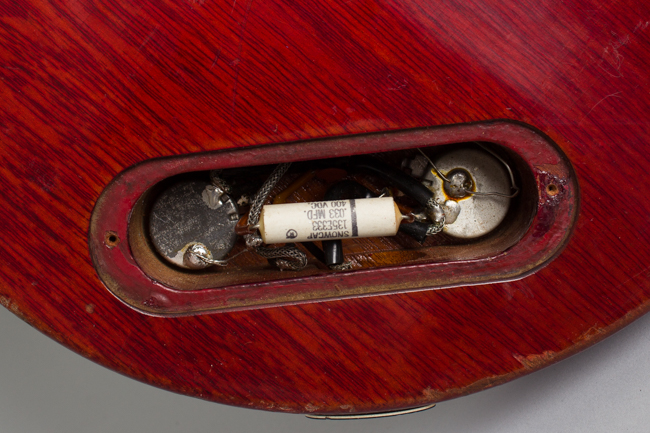 This first version of the Gibson EB-0 bass is a fairly rare instrument, as only about 500 of this initial slab-body variant were sold from 1959 into early 1961. This particular example has a very low 1960 serial number and was produced right at the beginning of the model's second year. 1960 represented the sales peak for the original EB-0, but the shipping totals show a paltry 342 instruments leaving Kalamazoo that year, so there are not a lot of these basses out there! The subsequent SG-bodied version is, of course, a comparatively common find.

The EB-0 was Gibson's first "popularly priced" bass, listing on introduction at $195 and completely replacing the more elaborate and expensive violin-body EB-1. The new "0" used the cherry finish, double-cutaway slab mahogany body recently developed for the Les Paul Junior, mated to the 30" scale bass neck and hardware continued from the EB-1. Some logically refer to these as "Les Paul Jr. Basses", but they were technically never part of that signature line.

The features include the earliest version of Gibson's infamous 12,000 turn bass humbucking pickup with a black Royalite cover, hovering over a large black single-ply pickguard covering the lower half of the body. The nickel-plated one-piece metal bridge at the bottom end of the body is adjustable for height and overall intonation, and this primal model is devoid of the clutter of a central handrest, finger "tug bar" and bridge mute unit added to its SG-bodied descendant.

The headstock carries the plastic-button Kluson banjo tuners Gibson inexplicably preferred for bass use up into late 1960, with a pearl Gibson logo and crown inlay. The round-backed mahogany neck is typical 1959 Gibson fare, a bit chunkier than the generally flatter 1960s versions and very comfortable to play. The sound is typically huge and booming, centered on the lower end of the tone spectrum with a massive overdrive potential through older-style tube amps: think Felix Pappalardi, Jack Bruce et. al. This is an exceptionally ergonomic bass, extremely compact with a simple layout and no wasted space! While the sonic palette is very specific, this is a great-playing and far superior-feeling bass to the many later 1960s and '70s Ebs far more commonly found.

This is a nice if somewhat played-in all-original example overall, showing a decent amount of general wear but no major damage or alterations. There are dings, dents and scrapes to the finish, mostly along the body and headstock edges. There is one deep gouge on the back of the upper body horn. The cherry red lacquer has faded less than many, retaining good color with some typical fade on the back of the neck. It has checked lightly but has no major areas of loss.

The sometimes fragile plastic-button banjo tuners are still present and working,; they appear to match exactly but one tunes in the opposite direction from the rest so is either a replacement or quite possible factory error; there is no sign of it having been changed. The rest of the hardware is all stock original including the giant "mudbucking" black-plastic covered pickup, wiring, knobs, bridge, and pickguard -- even the usually broken plastic jackplate is still intact.

The bass plays nicely, with almost no fret wear (the frets appear to have been crowned long ago leaving some fingerboard scars) and a very straight neck. The sound is BIG and dark with very little high end. If you are looking for the ultimate monster Gibson miles-deep bass rumble, this has it in spades -- and is actually much more versatile through modern amps than period ones. A modern molded HSC is included. Overall Excellent - Condition.
×