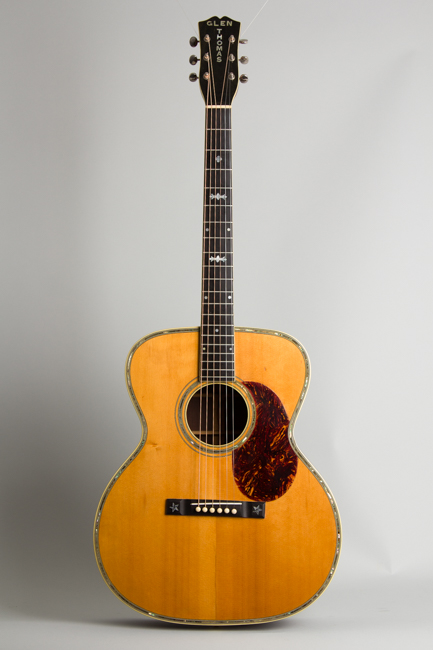 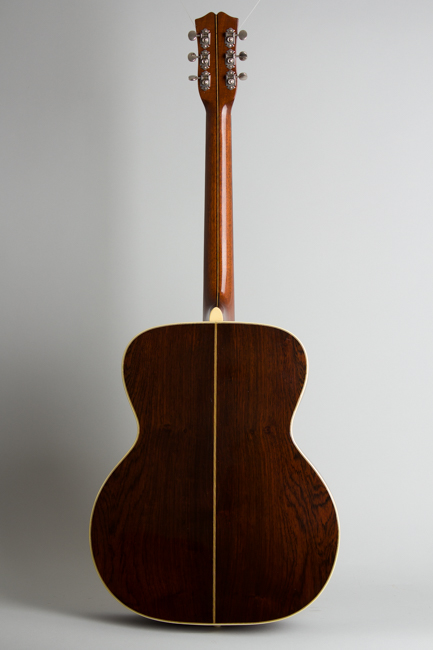 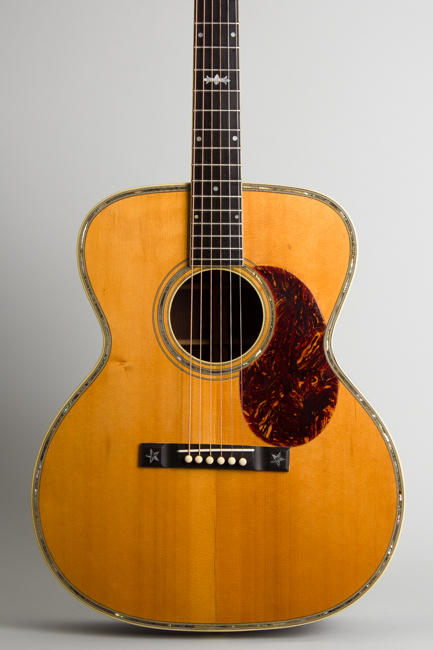 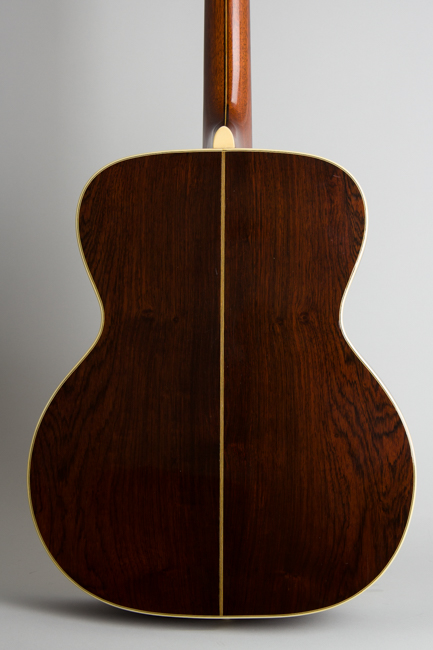 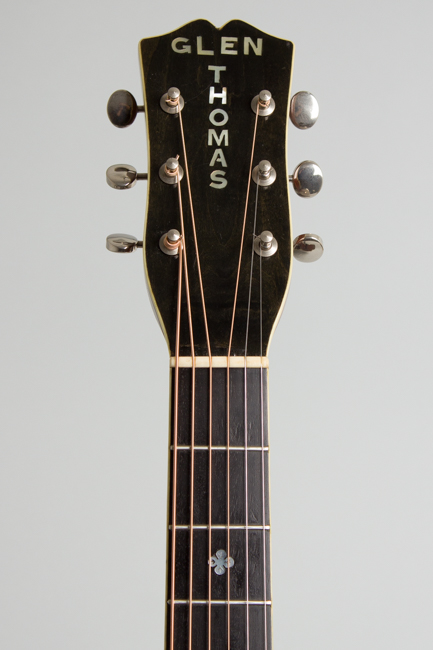 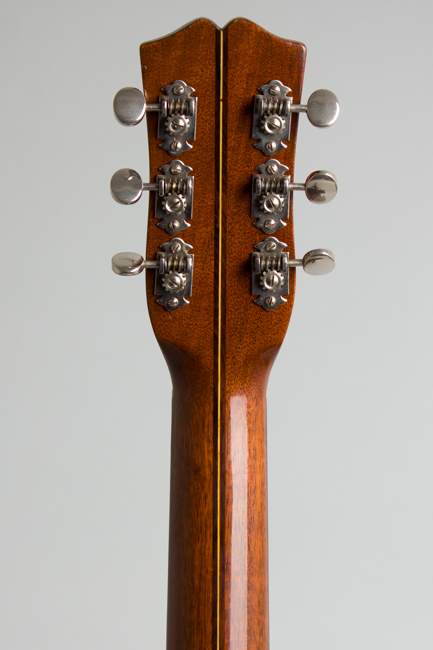 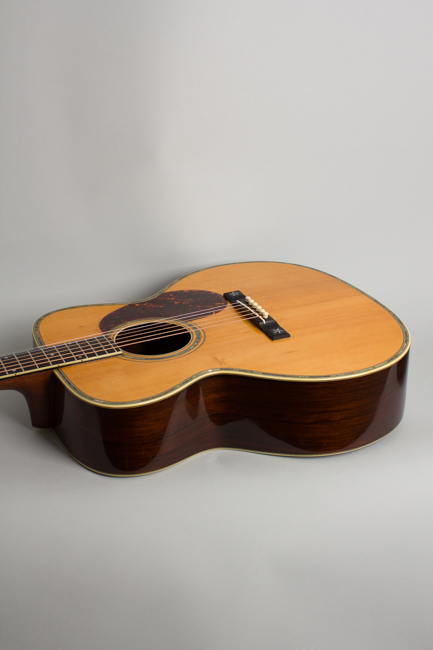 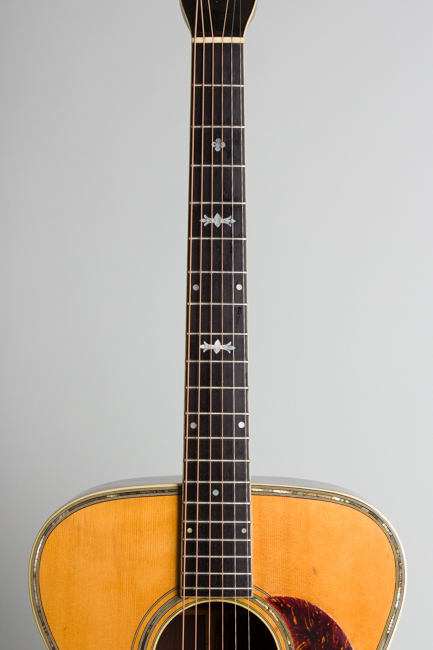 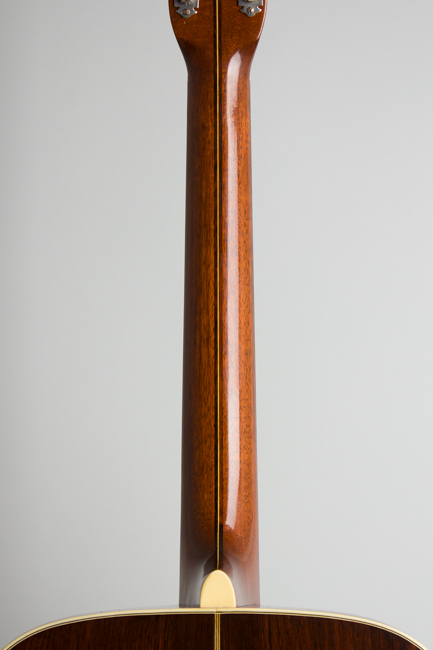 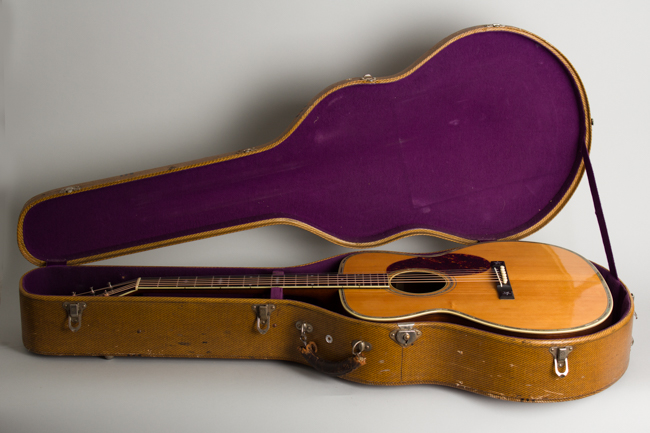 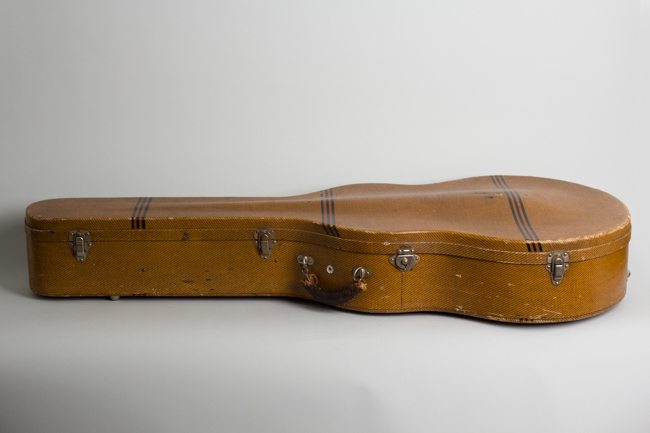 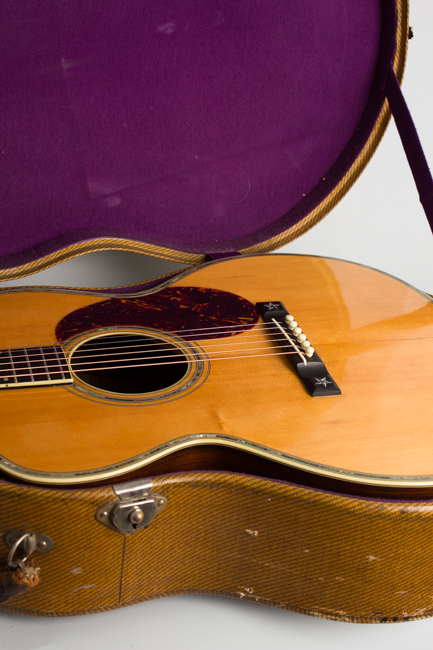 Any discussion of the finest flat-top guitars ever made will eventually come around to the work of Carl and August Larson. From the very beginning of the 20th century up until WWII, the Larsons' small Chicago workshop turned out a dizzying assortment of beautifully crafted fretted instruments -- guitars, mandolins, the occasional ukulele, and even harp guitars. The catch is, the Larsons never put their own name on them. Much of their output was contracted to sell under other brands, with guitars labeled "Maurer" sold by themselves.

This is one of the cleanest surviving 1930s Larson Brothers instruments we have seen, showing some light added finish but beyond that nicely original. It is a true gem of a pre-war rosewood Jumbo and fantastic instrument for any era. This super fancy 16" Jumbo has "Euphonon" branded on the backstrip, the final trade name the brothers coined. August and Carl began using this trademark in the 1930s, and the majority of guitars so branded show "modern" features: a 14-fret neck joint, slimmer neck, solid, non-slotted peghead, and often large bodies. All Larson instruments were handmade, but in this era each one is a unique creation. In the 1930s the brothers' Elm street location functioned (in modern terms) as a custom shop, building one-offs for direct sale to the customer.

Anyone could go to the Larson shop at 536 Elm Street in Chicago to order an instrument. August Larson is even remembered as saying "you already have a guitar...why do you need another?" In the 1930s many local entertainers felt they needed bigger, flashier ones. The Larsons were at the time the only major individual builder specializing in the fancy flat-tops preferred by "Hillbilly" singers many of whom were professional (or at least semi-pro) entertainers in the Chicago area. This guitar was built for Glen Thomas, Chicago radio station artist reputedly on the WLS National Barn dance, although not much other evidence of this survives. The instrument dates to around 1937-8, and bears Thomas' name inlaid in pearl on the headstock in a T-pattern.

This is a very fancy guitar, even by the Larson's standards, with the top grade of materials and decoration. The spruce top has the laminated X-bracing and subtly arched "built under tension" design the brothers developed 30+ years before. This proved ideally suited to large-bodied designs; the laminated braces make the top stronger without unduly heavy construction. The guitars of this period showcase the structural and tonal advantages of August's innovations; by the late 1930s the brothers had been building guitars for around 40 years.

The look is flashy as all get-out; the top and soundhole are bordered with multiple celluloid layers on either side, with a side binding line as well. The trim includes lavish colorful abalone strips inlaid along the sound hole and top edges, a personalized bound headstock, and engraved shaped pearl inlay in the bound fingerboard. The tortoise celluloid pickguard is smaller than on some of these, in a slightly enlarged Martin pattern instead of covering the entire bout. The back and sides are beautiful Brazilian rosewood and the top very fine-grained spruce, albeit with a noticeable grain spot near the top waist. The neck is laminated mahogany with a thick ebony fingerboard and a slim, modern-feeling profile compared to many period instruments.

These later period large body Larson guitars with 14-fret necks are generally considered by modern players the cream of the Larson crop. The built-under-tension construction helps create a quick response and bright, ringing tone with strong sustain even in a large guitar. Many consider the 16" Euphonons the finest-sounding of all Larson instruments; indeed, some of the best steel-string guitars ever made. This fabulous pre-WWII jumbo is certainly a contender, a fantastic survivor from the golden age of "Hillbilly" radio and the guitars that powered it!

This guitar remains in cleaner and more original condition than most extant large-body Larsons, with some light repair but substantially intact as the brothers originally built it. There is a thin clear lacquer overfinish over pretty much the entire instrument, most noticeable on the back, back of the neck and headstock. Fortunately the top appears to have the least added finish, it is very thin and the original patina is still visible. This work looks to have been done quite some time ago; there is one case-lid ding ahead of the pickguard that must happened later but not much other subsequent wear.

The overspray is most noticeable on the back, which has one small crack repair off the upper edge may be the reason for the work in the first place ("back in the day" some people would add finish to an entire instrument whenever a repair was done!). The top center seam was re-sealed, solidly but visible with an old piece of bias tape underneath at the back end. The back of the neck has a more noticeable overfinish as well, but it is not too heavy or 'sticky' feeling as some can be.

The bridge appears to be a correctly done replacement, in the exact Larson style with the original star inlay on the ends re-installed. The original bridgepins are present -- rarely the case after 80+ years! The thin maple bridgeplate has not been altered. The neck does not appear to have been reset or refretted, the original small wire frets have had some recent re-crowning and are in excellent shape. The tuners are the original open-back Waverly units with metal buttons and round grommets.

Even considering the finish work this is one of the finest surviving Larson WLS guitars we have seen, with far less use and repair work than most. These were working tools for the original owners, and most have been heavily worn and often altered over the course of their service. It is a great-playing and spectacular-sounding guitar, brighter than many large rosewood guitars with the cut of an archtop and the deep power of the jumbo flat top combined. It includes a period Gibson tweed 16" hard case. Overall Excellent - Condition.
×