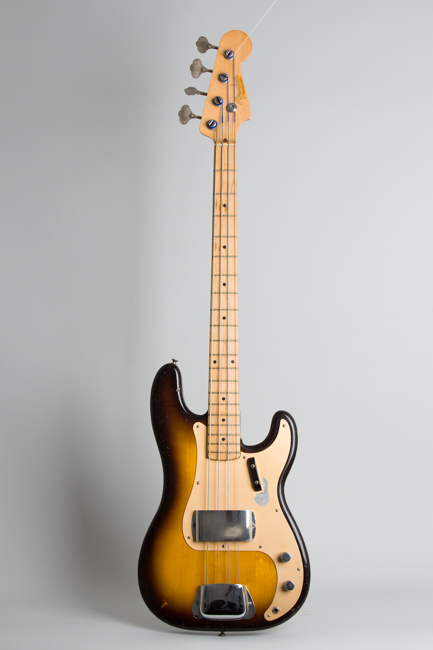 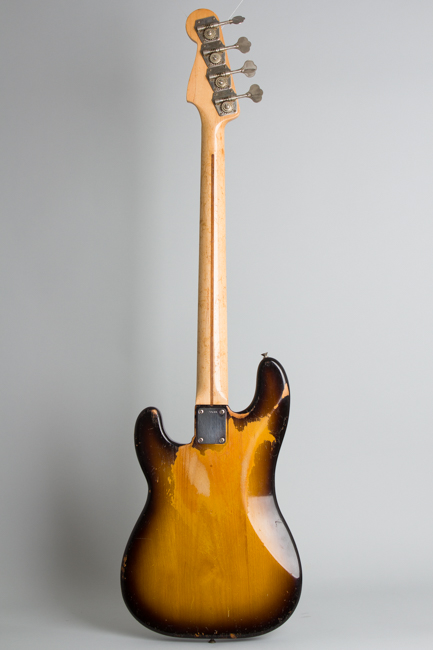 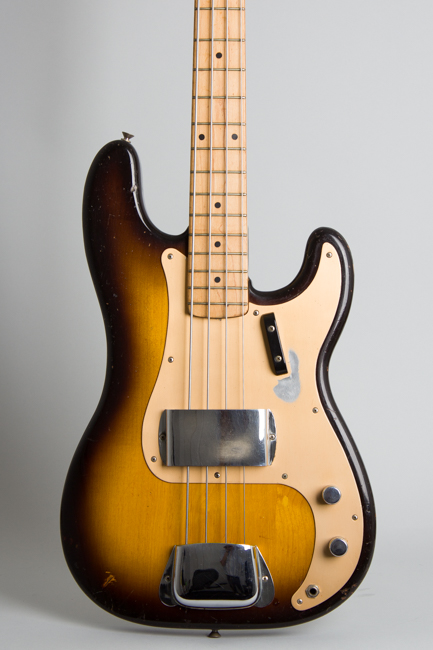 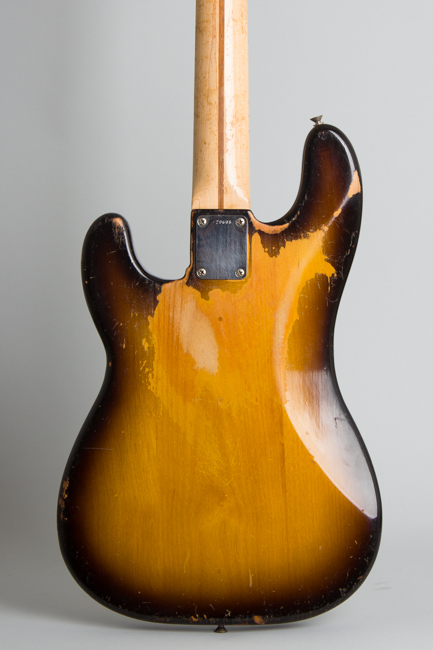 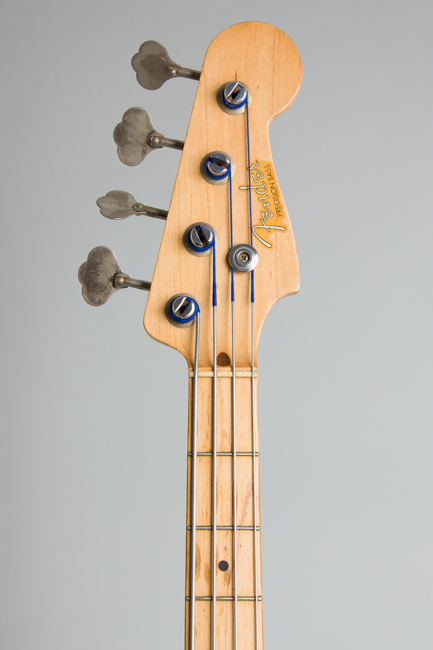 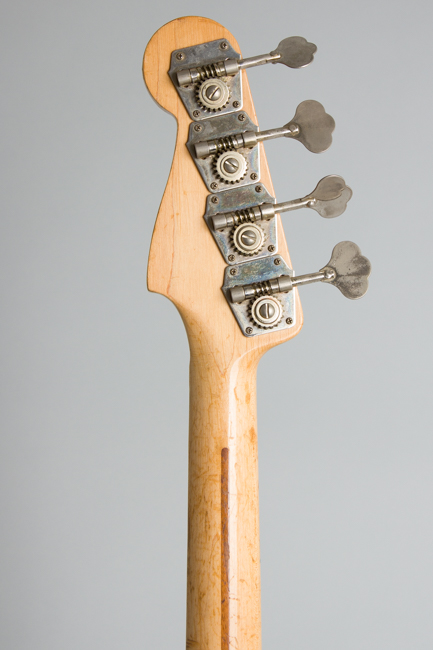 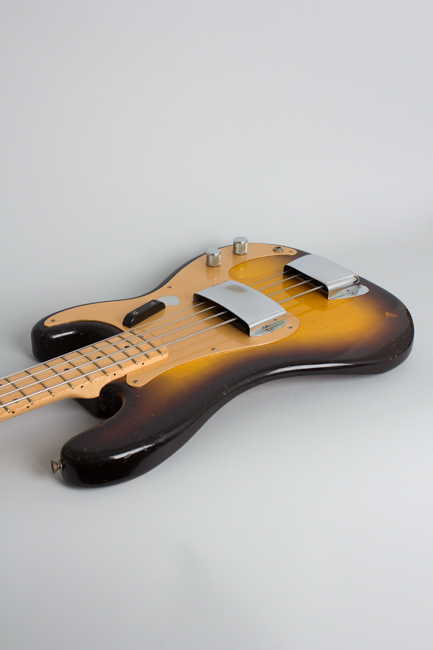 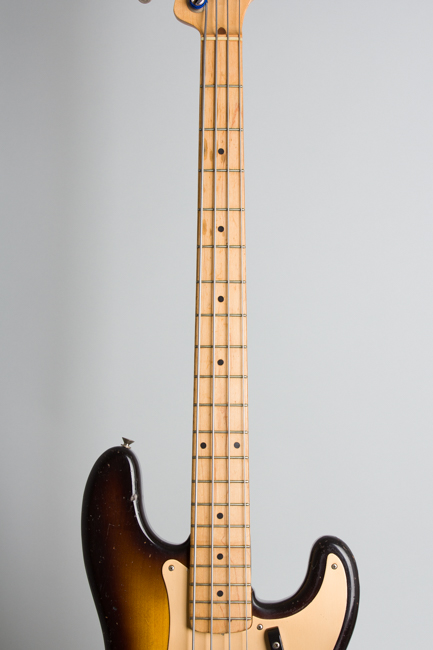 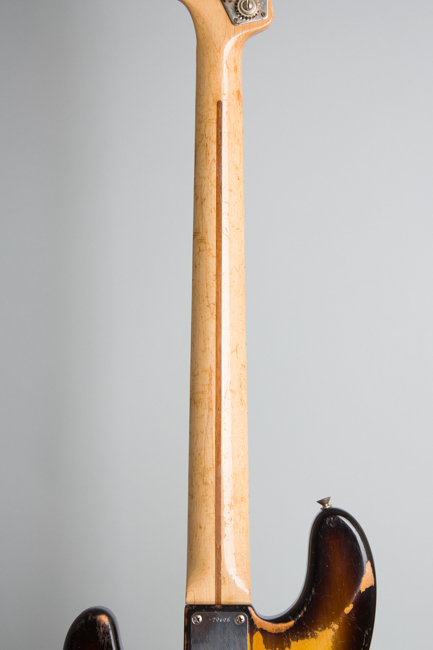 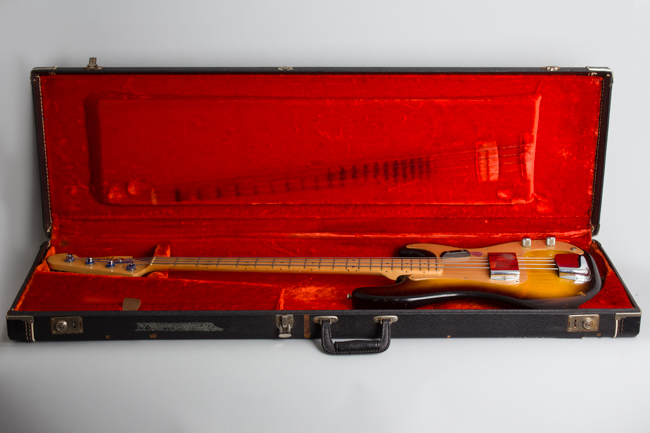 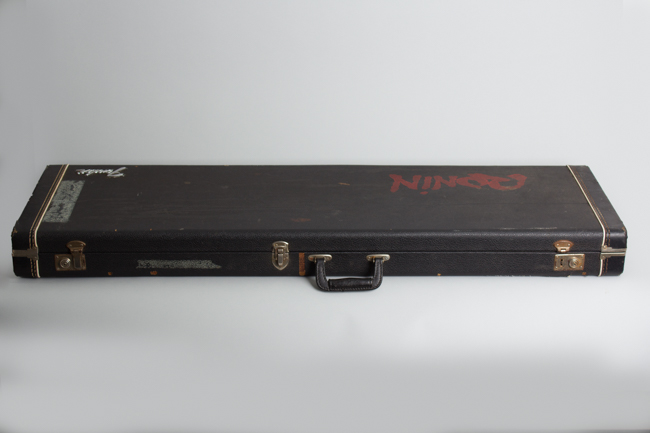 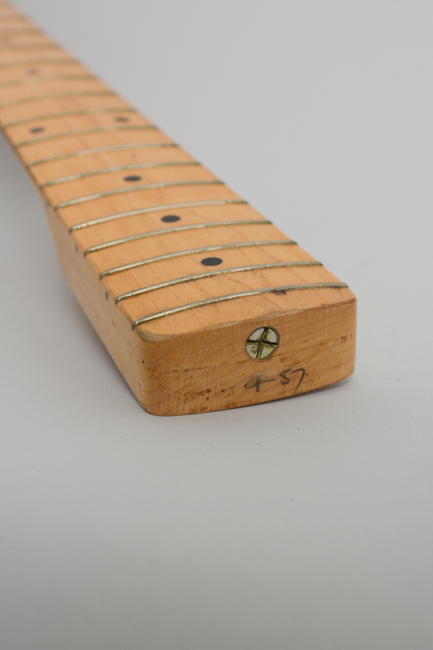 This lovely "genuine relic" 1957 Fender Precision Bass is a somewhat played-in but very early example of what many players and collectors hold to be the finest electric bass ever made, the template for so many to follow since. In mid-1957 the Fender Precision bass was re-designed with this combination of features: gold anodized pickguard, split pickup, fully adjustable 4-saddle bridge and larger "Strat style" headstock on a much slimmer one-piece maple neck. These basses have been sought after since the earliest beginnings of electric instrument collecting, generally regarded as some of the most desirable of all Fender basses and the apex of Precision Bass design.

This fabulous bass is worn but nicely original example from one of the first batches of this world-beating new design assembled within the first weeks after this updated version went into full production. The neck and body are both dated 9-57; typically September is typically when Fender geared up for the fall season after the July NAMM show and a summer lull. The pots are coded to the 32nd week of 1957. The entire production run for this version of the Precision was only a two-year span; by summer 1959 the slab rosewood fingerboard was added. Although considered iconic and always popular these basses have never been common and the first examples like this especially rare.

This bass has raised A string polepieces on the split pickup; that interesting if inconsequential feature was discontinued when someone at the factory realized that since the split-coil pickup could be adjusted to follow the curve of the fingerboard it was superfluous. It also has the earlier '50s stately two-tone sunburst lacquer finish on the body; a few months later Fender added red to the mix, resulting in the new-for-'58 three-tone look. The beautiful gold anodized metal pickguard would last into the late summer of 1959, then be replaced by tortoise celluloid. The tendency of the metal to wear through was the reason Fender Sales insisted on the change but the "gold guard" has been a status symbol ever since!

The natural-finished neck has a slim profile, round-backed but with the residual hint of a "V". The feel was much changed from the larger chunky pre-'57 style. The headstock is adorned with the old "Spaghetti" Fender logo decal, which is in excellent shape. This heavily played bass has major Mojo and is an absolute classic, as played by the great majority of the then-new electric bassists of the late 1950s and heard on countless recordings. Even in the 1960s one of these old maple neck, gold guard basses was often considered a status symbol by the discerning bassist (Amusingly illustrated in the film "That Thing You Do"). It remains a wonderful instrument for any style of music, an absolute joy to play, and a prime example of the ultimate glory days of Fender.

This just 65-year-old bass shows moderately heavy wear overall but no repairs or alterations except for a replaced tone cap (a 1970s orange drop). The finish has some checking and a sizable collection of dings, dents and scrapes over most of the instrument. Still the only large area worn away is a considerable area of heavy belt-buckling on the back. Many of these basses were played for decades and a large proportion of them have lost the original finish entirely. The face is better preserved, with dings and dents all around the edges and a finger-wear spot below the strings. The body edges have some deeper dings and dents. There has been some minor touch-up attempted over the years, but nothing intrusive.

The neck and headstock have the light lateral checking typical of '57s and small marks on the fingerboard into and through the finish, but the board is not substantially worn through to the wood as many are. The back of the neck has many small dings and dents but again is not as heavily worn through as many. The anodized pickguard has typical playing wear to one spot below the finger rest but the rest of the surface is cleaner than many and retains a very attractive patina.

Internally the bass is untouched original except for the later tone cap, probably changed in the 70s or 80s. Even the foam under the pickup coils appears original or at least quite old. All other components and solder joints are unaltered original. All external hardware is original down to the screws and both chrome covers are present; the foam mute is even still intact under the tailpiece cover but can be removed if desired.

The original small-wire frets show some light wear but are quite playable; the maple neck is lovely and straight and the truss rod does not even appear to have been adjusted much over nearly 65 years. This is not only a very cool piece of Fender (and electric bass) history but also one of the best playing and sounding Precisions we have had, with a powerful, pickup and really resonant body. It is currently housed in a 1970s Fender case that once held a Jazz Bass and appears to have belonged at one point to a band called "RONIN" as that is stenciled on the face. However you look at it this Precision has a lot of history behind it! Excellent - Condition.
×