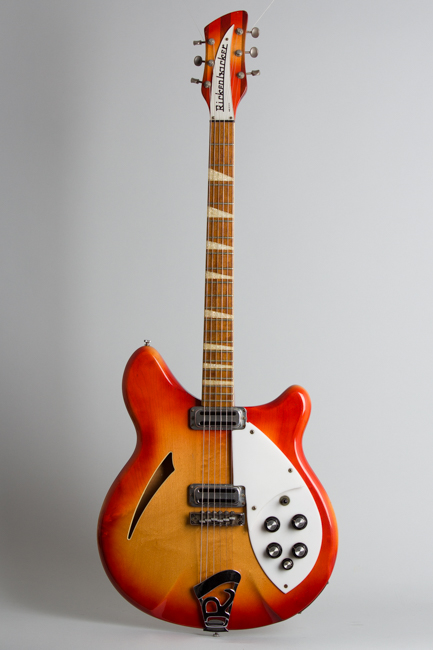 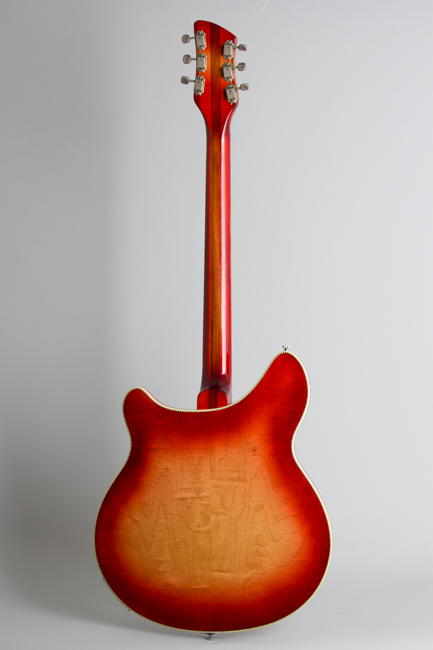 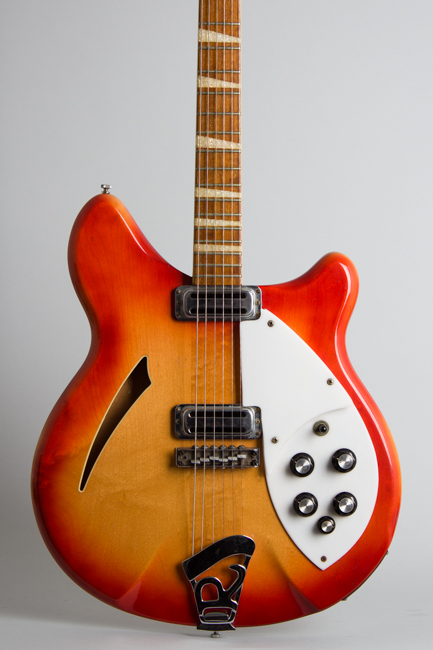 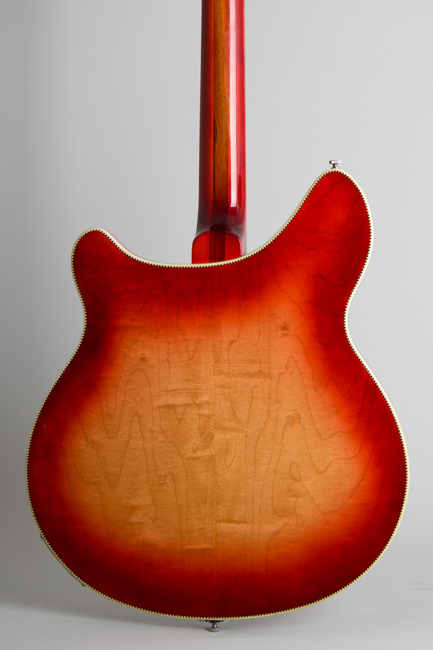 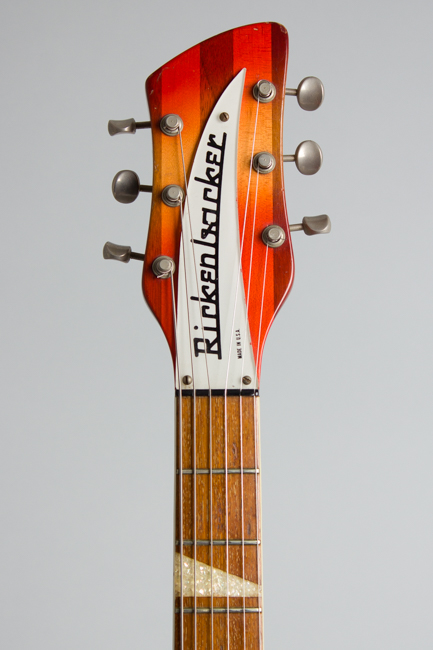 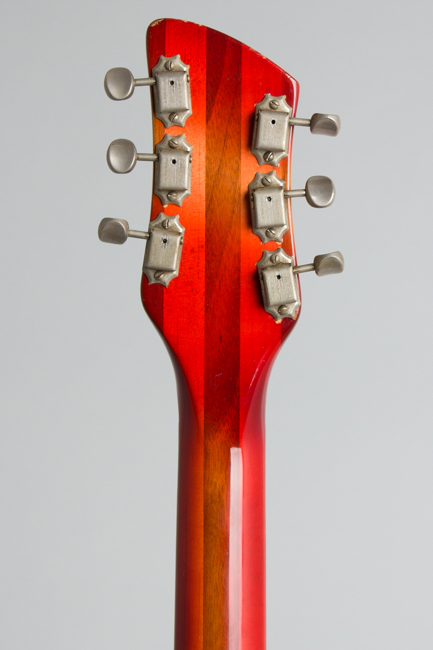 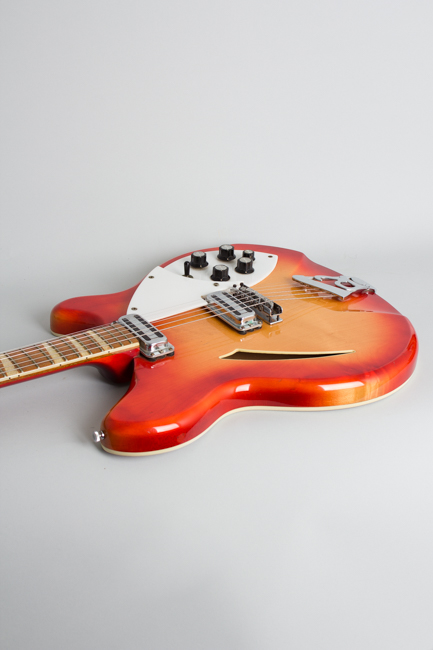 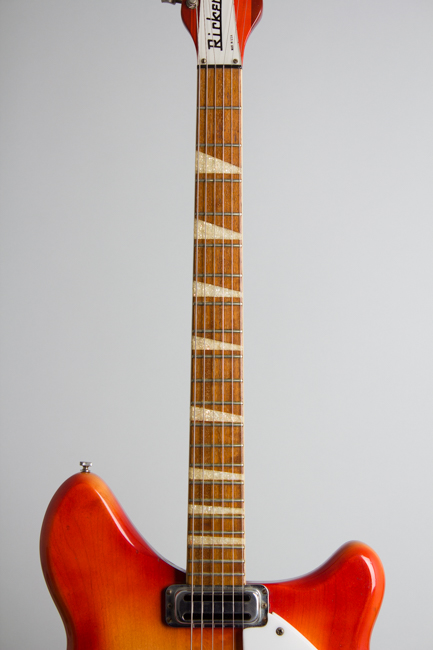 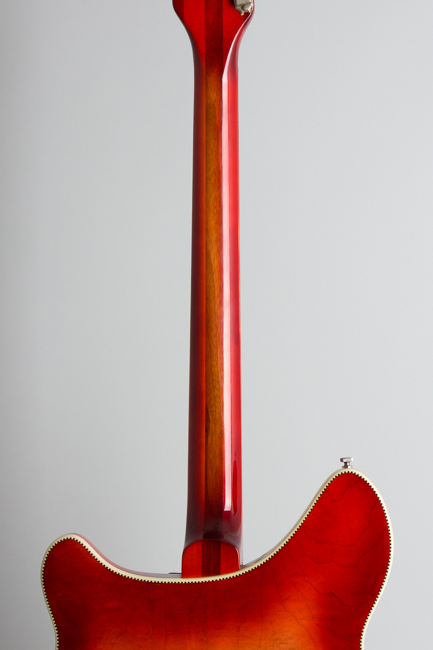 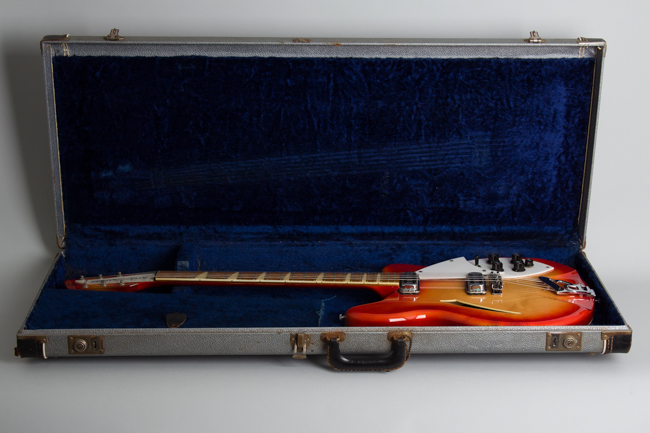 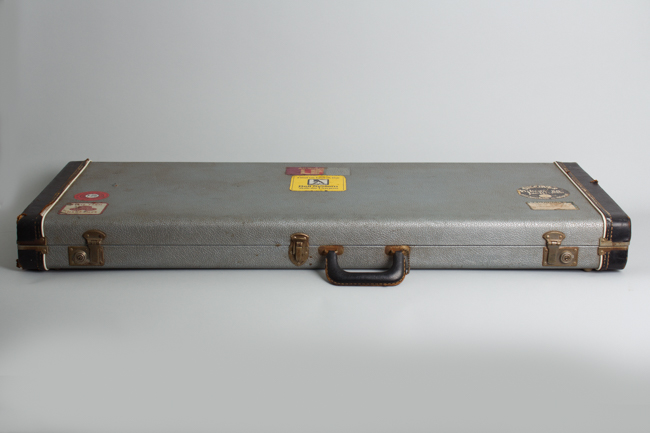 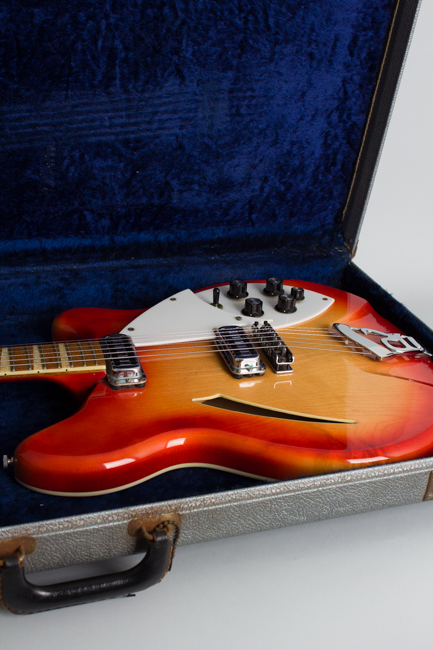 One of the most instantly recognizable of all classic 1960s guitars, the Rickenbacker "300" series of thin hollow-body guitars has returned to favor again and again as new generations discover its bright, well-defined sound and utterly distinctive look and feel. This is a superb example of a "Fireglo" (red sunburst finish) Model 360 from Rickenbacker's peak year of 1966. This sleek California hot rod was the mainstay of Rickenbacker's line from the late 1950s to the present, and one of the most popular guitars of this period. The round-edge (post-1964) Model 360 is virtually an icon of the 1960s, synonymous with the music and sounds of that era as well as more recent styles. They remain one of the sharpest-looking and most distinctive-sounding of all vintage designs.

The Model 360 designation refers to Rickenbacker's "Deluxe" features combined with two pickups and no vibrato; the 365 added that feature while the 370 and 375 have three pickups. This trademark "Fireglo" sunburst finish with a vibrant red-natural fade is the look most associated with these Rickenbacker models, a truly unique livery that still stands out in any crowd. The white trim sets this off perfectly.

This is a lovely guitar, dating to October 1966 and remaining in fine original condition. The "Deluxe" features include a round-topped carved maple body with checkerboard binding on the back and a bound "cat's-eye' soundhole on the face. The laminated maple/walnut neck has a lacquered padauk fingerboard with "slash" inlay made of crushed pearloid. The headstock is fitted with Kluson Deluxe tuning keys and the trademark white Rickenbacker logo headplate.

The two "toaster top" pickups are mated to a 5-knob wiring rig allowing maximum blending flexibility, with pots dated the 32nd week of 1966. The guitar is wired with the "Rick-O-Sound" stereo output the company has installed for decades but few players have ever used. A convenient mono jack is provided as well...a most useful feature Gibson missed!

At the time this 360 was made production had reached an all-time high at Rickenbacker. The company's instruments of this period are generally more consistent in quality than many others but one production change is significant. Beginning in summer 1966, a channel was no longer routed for pole magnets under the neck pickup, so from that point on they have a much solider neck/body joint. As a result this example made just a few months later has maintained a better neck angle than many earlier 300-series models, making for excellent playability.

The single most famous 330 series Rickenbacker guitar would be John Lennon's 1964 Model 325, used during the Beatles peak of worldwide fame. Following the Beatles' lead, many young musicians both in the UK and US in the 1964-68 era chose thinline Rickenbacker guitars, making them an enduring 6-string symbol of the period. The models 335 and 345 are most firmly associated with the early Who; the group's first records are a showpiece for the unique Rickenbacker sound. Despite sometimes being dismissed with a "1960s cliche'" tag, the Rickenbacker 360 is a more versatile guitar than many realize, a great-sounding and very classy instrument for both retro and modern sounds!

This is a lovely original 360, showing some minor wear but structurally excellent and completely solid, exactly what one wants when looking at these 1960s models. The guitar shows light play wear; the natural FireGlo finish is clean and bright, with only very minor fade and small scuffs, rubs and dents, most notable scratching into but not through the lacquer on the back. There are a few chips and dings here and there, but really not much wear for a 55+ year old guitar.

All hardware appears original and complete; the bridge is the correct period fitting but a few of the saddles have extra notches, so some finagle may have gone on there long ago. The screw-on saddle cover is missing, as many are. Internally the wiring rig is untouched original. The neck/body joint is completely solid and the neck angle is VERY good for a 1960s Rickenbacker; there is plenty of room to adjust the bridge either way which is often not the case with these. The common splits under the fingerboard by the nut are entirely absent, the sometimes finicky truss rods in fine working order. The lacquered fingerboard has a few tiny worn spots, the original frets show some very light wear.

This is simply an excellent playing example, direct from the mid-'60s into the 21st century where this design STILL looks modern. It remains as it has for over five decades, resting in the original silver HSC which is a bit worn with some sticker action on the lid. Overall Excellent Condition.
×