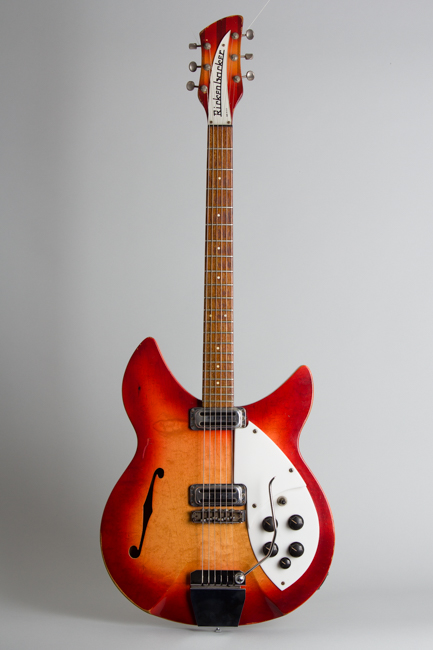 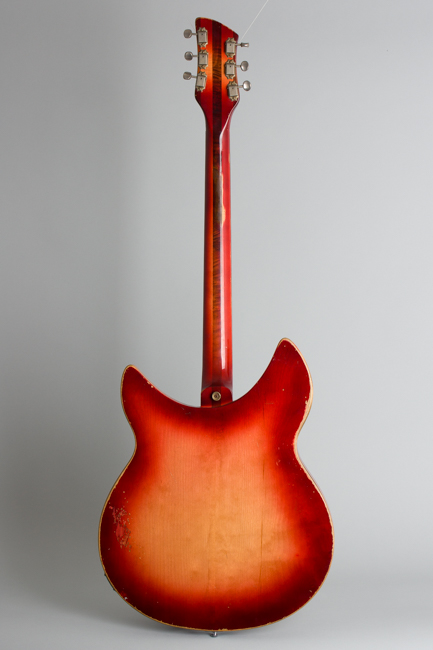 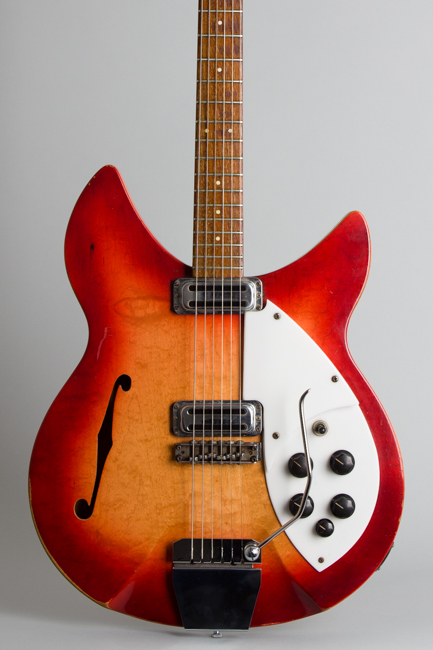 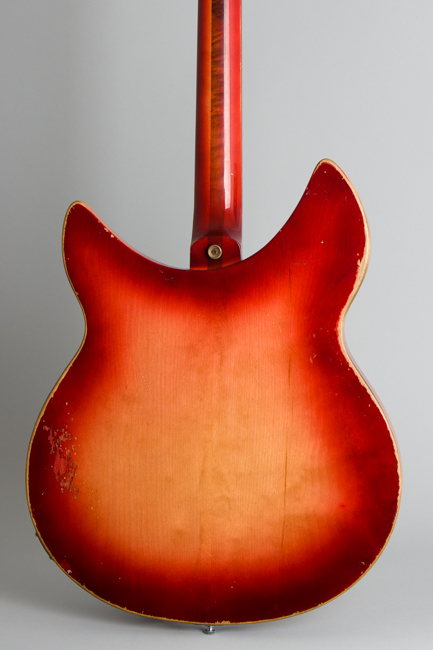 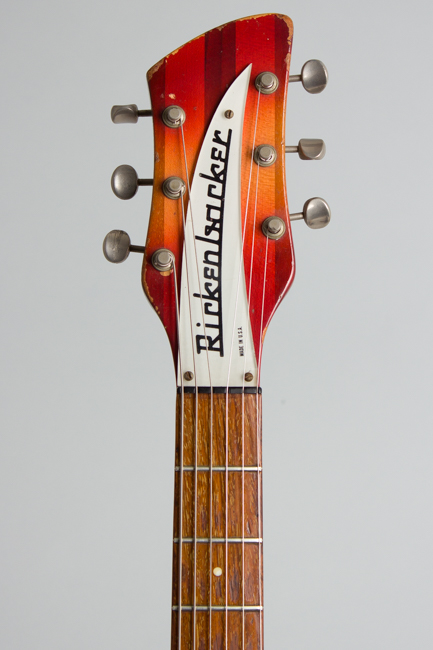 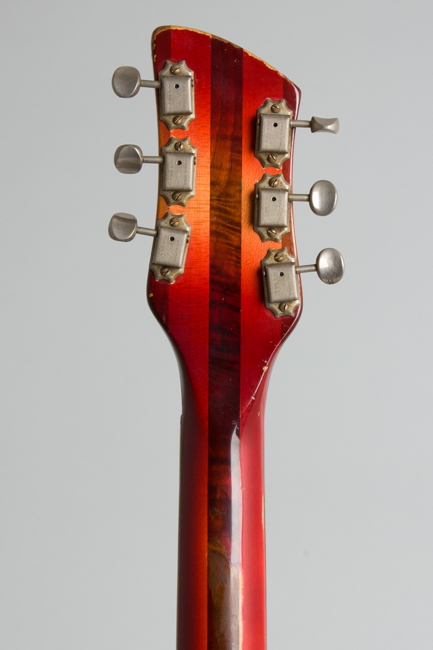 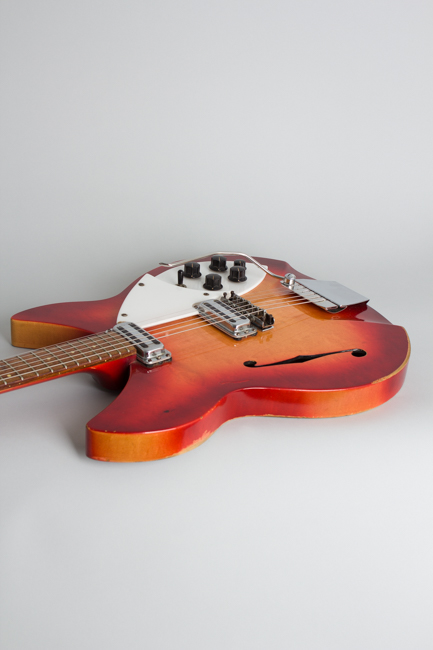 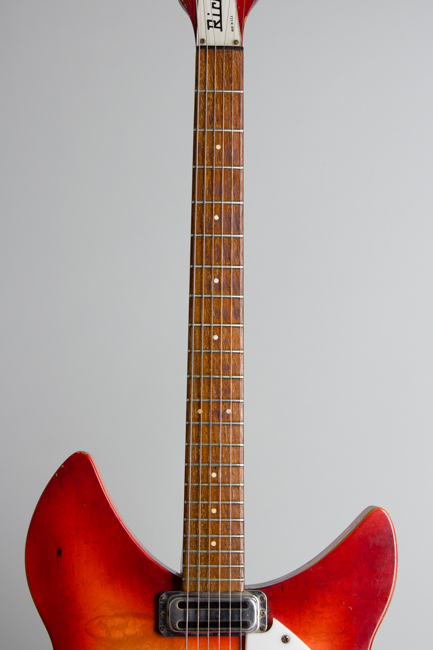 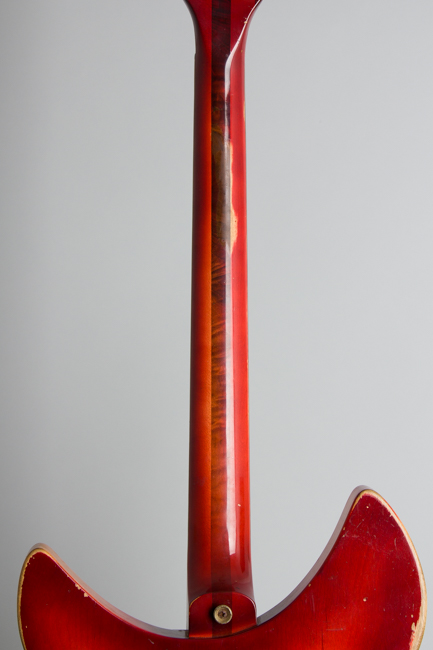 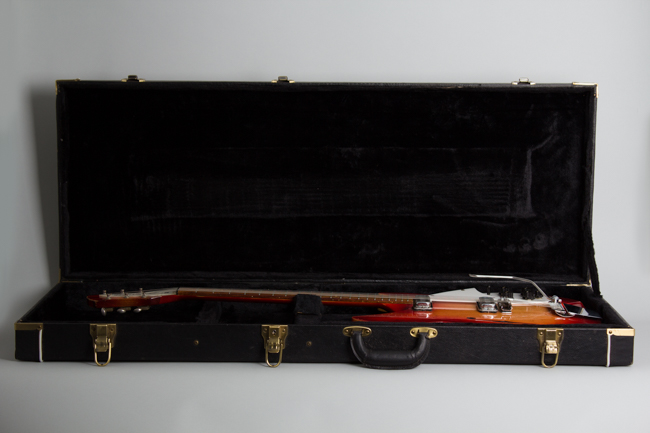 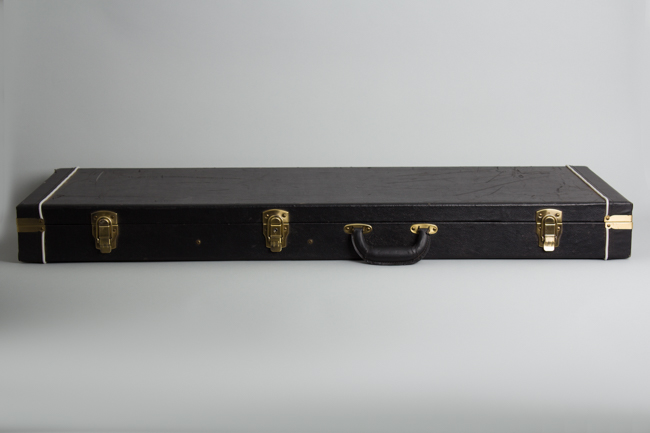 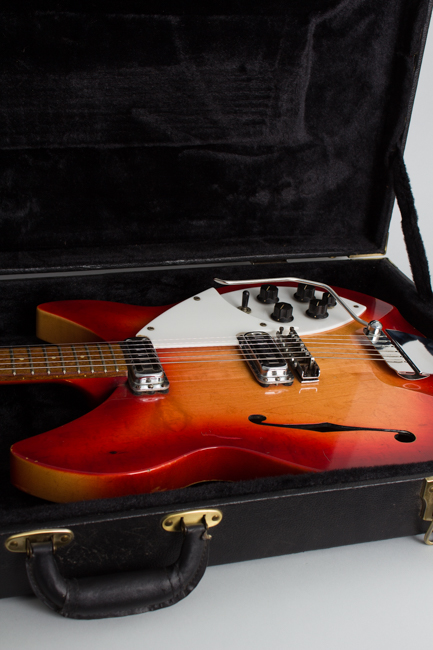 This is a very rare and classic 1960s Rickenbacker -- the Model 335-S "Special" export model with an F-soundhole instead of the standard scimitar style. Rickenbacker's UK distributor Rose-Morris requested this feature on instruments ordered by them, which they felt would appeal to the more "conservative" UK customer. Most of these were sent overseas originally, although limited numbers were also sold in the US.

There are no other definitive physical distinctions between a Model 335-S intended for US or UK distribution, or elsewhere for that matter. The great majority were ordered by Rose-Morris and sent to the UK, but if a US dealer ordered one (few would have reason to, but it did happen!) it would be shipped; it made no difference to the factory. This popular model was also exported to Canada, Australia, and the continent including a large (for Rickenbacker!) batch to Sweden.

This example dates to July of 1965, and has the plainer all-black knobs generally seen on earlier export guitars. The Fireglo finish is particularly vibrant, with a darker red hue than many from this period. The Accent Vibrato tailpiece is an exact repro, but all other hardware is original. Internally the guitar remains all original; the pots match perfectly; every visible pot date reads 65-26 except the blend control is 65-11. One oddity of this particular is there was never a strap button fitted on the body horn; this is the second example we have seen from this batch with this odd omission! Someone added a Fender strap button on the heel, probably immediately.

Whether originally sold in the UK, US or elsewhere this 335-S is an absolutely classic British Invasion era guitar -- still the instrument many people associate with that particular style and era. The Animals' Hilton Valentine is one of the many players that used this model prominently around 1965; Pete Townshend, of course, used many examples of both the double and triple pickup versions destroyed at least a few thus helping to account for their current rarity! This is a well used but great playing example of this especially cool Rickenbacker, on the market for the first time since 1978!

This is a well-worn guitar but is remains structurally excellent and all original except the trem unit, which is Winfield Vintage's super well engineered repro of the original Accent. There is play and handling wear everywhere, most heavily on the body and headstock edges and some heavier belt buckle spots on the back. There is one long scratch down to the undercoat on the face and an odd small black spot on the upper horn which looks like some sort of ink accident.

Structurally the guitar is excellent, with a solid neck angle and plenty of room to adjust the bridge in either direction. The fingerboard has been cleanly reglued to the neck on both sides behind the nut, resealing the typical separation seen on many period Rickenbackers. The twin truss rods are in excellent shape showing no signs of the damage caused by over-adjustments often a legacy on well-played Rickenbackers. There is an old period Fender Strap button on the neck heel; as noted the standard Rick strap button was never mounted on the edge of the upper body horn so this was probably added right away. The jack was replaced long ago, the original is still in the case.

While looking fairly well used this is a spectacular "genuine relic" Rickenbacker. We are told that nearly all the wear was accrued before 1978, when the current owner acquired it so somebody likely got a lot of use out of it in the 1960s (probably not Townshend as it's still in one piece!). The fingerboard shows some typical wear and the original frets have been crowned down just a bit and still play very well. This guitar has the classic Rickenbacker feel and sound in spades, a spectacular beat-era survivor housed in a later (non-Rickenbacker) HSC. Overall Very Good + Condition.
×