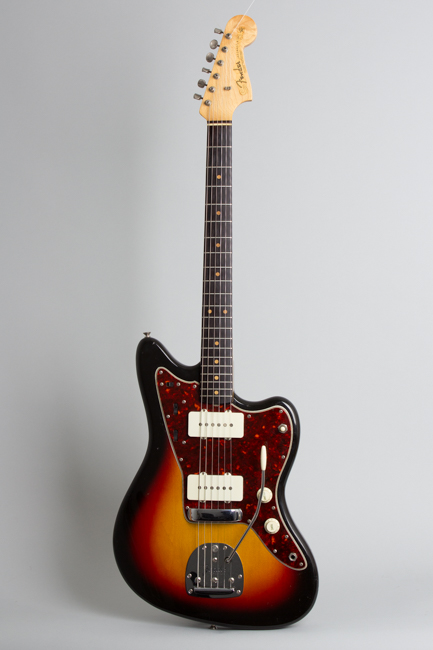 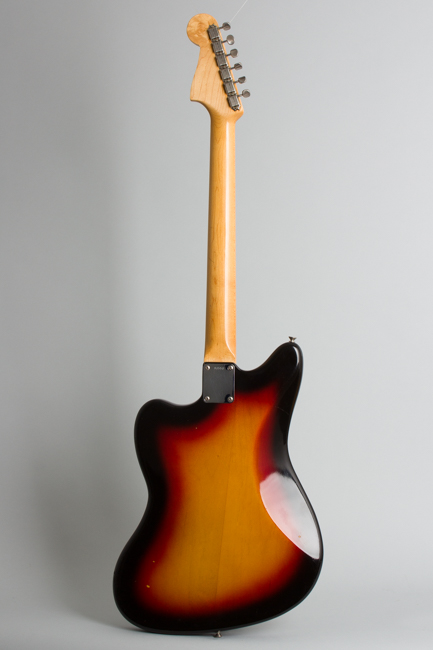 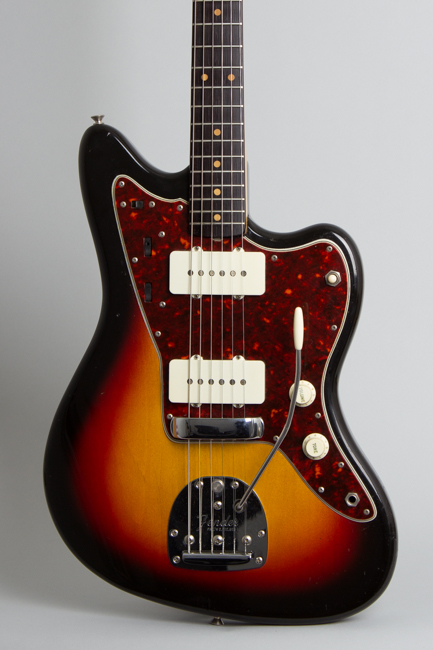 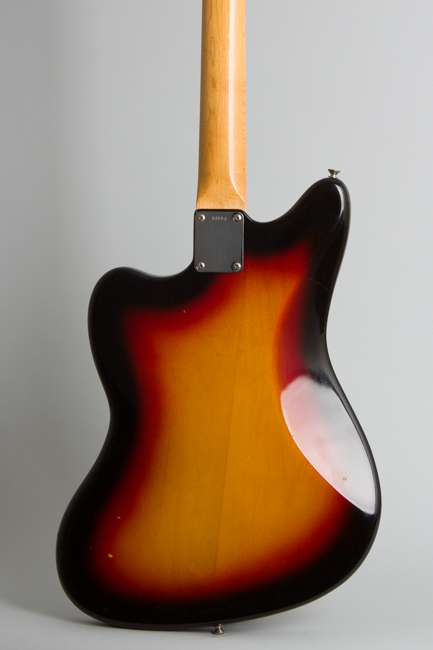 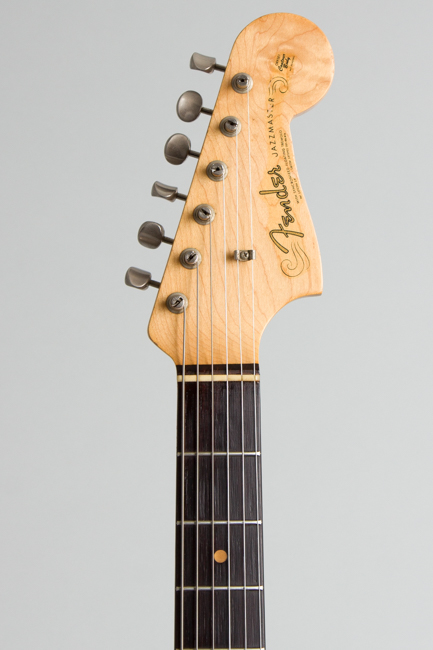 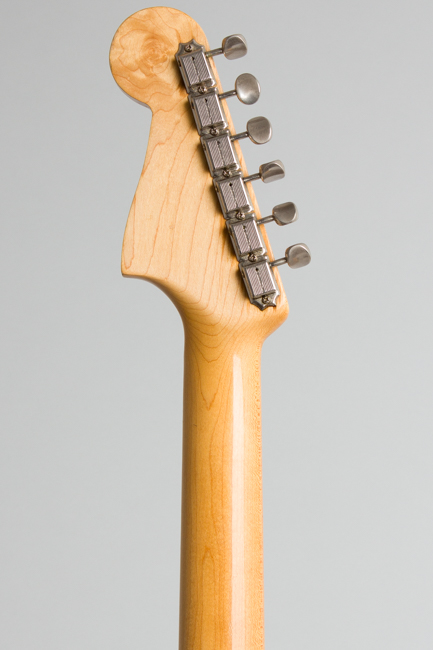 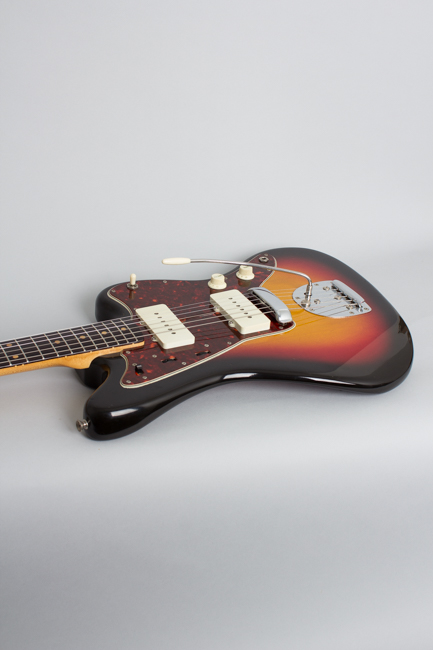 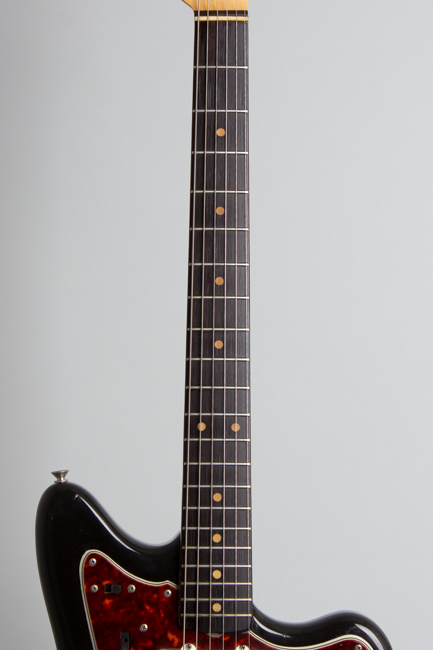 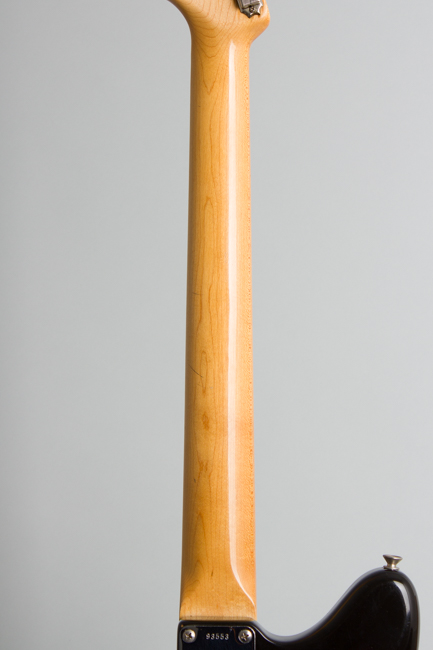 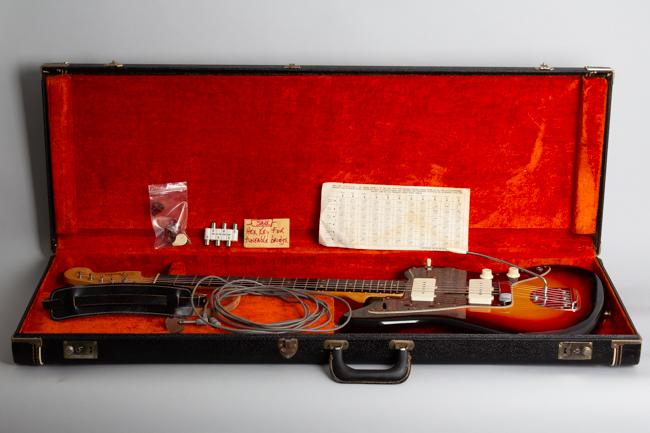 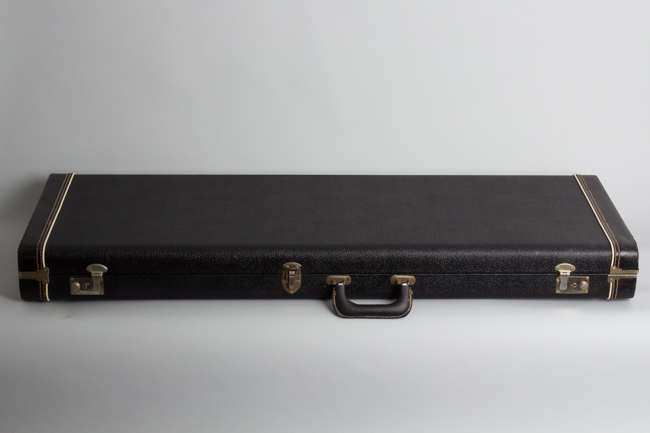 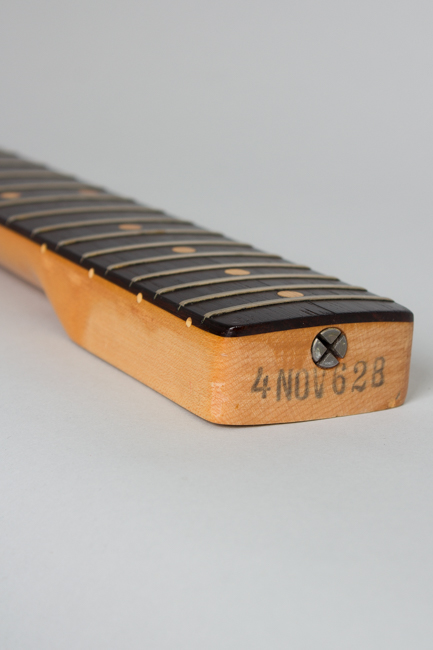 This truly beautifully preserved late 1962 Jazzmaster is practically a time capsule piece, loaded with a bevy of classic pre-CBS Fender features. These include the medium-thickness unbound rosewood fingerboard with "clay" dot inlay, beautifully blended deep 3-color sunburst lacquer finish on the body and gold "Spaghetti" logo headstock decal. The pickguard is the fairly dark nitrocellulose tortoiseshell style which was a Fender trademark at the time. The standard Jazzmaster wide-coil pickups, rhythm circuit and floating trem are of course present.

The ink-stamped neck date is November 1962, exactly 60 years ago! The original volume pot is coded to the 50th week of 1959 (it had been in stock for a while!) and the tone pot to the 45th week of 1962, so the guitar was likely assembled and sold right at the end of '62 (could it have been under someone's Christmas tree?) or early in 1963. In this pre-Beatle "Camelot" era the Jazzmaster was on the cutting edge of "modern" electric sounds.

Early '60s Jazzmasters are often exceptionally fine instruments. While after spring '62 they ranked below the newly-introduced Jaguar in the Fender line the model still offered a unique feel and sound. While they did not catch on with the jazz artists Leo intended them for this was still an influential and quite successful guitar at the time, seen with many period players across a wide variety of musical genres.

This guitar remains original and complete inside and out and sounds exactly as it should, with the bright but slightly deeper tone character specific to the Jazzmaster and that famously flexible vibrato system. After a long period in the shadows the Jazzmaster has been increasingly popular over the last couple of decades with new generations of performers re-discovering its particular charms. This prime Pre-CBS example has survived in exceptionally fine condition looking more like a few of years old than 60!

Overall this is a very clean guitar, showing only some light wear overall; It is not pristine but as pretty close. The lacquer still has a showroom shiny look about it, not dulled down or checked like many from this period. There are some small dings and dents scattered around the body finish, but no heavy wear spots. The face has a few small dinks above the rhythm circuit area, and a few more at the back edge of the top, and around the edges. A few of these have been delicately touched up. The back has a few noticeable dings through the finish. The sunburst color is very strong with virtually no fade.

The lovely tortoise celluloid pickguard shows comparatively little shrinkage, which is a common issue on early Jazzmaster guards. All hardware is original and complete, including the vibrato arm and snap-on bridge cover. The metal parts are still shiny, the plastic bits still clean and undamaged. The original small frets have just some very light wear in the lower positions, and the neck finish is barely worn at all. The original factory shims are still in the neck pocket.

It looks like this guitar has only light play time since new. The only mystery is it is housed in a first generation BLACK Tolex Fender hard case, which was not introduced until 1964. The guitar appears to have been in since new, indicating it may have sat in stock for a while before being sold originally. This case is also very clean and the pocket contains the original grey plastic Fender cord, black leather strap, Allen key and case key (in the original small manila envelope marked "SAVE" in red) a handy chord chart and a handful of original period Fender (and other) celluloid picks. This is pretty close to a time capsule guitar, apparently waiting since 1963 for the right home and overall a truly great example of a pre-CBS Jazzmaster. Overall Excellent + Condition.
×