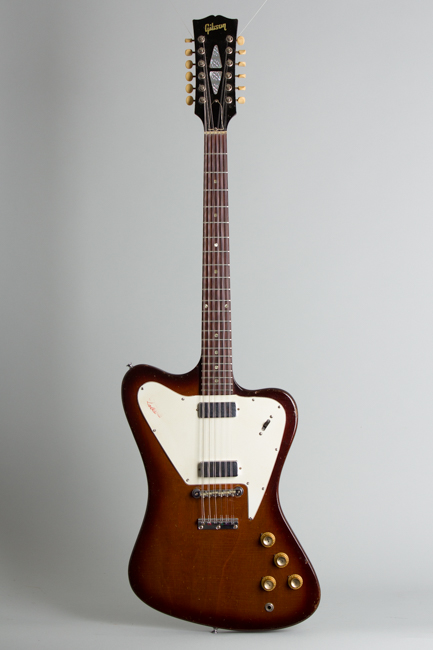 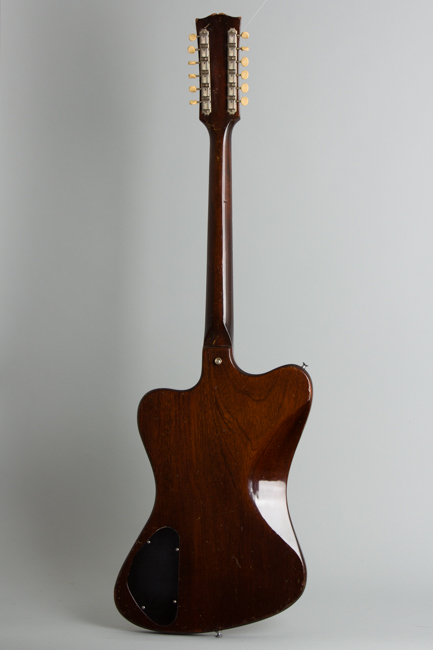 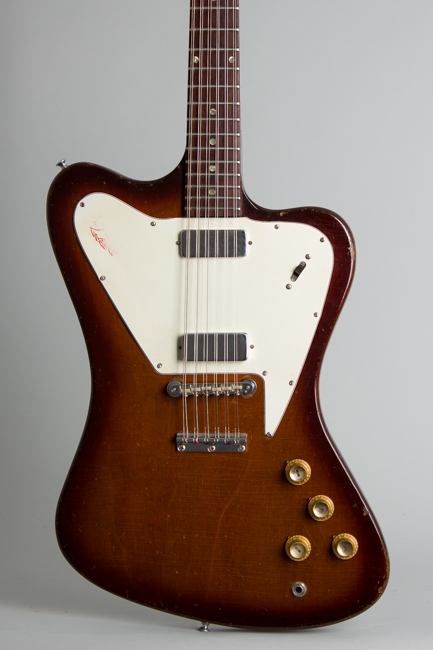 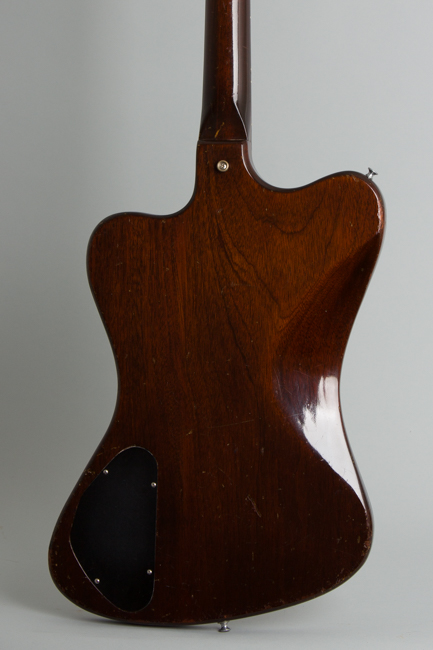 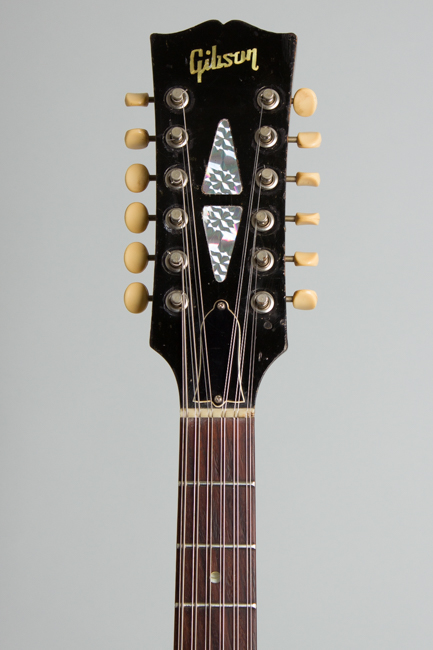 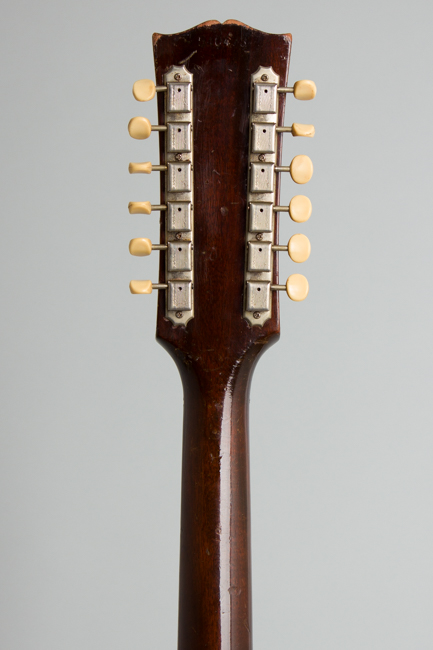 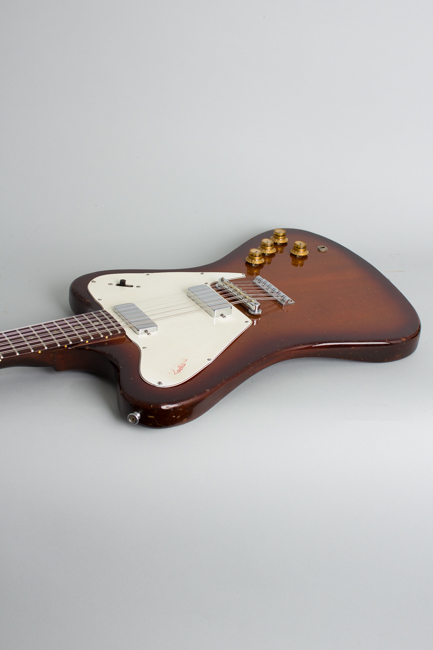 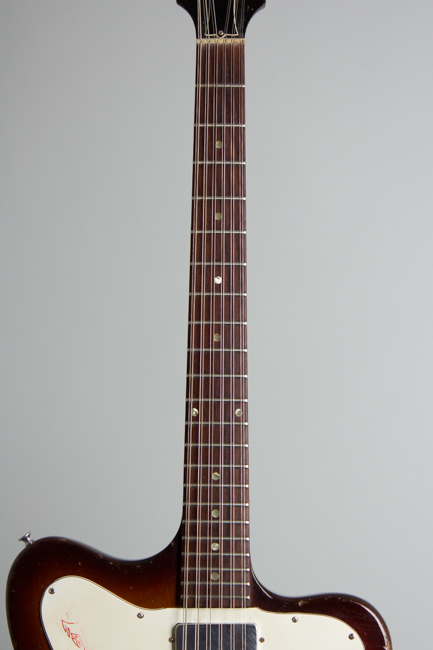 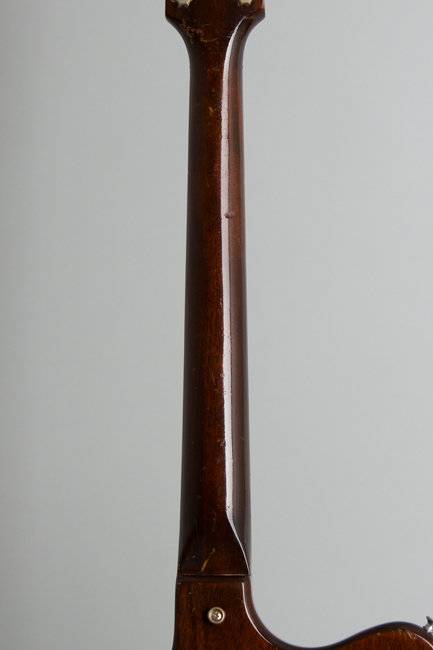 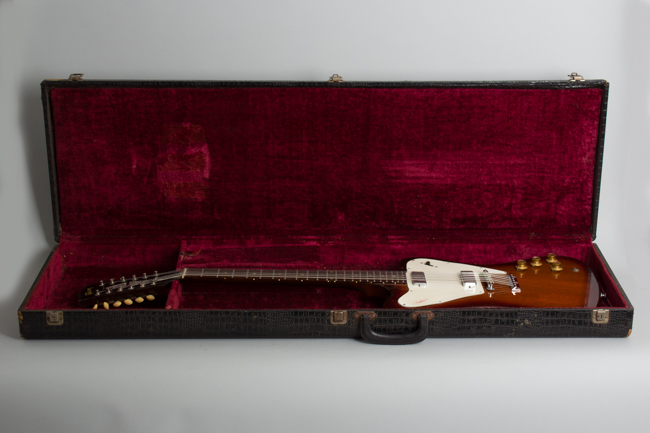 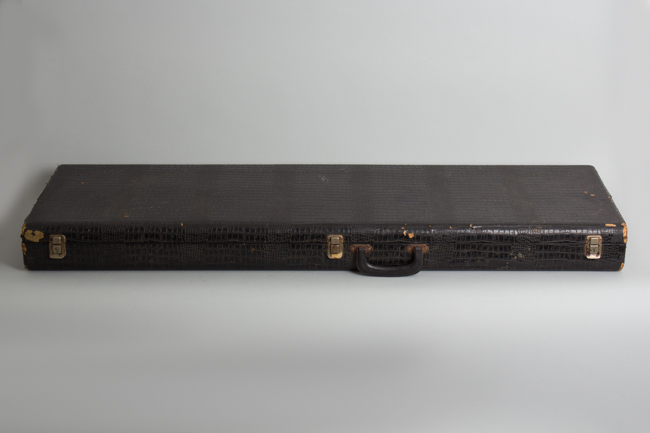 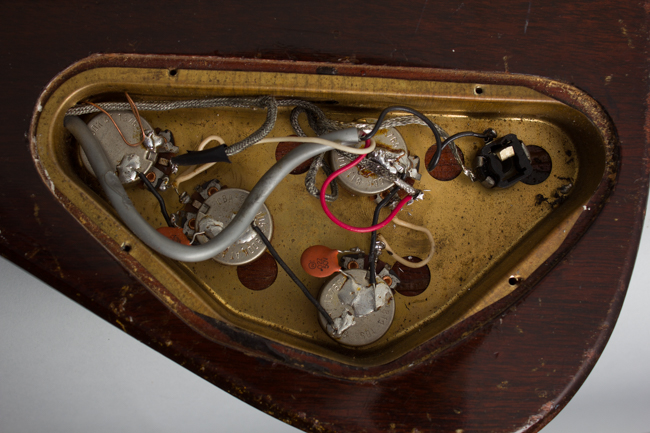 The Firebird XII is one of the rarest variants of Gibson's 1960's high-flying solidbody bird, made only in 1966. 248 of these were shipped out that year, and a further 24 stragglers in 1967, and that was it! Although this remains a super cool-looking and great-sounding guitar, like many it arrived too late to take advantage of the Beatles/Byrds folk-rock 12-string craze, which Rickenbacker had both fueled and most heavily profited from. By the middle of 1966 the guitar market was flooded with electric 12-string designs, and most of them fell by the wayside fairly quickly as the trend had already peaked.

This 1966 Firebird XII is one of the best of them, or at least more unique. This very striking guitar shares most features with the "Non-Reverse" Firebird V; these was no earlier "reverse body" attempt at a 12-string version. In general these second-try Firebird models were lower-priced, simplified versions of the earlier "reverse" body guitars introduced in summer 1965.

The body is fluidly sculpted mahogany with a glued-in neck, finished with a dark 2-tone sunburst on the top. This was far simpler to build than the earlier laminate neck-through-body Firebird design. The "non-reverse" body is light and fairly handy, and balances the long headstock better than some other shapes. The fingerboard is unbound and dot inlaid; the nut is a very slim 1 1/2" common at the time. The long symmetrical headstock is Gibson's standard 12-string style borrowed from the flat-top line; no attempt was made to create a special sloped Firebird version.

Like the FBV the XII mounts two special Firebird pickups, bright but meaty-sounding mini-humbuckers which make this is an exceptionally good-sounding solid-body 12-string. The Tune-O-Matic bridge is mated to a simple block metal tailpiece, thankfully no attempt was made to fit a vibrato! Despite being a very workable design the Firebird XII is something of a lost Gibson classic. The "non-reverse" Firebirds have often been discounted in Gibson history, taken on their own merits these are very distinctive guitars unlike any other: light, slim-bodied, fast-playing and very stylish, and the 12-string is no exception.

This 'bird is moderately well-worn and played overall; somebody got a decent amount of use out it back in the day! The unaltered original finish shows numerous rubs, scrapes, and dings distributed over much of the instrument, but no large heavy wear areas. There is one deeper scratch on the back, rubs to the wood on several body edges and one chip to the top just below the controls. The pickguard has some shrinkage as is common with some pulls at the screws, a repair at the upper tip and the lower rear tip gone. Much of the bird logo on the upper quarter is worn away.

The guitar 55+ year old remains largely original, with some parts replacements and restoration but nothing that undermines its vintage character. The exact original tuners have been restored after an unfortunate Groverization probably in the '70s (which added a couple of pounds to the headstock!). There are visible compression rings on the headstock face from this but no other sings of this aberration; the headstock is fairly well worn as it is anyway.

There has been a common switch replacement with a correct style slider; these inexpensive switches often broke in use and are a known weak point. The black plastic control cavity cover is a replacement; all the screws holding it and the pickguard are the correct style but appear newer than the instrument. The pickups, pots and wiring components are original but many of the solder joints have been redone.

The oddest alteration is the two large pearloid headstock inlays have been neatly replaced with "psychedelic" light-catching shimmer material; this could be un-done if desired but we think it is one of the coolest period guitar mods we have ever seen and somehow wholly appropriate!

The neck is in excellent shape; it appears to have been neatly refretted in the correct style long ago and plays very well. While this rare 'bird has seen a fairly eventful life it remains an excellent player and unique sounding and feeling instrument, the only 12 string equipped with Firebird humbucking pickups. It is ready for the next century, resting in a period (but not Gibson issue) jobber case with a funky black alligator covering. Very Good + Condition.
×