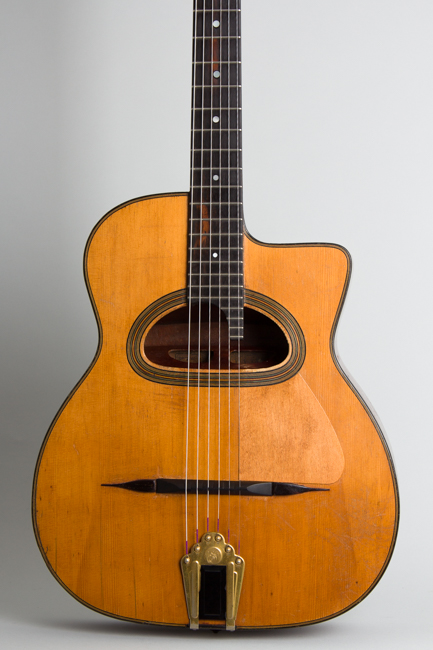 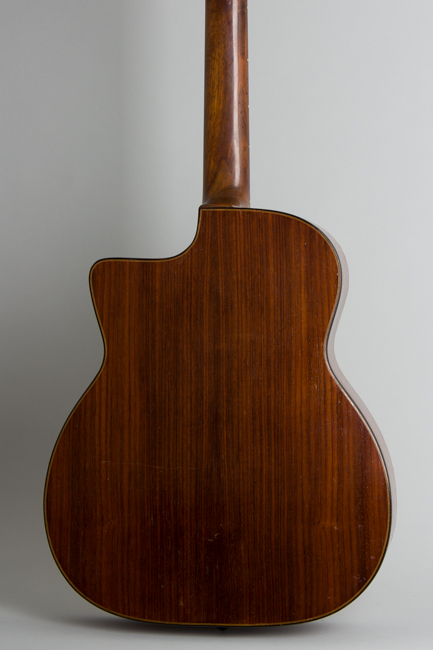 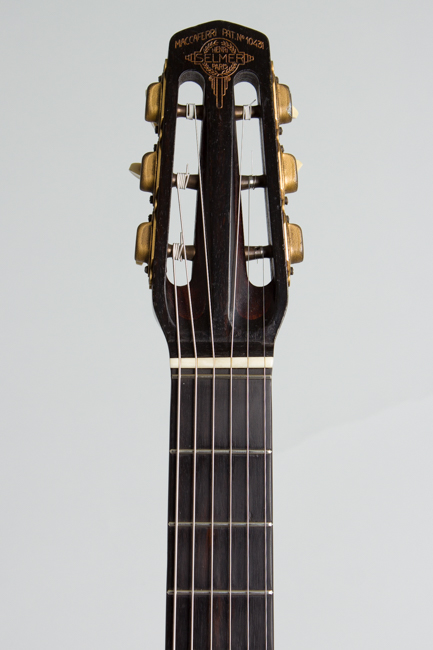 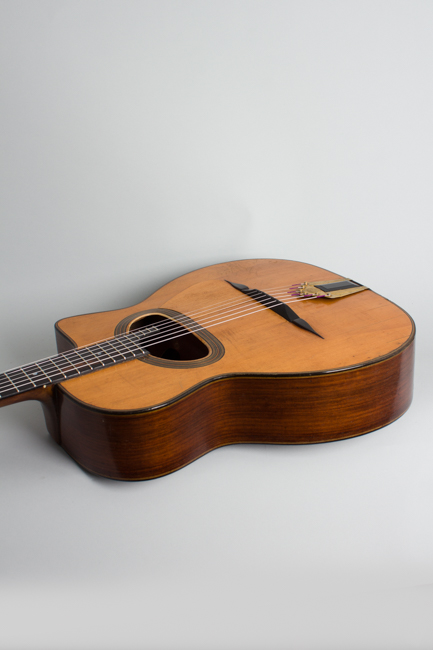 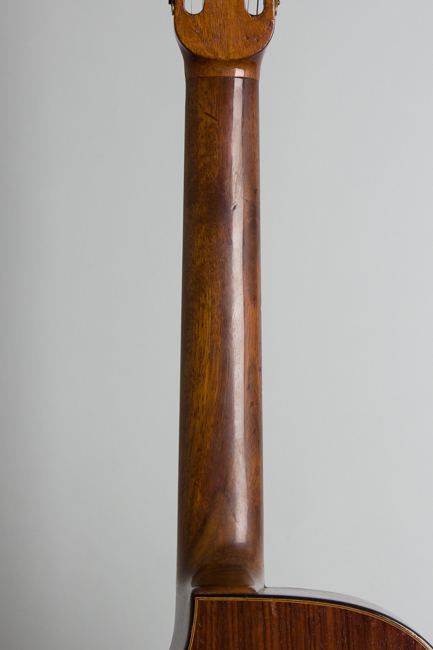 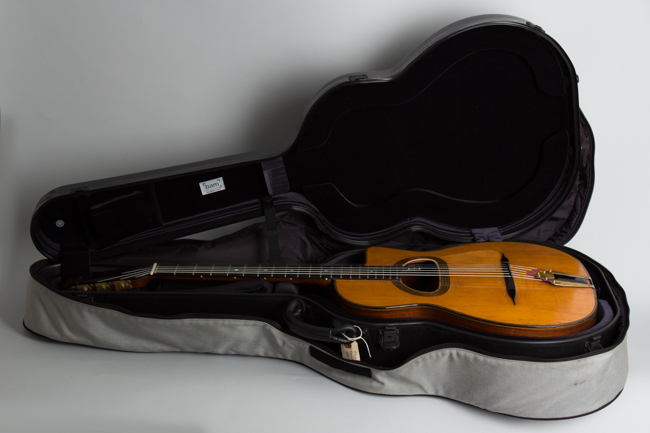 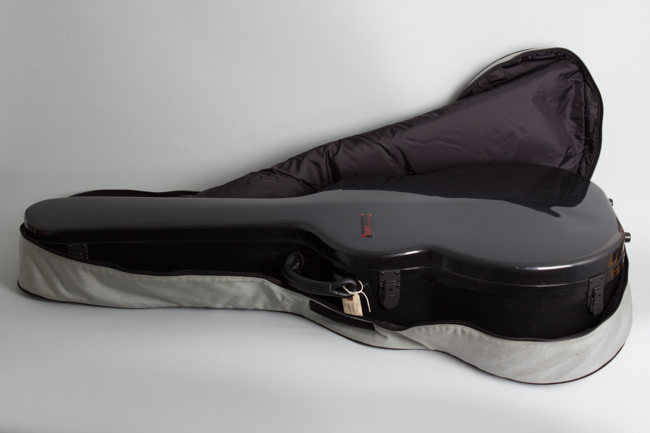 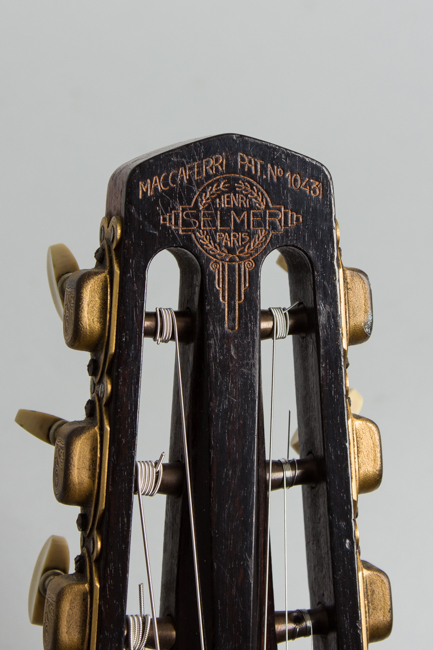 This is a wonderful first-generation Selmer Maccaferri "Modele Orchestre", one of the truly iconic guitars of the 20th Century. It is an unusually fine and original condition, a lovely example of the most celebrated steel-string ever built in Europe. These rare Selmer instruments are mostly associated with the playing of Django Reinhardt, and the design has been copied and expanded upon into the present day. Beyond this they are a unique and important piece of guitar history as well as fantastic instruments to play.

Italian guitarist/luthier Mario Maccaferri was wholly responsible for this completely original and then very futuristic design; he was able to persuade the French Selmer company to market them and provide factory space where he could oversee their manufacture. Due to the disagreements often seen between artists and businessmen his involvement ended after about 18 months, but Selmer continued to build guitars for years. The design evolved considerably after 1932 but this instrument (#163) was built during that first year and is the pure original Mario Maccaferri design. It bears his name and patent number on the headstock and label, which Selmer thereafter deleted.

The original Modele Orchestre (nicknamed the "Grand Bouche") was one of a series of Maccaferri introduced by Selmer in 1932. These included diverse classical, Hawaiian and 4-string versions as well as this best-remembered steel string. Macaferri himself was primarily concerned with the classical concert models; this steel string was more of an afterthought. The London Selmer store was particularly keen on this model and many of the first generation were sent there, not sold in Paris.

The Modele Orchestre is distinguished be a host of unique features including the arched laminated rosewood body and bent (not carved) spruce top. The walnut neck has a spliced heel and headstock and fairly wide ebony fretboard. The early models feature a 12th fret neck joint but upper fret access is facilitated by the unique stepped cutaway, a radical feature in 1932. Everything on the instrument including the tuners and tailpiece were custom designed, in-house Selmer creations.

Maccaferri's most elaborate original idea was an interior wooden resonating sound box under the large, D-shaped sound hole. This elaborate internal resonator was designed to enhance partials and even out variations in volume and tone between different strings, not unlike the 1920s Virzi Tone Producer championed by Lloyd Loar at Gibson. To this day its effectiveness is debated but its creator considered it a revolutionary improvement and patented it. The later Selmer "Modele Jazz" models built after 1933 deleted this feature.

Well under 1000 Selmer guitars of ALL types were built from 1932-52. This particular instrument dates to the first year, one of just about 200 made only some of which were the steel-string "Orchestre" variant. Many of the early models were in 4-string layout, or classical, or Hawaiian without a cutaway; the general estimate is perhaps less than 100 of this exact model were ever built.

Noted Selmer expert/dealer Jacques Mazzoleni sold this very guitar (#163) some time back and had this to say: "This guitar has quite a past. It was brought to the US in the 50s, bought in Paris from Joseph Reinhardt, who ran an ad in the paper to sell it. This is oral history, no reason for me not to believe an elderly person who got it from his friend. It has a more recent version of a pickguard (but) the top is whole underneath, and perfectly solid, the resonator intact as well. Its label is uniquely placed on the inside of the reflector; the guitar truly plays and sounds great." If this story is true this guitar may have been Strummed behind Joseph's brother Django on many occasions; his accompanists often preferred the slightly deeper "Grand Bouche" models to the "Petit Bouche" Django himself usually picked.

While today the Selmer guitar is universally associated with Django Reinhardt and "gypsy jazz" stylings from the 1930s into to the 1960s they were used by many diverse French performers in varied styles, everything from musette to the backing of chansonniers. In the 1930s Selmers sold in the UK were widely used in dance bands and associated with performers Len Fillis and Al Bowlly. Many were played hard, heavily worn and poorly cared for, so original condition survivors like this are quite rare. This is simply a beautiful and historic instrument in any context, a true 6-string icon that plays and sounds exactly as it should even 90 years along.

This is a played-in but largely original guitar, far better preserved than average for this often heavily used model. Many original Selmers were played virtually into the ground and/or heavily modified along the way. Well into the 21st century to find a "Modele Orchestre" from 1932 in anything like original condition is a distinct rarity.

This guitar's very thin lacquer finish appears all original and shows a decent amount of wear overall, although less pick damage than many. There are scrapes, dings and chips overall, with a several deeper scratches on the lower side waist and typical pick marks on the top, including an area worn well into the wood on the lower edge of the soundhole. The back of the neck is somewhat worn down to the wood from play along both sides.

The only notable alteration to the instrument is a small and very thin added pickguard made of wood veneer below the strings between the soundhole and bridge. This is likely covering an area of pickwear but is not so heavy as to adversely affect the sound. The very thin spruce top has a number of repaired grain slits; between the bridge and back edge are five of varying lengths above the tailpiece and one between the B and E strings. Another runs from the back edge of the soundhole almost to the bridge, about 1/2" above the low E string. The area between the D-hole and cutaway shoulder has two small grain splits as well. All have been sealed up with no notable overfinish. The top is very solid with some very slight bulging on the front treble edge of the D-hole.

There are a couple of very small patches to the laminated sides, one on the turn of the upper bass bout near the back and another tiny one nearer the waist on the treble bass bout; these spots appear to have been filled in many decades ago. Two small screw holes patched in the lower side waist indicate some sort of floating pickguard was once installed.

An unusual survivor on this guitar is the fully intact original internal soundbox, which has often been removed. The original tuners and tailpiece are intact; the enclosed machines have a loose feel but hold when tuned to pitch. The compensated floating ebony bridge is in the correct original style, but we suspect it is a well-made later reproduction based on comparison to the outer bridge panels. The fingerboard has been very neatly refretted with a new bone nut spacer.

While the above catalog of wear and tear may seem extensive, for a Selmer guitar of this period this is an excellent state of preservation. This instrument is wonderful to play with a truly sublime sound, offering immense projection in the higher register and a very incisive but never thin tone. While different in both sound and feel from the classic American guitars of this period The Selmer/Maccaferri is equally revered as one of the century's most original and influential designs, widely copied since but rarely if ever equaled. A high-grade fiberglass case and cover are included to keep this prewar Parisian safe on future adventures. Overall Very Good + Condition.
×