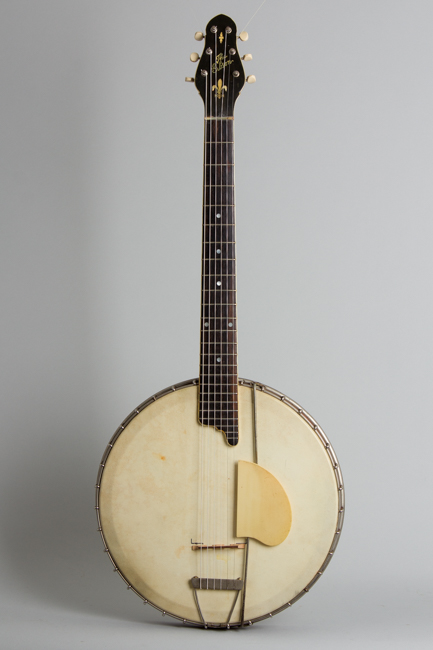 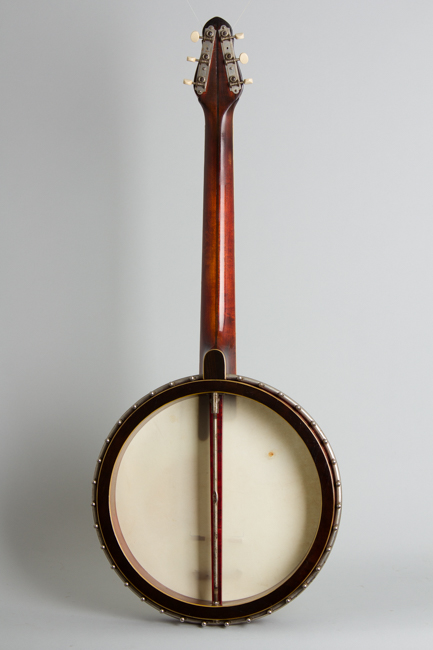 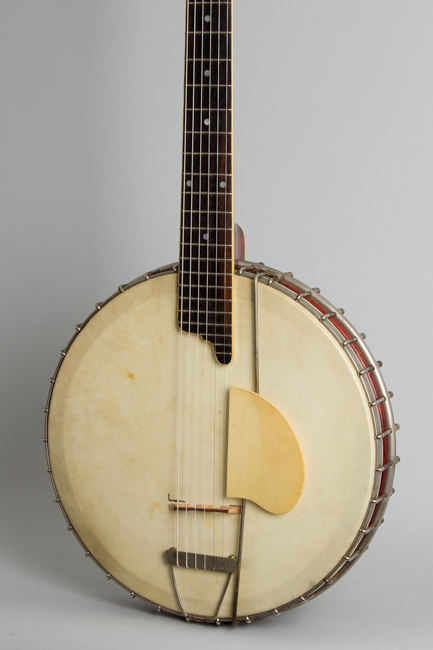 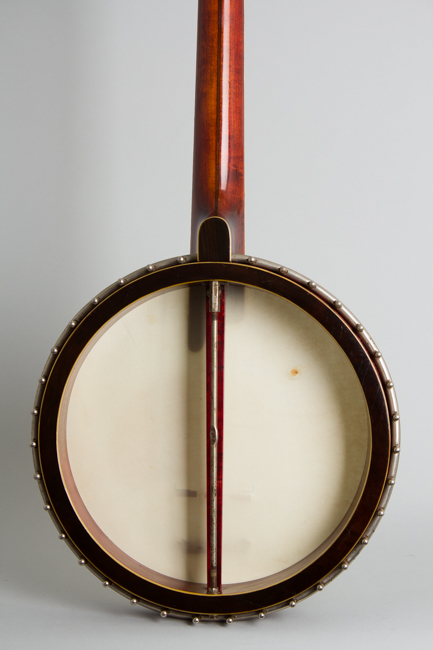 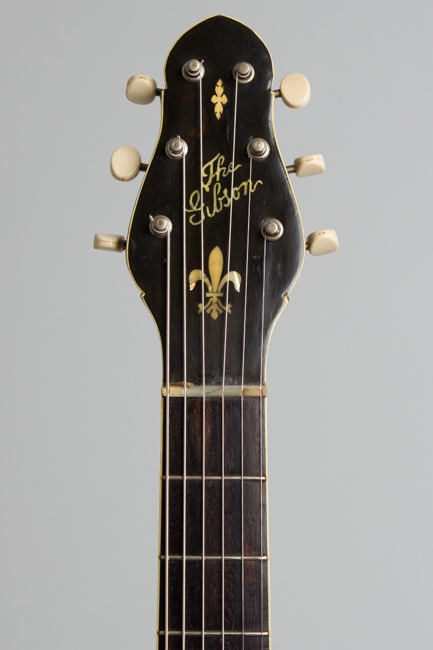 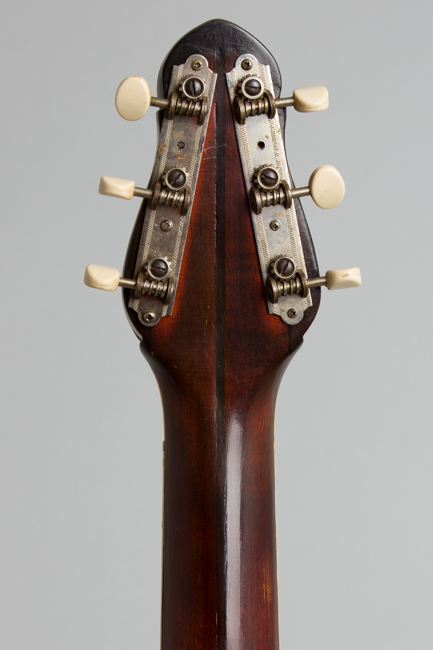 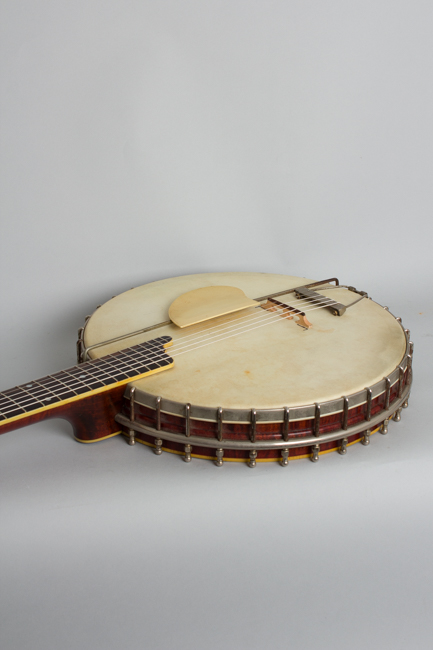 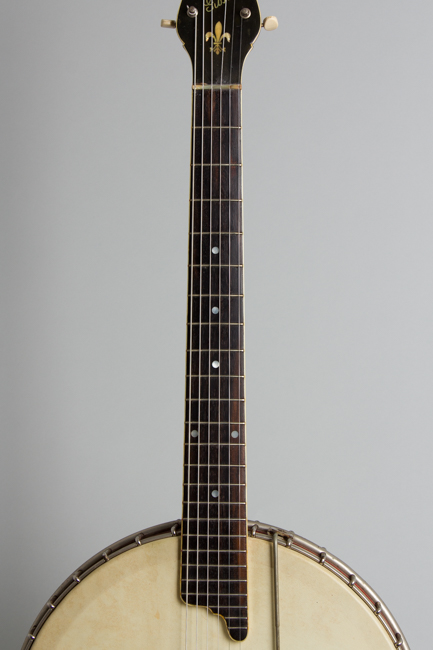 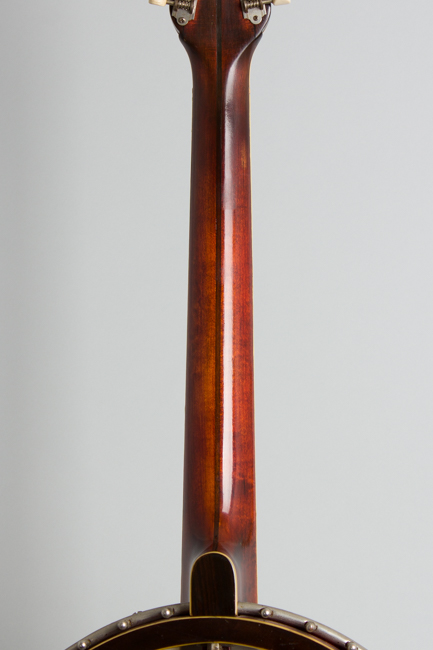 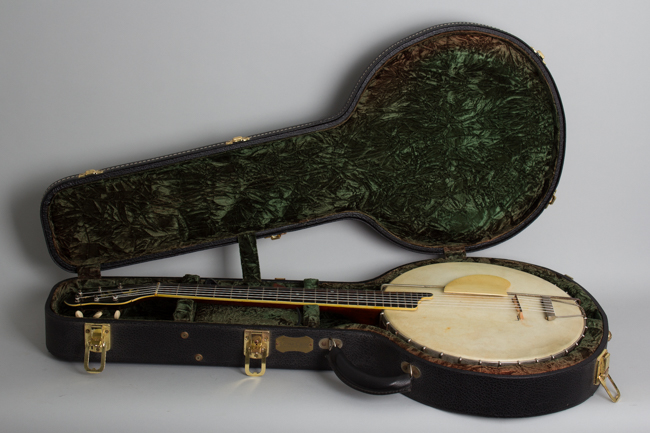 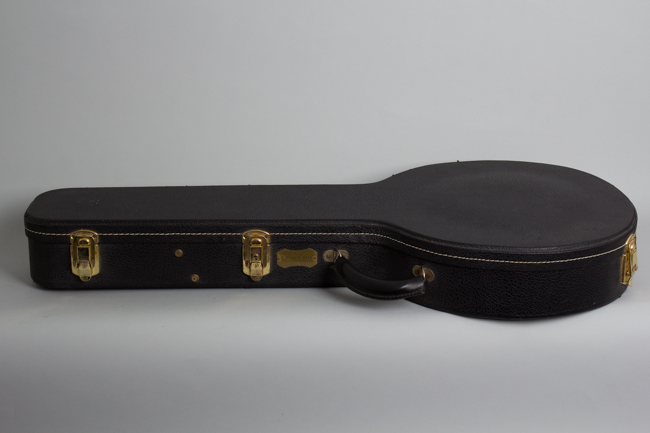 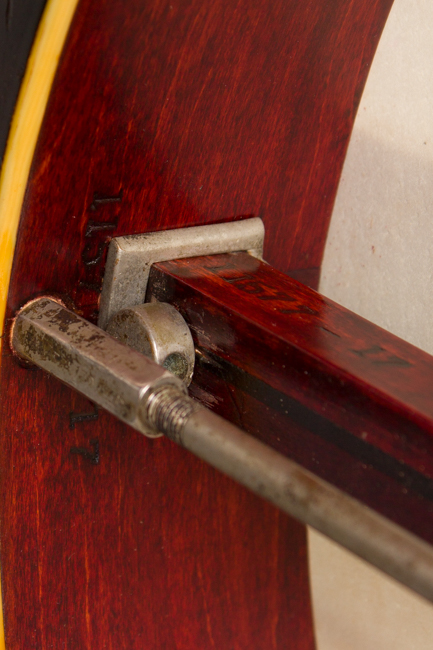 This is a somewhat re-worked but fine playing example of an imposing early 1920s creation most unusual instruments. It has been refinished (long ago by the looks of it) but most of its original character is still intact. The extremely impressive-looking "Style GB" banjo guitar is remembered by aficionados mostly as the instrument used extensively by pioneering African-American bluesman/songster "Papa" Charlie Jackson, the first self-accompanied solo performer to record in that idiom. Jackson's early Paramount records, highly influential in their time and still great listening today, are a showcase for the unique sound of this most interesting Gibson creation.

The early "Snakehead" "Style GB" was part of Gibson's initial banjo line, introduced in 1919 as follow-ups to the first "Style TB" tenor banjo which debuted in 1918. There were numerous structural variations of these instruments over the next several years as Gibson continually experimented, trying to create a banjo line sonically on par with their mandolins and guitars. In 1924-5 the whole original styled line was discontinued in favor of the "modern" Mastertone banjos, which is the Bluegrass-approved design Gibson is revered for today.

This transitional Style "GB" dates to 1922 by the now widely accepted Spann dating system and has a both a wooden dowel stick and a single adjustable coordinator rod. It pre-dates the "trapdoor" hinged plate resonator and the ball-bearing Mastertone tone ring that would appear over the next year or so. This early-style rim is constructed as a double-walled wooden honeycomb with hollow tone chambers, ebony capped and bound inside and out on the bottom.

These early Gibson banjos were quite expensive instruments when new, and the construction and cosmetics are rather upscale. The neck is laminated maple with an ebony center strip, originally finished in a graduated cherry-to-natural from the heel up. Both the extended ebony fingerboard and headstock are bound, and the unique "moccasin head" headstock is faced with ebony inlaid with a pearl "The Gibson" logo and fleur-de-lis.

With a huge partially hollow 14" rim, this early "GB" sounds quite unique with a darker tone than post-1925 models -- or most other 6-string banjos from any maker. This is actually quite a useful banjo-guitar; it sounds like neither instrument, exactly, but has a sort of ethereal plunk that sounds as if it is coming from somewhere long ago and far away!

This banjo remains in good playing condition, just about hitting its 100th birthday. It has an ancient semi-pro re-finish on both the neck and rim with a look that remains close to the original, with somewhat less red tone and a shinier surface. The headstock edges are more rounded off than they would have originally been. This shows some fairly light wear, mostly to the finish on the neck.

Much of the hardware is original, including the inner rim hardware, all-important oft-missing tailpiece and the eccentric optional floating pickguard. It has a full set of Fairbanks/Vega style hooks and nuts and later 1950s Waverly tuners. The plating has some typical wear overall. There are no really notable repairs evident; it is possible the seam on the back of the neck was re-sealed in places along the center lamination before the refinish and is completely solid.

The banjo is set up with an good quality older skin head riding somewhat low but solid, with a generic maple bridge and LaBella silk-and-steel banjo-guitar strings. The neck is in good shape and the frets remain original, with a bit of work done in the lower positions but not much wear. Overall this is a nice player's example of an early GB, with a good sound that is a bit brighter and a bit less 'plunky" than some we have had. It includes a later HSC. Overall Very Good + Condition.
×