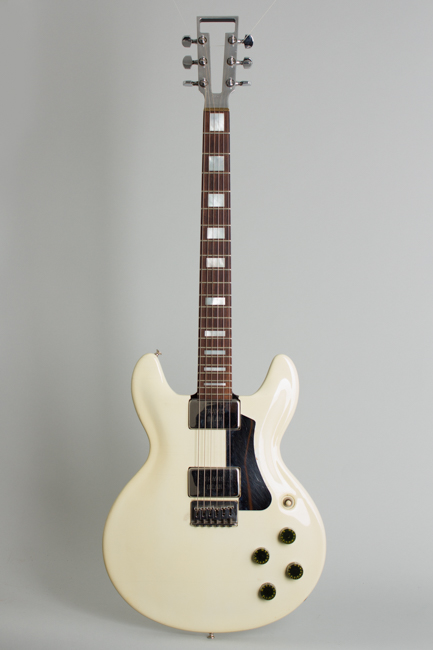 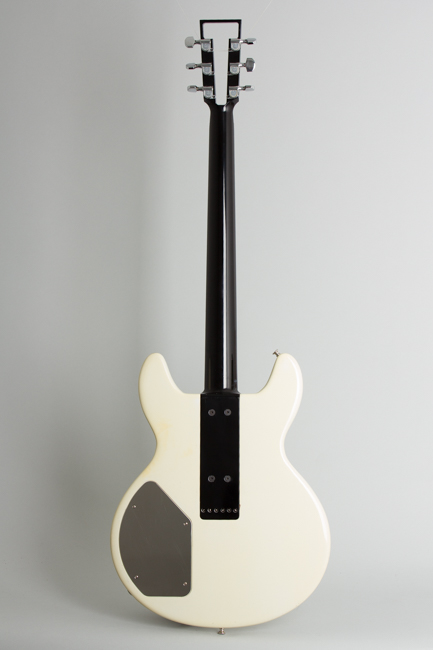 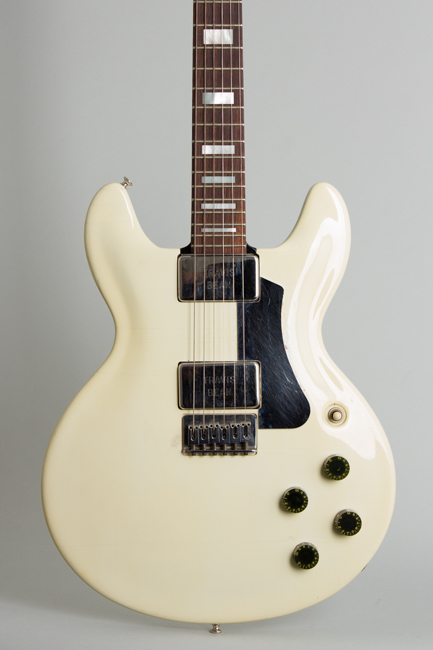 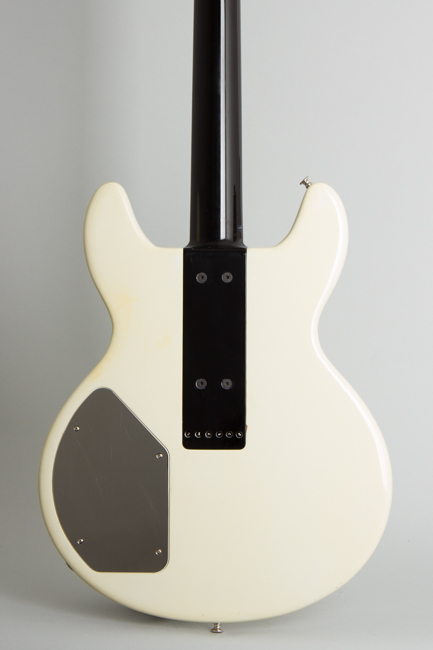 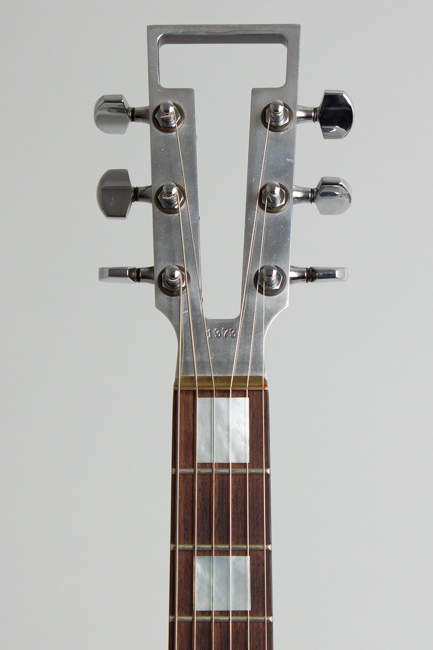 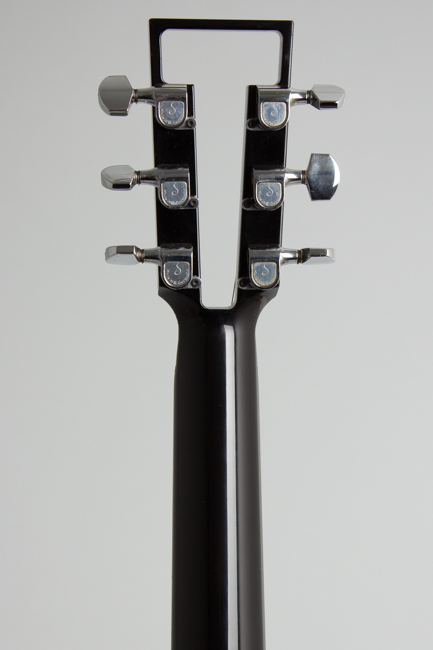 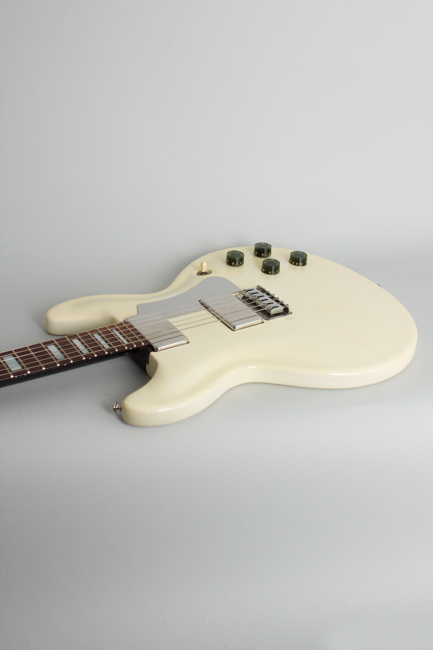 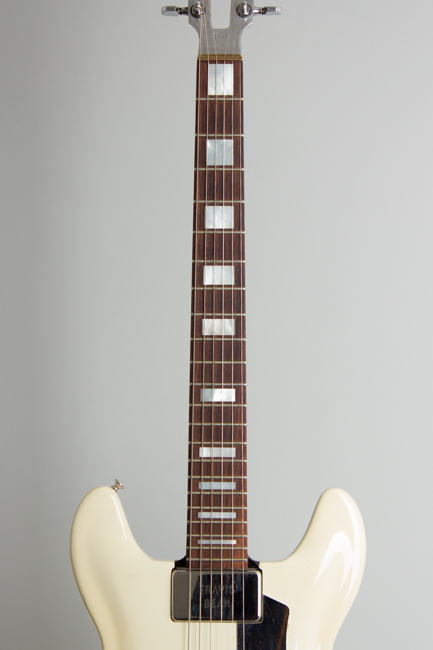 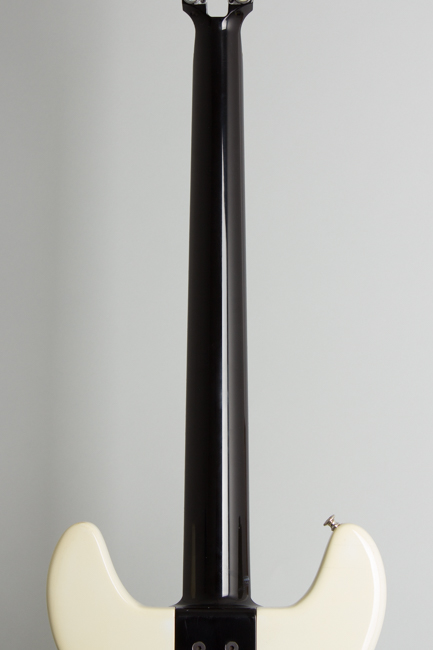 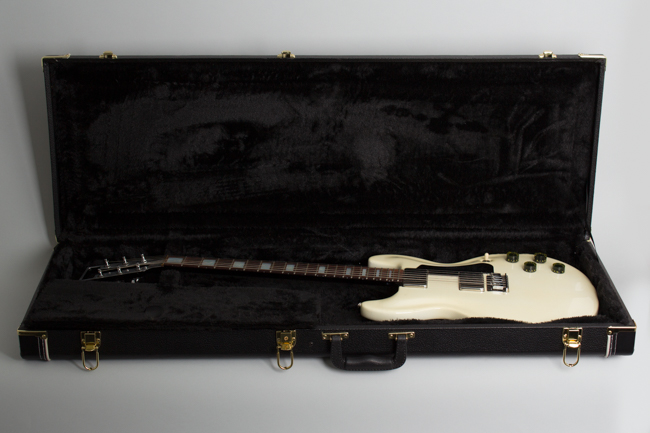 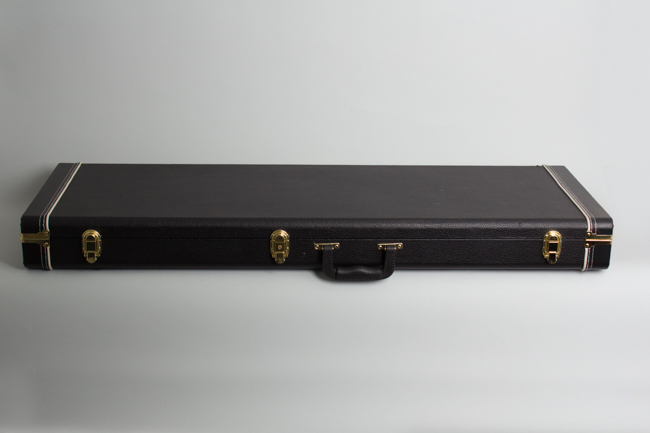 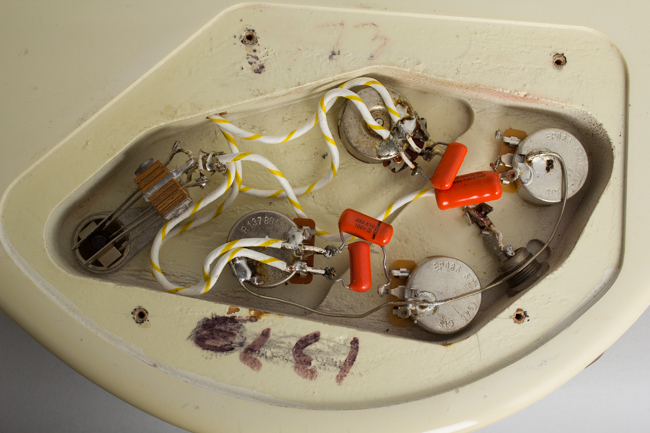 This very striking 1970's classic is a rare white-finished example of the Travis Bean TB1000A "Artist", the high-end model in the company's innovative but short-lived guitar line. It mates their patented raison d'etre aluminum neck/centerpiece with a carved solid body and pearl block inlaid rosewood fingerboard. The company also offered the "Standard" TB1000S Bean model, similar but less deluxe, the budget TB-500 and the eccentrically shaped "Wedge" models. Of these the TB-1000A is considered the "classic" Bean, the most widely recognized and fondly remembered of the bunch. The gleaming white example with a black-sheathed Imron neck is a fairly rare guitar; most Artists were natural.

Former motocross racer and lifelong tinkerer Clifford Travis Bean had two partners initially; guitar tech Marc McElwee and Gary Kramer, who would split off to found his own (for a time) successful guitar operation. The ads claimed their aluminum-necked designs were "the first new development in the electric guitar since the 1930s" although whether they were considering the early cast aluminum Rickenbacker steels is not addressed! The catalog continued "The...lightweight neck and receiver system forms a rigid link between the tuning machines and the bridge. When the strings are attached, a complete vibration connection is achieved. It is this patented chassis that makes the Travis Bean guitar what it is: an instrument that has become the most dramatic breakthrough in electric guitar technology in 50 years."

Bean's patented through-neck/central body core was milled from T6061 aircraft aluminum, extending from headstock to the through-the-body strung six-saddle bridge. Narrow chambers running its length improved resonance and reduced weight, if only slightly. This metal centerpiece is mounted into a slim solid wood body finished in white lacquer, a catalog option but in practice rarely seen. Standard, Artist, and Wedge models mounted the company's proprietary Alnico magnet humbucking pickups with "Travis Bean" engraved on their covers, the only branding on the instrument besides the subtle "T" cut out of the headstock. These in-house pickups offer exceptional power and clarity and have a stellar reputation on their own; they were never used on any other instruments.

Late in 1977 the company shut down temporarily in an attempt to reorganize. When they re-opened in summer of 1978, several production changes were implemented to cut costs and assuage common critiques of the guitars. The cutaway horns were widened and the bodies made almost half an inch thinner to reduce the weight. They also began using magnolia wood for painted guitars instead of beautifully figured (and expensive) Hawaiian koa.

A coating of Imron paint on the neck was introduced as an option in response to the frequent complaint that bare aluminum felt cold. The heavy sprayed coating was designed to feel "warmer", more like a finished wood neck. The fingerboards (which were previously typically a slab over a hollow neck with a support rib down the middle) switched to a two-piece fingerboard supported by a thin piece of aluminum underneath and featured a very slight radius.

This guitar carries serial #1373 stamped into the headstock and includes these changes; the original customer went out of their way to select the fairly rare combination of a white finish body with the Imron coated neck. The electronics rig has one remaining original pot with a visible date of 1977; the other volume pot was replaced long ago and the tone pots are more recent. The pickups, caps and other wiring remain original. The body is thinner and sleeker thicker than earlier examples, resulting in a somewhat handier guitar. The rosewood fingerboard has pearl block inlay and a brass nut. Schaller tuners, a fully adjustable bridge and small aluminum pickguard complete the hardware.

This model retailed originally at $1,395, making it one of the most expensive late-70s solidbody guitars. While not a huge success they were featured by some major artists including various Rolling Stones; Bill Wyman even had custom short-scale basses made for him. Jerry Garcia played both a TB 1000 and a TB 500 for a time, models which many deadheads still revere to this day. The guitars garnered a reputation for very high quality, but many players felt the aluminum neck had a cold and clinical feel. This later Bean is lighter and somewhat handier than the earlier examples, and a very fine player.

More recently, Travis Beans have been gainfully employed by a number of noise-rock players along with many denizens of myriad heavy sub-genres like doom and stoner metal. The Bean sound is powerful and articulate at lover volumes, but winds up magnificently to a shuddering crunch when pushed. This starkly industrial looking ivory-and-ebony Bean would be a spectacular instrument in this context, both in looks and sound! Travis Bean knew he had something great in the mid-1970s; while his vision did not lead to major commercial success at the time he would no doubt be well satisfied by the lasting appeal to players and highly collectible status his creations have earned 45+ years on.

This guitar remains mostly original, showing some minor restoration and light wear but no abuse. The white lacquer body finish shows minor checking and some small scuffs, dings, dents overall. There is a touched-up wear spot just over the bridge that is not quite level. There is some chipping and errant marks below the pickguard, which is a correct style replacement done by the Electrical Guitar Company, keepers of the Bean flame. Apart from that there are no large areas of wear. The back has one small chip on the edge of the neck centerpiece.

The metal surfaces show some very light wear, most notably scuffing to the pickguard. The back of the Imron-coated neck is very clean with no major dings or dents into the surface. As noted three of the four pots are later, one remains original along with the wiring. The pickups are original and undisturbed.

The guitar has been neatly refretted and appears to have had the fingerboard trued; these frets show some very minor wear in the lower positions. This metal-neck marvel plays excellent and sounds truly fantastic, even unplugged. And with its white, black-and-metal livery this is a visual stunner, about as badass a 1970s vibe as you can get while still appearing absolutely contemporary. The guitar is housed in a modern HSC. Excellent - Condition.
×