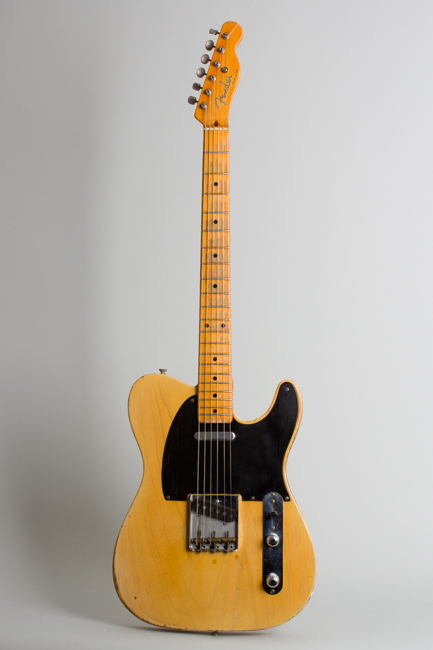 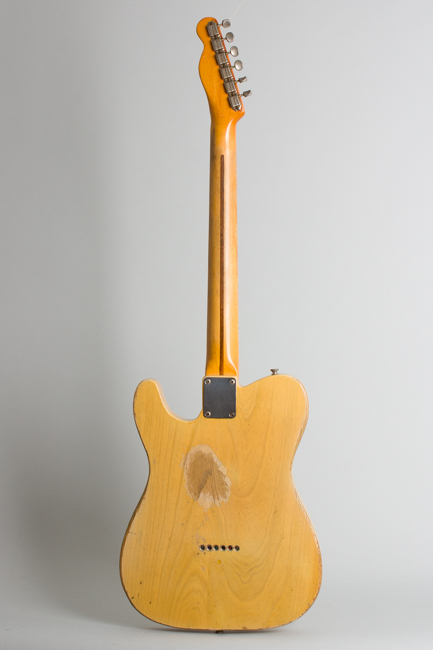 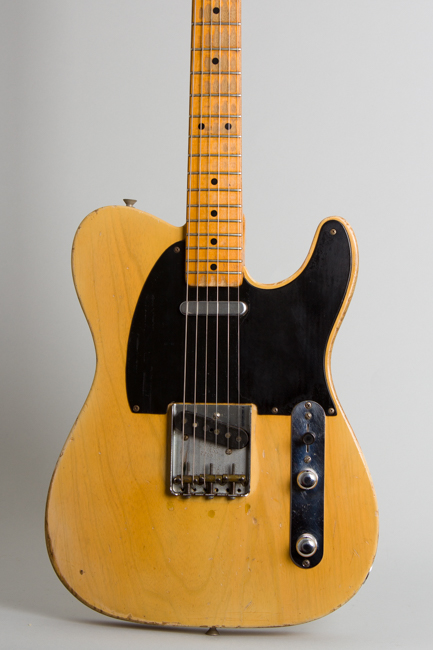 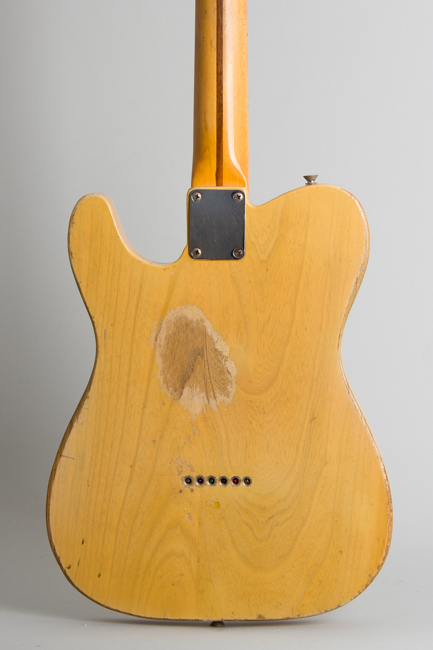 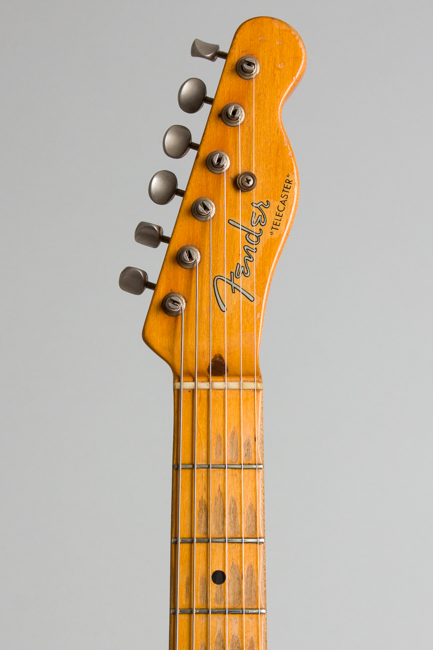 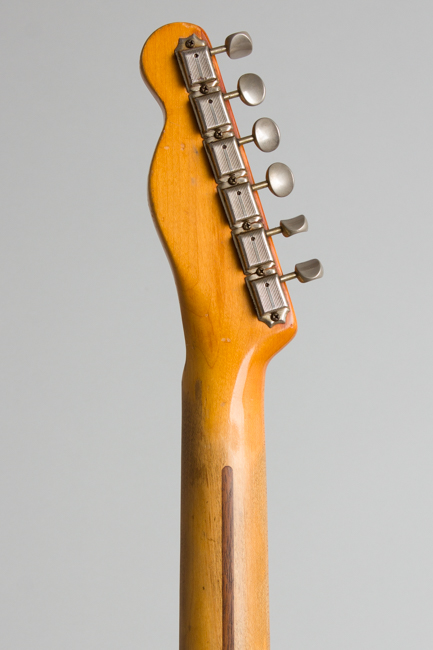 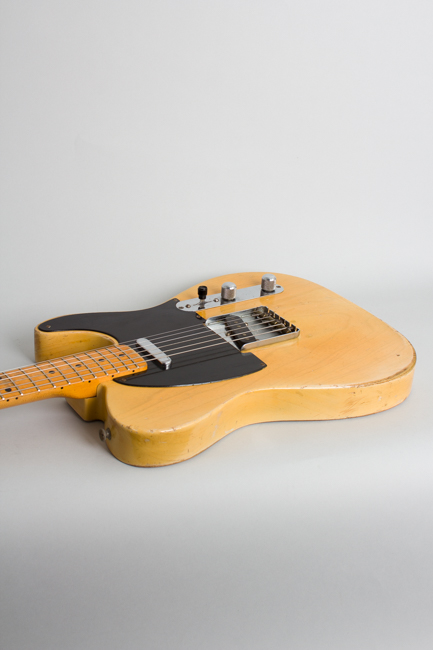 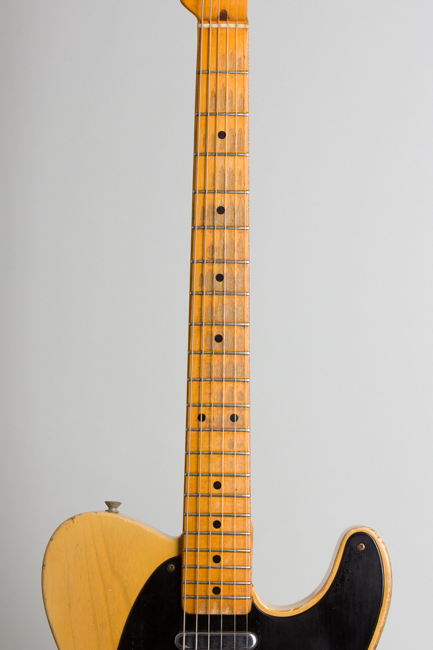 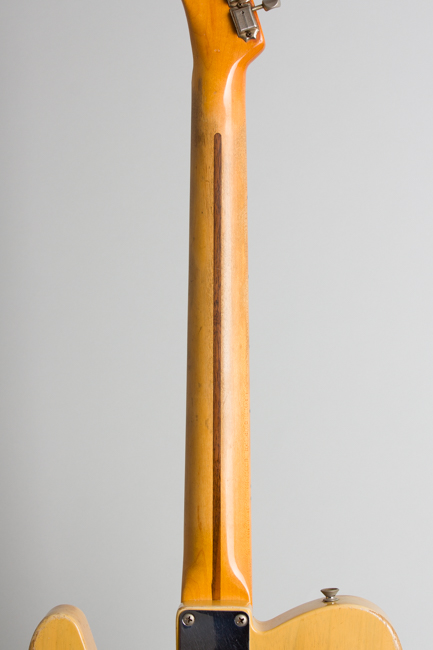 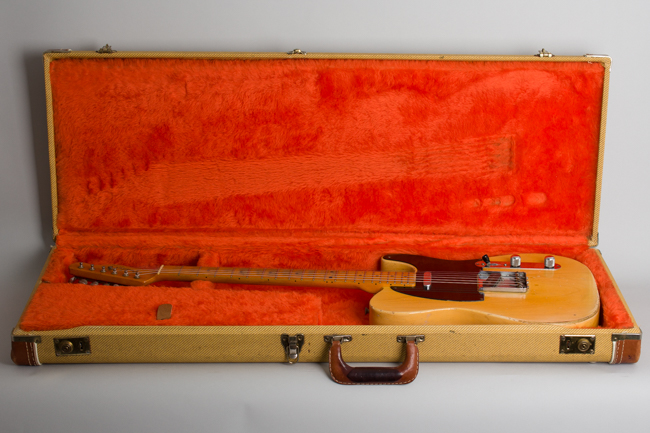 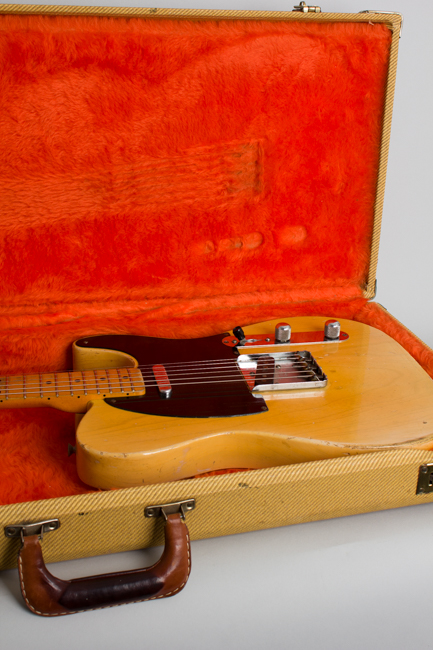 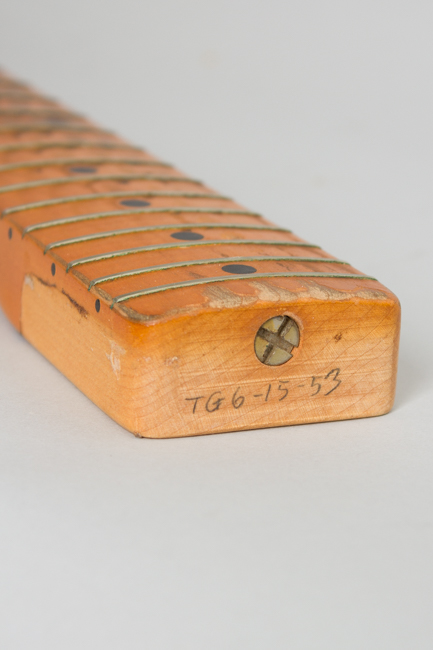 This is a well used but still beautiful "Blackguard" Telecaster -- the guitar that put Leo Fender's company on the map for all time. It was built nearly 70 years ago just as the company was moving up from their original cinder-block factory in Fullerton, California in the summer of 1953. The classic '52-3 Tele features: one-piece maple neck, aged "butterscotch" blonde-finished ash body, lacquered black fiber pickguard, brass bridge saddles, and of course the original black-bobbin hand wound pickups with a sound for the ages are all present.

This guitar carries serial number 2209 stamped into the bridgeplate, with a neck marked TG 6-15-53 in pencil on the heel by renowned Fender craftsman Taddeo Gomez. The body has 6-5-53 penciled in the neck pocket, with "Eddie" written beside it (Eddie made a lot of blackguard bodies). The masking tape strip in the control cavity indicates the electronics were installed by Mary on June 15 of '53. These dates are closer than many; the 10-day-old body was being wired up the same day the neck was made. Perhaps Fender sales had a spate of orders in summer '53 the factory was pushing to complete! The die-stamped date code on the tone pot reads 304-221 designating the 22nd week of 1952, the volume pot has a partially covered ink stamp of 140-233 from the 33rd week of the same year.

The instrument shows one odd if fairly inconsequential alteration, but all parts remain original. At some point in the distant past there was an attempt to mount some sort of tailpiece or vibrato, leaving three screw holes now filled in just behind the bridge. The rear flange of the bridge plate was notched to allow the strings to feed through it; nothing else was altered. Fortunately the bridge plate itself was not replaced as of course it carries the serial number.

The original early-style electronics rig has not been re-wired to the "modern" Telecaster switching scheme, but the bass-heavy "mud cap" is not engaged. As originally set up the "deep bass" capacitor acts on the neck pickup in switch position # 1. Now the neck pickups sounds the same in the first and middle position with a functional tone control, while the bridge pickup is engaged in position #3. The two pickups can be combined by very carefully setting the switch between #2 and #2. This could be restored to original or altered to modern switching depending on player preference.

The very comfortable neck has a lovely "C" profile, round-backed but with just a bit less of a rounded "throat" in the lower positions than the typical '52. The screws are mostly Phillips-head as is customary for 1953; the bridge has its brass saddles notched under the outside ends to make lower action setting easier, another 1953 refinement. This one is fairly light for a '53 at just over 7 Lbs. and the body has some nice grain figure showing.

For many, '53 is a classic Telecaster year, with the look and feel of the earliest Fender Broadcaster and "No-Caster" guitars from 1950-51 but more consistent production standards. Before the introduction of the Stratocaster in 1954, the Tele and Precision Bass were the company's most innovative products, already causing a revolution in playing styles and shaking up the guitar world in a big way. The Telecaster was totally unique in look, feel, and sound, and became instantly popular, particularly with country players. In the years since, many players and collectors have come to consider the 1950-54 Telecaster the finest electric guitar ever made as well as one of the most historically important.

In his authoritative and beautiful book "The Blackguard", author Nacho Banos calls '53 "The year Fender got it nailed...Collectors and players alike consider 1953 a cornerstone year for the Blackguard. Some of the most legendary artists associated with Telecasters have used guitars manufactured during this pivotal year. Red Volkaert, Roy Buchanan, Danny Gatton, early James Burton, Keith Richards, Albert Lee, Arlen Roth and Countless others". Early Fender Telecasters of this period are universally considered among the most collectible and historic of all electric guitars, and even retaining evidence of some midnight experiments in its past this is a lovely example.

Overall this is a nice example of a "summer '53 Blackguard" showing some typical wear and tear and the one quizzical if not overly conspicuous alteration to the bridge plate. The all-original thin lacquer body finish has ambered and checked lightly and shows typical dings, dents, scratches and worn spots, especially as usual to the edges most prominently the lower back rim. The face is cleaner than many with none of the common 'pinky wear' below the bridge. The only large area of loss is one belt buckle spot on the center/lower back, and the three small holes patched in the top are visible.

The finish on the back of the neck is smoothly worn down to the wood over a good portion of its length with a few scattered dings and dents. It has the classic very smooth "worn-in Fender" feel in spades! The fingerboard has quite a few shallow wear spots through the finish into the wood in the lower positions, with spots worn through the finish running higher up the board past the 12th fret. This one has been played for sure. Still there no overspray to the neck as is often found. The guitar retains the original small frets which have been crowned down more than once show some minor subsequent wear but are still quite playable. The bone nut appears original with some patching under a couple of strings. In the neck pocket the upper ends of the four mounting holes have been enlarged slightly, why we don't know but the neck attachment is still unaffectedly solid and stable.

All external hardware and internal component appear original; The "mud cap" has not been removed but is not audibly acting on the front pickup. The pickguard has wear through the lacquer in the area below the strings and a spot above them where it looks like two strips of tape or Dyno label were once stuck on. The bridge saddles show typical corrosion and discoloration but nothing is rusted hard and all adjustment screws are functional. The original "ashtray" bridge cover is missing, and as noted there are notches cut for the strings through the back flange of the bridge plate. Three patched screw holes in the top just behind the bridge are also evidence of *something*. We don't know what a previous owner attempted here, it is long gone but a few scars remain.

Other than this one quizzical modification and the instrument remains pretty much as it left Fullerton in summer '53, well used but with less wear from hard gigging behind it than many. Whatever indignity it once endured, this is a lovely sounding guitar with a deeper slightly mellower sound than some that still twangs with authority in the bridge. It is housed in a later (1980s) Tweed case. This Telecaster has been owned by the same player for decades now, who comments: "It's funny to call this guitar a "player" (today), but looking back that was absolutely why I bought it, it was far and away the best playing one I had found, and I did play quite a few." Overall Excellent - Condition.
×