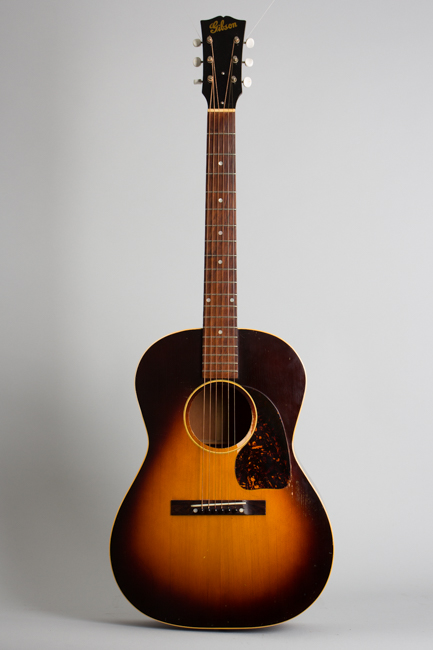 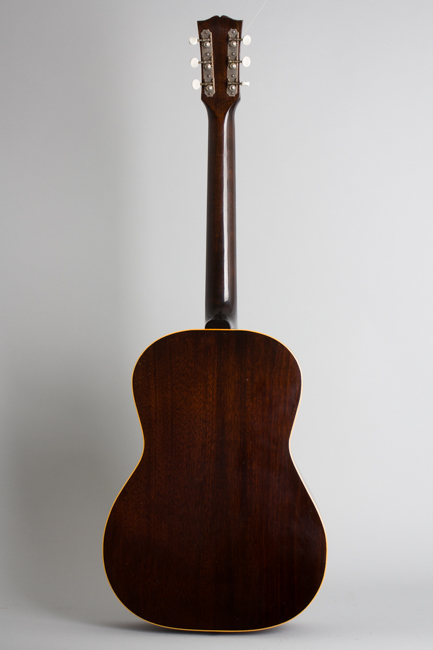 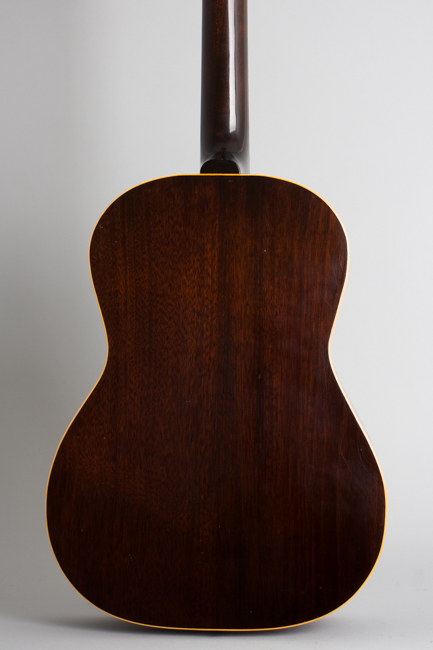 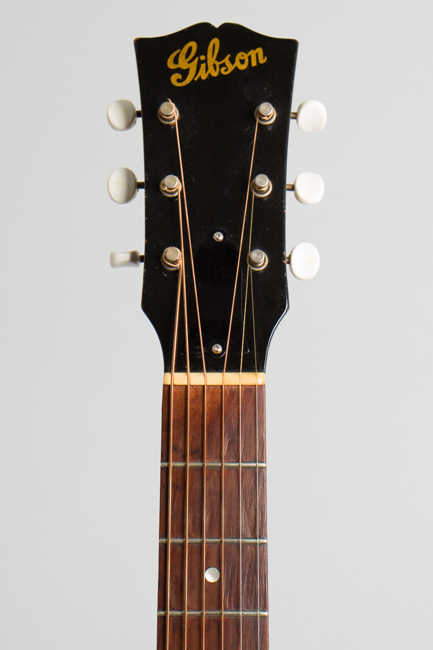 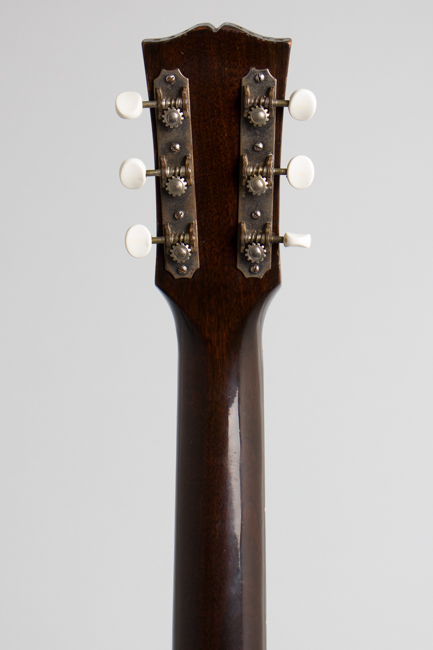 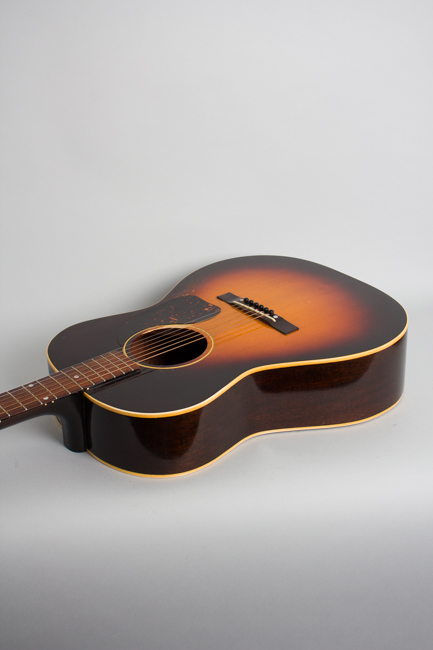 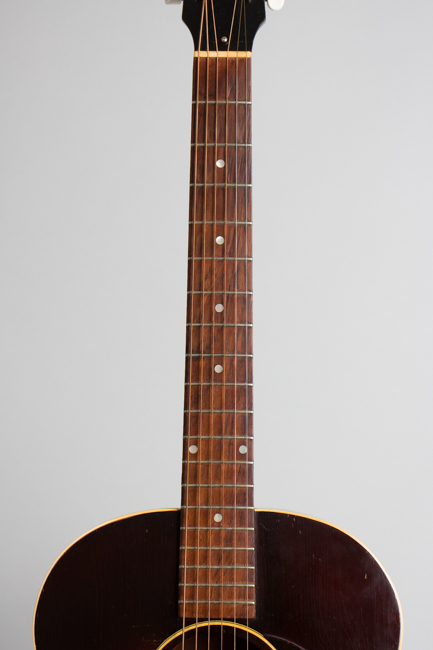 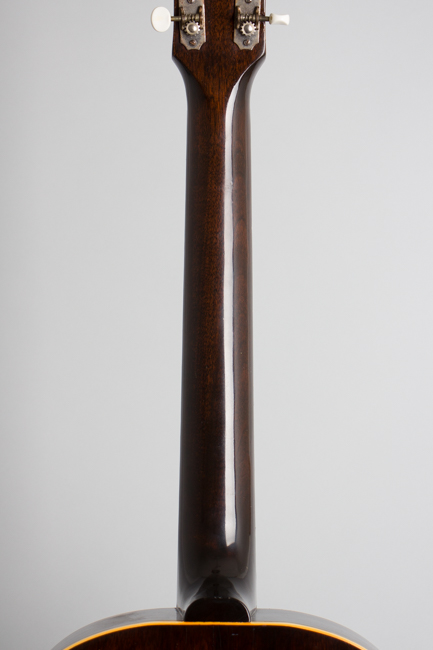 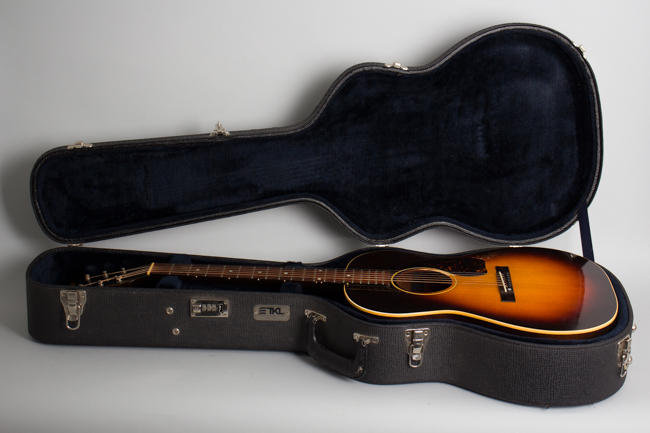 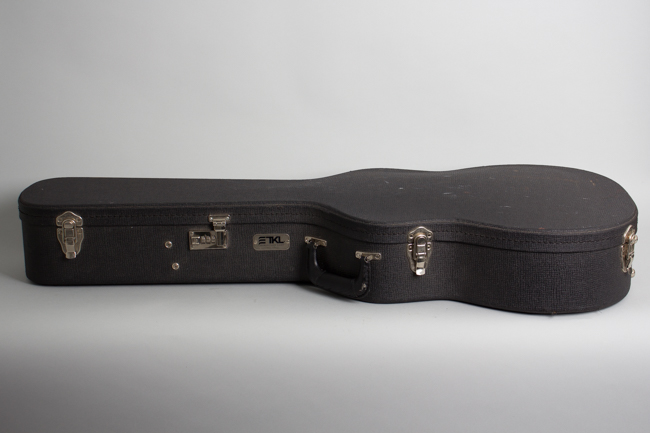 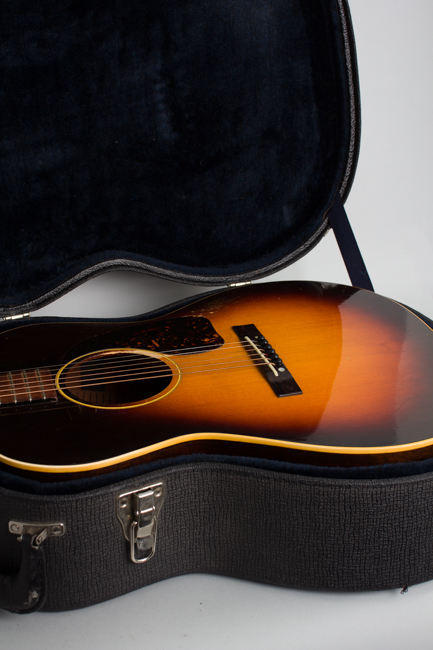 This is a fine just post-WWII example of Gibson's most popular smaller body flat-top guitar model from the 1940s and '50s, the LG-2. It was the middle model of a three-instrument line with the externally identical but ladder-braced LG-1 below it and the natural-finish LG-3 positioned above. Exact production figures from this period are lost, but in 1948-50 the LG-2 sold roughly 1000 instruments a year, with more than double that amount of LG-1's shipped. These first post-war ones like this are somewhat scarcer than later examples, suggesting they were built in smaller numbers as Gibson was just getting back up to speed after doing mostly war work for 4 years.

For some reason lost in Gibson history these 1946-48 flat tops have no serial or factory order numbers, so can only be dated by the features. This one appears to be a fairly early example bearing the old gold script logo that disappeared by 1948. Other typical features include a fairly orangey sunburst top finish, dark mahogany back and sides, small tortoise celluloid pickguard, small rectangle bridge and single-bound top and back. The headstock is tapered in depth, still with WWII pattern riveted-gear Kluson tuners fitted. The truss-rod equipped neck has a lovely round-backed "C" profile, substantial feeling retaining much of the girth of the thick wartime "baseball bat" style but still quite comfortable. This is a smooth sounding and versatile guitar; generally well preserved and a fine example of Gibson's early post-war flat-top period.

This is a very nice example overall, showing some isolated wear to the top but not appearing to have had too much play time since before the Korean War! The original lacquer is still shiny maintaining the original strong color to the sunburst, with some typical checking and a nice original patina overall. There is really notable wear only to one spot, on the lower soundhole rim through the lacquer into the wood. The area just below the back edge of the pickguard has some deeper dings and pick marks, other than this the face shows just small dings, scuffs, and other minor marks.

The rest of the guitar has only very minor wear; the back of the neck is extremely clean. The headstock edges show some small dings. There is a bit of wear to the fingerboard and original frets but not enough to affect play. The only visible repair is a somewhat jagged crack on the lower side at the turn of the lower bout; this has been solidly sealed with some minor touch up. There are no other cracks on the instrument.

The neck has never been reset; the original bridge has been lowered somewhat with a new saddle fitted, the original small maple bridgeplate and retaining bolts are still fully intact. The original tuners have been neatly re-buttoned. There has never even been a strap button added. This is an really excellent playing and sounding instrument, quite powerful sounding for a smaller-bodied guitar and despite the one wear spot generally better preserved than most from the 1940s. Overall Excellent Condition.
×