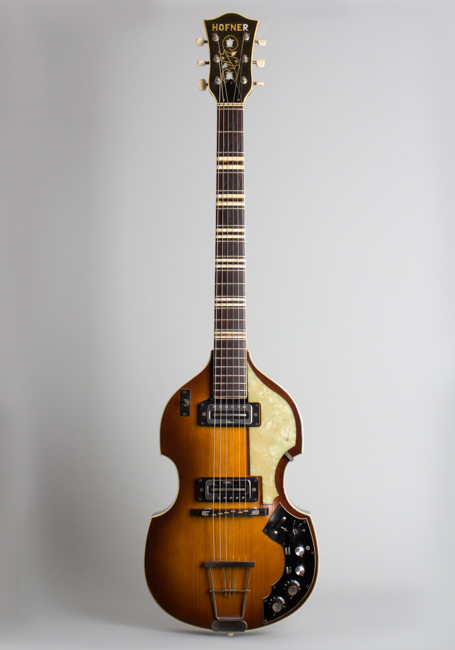 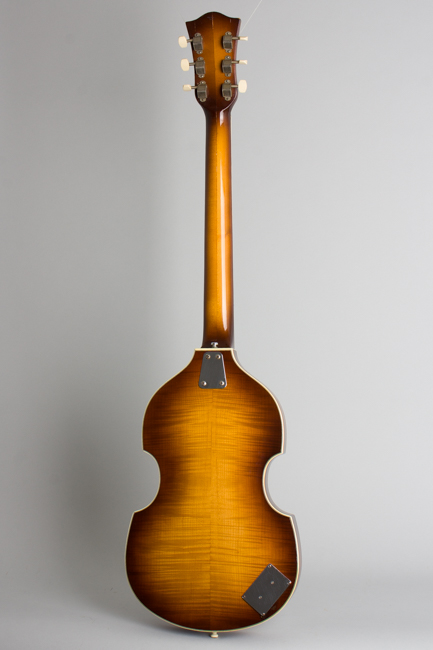 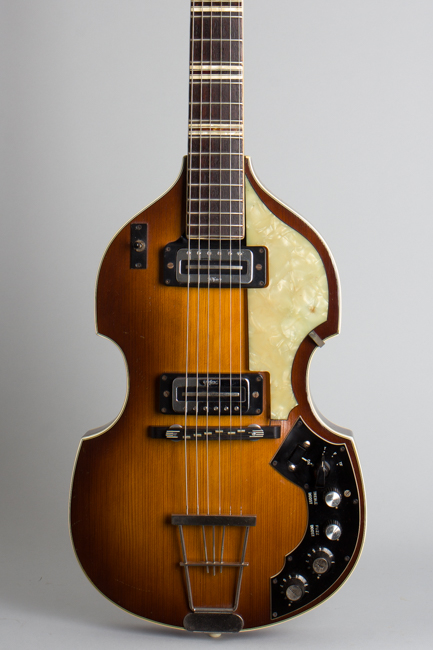 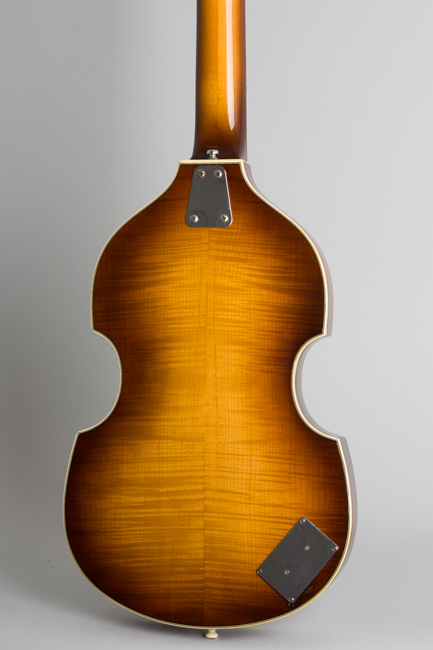 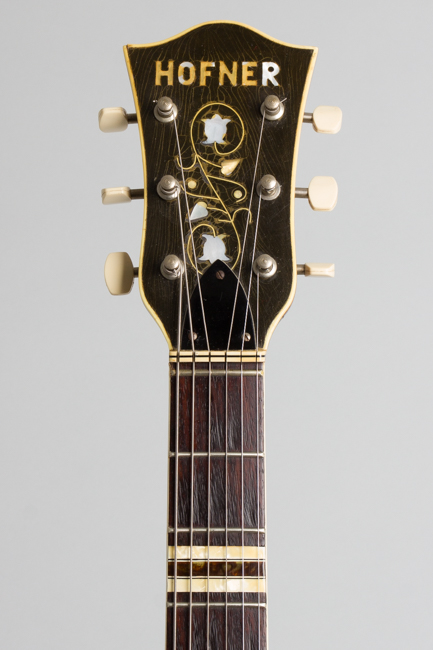 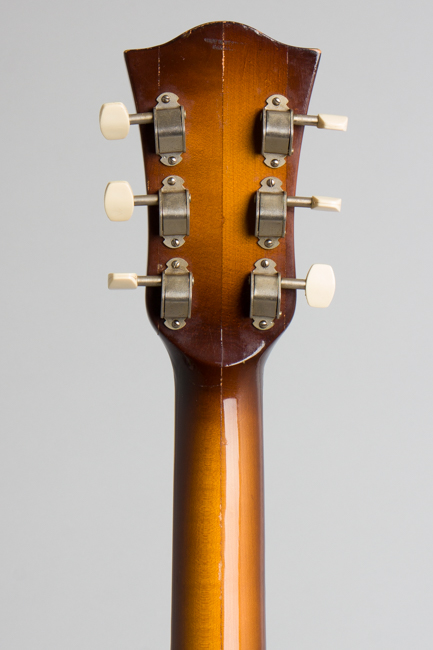 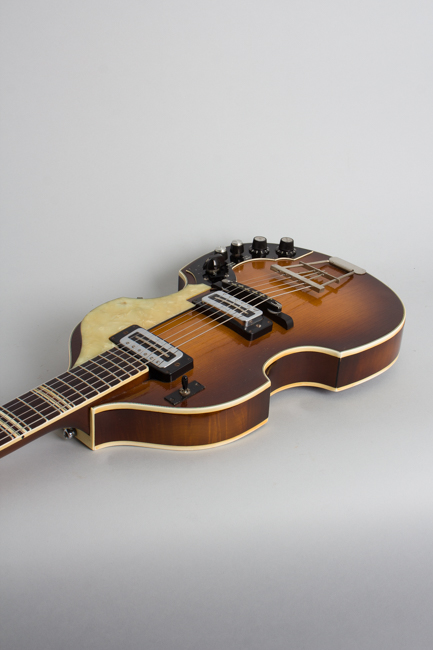 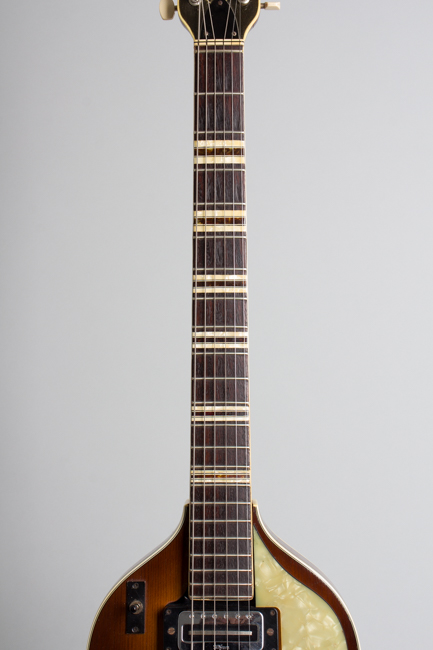 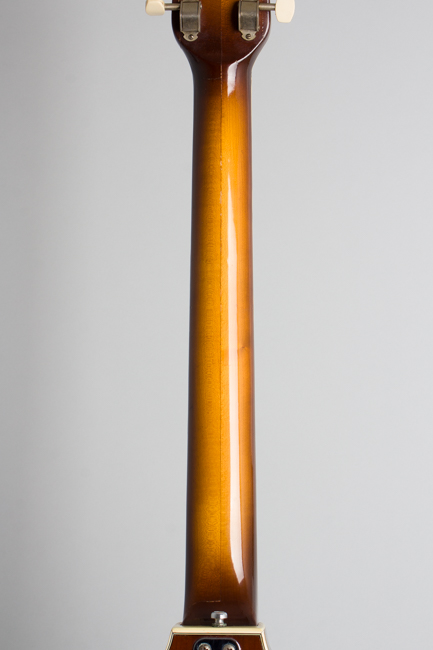 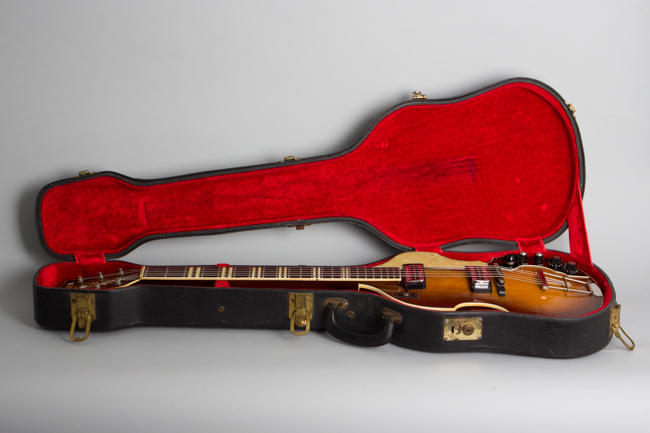 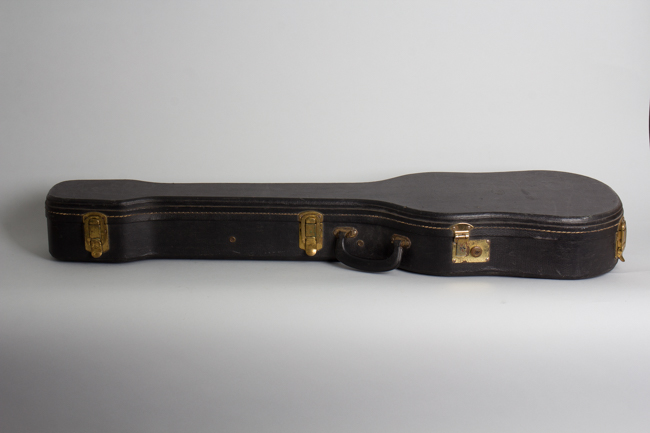 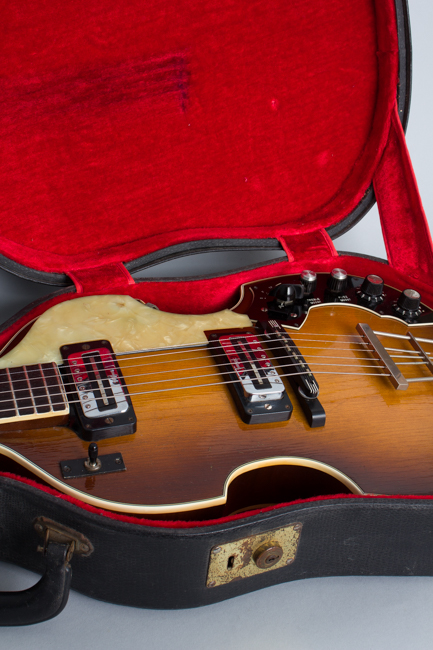 By the late 1960's nearly everyone loved the Beatles and by extension the already iconic Beatle bass, or so Hofner reasoned. "The tremendous world-wide popularity...demanded a guitar with similar body shape, weight and playing qualities" the company announced in 1968. And when they decided to put out a guitar version, to make it even better they loaded it up with the active effects just becoming the "now" thing in 1968. A vaguely violin shaped guitar with a built-in fuzzbox? Done! How about adding a really gnarly treble boost? You got it! Who wouldn't want that in 1968 for a US list price of $395?

The Model 459 TZ was the result, actually a very handy and playable guitar. It is rather fancier than the classic 500/1 bass; the bound headstock has a block pearl Hofner logo and pearl floral inlay. Another more deluxe features is the unusual "bar" fingerboard inlay made of alternating strips of different colored plastics. The body is laminated maple with a spruce top, the neck a two-piece maple laminate with a bound rosewood fingerboard.

The electronic rig features the new "blade" pickups that Hofner introduced at this time, with tiny adjustable pole pieces and a central metal magnet strip contoured like the fingerboard to prevent loss of signal when a bent string moves away from a pole. Hofner also did away with the Beatle Bass' confusing 3-switch control array in favor of an extended black plastic panel on the lower bout with the effects controls and a simple tone and volume for the straight guitar.

The onboard effects take this guitar to another level of 1960's hip-several companies tried stuffing the pedals into the guitar, but this is one of the more successful applications of the idea. The fuzz circuit is deep and rich, with a decent amount of level control to go from simply snarly to the edge of sonic maelstrom. The treble boost is rather ear-scorching when cranked, but combines well to add edge to the fuzz. A 9-volt battery is inserted from the back under a metal trap hatch to power this setup.

While perhaps not Hofner's most memorable achievement the 459 TZ is super handy and rather nifty little guitar (there's a period word for ya). It actually sounds great, with a fairly wide tonal range and is quite resistant to the feedback that plagues many hollowbodies at higher volume. AND that's without considering the rip-roaring fuzz box built right in! This model was not seen much in the 1960's -- Al Nichol of the Turtles had one for a while -- but it is a very playable relic of the era, a cool combination of old-world design and psychedelic ambition!

Overall length is 39 7/16 in. (100.2 cm.), 11 1/8 in. (28.3 cm.) wide at lower bout, and 2 in. (5.1 cm.) in depth, measured at side of rim. Scale length is 25 1/4 in. (641 mm.). Width of nut is 1 11/16 in. (43 mm.).
Overall this guitar is nicely clean and all original. The finish shows some typical checking mostly to the spruce top but does not have much wear apart from some minor scuffs and scratches. There are no repairs or alterations and even the period active electronics are original and work as they should. The fuzz and treble boost effects are attractively ratty and a bit noisy in operation but this is 1968 here, folks; even the period's classic floor pedals added a lot of sizzle to the mix.

The neck is nice and straight and as it is bolted to the body the standard Hofner neck angle/heel issues are completely avoided. The laminate seam down the center of the back of the neck is feelable but not open at all. The pickguard has one small spot of celluloid distress on the face that has been stabilized does not appear to be going anywhere. The original frets have had a recent polish out and show very little subsequent wear. The guitar handles great and plays very well, and the effects are surprisingly useful. The guitar comes in the original shaped US-issue shaped HSC, which added an extra $60 to the price in 1968 so is often not present today. Excellent - Condition.
×