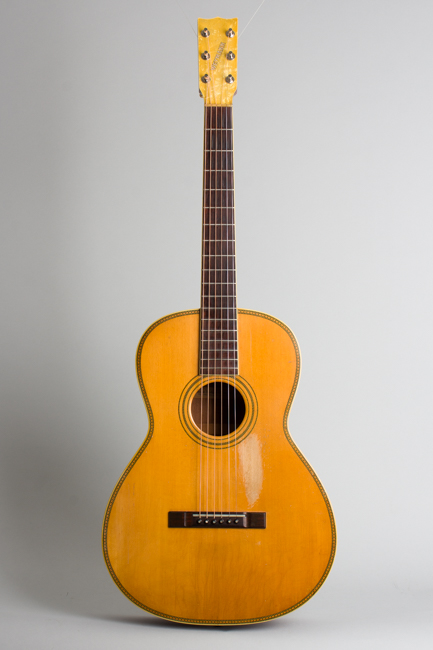 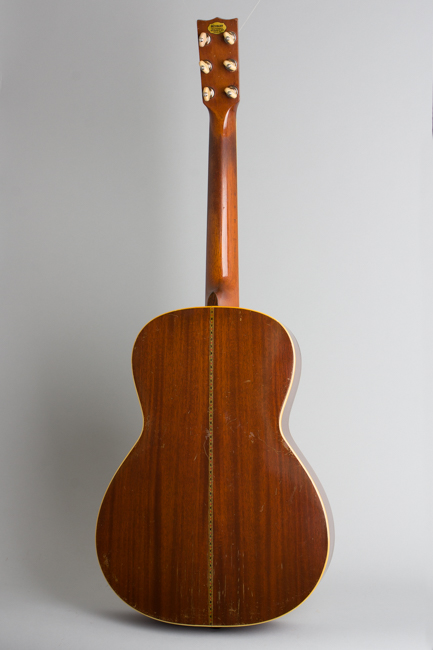 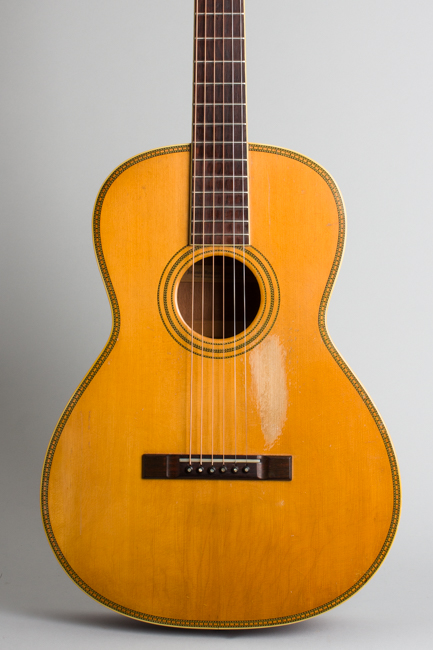 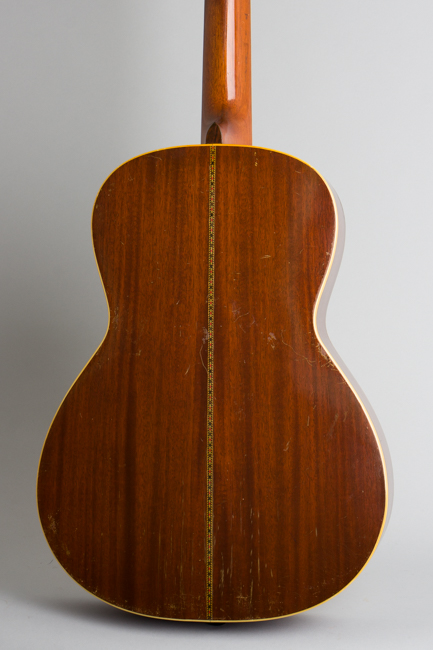 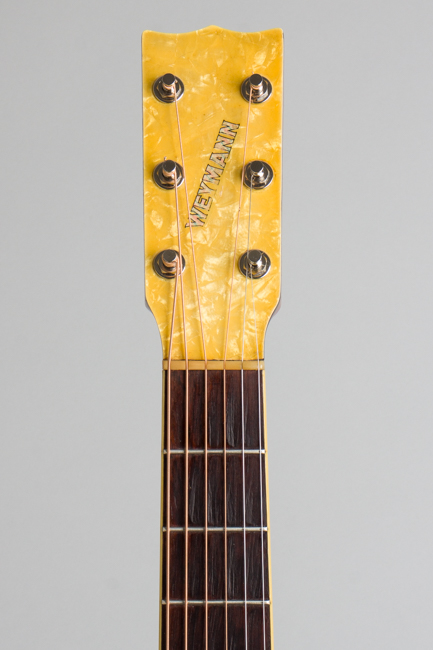 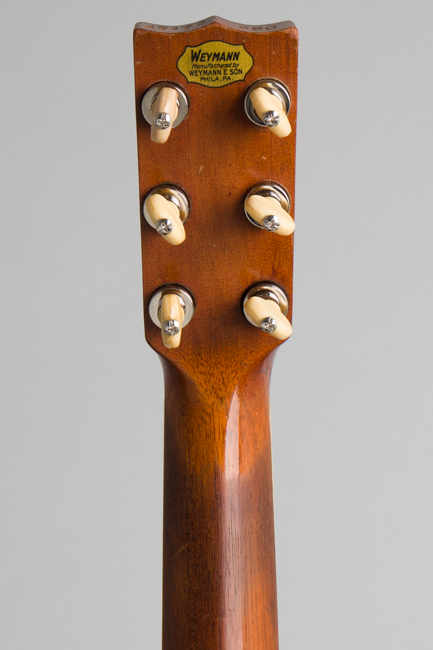 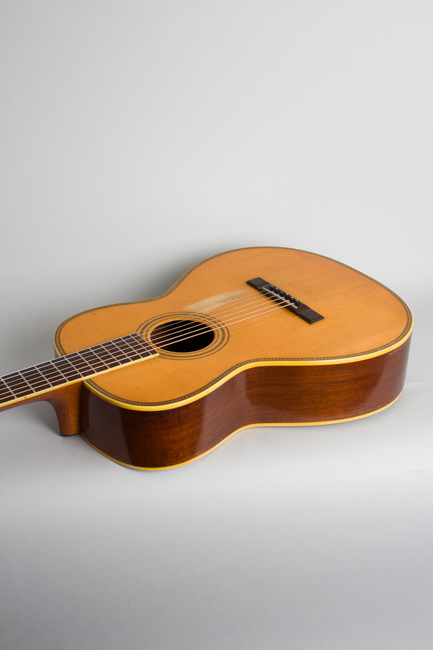 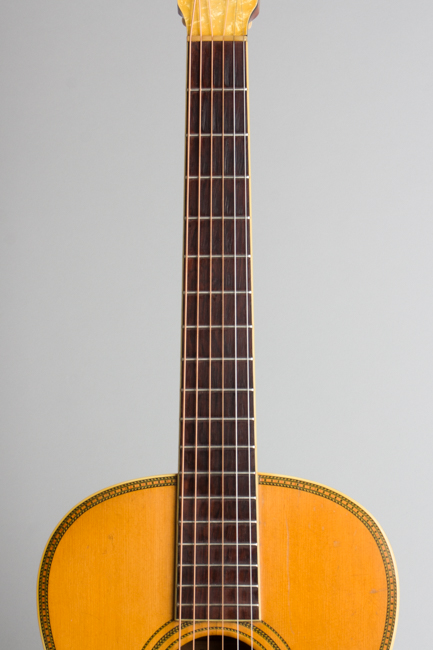 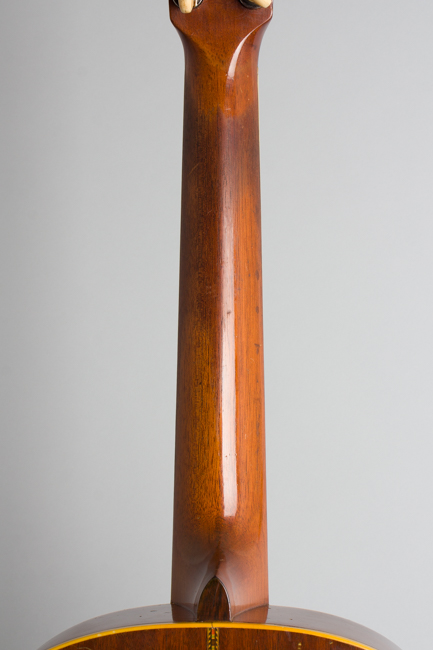 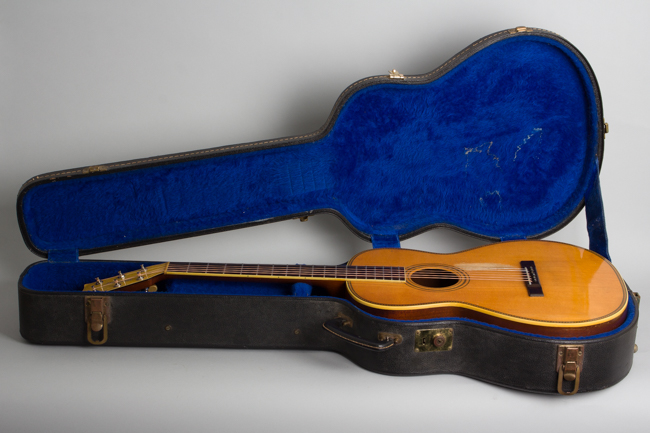 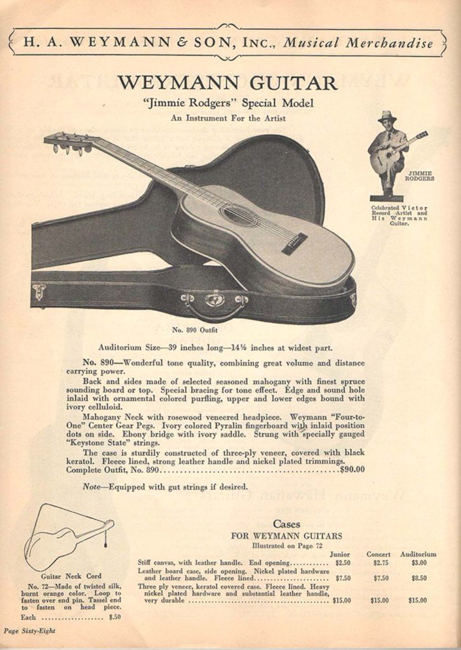 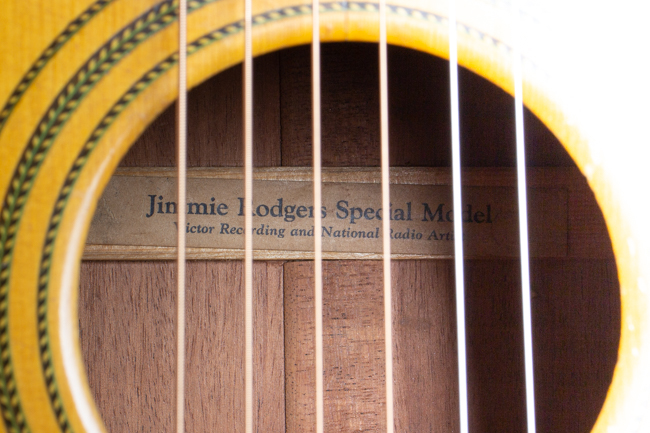 Jimmie Rodgers, the "Father of Country Music" was also the first "Hillbilly" artist to endorse a signature instrument when the Weymann company of Philadelphia introduced the "Jimmie Rodgers Special" Style 890 flat top around 1930. Rodgers was never one to miss a marketing opportunity, and since C.F. Martin (whose instruments he generally favored) did not indulge artist endorsements Weymann was the "Next Best Thing". Weymann actually built at least two custom guitars for the "Singing Brakeman's" personal use around 1928-9, and acquired the rights to use his name on this now very rare stock model.

H. A. Weymann & Son was almost as venerable a company as Martin, founded by German immigrant Henry Arnold Weymann in 1852 in Philadelphia. Originally a retail firm, they traded in goods such as jewelry and watches mostly imported from Germany. When Henry died in 1892, his son Harry William Weymann took over and steered the business into musical goods, which they began to build as well as import.

Weymann prospered with banjos and their unique "Mandolute" which like their flat-top guitars were high quality instruments, broadly similar to those of C. F. Martin & Co. or Lyon & Healy. Records indicate the Weymann store sold Martin guitars at times, so they were familiar with their Pennsylvania neighbor's designs! Weymann's earlier guitars and banjos were often sold under the "Keystone state" brand, while later models like this carry a "Weymann" gold decal on the headstock rear. The style and serial number are stamped into the headstock's top edge.

Weymann's "Jimmie Rodgers" Special Model 890 was rather different from Jimmie Rodgers' personal Weymann guitars, not as flat-out fancy but still a nicely decked-out high grade instrument. It appears in Weymann's 1931 catalog as the top of the line guitar, listing at $90 including the case. This was quite expensive, and the timing couldn't have been worse as the depression was just kicking in. The price was double that of Martin's mahogany 000-18, and $5 more than the 000-28, a rosewood guitar.

The model 890 is built on a 14 3/4" wide 12-fret mahogany body with elaborate colored wood marquetry around the bound edge of the spruce top and multi-herringbone soundhole trim. The mahogany neck has a medium "V" profile and a long 25 1/2" scale. On this one has a bound rosewood fingerboard; The catalog illustrates a pearloid board. The solid headstock IS pearloid-faced, with a diagonal "Weymann" logo decal. The banjo tuners are neatly recessed into the back of the headstock, a distinctive Weymann touch. The top is neatly X-braced and intended for steel strings; Gut was offered as an option "if desired". Oddly the only mention of Rodgers' endorsement on the instrument proper is a small paper label under the soundhole reading "Jimmie Rodgers Special Model -- Victor Recording and National Radio Artist".

Even as pre-war flat tops go this is an extremely rare guitar, with only a handful known to exist. Very few were apparently ever made and every one we have seen falls into the same small serial number range, suggesting a very short production span. Oddly enough those that have surfaced show some odd variations in features, suggesting they were individually hand made. This one is the most player-friendly version, with the easier to navigate rosewood fingerboard instead of slick (and prone to shrinkage) pearloid.

Weymann ceased instrument manufacturing instruments in 1933, after that point simply selling re-branded Chicago catalog guitars. The Jimmie Rodgers Special is their most glorious 6-string swan song, a really fine instrument all around. The sound is powerful and rich, with a bit more top end sing than many similar Martins but never lacking in depth. This is one of the few guitars of the pre-war era truly comparable to the early steel-string Martins, a fine instrument in every way and great and extremely rare piece of fretted history.

Overall this is a very nicely preserved and original guitar for its age, just about 90 years on! The thin lacquer finish is all original with some checking and typical wear, mostly superficial dings, scratches and scuffs with one conspicuous area of heavier pickwear into the top. A decent amount of the finish on the back of the neck is worn through to the wood. There are only a couple of very small grain splits on the side at the turn of the lower treble bout; the lovely tight-grained spruce top has one very tight split to the lower bass bout, neatly sealed long ago with no finish added. The rest of the guitar is crack free.

The only notable alteration to the instrument is the tuners, which are modern high grade banjo units made by Ome. The original Weymann banjo tuners are included and could be re-fitted, but the delicate gears on several of them have given up under the tension of guitar strings over the decades and are not functional. The original celluloid buttons have been fitted to the new pegs, and the guitar now tunes easily and reliably. No alterations were made to the headstock for this substitution.

Internally the very neatly done X-bracing and tiny maple bridge plate are completely intact and original. The original rosewood bridge has been lowered somewhat and the saddle replaced, but even the bridgepins remain original. The frets and bone nut remain original without much wear, and this is a very lovely sounding and fine playing guitar, originally built for steel strings and structurally completely solid 90 years along. We rarely find high grade, larger body non-Martin flat top guitars of this era and quality that are as functional and as original as this one.

This unique Weymann a delight to play with a very powerful but still responsive tone, equally suited to fingerpicking or flatpick use. The case is later; inside the pocket is a passel of ephemera from the '70s including D'Angelico brand strings, two packs of rolling papers, some random keys and an appraisal from Matt Umanov, from whom the guitar was last bought in 1972. 50 years later it has emerged again, a truly special instrument ready for a new home. Excellent - Condition.
×