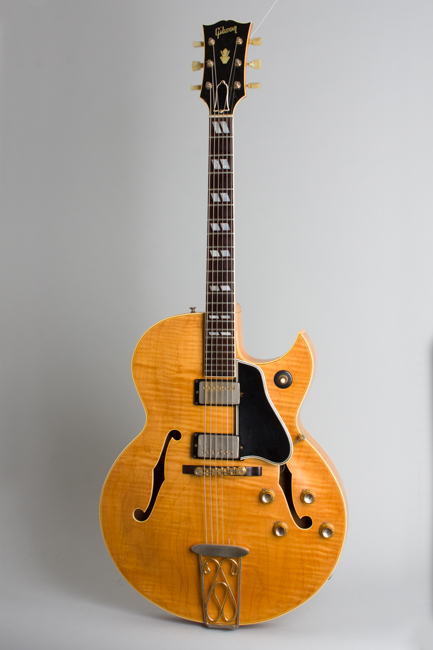 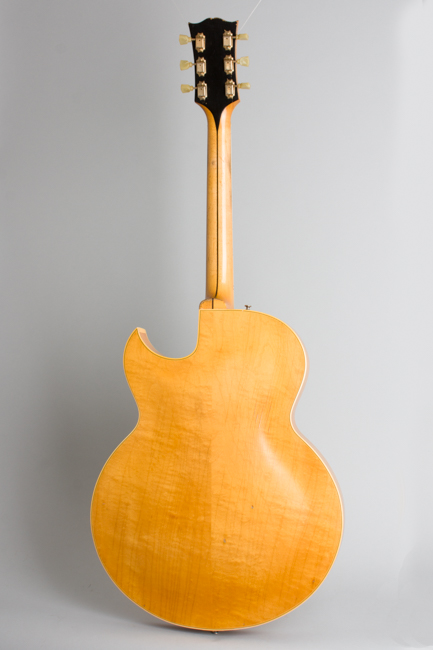 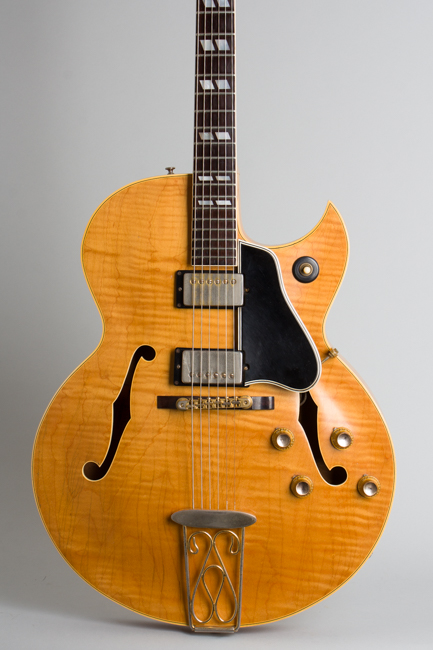 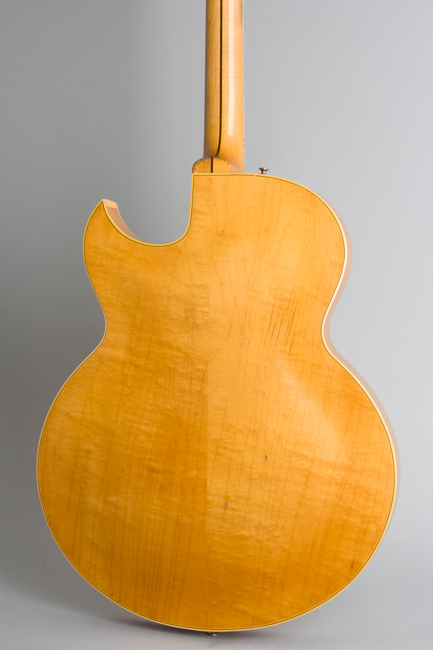 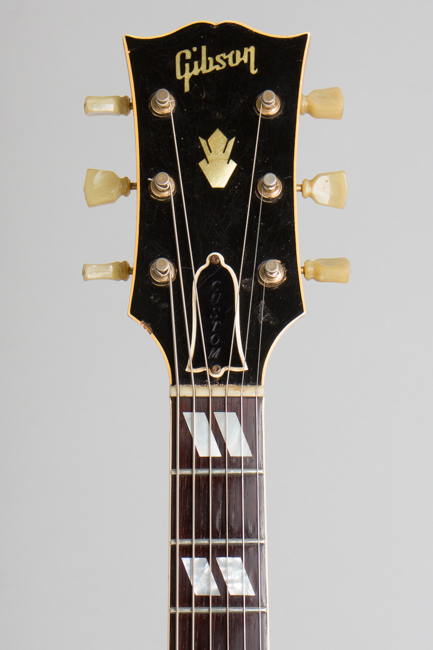 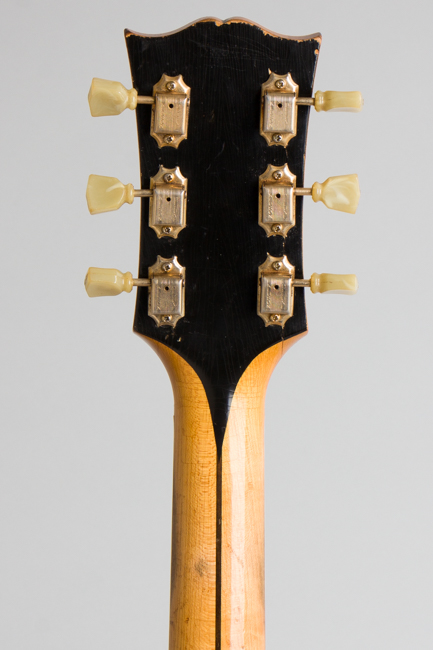 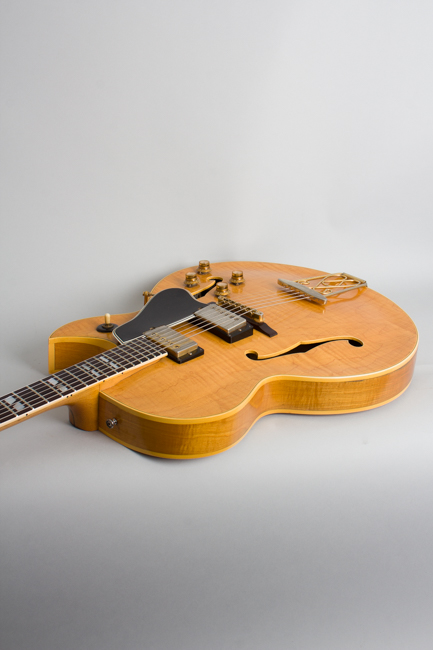 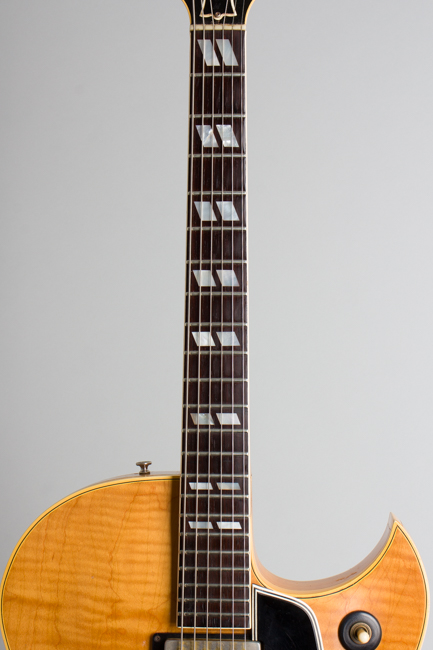 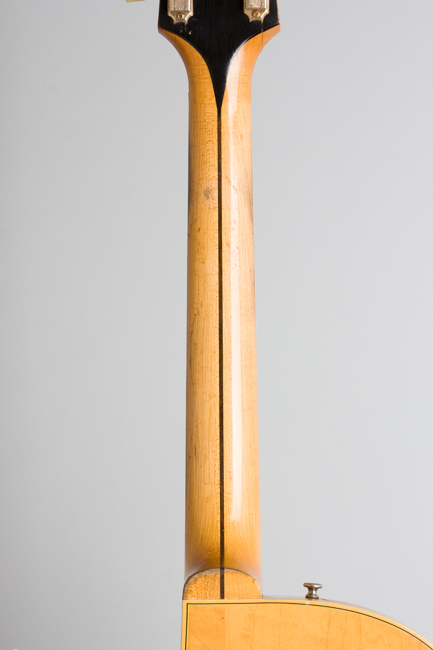 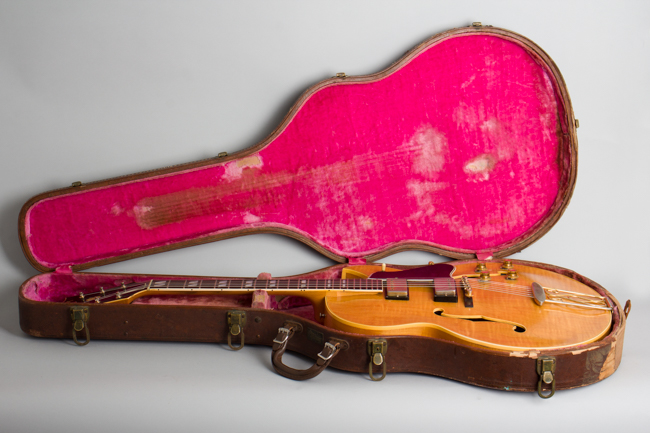 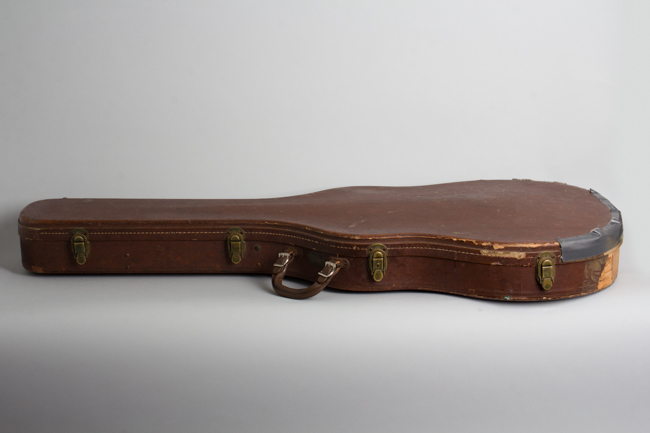 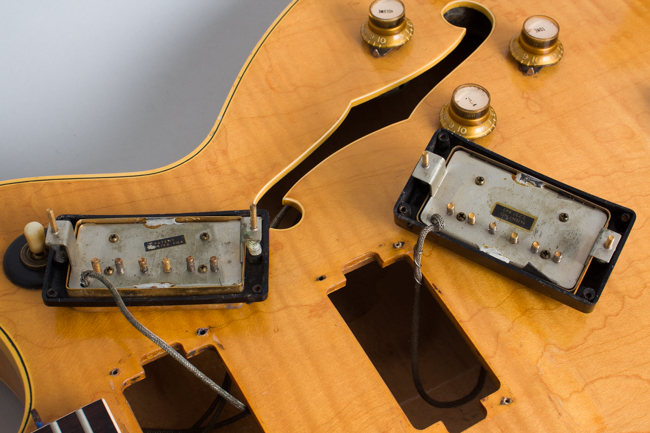 This guitar is a very rare natural example of the final version of one of Gibson's classiest thinline electrics, the ES-350T. It was built in 1962, at the end of the model's run; only 18 natural finish examples were shipped that year. After late 1960 this model was redesigned with a sharp Florentine cutaway instead of the rounded Venetian style. Gibson shipping records indicate less than 70 of these sharp-cut, natural examples were ever produced. With a nicely flamed maple top and gold hardware this guitar is certainly a looker, and with two PAF humbucking pickups it's no slouch in the sonic department either!

The ES-350T was introduced in 1955 as a "modernized" version of the ES-350, a 17" full-depth guitar which had been in production since the late 1940s. Two of the company's top Nashville endorsers, Hank Garland and Billy Byrd, had suggested that a 17" archtop guitar body should be made thinner at the rim. They also requested a thinner neck with a short 23 3/8 scale, facilitating the extended chords used by jazz greats like Tal Farlow requiring long fingerboard stretches.

The model created for them was the upscale solid-wood Byrdland, but the same formula was applied to the ES-350, resulting in the redesigned ES-350T with a thinner 2 1/4" rim and a short scale neck, built on a laminated maple body with midline ornamentation. Early in 1957 the ES-350T was one of the first guitars to be fitted with the new PAF Humbucking pickups. It was "modernized" with a sharp cutaway in 1960, but by then was outsold being heavily by the semi-solid 335 series and thus headed for oblivion.

Still, the ES-350T is a classic Gibson creation, with some of the company's iconic touches. It was a moderately high end instrument, listing in 1961-2 at $500 (plus $56 for the case) in natural finish. The 17" body and neck are built of laminated flame maple finished in gleaming natural lacquer. The body is triple-bound, the headstock single-bound with a "crown" inlay under the pearl Gibson logo. The bound rosewood fingerboard has Gibson's signature split parallelogram inlay.

All hardware is gold-plated and includes Kluson Deluxe tuners with keystone buttons, Tune-O-Matic bridge and a special looped tailpiece. These original PAF humbucking pickups have gone down in legend as some of the very best ever made, with a super touch-sensitive feel and splendid tone from clean sparkle to overdriven raunch. The 350T's slightly narrower neck means the pickups have a tighter polepiece spread than standard, making them unsuitable for Les Paul recreations and thus less likely to be robbed!

This splendid example is an excellent player, showing some use but still a fine example of the rarest variation of this model. The ES-350TN in general has a great rock and roll pedigree as Chuck Berry's main squeeze, although his were earlier round-cutaway versions. Beyond this association the ES-350T can handle anything from fluid jazz to country twang to psyched-out feedback equally well. Still, if you clang out the intro to "Johnny B. Goode", it's just like ringin' a bell.

Overall this guitar is relatively clean original condition for its 60 years on the planet, showing signs of play but no major alteration. The finish has some typical checking and scattered dings, dents and wear spots, most notably on the back. The base of the heel and the lower back rim have some wear through the lacquer. The back of the neck has some wear to the wood as well. The gold plating shows its age, mostly typical loss to the pickup covers, tailpiece and some areas of the bridge.

There are no visible cracks or structural repairs. A strap button has been added to the upper side above the heel. A scuff mark on the top indicates a Bigsby was likely fitted at some point, but the original tailpiece is back on now. There are some small marks around the base of the bridge where it looks to have been lightly glued down long ago. The cover on the bridge pickup has likely been off and back on again, possibly the neck unit as well but there is no indication they have been tampered with beyond that.

Original style period Kluson Deluxe single-ring tuners have been re-installed; the holes had been slightly enlarged for mini-Grovers but the only visible scars are slight pressure rings visible on the headstock face. There are small sealed wing separations visible on the base of the headstock rear. The headstock edge has a small cigarette burn below the low E tuner and some scratches and dings to the face. The truss rod cover is neatly engraved vertical "Custom" which appears to be factory work. It has oddly been mounted in two slightly different positions, leaving a small visible screw hole just above the nut.

The guitar has been neatly refretted with little subsequent wear. This is a really classy instrument, one beautiful piece of late PAF era Gibson greatness still housed in its original brown HSC which is quite battered (a section has been patched in on the bottom) but still fully functional. Excellent - Condition.
×