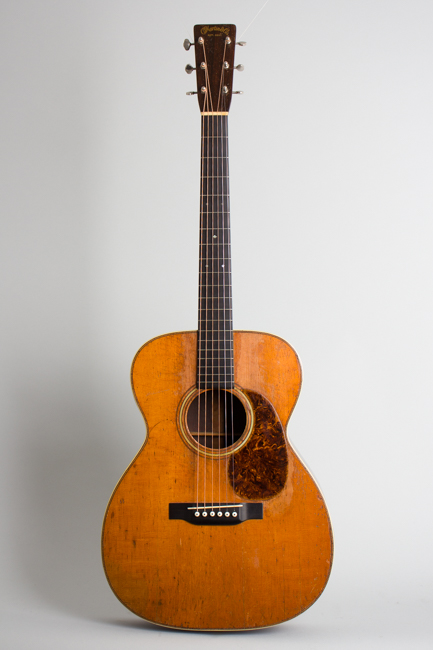 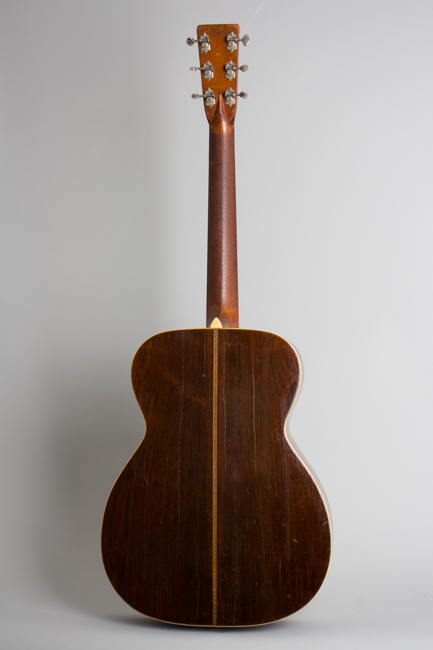 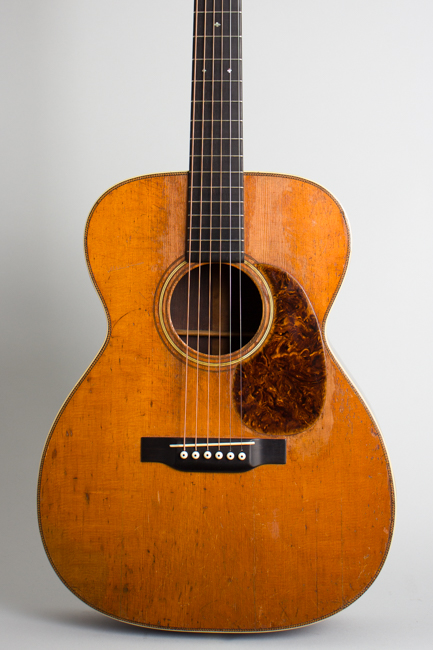 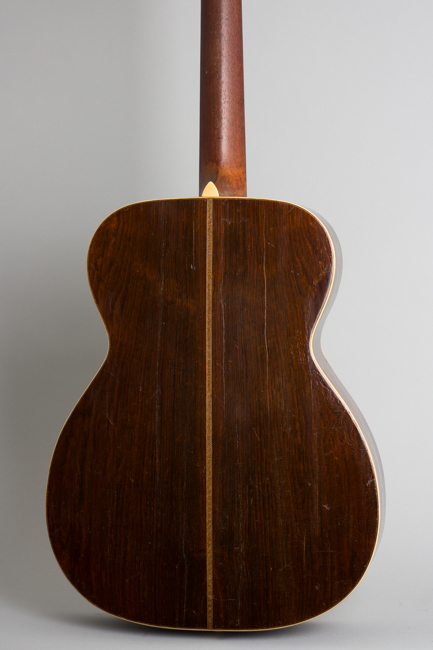 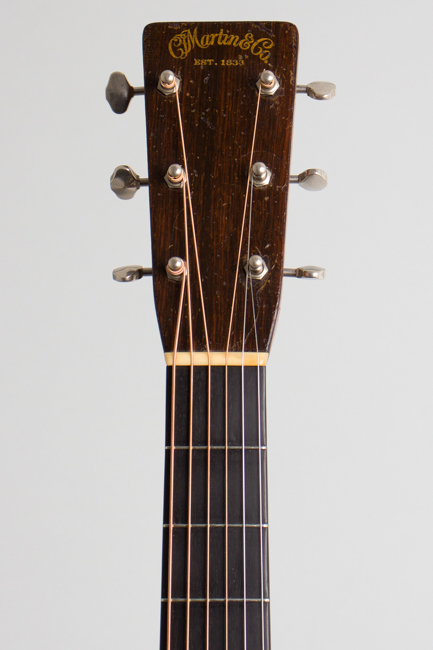 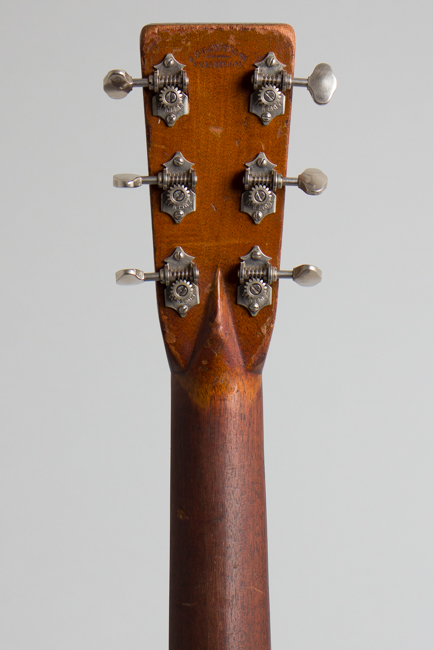 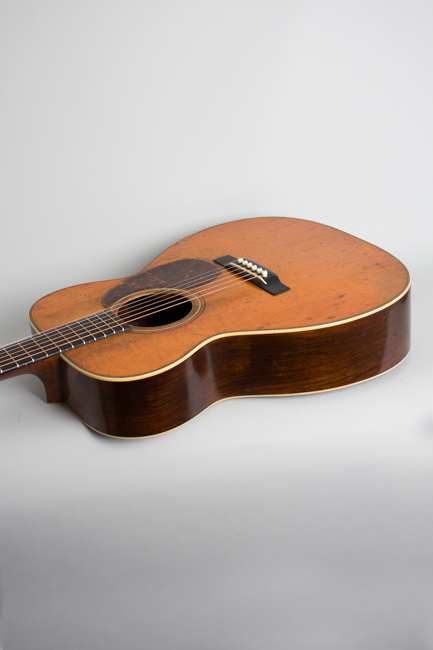 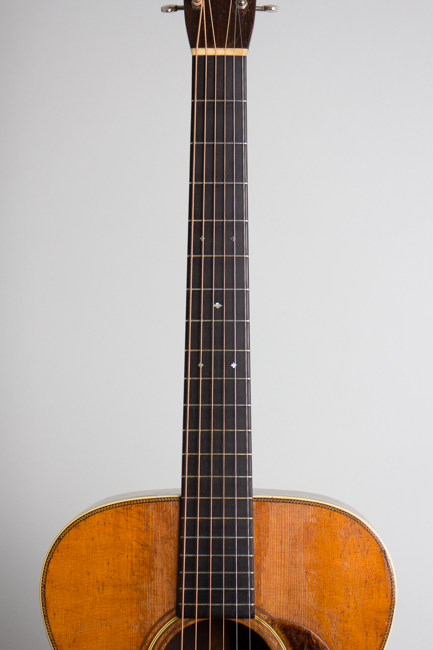 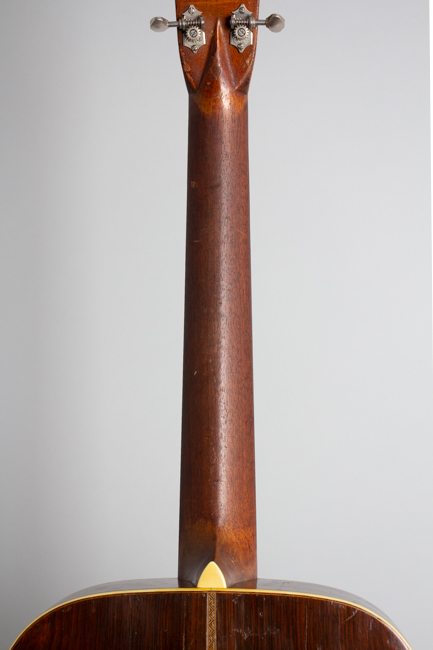 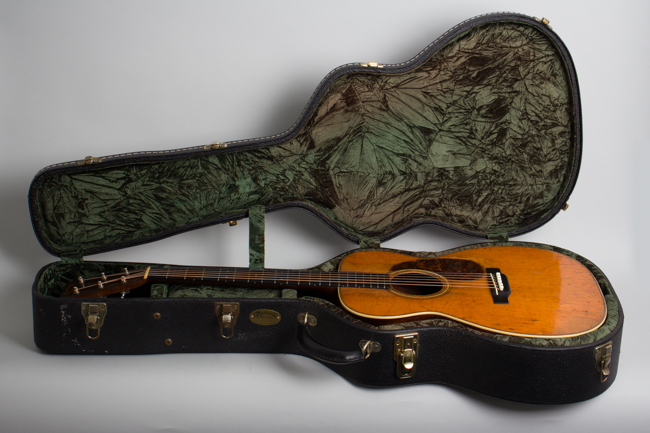 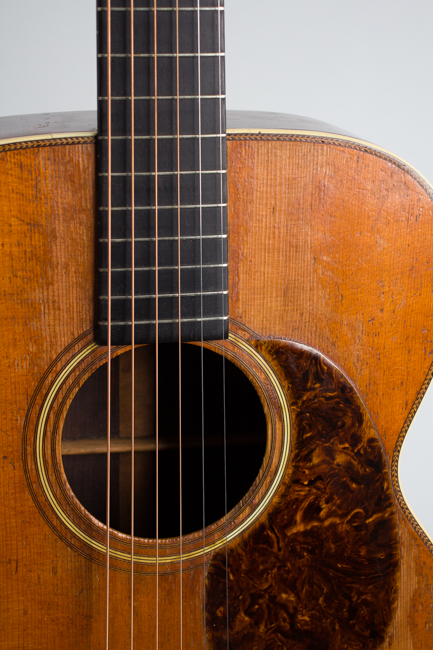 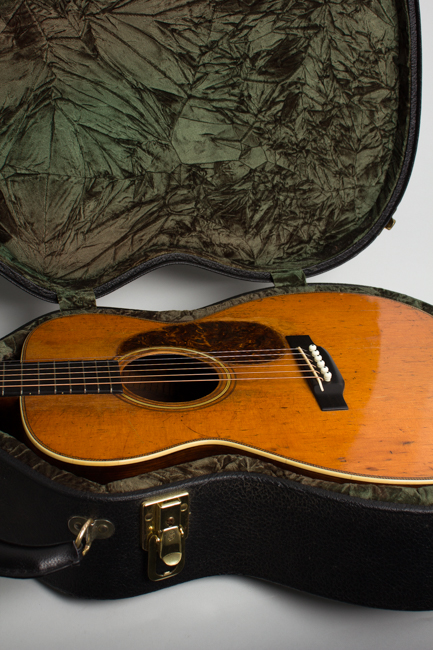 This well worn but superb guitar is one of the true delights of Martin history: an OM-28 from late 1932. This is one of the most iconic of all Martin guitars; along with its mahogany sibling the OM-18 representing the first full flowering of the "Modern" American steel-string flat top guitar. Mating a 14-fret long scale neck to a shortened 000 body created a new paradigm of flat top guitar construction that has been revered ever since. This OM-28 has the early 1930s "advanced" scalloped X-bracing on the top combined with the long scale that is the hallmark of the OM models.

This 14-fret 000-sized design was introduced in late 1929 called the "Orchestra Model" with a rosewood body and style 28 trim. It proved an immediate success, though the growing depression soon stifled sales. The more popularly priced mahogany-bodied OM-18 was launched in early 1930 and predictably sold even better. The new 14-fret design was so well received that after 1933 nearly all Martin guitars would be built to this "Orchestra Model" format. The OM designation was dropped and this 14-fret model was simply the 000-28, one of the company's mainstays ever since. Martin soon after shortened the model's scale length, making the original 1929-33 OM-28 one of the most sought-after of all pre-war Martins.

In one of those great fretted ironies the OM-28 was described in Martin's catalog as "designed for plectrum playing in orchestra work" but in later years became renowned as the greatest solo fingerstyle guitar ever built. Archtop guitars ended up ruling the "orchestra" roost, but OM's quickly became popular with cowboy, recording and radio entertainers requiring a powerful but well-defined flat top sound. Since the early 1930's the OM-28 and OM-18 have been justly celebrated as one of Martin's crowning achievements, and among the greatest flat tops ever created.

This guitar was built in late 1932, with features specific to its time. The top is trimmed with the "herringbone" marquetry that is a part of the Martin legend and bound in ivory celluloid. The back is bound as well with a chain pattern backstrip. The mahogany neck has a quite slim soft "V" profile, with an ebony fingerboard inlaid with slotted diamonds. The original tuners were Grover single openback units; earlier OM's used geared banjo pegs that often failed. This guitar still has bar frets, about to be phased out and the first silk screened gold "C.F. Martin" headstock logo, replaced soon after with a decal. The Martin stamp on the back of the headstock would also shortly disappear.

The elegant scalloping on the bracework under this top is simply beautiful to behold and demonstrates once again the incredibly high standards Martin's craftsmen maintained even in this very difficult period for the company. At the time this OM was a distinctly modern guitar design, but still built with the exemplary craftsmanship that Martin's 19th century traditions engendered.

This is quite a rare guitar; Martin produced all of 50 OM-28's in 1932 with a further 25 in '33, the last year the "OM" designation was used. The total production run was only 487 OM-28's built between 1929-33. The list price was $85 in 1933, down from the original $90; even Martin had to make guitars affordable as possible in 1931-4, the Depression's hardest years! This OM-28's lightly scallop-braced spruce coupled with the longer scale neck make for a powerful sounding, transparent but warm and superbly responsive guitar. The 15" wide narrow-waisted Brazilian body contributes both depth and clarity to the sound. This is a well-worn but still superb instrument, simply a joy to play and to hear.

This guitar has been heavily used over the last 8 decades (we'd love to know where it's been!) and while showing a hefty amount of wear and repair remains a wonderful-playing and spectacular-sounding instrument, a testament to the enduring quality of these genuine "Golden Age" Martins.

The original finish has a wide-ranging collection of dings, dents and scrapes overall. There is typical heavier play wear to the top with pick marks into the wood in all the expected places, most heavily to the soundhole rim and off the front edge of the pickguard. There are also numerous random dings, scrapes and case bites. While there are a number of small spots of touch-up and polishing the top finish has not had any wholesale overspray. The entire guitar is covered with dings, dents and scrapes and the back of the neck is almost completely worn to the wood with small dinks and dents and one deeper gouge behind the second fret.

There are a number of older crack repairs, done at various times with some dating back many decades. The lower treble bout behind the bridge shows three long grain splits, solidly sealed with tiny cleats on the lowest one and larger cleating pieces under the prominent one running from the lower bridge wing to the back edge. Both of these have light touch up as well. There are two more grain splits on the top one running from behind the E/A string area to the back edge, the other about 3/4" above the upper bridge wing. These are also solidly sealed with no cleating, with minor touch up to the upper one.

The back has numerous grain cracks, not all lined up as cleanly as one might wish but all solid, with some light cleating on several. The back shows more larger touched-up and polished out area than the top. The sides have a few small tight cracks at the turn of the lower bouts. There is no damage to the neck, just a lot of finish wear and a set of repro tuners. There is some general wear to the headstock but the screened gold "C.F. Martin" headstock logo is largely intact.

The ebony bridge looks to be an older repro; there is a super tight old crack through the pins so finely sealed it is really only visible under blacklight, There is a small maple pinhole patch over the center of the original maple bridgeplate, which is otherwise intact. What appear to be the original bar frets are in surprisingly good condition, likely worked on at some point as the fingerboard was almost certainly trued but with no noticeable signs and playing extremely well. The original bone nut is also still intact.

This "Genuine Relic" rosewood OM is both a fabulous piece of history and an exceptionally fine player's instrument now 90 years on. It's likely more than one player spent a lifetime pickin' on this guitar, and the stories in sound this one can tell are truly legion. Overall Very Good + Condition.
×